The storm caught tourists on Lake Geneva by surprise

Geneva (AFP) – A woman has drowned in Lake Geneva when her sightseeing boat sank as a violent storm battered parts of Switzerland on Saturday, police said.

A man who was in the same boat was able to swim to another vessel from where he fired „two flares”, Joanna Matta, police spokeswoman for the canton (region) of Geneva, told AFP.

The man told officers that the woman had been „passing through Geneva” and that the storm had taken them „by surprise”, Matta said.

Three police boats and emergency services rushed to the scene. Police divers later retrieved the woman’s body from the lake.

The victim, whose nationality remains unknown, was then taken to a hospital in Geneva where she was declared dead.

In a separate incident, the storm also damaged some of the 465 boats taking part in the 81st edition of the Bol d’Or, an annual regatta on Lake Geneva, the event’s press service said.

Heavy rain and strong winds lashed the participants on Saturday afternoon, causing boats to capsize although nobody was injured.

However, the storm broke the mast of the ultra-fast „Real Team” catamaran, which had been in the lead and was forced to pull out of the race.

The bad weather struck western Switzerland on Saturday afternoon, bringing hail and winds reaching up to 110 kilometres (70 miles) per hour, according to the national forecaster MeteoSwiss.

In the neighbouring French region of Haute-Savoie the storm also caused damage and left a 51-year-old German tourist dead after a tree came down at a campsite. 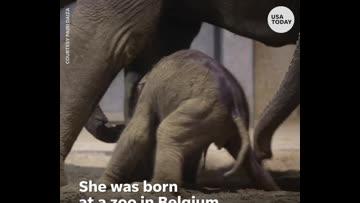 JOHANNESBURG (AP) — One of Africa’s largest wildlife preserves is marking a year without a single elephant found killed by poachers, which experts call an extraordinary development in an area larger than Switzerland where thousands of the animals have been slaughtered in recent years.

The apparent turnaround in Niassa reserve in a remote region of northern Mozambique comes after the introduction of a rapid intervention police force and more assertive patrolling and response by air, according to the New York-based Wildlife Conservation Society, which manages the reserve with Mozambique’s government and several other partners.

Monitoring of the vast reserve with aerial surveys and foot patrols remains incomplete and relies on sampling, however. And despite the sign of progress, it could take many years for Niassa’s elephant population to rebuild to its former levels even if poaching is kept under control.

Aggressive poaching over the years had cut the number of Niassa’s elephants from about 12,000 to little over 3,600 in 2016, according to an aerial survey. Anti-poaching strategies from 2015 to 2017 reduced the number killed but the conservation group called the rate still far too high.

„It is a remarkable achievement,” James Bampton, country director with the Wildlife Conservation Society, told The Associated Press. He said he discovered the year free of poaching deaths while going through data.

The last time an elephant in the Niassa reserve was recorded killed by a poacher was May 17, 2018, he said.

Political will is a key reason for the success, Bampton said, with Mozambique’s president keen to see poaching reduced.

Bampton acknowledged that the low number of remaining elephants is also a factor in the decline in poaching. A year ago, he estimated that fewer than 2,000 elephants remained in Niassa, though he now says preliminary analysis of data from a survey conducted in October and not yet published indicated that about 4,000 elephants are in the reserve.

Still, a year that appears to be free of elephant poaching in the sprawling reserve drew exclamations from some wildlife experts.

„It is a major and very important development that poaching has ceased. This represents a major success,” George Wittemyer, who chairs the scientific board for the Kenya-based organization Save the Elephants, told the AP.

The new rapid intervention police force is an elite unit that is better-armed than the reserve’s normal rangers and has „a bit of a reputation of being quite hard,” Bampton said, adding that no „bad incidents” have been reported in Niassa.

Members of the force are empowered to arrest suspected poachers, put together a case within 72 hours and submit it to the local prosecutor, Bampton said. „Just being caught with a firearm is considered intent to illegal hunting,” with a maximum prison sentence of 16 years.

Wildlife experts have seen gains elsewhere in Africa against elephant poaching. Tanzania’s Selous Game Reserve, widely acknowledged as „Ground Zero” for poaching and linked to the Niassa reserve by a wildlife corridor, also has seen a recent decline in the killings.

African elephant poaching has declined to pre-2008 levels after reaching a peak in 2011, according to the Convention on International Trade in Endangered Species.

But experts say the rate of annual elephant losses still exceeds the birth rate, and the encroachment of human settlements is reducing the animals’ range. Africa’s elephant population has plummeted from an estimated several million around 1900 to at least 415,000, according to surveys in recent years.

Collaboration and „huge effort” among the Niassa reserve’s partners has been crucial but data show that issues remain with other iconic species such as lions, said Rob Harris, country manager for Fauna & Flora International, which supports one of the operators in the reserve. „So the combination of national-level support and on-the-ground effort must be maintained to improve the situation for all wildlife.”

El Niño is forecast to continue through the summer and possibly into the fall, federal forecasters announced Thursday, which could weaken the Atlantic hurricane season.

El Niño is a periodic natural warming of seawater in the tropical Pacific. It’s among the biggest influences on weather and climate in the United States and around the world.

Specificially, in its monthly forecast released Thursday, the Climate Prediction Center said there’s a 66% chance that El Niño conditions will persist through the summer. Beyond that, however, the forecast calls for a 50-55% percent chance it will last through the fall, including the heart of the Atlantic hurricane season.

But with only a 50-55% chance of lasting through the fall, a calmer storm season is far from a slam dunk.

On the other side of the Americas, however, warm water from El Niños tend to increase hurricane activity in the eastern Pacific Ocean. Hurricanes there seldom affect land, but they can impact Mexico, the U.S. Southwest and Hawaii.

Other than its impact on hurricanes, its influence on U.S. summer weather tends to be rather weak, according to Bloomberg.

This article originally appeared on USA TODAY: El Niño forecast to continue through the summer, could knock down hurricanes

WASHINGTON – President Donald Trump doesn’t seem to be a believer of aliens or UFOs flying through Earth’s atmosphere, although he has been briefed on them.

ABC News’ George Stephanopoulos, in a wide-ranging interview, asked Trump about recent news reports about Navy pilots spotting flying objects and what he made of the apparent UFO sightings.

„I want them to think whatever they think,” Trump said, raising his eyebrows and slightly grinning before adding that he did have „one really brief meeting on it.”

„People are saying they’re seeing UFOs. Do I believe it? Not particularly,” he added.

Stephanopoulos followed up, asking the president whether he thought he’d actually know if the U.S. had any proof of extraterrestrials — a question Trump didn’t appear to actually answer directly.

„I think our great pilots would know and some of them really see things that are a little bit different than in the past, so we’re gonna see, but we’ll watch it,” Trump said, following his answer with a promise that Stephanopoulos would „be the first to know” if there was alien life.

Trump’s comments followed a number of reports chronicling how the government has examined UFO sightings and a report in the New York Timesabout Navy pilots reporting bizarre flying objects, including one that looked like a „spinning top” and another with no visible engine that could reach 30,000 feet and hypersonic speeds.

The Times report includes a number of videos filmed by Navy pilots showing the aircraft and the curiosity of the pilots who couldn’t figure out what the objects were and how they were so quick, even when they were flying against the wind. But the report makes clear that the Defense Department doesn’t believe the objects are from beyond Earth and that an explanation can almost always be found for incidents like these.

Unexplained flying objects have been seen by pilots for decades. In 2017, the Department of Defense released footage from 2004 showing Navy Pilots coming into contact with an unidentified flying object off the San Diego coast.

In an interview with the Times, one of the pilots, David Fravor, said mysterious aircraft were being investigated after appearing on radar at 80,000 feet, dropping suddenly to 20,000 feet then hovering there before dropping out of radar or shooting back up in the sky.

Fravor said he went to investigate one of the aircraft, saw it moving erratically then hovering just above the Pacific Ocean. As he got closer to the object, it zipped off.

„It accelerated like nothing I’ve ever seen,” he told the Times, adding the incident, which was never explained, left him feeling „pretty weirded out.”

This article originally appeared on USA TODAY: Trump got a briefing on UFOs, although he doesn’t ‘particularly’ believe in them

Another day of brutal heat was forecast Thursday for the Phoenix area and the entire Desert Southwest, a day after the city tied a record high of 112 degrees.

„Across the Desert Southwest, temperatures will once again reach triple digits on Thursday, resulting in another day of excessive heat warnings for portions of southern California, southern Nevada and southwestern Arizona, including the Las Vegas and Phoenix metro areas,” the National Weather Service said.

Fortunately, forecasters said the intense heat will begin to ease on Friday across the Desert Southwest, including Phoenix.

The extreme heat has already ended across most of California and Oregon, after several days of record to near-record highs in cities such as San Francisco and Portland. San Francisco hit 100 degrees on Monday for only the 7th time ever recorded, AccuWeather said.

In Phoenix, after a pleasant May temperature-wise, the metro area now is dealing with a bout of intense heat, which has resulted the excessive heat warning.

“Anyone who goes outside will notice an intense heat,” said Andrew Deemer, meteorologist with the weather service in Phoenix.

Monday and Tuesday saw highs of 109 and 108 degrees, respectively, in Phoenix.

A heat advisory, originally issued Monday, will continue through 8 p.m. Thursday, meaning temperatures could again exceed 110 degrees. According to the National Weather Service, Phoenix will experience “a high near 112” on Thursday.

Deemer said that to avoid the dangerous heat conditions, people should be prepared – including making sure they have somewhere to go should their air conditioning break down, making sure their pets are safe in the heat and having water in case a car gets a flat tire, to name a few precautions.

He said this unusually high heat wave is caused by high pressure building over the Southwest that will continue “for most of the summer.”

This year, the pressure just happened to build earlier, after an unusually mild May, he said.

Deemer said temperatures are expected to cool down on Friday – the weather service is forecasting a high of 104 degrees – which is more typical for this time of year in Arizona.

While residents are encouraged to stay hydrated and avoid prolonged periods of time outdoors, such as hiking, Deemer said one of the most important things to do is to make sure that community members are staying safe.

“Check in on family, neighbors, friends … just check in on people,” he said.