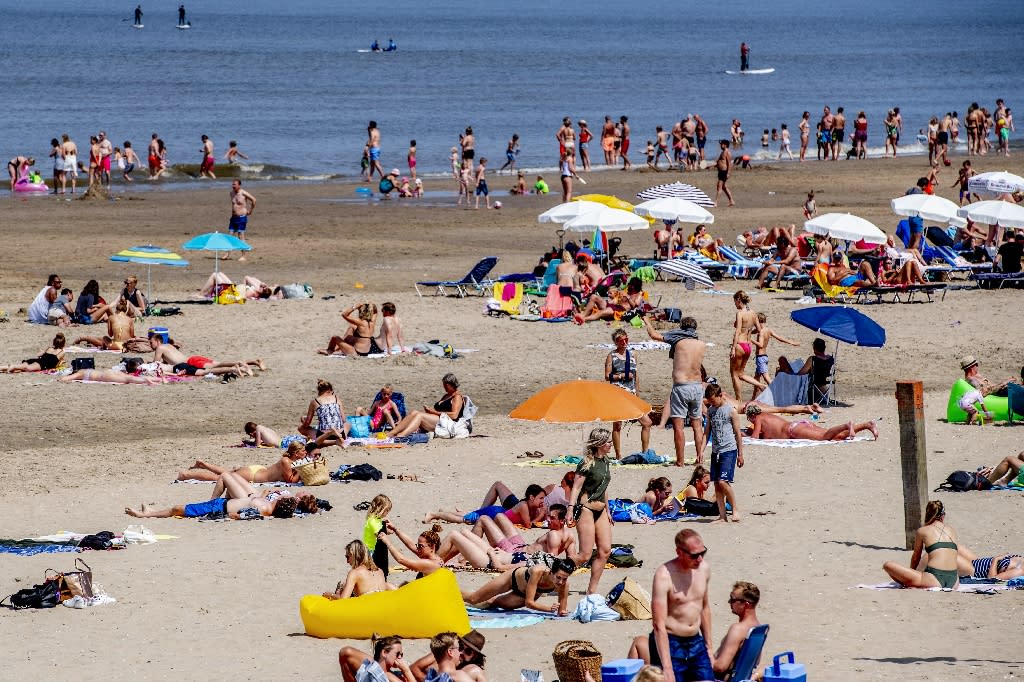 After summer got off to a slow start, Europe looks set to bake in a week-long heat wave After summer got off to a slow start, Europe looks set to bake in a week-long heat wave (AFP Photo/Robin UTRECHT)Paris (AFP) – Temperatures were climbing on Sunday as Europe braced for a blistering heatwave with the mercury set to hit 40 degrees Celsius (104 degrees Fahrenheit) as summer kicks in on the back of a wave of hot air from North Africa.Europeans are set to bake in what forecasters are warning will likely be record-breaking temperatures for June with the mercury set to peak mid-week.Hot and humid nights can be expected, officials say, with many issuing guidelines for surviving the scorcher, and local authorities and hospitals on high alert for a surge in cases of dehydration, heat-stroke and other weather-related conditions.They are also warning that the extreme heat could bring on violent storms.Spain’s AEMET weather agency issued a „yellow alert” for severe weather on Sunday, but said it expected the heat to peak later in the week with temperatures soaring over 40 degrees Celsius, particularly inland.”Temperatures may exceed 42 degrees” in the northeastern Ebro valley area from Thursday until Saturday, the agency said, indicating the heat could persist into early next week.Britain’s MetOffice said it was particularly concerned that the heatwave could trigger „violent storms” and warned Britons to expect „hot, humid and unstable” weather.It issued a severe weather warning for heavy rain and thunderstorms on Monday and Tuesday, saying the highest temperatures were expected later in the week rising into the 30s in central and southwest England.- ‘Cool rooms’ in Paris -In Germany, forecasters said they were expecting a week-long heatwave with temperatures that could break the 2015 record of 40.3 degrees, blaming it on a front of „warm air coming from the Sahara”.And after last summer’s heatwave, farmers are again fearful the high temperatures could damage crops.”Should we get tropical temperatures of 35 degrees or more, that would depress the crop yields,” farmers’ spokesman Joachim Rukwied told DPA news agency, saying grain crops had received just enough rainfall last month and were going through an „important growing phase”.And Meteo France also warned of a „hot, humid and unstable” weather front that could push the mercury up to 40 degrees from Tuesday in some parts of the country, including Paris. The authorities activated an action plan for children, the sick and elderly as well as for homeless people.

TOKYO (Reuters) – An earthquake with a preliminary magnitude of 5.5 hit eastern Japan on Monday morning, the Japan Meteorological Agency said.

The epicenter of the earthquake was off the coast of Chiba prefecture, adjacent to Tokyo, the agency said, adding that a tsunami warning had not been issued.

There were no were immediate reports of damage.

June 24 (Reuters) – An earthquake of magnitude 7.5 struck in a remote area of Indonesia in the Banda Sea on Monday, the U.S. Geological Survey (USGS) said, but there were no initial tsunami warnings.

The quake hit at a depth of 220 km (136 miles), the USGS said. There were no immediate reports of damage or injury.

The Hawaii-based Pacific Tsunami Warning Center said in a bulletin a destructive Pacific-wide tsunami was not expected after the quake, which was initially recorded with a magnitude of 7.2.

DILI, June 24 (Reuters) – A deep earthquake of magnitude 7.5 struck off the coasts of East Timor and Indonesia on Monday, the U.S. Geological Survey (USGS) said, and Pacific monitoring authorities ruled out the chance of tsunami.

Strong shaking caused alarm in the East Timor capital of Dili, prompting people to run out of their houses, a Reuters witness said, but there were no immediate reports of deaths or damage.

The quake was also felt on Indonesia’s holiday island of Bali, several people said on social media. But there were no immediate reports of damage or injury in Indonesia, said Rita Rosita, an official of the national disaster mitigation agency.

The shaking was also felt in Australia’s northern city of Darwin, about 700 km (435 miles) from the epicentre, the Australian Broadcasting Corporation said, but no damage was reported.

There is no tsunami threat because of the quake’s depth, the Hawaii-based Pacific Tsunami Warning Center said in a statement. (Reporting by Lirio Da Fonseca in Dili and Agustinus Beo Da Costa, Ed Davies, Gayatri Suroyo in Jakarta; Tom Westbrook in Sydney; Writing by Kanupriya Kapoor; Editing by Clarence Fernandez)

Scroll back up to restore default view. Severe storms turn deadly in central US originally appeared on abcnews.go.comThere were 300 damaging storm reports from Colorado to South Carolina on Friday, with two deaths reported in severe storms as well.One person died when a tree fell on a car in Ullin, Illinois, while another person died in Van Buren, Missouri, after a tree fell on a boat, according to the National Weather Service.There were over 140,000 people without power in Kentucky, Tennessee, Georgia and South Carolina on Saturday morning.Unfortunately, more severe storms are expected for a huge part of the country from the Plains into the Southeast Saturday.The biggest threat for tornadoes will be in the Plains from Oklahoma City to Wichita, Kansas, but an isolated tornado in the Southeast is possible.PHOTO: Severe storms are possible in the Plains, and into the Southeast, on Saturday. (ABC News)More severe storms are expected Sunday in the Heartland — from Dallas to Oklahoma City to St. Louis — where damaging winds and hail are the biggest threat.

With all the severe storms, heavy rain is expected. Seven states, from Oklahoma to Kentucky, are under flood alerts Saturday.

Forecast models show up to half a foot of rain in Oklahoma, Texas and Arkansas and possible flash flooding over the next few days.