Asian markets slip as G-20 meeting kicks off in Japan

Traders’ bets on an interest rate cut were emboldened by Fed chairman Jerome Powell saying earlier this month that policymakers are watching developments in trade disputes closely, and that they were ready to take action if the economic outlook didn’t improve. This message helped push the S&P 500 to an all-time high (paywall). In fact, the gains for the US benchmark index in June were the best for a June since 1955, according to Howard Silverblatt, a senior index analyst at S&P Dow Jones Indices.
While the central bank rate-setting committee considers more than just trade policy—inflation and employment data published over the next few weeks are incredibly important—the trade truce slightly reduces the pressure to take action. It certainly limits the prospects of a 50-basis-point cut. A repricing of policy expectations by investors could take some of the wind out of the market rally.David Page, senior economist at AXA Investment Managers, wrote in a note today:“While the Fed is likely to provide additional accommodation to offset the effects of trade uncertainty on US sentiment, it is likely to want to wean markets from expectations for four cuts over the coming year. With today’s upbeat news likely to reduce some of the downside risks, we forecast just two cuts this year.”Of course, we’ve been here before, with a trade truce, a period of calm, and then a sudden escalation by Trump. That could happen again. Also, the current agreement doesn’t roll back any of the tariffs that are already in place. Given the highs of the US stock market—a metric important to Trump—there’s less pressure on the US administration to ease off of China. In all, large uncertainty still remains about US trade policy, which will be enough for many investors to cling to their bets that a rate cut is still coming, if not in July then in September, which could keep markets buoyant for longer. As traders weigh the economic good news against expectations for the Fed’s policy, markets might end up doing very little when they open on Monday.
The Latest: Trump, China’s Xi to talk trade at G-20 summit

Both the U.S. and China are signaling a desire to de-escalate the year-long conflict, yet seem unwilling to compromise.

The meeting will take place on the sidelines of the international Group of 20 summit.

Democrats are criticizing an off-handed comment President Donald Trump made about election meddling during a meeting with Russian President Vladimir Putin on the sidelines of a summit in Japan.

After a reporter asked Trump if he was going to warn Russia not to meddle in the U.S. election, Trump turned to Putin and jokingly said: „Don’t meddle in the election.”

The Senate’s top Democrat, Chuck Schumer, says the joke is on America and Putin is the only one laughing. Schumer says Trump is giving Russia a green light to interfere again in 2020.

Peskov says Trump reacted „positively” to the invitation at the two leaders’ meeting on the sidelines of the Group of 20 nations’ summit in Osaka. Peskov says a formal invitation would be sent shortly.

The Kremlin spokesman says that during their meeting, Trump and Putin discussed ways to improve economic times, arms control, China, Syria and Turkey.

After a reporter at an international summit in Japan asked Trump if he was going to warn Russia not to meddle in the U.S. election, Trump turned to Putin and jokingly said: „Don’t meddle in the election.”

The off-handed comment came during the two leaders’ first meeting since special counsel Robert Mueller concluded that Russia extensively interfered with the 2016 campaign.

Trump said Friday that Brazil has many of the world’s assets and he looks forward to the trip. He didn’t say when it would be.

Bolsonaro, dubbed the „Trump of the Tropics” after he emulated Trump to win election last year, told Trump he supports his re-election. The leaders met on the sidelines of the Group of 20 summit in Osaka, Japan.

Trump answered several questions about his meeting Saturday with Chinese President Xi Jinping and said he thinks it will be productive. The U.S. and China are locked in a trade war.

Trump says he hasn’t promised to hold off on new tariffs on Chinese goods.

White House senior adviser Ivanka Trump will speak about women’s economic empowerment at a special event during the Group of 20 summit in Japan.

The White House says President Donald Trump’s daughter plans to speak Saturday at an event being held a summit session on women’s participation in the workforce. She was invited by Japanese Prime Minister Shinzo Abe, host of the summit in Osaka, and will appear with Queen Maxima of the Netherlands, with whom she has worked closely on the issue.

Ivanka Trump will discuss how the Trump administrations recently launched initiative on Women’s Global Development and Prosperity will marshal government and private support to empower women economically around the world.

The two are meeting Friday on the sidelines of the Group of 20 summit in Osaka, Japan. It’s their first meeting since a federal investigation in the United States documented extensive evidence of Russian meddling in the 2016 U.S. presidential election. It’s also their first time face-to-face since a Helsinki summit last July in which Trump refused to side with U.S. intelligence agencies over his Russian counterpart.

(Bloomberg) — Terms of Trade is a daily newsletter that untangles a world embroiled in trade wars. Sign up here.

The U.S. and China declared a truce in their trade war on Saturday, as Donald Trump said he would hold off imposing an additional $300 billion in tariffs and the world’s two largest economies agreed to resume negotiations.

Trump outlined the deal at the end of the Group of 20 summit in Osaka, Japan, before heading to Seoul. The White House released no details about the arrangement worked out by the two leaders. The president’s comments may remove an immediate threat from a trade war looming over the global economy even as a lasting peace remains elusive.

After Trump and Xi met at the G-20, the two governments plan to restart trade talks that broke down last month. As part of the arrangement, the president said Xi promised to buy “tremendous” amounts of U.S. agricultural products, but Chinese official media reports said only that Trump hopes China will import more American goods as part of the truce.

The existing U.S. tariffs on Chinese products will remain unchanged, Trump tweeted on Sunday from Seoul, his next stop for meetings with South Korean President Moon Jae-In.

The decision to ease up on tariffs comes less than two weeks after he formally began his 2020 re-election bid, focusing on a strong U.S. economy and his tough stance with the rest of the world. At his June 18 campaign event in Florida, Trump said tough U.S. measures were adding billions to the Treasury and prompting companies to leave China to avoid the fees.

While the resumption of U.S.-China talks was welcomed, International Monetary Fund Managing Director Christine Lagarde warned that the global economy is in a “rough patch” with unresolved issues on trade posing the most serious risk for the future.

“Tariffs already implemented are holding back the global economy, and unresolved issues carry a great deal of uncertainty about the future,” she said in a statement.

Trump told reporters he wouldn’t put additional tariffs on China for the “time being,” and that he’ll allow U.S. companies to supply gear to Huawei. The Commerce Department last month blacklisted the company for national security reasons.

The Trump administration has been lobbying allies around the world not to buy Huawei equipment, which the U.S. says could be used for Chinese espionage. The company has denied the allegation. China has said it wanted Huawei removed from Commerce’s blacklist as soon as possible and has accused the U.S. of unfairly using state power to harass a private company.

“U.S. companies can sell their equipment to Huawei,” Trump said. “We’re talking about equipment where there’s no great national security problem with it.”

Trump didn’t suggest he was relenting on plans to ban the import of Huawei equipment for new U.S. 5G telecommunications networks, which is the top concern of intelligence agencies.

Huawei reacted positively to the news on its verified Twitter account: “U-turn? Donald Trump suggests he would allow #Huawei to once again purchase U.S. technology!”

“Huawei is one of few potent levers we have to make China play fair on trade,” Schumer said Saturday in an emailed statement. “If President Trump backs off, as it appears he is doing, it will dramatically undercut our ability to change China’s unfair trades practices.”

Senator Marco Rubio a Florida Republican, suggested legislation would be passed — with what he said is a veto-proof majority — to keep the limits in place.

The return to the negotiating table ends a six-week stalemate that has unnerved companies and investors, and at least temporarily reduces fears that the world’s two largest economies are headed into a new cold war. Still, it’s unclear whether they can overcome differences that led to the collapse of a previous truce reached at the G-20 in November. 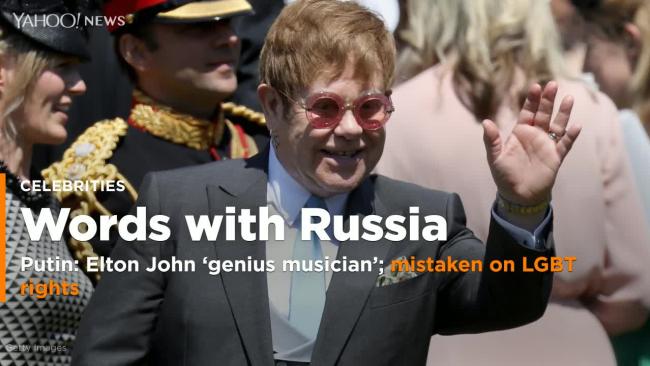 OSAKA, June 29 (Reuters) – Russian President Vladimir Putin said on Saturday that Elton John was „mistaken” about LGBT rights in Russia, while praising the British singer as a musical genius.

Elton John said on Friday he was deeply upset by Putin’s comment that liberal values were „obsolete” and had been rejected by the majority of people in Western nations.

He also accused Putin of hypocrisy for saying that he wanted LGBT people to be happy after reports that gay scenes in „Rocketman”, the movie based on the singer’s life, had been censored in Russia.

„I have a lot of respect for him, he is a genius musician, we all enjoy his music, but I think he is mistaken,” Putin said when asked about Elton John’s comments in Osaka where he was attending a G20 summit.

Putin said Russian authorities had a „relaxed and unprejudiced” attitude towards LGBT people, but decisions about gender identity could only be made by adults and therefore minors need to be „left alone”.

Putin also said that while he did not deny the attractiveness of liberal values in general, he was referring to situations where they impinged on traditional lifestyles. (Reporting by Katya Golubkova; Writing by Olzhas Auyezov; Editing by Alexander Smith)

HANOI (Reuters) – Vingroup JSC, Vietnam’s biggest-listed firm by market value, said on Friday it had signed a deal with Qualcomm and a unit of Japan’s Fujitsu Ltd to produce 5G smartphones in the country.

The Vsmart phones will be manufactured at its factory in the capital city of Hanoi and will be sold in the U.S. and European markets from April next year, Vingroup said in a statement.

Earlier this month, the company started construction of the factory that can produce 125 million units a year..

Vingroup launched Vsmart brand in December last year, seeking to win market share from popular brands Samsung and Apple in Vietnam, which has a population of 95 million people.

The company began selling Vsmart phones in Spain in March and plans to expand into other European markets. Its phones went on sale in regional neighbor Myanmar last month.

The Trump-Xi meeting on Saturday went better than expected, offering hope for the stock market rally and specific stocks and sectors. President Donald Trump said he would ease the Huawei ban to revive China trade talks That’s good news for Huawei chipmakers such as Micron Technology, Qualcomm and Intel. A China trade war cease-fire also is promising for Apple stock as well as U.S.-listed Chinese companies such as Alibaba. President Trump and Chinese President Xi Jinping agreed to a cease-fire on new tariffs, which is largely what the stock market had expected.