Heavy rainfall flooded the intersection of 15th Street and Constitution Ave., NW stalling cars in the street, Monday, July 8, 2019, in Washington near the Washington Monument. (Photo: Alex Brandon/AP)A dangerous flash flood emergency hit Washington D.C. during the Monday morning commute.With up to three inches of heavy rain falling in the region, the National Weather Service said the area was already seeing significant flash flooding.”Travel will be extraordinarily dangerous,” the National Weather Service warned on Twitter. „Stay out of low areas, if in a low area that may flood, seek higher ground. Stay off the roads if at all possible. This is not the ‘usual’ flooding.”The weather has halted Amtrak trains traveling south of D.C. The flooding comes as a new storm system develops in the Rockies, which will move east Monday.The biggest threat with these storms Monday will be damaging winds, large hail and an isolated tornado. (GMA-ABC News)See more news-related photo galleries and follow us on Yahoo News Photo Twitter and Tumblr.

Flooding is seen in the basement of the White House briefing room in Washington, D.C, on July 8, 2019, as widespread dangerous flash flooding was occurring throughout the DC metro area, including in downtown Washington DC. (Photo: Nicholas Kamm/AFP/Getty Images)

A park bench and sidewalk are flooded from the rising high tide on July 2, 2019 in Washington, D.C. (Photo: Mark Wilson/Getty Images)

A Uniformed Division Secret Service officer looks up at the rain as he takes shelter in a doorway of the Treasury Building, Monday, July 8, 2019, in Washington. (Photo: Alex Brandon/AP)

The earthquake that recently shook residents of California, was powerful enough to leave a crack visible in satellite images.

As people in southern California communities such as Ridgecrest, continued to clear up from two of the biggest earthquakes in decades, scientists revealed the quake had left large cracks in some locations.

“Ridgecrest earthquake before (4th July) & after (6th July) images from Doves, clearly showing surface rupture,” tweeted Will Marshall, the CEO and founder of Planet Labs, referring to one of the company’s satellites.

The San Francisco-based company says its mission is to continuously monitor the entirety of the planet.

“With 150+ satellites in orbit, Planet is able to image anywhere on earth daily at 3 metre and 72 centimetre resolution,” says its website.

Saturday’s quake, with a magnitude of 7.1, jolted much of California, cracked buildings, set fires, broke roads and caused several injuries while seismologists warned that large aftershocks were expected to continue, according to reports.

The epicentre was close to the city of Ridgecrest, about 140 miles north east of Los Angeles.

The quake – preceded by Thursday’s 6.4-magnitude temblor in the Mojave Desert, was the largest in southern California for at least 20 years. 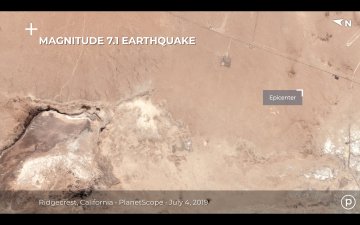 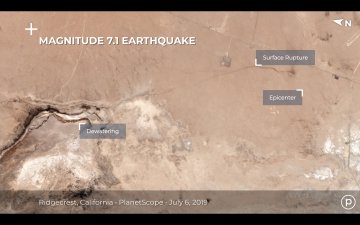 It was followed by a series of large and small aftershocks, including a handful above magnitude 5.0.

On Monday, officials said it could be several more days before water service was restored to the desert town of Trona, where officials trucked in portable toilets and showers.

Ten residences in Trona were listed as uninhabitable and officials expected that number to rise as inspectors complete more surveys of the area.

California is spending more than $16m to instal thousands of quake-detecting sensors statewide that officials say will give utilities and trains precious seconds to shut down before the shaking starts.

Governor Gavin Newsom said it was time for residents to help, by mapping out emergency escape routes and preparing earthquake kits with food, water, lights and other necessities.

“It is a wake-up call for the rest of the state and other parts of the nation, frankly,” he said.

„We can recognize a bit of the nose, payload bay and tail of this mini-shuttle, with even a sign of some smaller detail,” Vandebergh told Space.com.

Vandebergh had been hunting for the robotic spacecraft for months and finally managed to track it down in May 2019, according to Space.com reporter Leonard David. But it took a few more weeks to actually photograph the roughly 29-feet-long robotic shuttle.

„When I tried to observe it again [in] mid-June, it didn’t meet the predicted time and path,” Vandebergh told David. „It turned out to have maneuvered to another orbit. Thanks to the amateur satellite observers’ network, it was rapidly found in orbit again, and I was able to take some images on June 30 and July 2, [2019].”

Boeing built at least two X-37Bs for the Air Force in the mid-2000s reportedly at a cost of around a billion dollars apiece. While it looks like a miniature version of NASA’s Space Shuttle, which retired from service in 2011, the X-37B essentially is a small, reusable and maneuverable satellite with a shorter per-mission endurance compared to single-use satellites.

The Air Force describes the X-37B as an “orbital test vehicle,” or OTV.

The X-37B blasted off for its first mission on a United Launch Alliance Atlas rocket in April 2010. Where many satellites can function for up to a decade in orbit, the X-37B’s longest mission as of early 2018 was its fourth, beginning in May 2015. It lasted 717 days.