News US braces for second day of scorching weekend temperatures

People across much of the US have been urged to stay hydrated, watch out for the sick and elderly, stay inside as much as possible and not leave children or animals in cars

People across much of the US have been urged to stay hydrated, watch out for the sick and elderly, stay inside as much as possible and not leave children or animals in cars (AFP Photo/Johannes EISELE)Washington (AFP) – Americans braced for a second — and equally scorching — day of dangerously hot weather Sunday, with daytime temperatures forecast to approach 100 degrees Fahrenheit (38 degrees Celsius) across a number of major US cities.An oppressive heat wave stretching from the Midwestern plains to the Atlantic coast had nearly 150 million people struggling to stay cool amid stifling temperatures Saturday.”The temperatures we’re seeing in our city today and tomorrow could be the highest we’ve seen in years. Take it seriously,” New York Mayor Bill de Blasio said on Twitter.The heat was expected to continue through late Sunday as a high-pressure system off the Atlantic coast ushered in steamy, subtropical air.”Dangerously hot conditions will continue through Sunday,” the National Weather Service (NWS) warned for the Washington and Baltimore area, where forecasters predicted high temperatures ranging from 95 to 100 degrees for a second day.”High temperatures and humidity could quickly cause heat stress or heat stroke if precautions are not taken,” the NWS added.People were urged to stay hydrated, watch out for the sick and elderly, stay inside as much as possible and not leave children or animals in cars.The heat wave already claimed at least three lives, including two earlier in the week in the eastern state of Maryland.In Arkansas, 32-year-old former NFL player Mitch Petrus died of heatstroke Thursday after working outside his family’s shop.Heat warnings have also been issued for parts of eastern Canada. In New York, de Blasio declared a heat emergency.The New York City Triathlon, which had been scheduled for Sunday, was cancelled for the first time since its founding in 2001. Meanwhile the two-day OZY Fest — a food, comedy and music festival set for Central Park — was also called off.In Washington, a popular weekly outdoor summer jazz concert at the National Gallery of Art Sculpture Garden was cancelled.- Triple digits -New York City opened 500 cooling centers for residents.At least three public defenders said on Twitter that inmates in New York’s notorious Rikers Island jail complex were suffering with no air conditioning, and that some guards had turned off fans as punishment, resulting in „deadly conditions.”The Brooklyn Defender Services legal aid group said some inmates didn’t have summer clothing, only long underwear provided by the group last winter.Top officials from the city’s Department of Corrections were at the facility monitoring the response to the heat wave to „protect health and safety of everyone in the facility,” de Blasio wrote on Twitter.The department said in a statement to AFP that extra staff were on hand to distribute summer clothing, and clinics were open around the clock to treat heat-related symptoms.Those in units without air conditioning were given access to fans, ice, water and „multiple cool showers.”The city’s electrical grid was so far handling the extra demand, which came just a week after a major outage, blamed on mechanical problems, left tens of thousands of Manhattan residents in the dark.Triple-digit temperatures in the US northeast are unusual.The Philadelphia Inquirer suggested, tongue in cheek, that locals might want to seek relief in normally sweltering Miami or Phoenix, which would be up to 25 degrees cooler. Forecasters said temperatures in the city would potentially reach 100 degrees Fahrenheit Sunday.In Boston, where the weather service said that Saturday and Sunday would be „major scorchers,” city officials scrapped entry fees at public pools.Earlier in the week, the National Weather Service office in the Midwestern city of Omaha baked a tray of biscuits — savory breakfast bread similar to scones — on the dashboard of a parked car. After nearly eight hours and with temperatures on the pan reaching 185 degrees, the pastries were almost fully cooked.Climate data showed June was the hottest month on record worldwide, with a heat wave across Europe smashing national records.bur-bbk-acb-bfm/gle

NEW YORK (Reuters) – A gargantuan heat wave hunkered down over the central and eastern United States on Saturday, sending residents to cooling centers and inflicting on Washington a heat index of 106 degrees F (41 C) with even steamier conditions in the forecast.

„It’s pretty hot right now from the Plains states all the way through the Mississippi Valley to the East Coast,” said Alex Lamers, a meteorologist with the National Weather Service’s Weather Prediction Center.

Heat is the deadliest of all weather phenomena, according to the weather service, and cities from Chicago to New York urged residents to seek refuge at cooling centers set up in locations ranging from libraries to shopping malls.

About 250 senior citizens returned home on Saturday a day after having to leave a retirement community in Philadelphia when a power failure disabled the air conditioners, forcing many of them into a shelter at West Philadelphia High School, said city spokeswoman Deana Gamble.

Nighttime temperatures have remained so high in the heat wave, which started midweek in the Midwest, that Rockford, Illinois, for the first time since 1918 matched its all-time record by failing to fall below 80 degrees F (27 C) on Friday.

„Heat stress tends to have a cumulative effect so if you’re not recovering at night, especially if you don’t have an air conditioning unit, you’ll accumulate more heat stress,” Lamers said.

„When it stays warm overnight, it provides a higher launch for temperatures the next day,” he added.

Some outdoor activities, including the New York City Triathlon and a running race outside Washington, were canceled. Others bent their rules to keep attendees cool and safe, including Yankee Stadium, which allowed fans to bring their own bottled water and shading umbrellas and offered hydration stations on all levels of the ballpark.

Sizzling temperatures were expected to persist through Sunday, but relief is in sight, Lamers said.

„A cold front north of us will start shifting south and by Sunday evening, it will make progress toward Boston, Pittsburgh, St. Louis. By Monday morning, it might be reaching Washington, Cincinnati with some rain and thunderstorms,” he said.

(Reporting by Barbara Goldberg in New York; Editing by Will Dunham)

The scorching heat wave across the country could affect up to 200 million Americans, from the Midwest to the East Coast, and is already responsible for at least six deaths, authorities say.

Four people died in Maryland from heat-related causes, one person died in Arizona, and another in Arkansas, with temperatures averaging from the mid 90s to lower triple digits, according to CBS News. However, the heat index increases the overall temperature to 100-115 degrees, with the record-high temperatures set to last through the weekend.

States from Massachusetts to Minnesota are feeling the oppressive heat, with a cluster of severe thunderstorms throughout east-central Minnesota on Saturday, according toCBS Minnesota.

The region is under a flash flood warning until 7 p.m. Saturday evening.

CBS Minnesota meteorologist Mike Augustyniak said residents should treat the flash flood advisory as a tornado warning, due to the atmosphere being more charged up Saturday than it was on Friday.

RELATED: A Major Heat Wave is on the Way — Here’s How to Stay Cool and Safe

HEY WINONA heads up: A SEVERE T-STORM with a history of producing 65 mph wind gusts is about 10 mins away. Get into your shelter now; this is a dangerous storm that has produced a swath of damage across southern #MNwx already, and could cause flooding 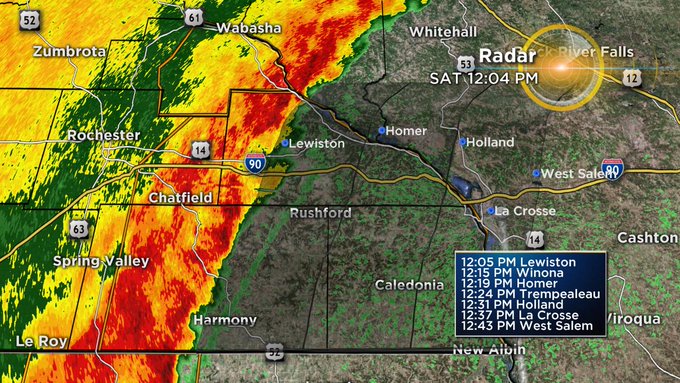 Meanwhile, police in Braintree, Massachusetts, jokingly warned potential criminals to refrain from engaging in criminal activity during the heat wave due to the extremely high temperatures.

The Braintree Police Department’s post continued, “Stay home, blast the AC, binge ‘Stranger Things’ Season 3, play with the face app, practice karate in your basement We will all meet again on Monday when it’s cooler.”

Meanwhile, officials in Washington D.C., as well as dozens of other U.S. cities, have activated a heat emergency plan.

“This is going to be one of the most severe heat events that we’ve had in the last several years,” Rodriguez said.

The East Coast will bear the brunt of the dangerous heat wave, however, cities in the Midwest will be affected as well, with doctors and health officials warning of heat illness symptoms, ranging from headaches and nausea.

The United States and Europe are bracing for extreme heat this week as several countries face an incredible rise in temperatures.

Nearly 150 million people across the US are facing hazardous temperatures, and heat warnings have been issued in parts of eastern Canada.

In the UK, temperatures could reach highs of 33 degrees on Tuesday, with Met Office forecasters warning of thunderstorms and several uncomfortable nights of sleep.

Southern England will have the hottest weather in the early part of the week, while heat builds across continental Europe with temperatures climbing to the mid-30s and even early 40s.

Climate data showed June was the hottest month on record worldwide, with a heatwave across Europe smashing national temperature records.

June temperatures across the continent were 3 degrees hotter than the baseline average between 1850-1900, the European Union’s Copernicus Climate Change Service said.

Europe’s heatwave was likened to “hell” when temperatures surpassed 40 degrees. France and the Baltic region saw a spike in drownings as crowds flocked to rivers and lakes to cool down.

In the United States, this week’s extreme heat could potentially break records and claim lives as temperatures rise rapidly along the East Coast through to the Midwest.

„Saturday is going to be really, really bad, on through Sunday,” Mr de Blasio said in a warning to the city.

„Take care of yourself, don’t go out in the heat if you don’t need to… This is serious, serious stuff.”

Sign up for the Yahoo Sports newsletter. Get all the sports news you need, direct to your inbox.By subscribing, you are agreeing to Yahoo’s Termsand Privacy Policy

After a week of rather favorable weather, Sunday’s ominous predictions for Royal Portrush have officials, players and fans scrambling

PORTRUSH, Northern Ireland — For fans who enjoy “British Open” weather, you’ll be in for a treat on Sunday. We’re not sure players are going to be feeling the same, however.

After enjoying mostly comfortable conditions throughout the week at Royal Portrush—there’s been more sun than rain, uncommon in this event—the forecast for the final round at the Open Championship is far less lovely.

Rain is expected to arrive late in the morning, with heavy bursts throughout the remainder of the day. The expectation is a quarter of an inch of rain in the afternoon and another half inch between 6 p.m. and midnight.

The forecast is dire enough to cause the R&A to move Sunday’s tee times up roughly 90 minutes earlier than expected. The first time is now set for 7:32 a.m. local time, with the final twosome scheduled for 1:47 p.m. (Compare that to Saturday, when the times were 9:35 a.m. and 3:40 p.m., respectively.)

As always, the language used for the official weather bulletins in the United Kingdom is priceless. Have a look:

A word to all those expected to be at the course on Sunday: Have your waterproofs and brolly ready. It could be a doozy.