Doyle Rice,USA TODAY•July 24, 2019 Another record-smashing heat wave has overspread much of Europe, threatening all-time high temperatures in cities such as Paris, Brussels and Amsterdam.”The most extreme heat will build from central and northern France into Belgium, Netherlands and far western Germany from Wednesday into Thursday,” according to AccuWeather meteorologist Eric Leister.Paris’ all-time record high of 104.7 degrees could be broken Thursday, according to Meteo France, the country’s weather service. That record was set on July 28, 1947, the Weather Channel said.Unprecedented 104-degree highs are also possible in parts of Belgium, the Netherlands and Luxembourg, which would smash all-time records, according to Weather Company meteorologist Hannah Findley.

Children play at the dancing fountains of the Andre Citroen park in Paris on July 23, 2019.The heat will also bake the United Kingdom, where high temperatures will soar into the 90s to near 100 degrees by Thursday. „There is a real possibility of records being broken this week, not only for July but also all-time records,” said the Met Office‘s chief meteorologist, Frank Saunders.

The Weather Channel@weatherchannel Another Europe #heat wave may shatter all-time records in #Paris, as well as Belgium and The Netherlands. https://wxch.nl/2LA9uCu 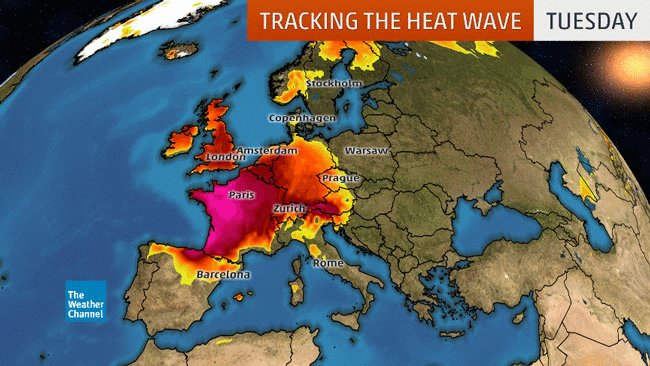 7:25 PM – Jul 22, 2019  In the U.K., the nation’s record high in July is 98 degrees while the all-time record high is 101.3 degrees.”As well as high temperatures during the day, overnight temperatures will also be notably warm and could also break records,” Saunders said.  The heat wave will also extend into other parts of Europe, including Switzerland, Germany, Denmark, Sweden and Norway, among other countries, according to the Capital Weather Gang. This latest heat wave is being triggered by an omega block, a type of upper-level high-pressure pattern resembling the Greek letter Ω that blocks and diverts the jet stream, the Weather Channel said. This will allow hot air to surge northward from northern Africa and the Iberian Peninsula.

AccuWeather@breakingweather Less than one month after a historic heat wave gripped more than half of Europe, another far-reaching heat wave will affect many of the same locations this week: http://ow.ly/9IHk50v8b3S 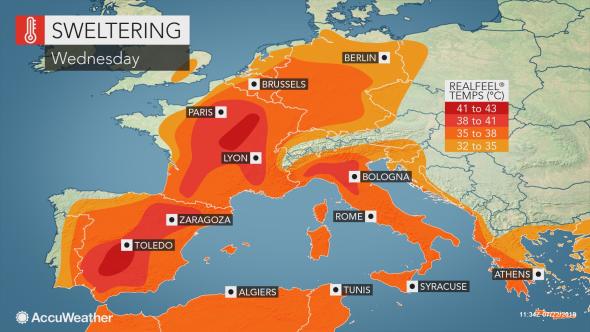 1:00 AM – Jul 23, 2019 This is Europe’s second major heat wave of the summer: Just four weeks ago, eight countries set June national heat records during another long-lived heat wave.Heat waves like the two this summer are extreme weather events, but research shows that with climate change they are likely to become more common, perhaps occurring as regularly as every other year, the U.K. Met Office said. This article originally appeared on USA TODAY: Europe heat wave: Record highs could be set in Paris and Brussels

The French capital Paris could see its all-time record temperature beaten on Thursday
The French capital Paris could see its all-time record temperature beaten on Thursday (AFP Photo/Zakaria ABDELKAFI) Paris (AFP) – Tour de France cyclists competed in scorching temperatures and a French nuclear power plant prepared to shut down Tuesday as western Europe baked in a new heatwave already breaking longstanding records.Overheating tourists in Paris and Berlin plunged into fountains and ornamental ponds to keep cool while zoo keepers in the Netherlands handed out food caked in ice to look after thirsty animals.The southwestern French city of Bordeaux saw its highest ever temperature since records began of 41.2 degrees Celsius (106.16 Fahrenheit), beating the previous high of 40.7C registered in August 2003, weather service Meteo-France said.Forecasters predicted new temperature highs in a string of countries, including Belgium, Luxembourg, Germany and the Netherlands, where the mercury is set to reach 40 degrees Celsius (104 Fahrenheit) for the first time on Thursday.The same day could also mark the all-time record temperature for the French capital Paris, whose current record has stood at 40.4 degrees Celsius (104.7 degrees Fahrenheit) for over seventy years.Meteo-France currently has a record 81 of the country’s 96 mainland departments on an orange weather alert, meaning citizens should be highly vigilant.- Nuclear shutdown -As the Tour de France reached its final week in the southeast of the country, ice foot baths and extra water points were on hand to avoid dehydration.”In the third week of the Tour de France, I think heat like this could make the difference,” said Davide Bramati, head of sport for team Deceuninck, whose cyclist Julian Alaphilippe is currently leading the world-famous race.French energy company EDF said it would temporarily shut down the two reactors at its Golftech nuclear power plant this week in the southern Tarn-et-Garonne department, in a bid to limit the heating of water used to keep reactors cool.Reactor number 2 will shut down on Tuesday evening and number 1 on Wednesday, with both due to stay shut until July 30.France is gearing up for a surge in electricity use this week, but the national electricity board said Monday that there will be enough supplies.The government outlawed animal transportation „for economic reasons” between 1:00 pm and 6:00 pm in areas affected by heat alerts.Unlike the scorching heatwave at the end of June, the current blast of hot air is most severe in parts of northern Europe completely unaccustomed to such temperatures.- ‘Extremely hazardous’ -In Britain — where temperatures could exceed the all-time record of 38.5 degrees Celsius (101 Fahrenheit) on Thursday — asthma sufferers were warned of a „toxic cocktail” of hot, humid weather and rising pollution levels.This „could be extremely hazardous for the 5.4 million people in the UK with asthma, triggering deadly asthma attacks,” said Andy Whittamore, clinical leader at charity Asthma UK.In the Netherlands — where most of the country was hit by a „code orange” alert Tuesday — the government activated its „national heat plan”, issuing advice for hospitals, retirement homes and even obese people.In Bordeaux, a host of charities accused the local prefecture of „putting more than 300 people out on the street” after evicting migrants from squats in May and July.The heatwave has also caused water shortages in dozens of regions across France, with a drought raising concerns for farmers producing crops from potatoes to grapes.In the Vosges mountains of eastern France, farmers have been forced to let their cattle graze pastures on what are ski slopes in winter in order to feed them.- ‘Irreversible breakdown’ -The new heatwave also amplified concerns that human activity is heating the planet at a dangerous rate.The June 26-28 heatwave in France was four degrees Celsius (7.2 Farenheit) hotter than an equally rare June heatwave would have been in 1900, the World Weather Attribution (WWA) team said this month.One study by the Swiss Federal Institute of Technology said the deadly, weeks-long heatwave across northern Europe in 2018 would have been statistically impossible without climate change.Swedish teenage climate activist Greta Thunberg, who has highlighted the problem of global warming through school strikes, told MPs at French parliament of dire consequences if „business as usual” continued until 2030.  „We will likely be in a position where we may pass a number of tipping points and we will be unable to undo the irreversible breakdown,” she said.

People participate in water activities on the Potomac River in July 2012 in Washington (AFP Photo/ALEX WONG)Washington (AFP) – The Potomac River, which flows through the US capital Washington, hit a record high temperature of 94 degrees Fahrenheit (34 degrees Celsius) over the weekend — as warm as bathwater — following a major heat wave.The previous highs came in the summers of 2011 and 2012, though record keeping began only in 2007.On Sunday, the temperature exceeded previous records by half a degree Fahrenheit near the Little Falls rapids, upstream from the US capital, peaking at 93.7 degrees Fahrenheit at four feet (1.2 meters) from the shore, halfway between the surface and the bottom, according to the US Geological Survey.The United States sweltered in dangerously hot weather over the weekend, with major cities including New York, Philadelphia and Washington broiling in temperatures that rose into triple digits. US media blamed the heat wave for at least six deaths, including a hiker who had been found unconscious on a trail outside Washington on Saturday and two people who died earlier in the week in the eastern state of Maryland.

FILE PHOTO: A bison walks in Yellowstone National Park(Reuters) – A nine-year-old girl visiting Yellowstone National Park was struck and thrown into the air by a charging bison, park officials said on Tuesday, but she survived the attack and was released after being treated at the Old Faithful Lodge.The girl, from Odessa, Florida, was in a group of roughly 50 people who were standing near the bison for about 20 minutes in the Old Faithful Geyser area on Monday before it charged, Yellowstone officials said in a written statement.The victim, who was not identified, was treated by emergency personnel at Old Faithful Lodge and released. No citations were issued in the incident, the park said.Millions of visitors travel yearly to Yellowstone, which spans parts of Wyoming, Montana and Idaho, to view wildlife, including its famed bison, also known as buffalo.  Park rules dictate that visitors give animals a wide berth, requiring them to stay at least 25 yards (meters) from bison and elk and 100 yards from predators such as wolves and bears.In June 2018, a Yellowstone bison gored a woman after a crowd surged within feet of it, according to the park.(Reporting by Dan Whitcomb; Editing by Tom Brown)