Vandana Ravikumar,USA TODAY•July 29, 2019 Tropical Storm Erick is expected to strengthen into the eastern Pacific Ocean’s latest hurricane as it approaches Hawaii this week. The weather system organized into a tropical depression more than 1,000 miles southwest of Baja California early Saturday morning before rapidly strengthening into a tropical storm. „Maximum sustained winds are near 40 mph (65 km/h) with higher gusts,” the National Hurricane Center said in a weather advisory. „Strengthening is forecast, and Erick is expected to become a hurricane by late Monday with continued strengthening through Tuesday.”Although it’s too early to tell if Erick will be a direct threat to Hawaii, rough surf and increased rip currents will impact the Big Island, Accuweather said.”Erick would still be almost a week out, so there’s a lot of uncertainty on the exact track,” said Alan Reppert, a senior meteorologist for Accuweather. „Any slight change in that track could really affect any rainfall we see in Hawaii.”

NHC Eastern Pacific@NHC_Pacific Tropical Storm #Erick is forecast to move toward the Hawaiian Islands through the week, crossing into the Central Pacific basin late Monday or early Tuesday. Follow @NWSHonolulu for more info on Erick’s possible impacts on the islands later in the week. https://www.weather.gov/hfo/ 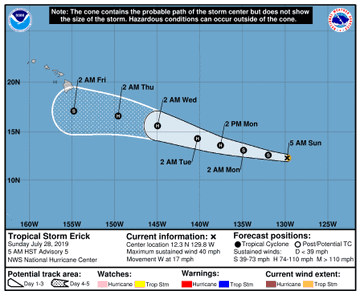 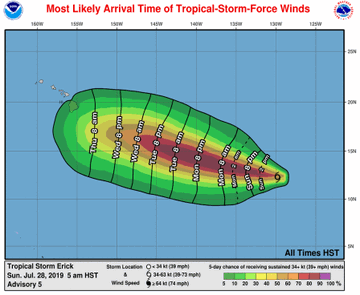 6:14 PM – Jul 28, 2019 The amount of rainfall Erick delivers will depend on where the storm moves in proximity to the islands, though it’s „almost impossible” to say which islands might be affected, according to Reppert. „At least for now, it looks like Erick is still likely to be off to the south of the Big Island,” Reppert said. „For now, we’re looking at that push off to the south. If that is in fact the case, we may seen much less rainfall from this than if it was farther north and moving over the island.” Another tropical depression that has formed behind Erick is also likely to become a hurricane in the next two to three days, according to another advisory issued by the National Hurricane Center.That system, Tropical Storm Seven-E, was off the southern coast of Mexico on Sunday morning and moving at about 21 miles per hour west-northwest. „That’s even farther east than Erick is right now,” Reppert said. „That could be another thing to keep an eye on for Hawaii, and how that moves westward over the next week.”This article originally appeared on USA TODAY: Hawaii ahead, Tropical Storm Erick to become hurricane by Monday night

AFP•July 28, 2019 Record breaking heat wave slams Europe once again Stockholm (AFP) – Nordic countries are experiencing searing temperatures as Europe’s record-breaking heatwave moves north, with Norway on Saturday equalling its 1970 record, and many areas recording „tropical nights”.Laksfors in northern Norway on Saturday recorded a temperature of 35.6 degrees Celsius (96 degrees Fahrenheit), equalling the national record set in Nesbyen in 1970, the country’s meteorology service said on Twitter, adding however that the Meteorological Institute needed to „double check” that the measuring station was operating properly.The Norwegian Meteorological Institute also said it had recorded „tropical nights” in 20 different locations in southern Norway, meaning that temperatures stayed above 20 degrees throughout the night.The tropical heat was also felt around other parts of the Nordics and in neighbouring Sweden, with most extreme heat in the country’s far north.On Friday the small town of Markusvinsa in the far north recorded a temperature of 34.8 degrees Celsius.”That’s the hottest temperature in the far north since 1945 and the third highest temperature on record,” Jon Jorpeland, meteorologist at the Swedish Meteorological and Hydrological Institute (SMHI), told AFP.Earlier in the week several places in Sweden also experienced „tropical nights”.According to Jorpeland, temperatures in the south of Sweden haven’t been as extreme and it’s not unusual that the mercury reaches 30 degrees a few days a year in the country, even though current temperatures are above average.SMHI has also issued warnings of potential water shortages in August in 15 of the country’s 21 counties.Heat warnings have been issued in Sweden, Norway and Finland and earlier this week Finnish police even warned motorists to be mindful of moose, who were increasingly crossing roads in search of water to quench their thirst.The World Meteorological Organization on Thursday said forecasts indicated that atmospheric flows would transport the heat from Europe to Greenland „resulting in high temperatures and consequently enhanced melting”.  Current predictions indicate the resulting melting of ice could approach the record losses recorded in 2012, the organisation said, citing scientists from the Danish Meteorological Institute.

A man and woman arrested over a mass brawl which broke out on a British cruise ship have been released.

Six people were hurt as P&O’s Britannia sailed to Southampton after a week-long trip to Norway’s fjords.

A 43-year-old man and a woman, 41, both from Chigwell, Essex, were arrested on suspicion of assault.

Plates and furniture were reportedly used as weapons during the incident in the early hours of Friday.

Good Morning Britain journalist Richard Gaisford, who was on board, said the violence occurred after a black-tie evening and an afternoon of „patriotic” partying on deck, when large amounts of alcohol were consumed.

He said on Twitter: „Witnesses told me they were so frightened they had to hide, as family groups fought.”

Mr Gaisford said he had been told by a witness the incident was sparked by a passenger taking offence at another holidaymaker dressed as a clown.

However, P&O denied there was someone dressed as a clown on the ship.

Hampshire Police said its officers attended the ship when it docked in Southampton.

A police spokeswoman said three men and three women were assaulted, with their injuries including significant bruising and cuts.

The couple remain under investigation.