Reuters•July 30, 2019 (Reuters) – Tropical Storm Erick in the eastern Pacific is likely to grow into a hurricane soon, possibly reaching Category 3 strength by Tuesday as it churns closer towards Hawaii, but it is expected to begin weakening later in the week, forecasters said on Monday.The latest advisory from the U.S. National Hurricane Center put Erick’s centre at about 1,200 miles (1,945 km) east-southeast of Hawaii’s Big Island, the easternmost edge of the U.S. archipelago state, still too far away to pose any threat to land.Packing maximum sustained winds near 70 miles per hour (110 kph), Erick was poised to reach hurricane strength imminently, and could grow by Tuesday into a major hurricane, defined as a Category 3 on the five-step Saffir-Simpson wind scale, according to the latest forecast.Erick would be the third hurricane in the eastern Pacific this season.”A weakening trend is expected to begin later in the week,” the hurricane centre advisory said.A tropical storm becomes classified as a Category 1 hurricane when its top sustained winds reach 74 mph (119 kph). Sustained wind speeds of at least 111 mph (178 kph) make it a Category 3.The weather system is expected to weaken back into a tropical storm by the time it makes its closest approach to Hawaii, with Erick forecast to skirt south of the Big Island on Friday morning. Forecasts call for a higher chance of gale-force winds from the storm on the Big Island later this week.Another tropical storm, dubbed Flossie, was trailing Erick farther out in the eastern Pacific.(Reporting by Steve Gorman in Los Angeles; Editing by Sandra Maler)

Strengthening Tropical Storm Erick forecast to approach Hawaii by week’s endTropical Storm Erick is gaining strength in the eastern Pacific Ocean and is forecast to approach Hawaii by the weekend, forecasters announced Monday.The latest forecast from the National Hurricane Center said Erick should reach hurricane strength later Monday.The center said Erick could grow into a major hurricane Tuesday but should begin losing strength Wednesday and gradually weaken back into a tropical storm before nearing Hawaii.

„Even if the center of the storm passes south of the state some impacts from the storm may extend well north of the low center,” the National Weather Service in Honolulu said.”For now, we are forecasting an increase to moisture levels, clouds and showers; starting over the Big Island by late Thursday and spreading westward to the smaller islands into the weekend,” the weather service said.As of 5 p.m. ET Monday, Erick was located about 1,205 miles east-southeast of Hilo, Hawaii. It had maximum sustained winds of 70 mph and was moving west-northwest at 16 mph.A tropical storm becomes a hurricane when its winds reach 74 mph.Erick would become the third hurricane of the 2019 East Pacific hurricane season, following Alvin and Barbara, AccuWeather said.Another system, Tropical Storm Flossie, was also spinning in the eastern Pacific Ocean. It was centered about 830 miles south-southwest of the southern tip of the Baja California Peninsula and was moving west at 18 mph. The storm had maximum sustained winds of 50 mph, though it too was projected to grow into a hurricane on Tuesday or Tuesday night.Flossie could take a similar or perhaps even more northerly track than Erick, AccuWeather said. This could put Hawaii in the forecast path of Flossie by early next week.Closer to the U.S. mainland, forecasters were watching a system in the Caribbean Sea that has a 10% chance of becoming a tropical depression or storm within the next five days.This system is expected to move west-northwestward across the Caribbean and the Greater Antilles during the next few days, bringing locally heavy rainfall and possibly some flooding across portions of these islands, the hurricane center said.On Puerto Rico, the rain would be welcome as it could help alleviate drought conditions there.By week’s end, the system should be near Florida or the Bahamas.Contributing: The Associated PressThis article originally appeared on USA TODAY: Tropical Storm Erick could graze Hawaii by week’s end

Visitors on Brighton beach play in the sea during hot summer weather in BrightonLONDON (Reuters) – Britain recorded its highest-ever temperature of 38.7 Celsius (101.7 Fahrenheit) in Cambridge on July 25, the country’s national weather service said on Monday, confirming an earlier provisional reading.The temperature was recorded at Cambridge University Botanic Garden, beating a previous record high of 38.5 Celsius from August 2003.The Met Office, a government weather forecasting agency, provisionally announced the result on Friday and said on Monday that it had now been officially validated.The Met Office said there was still a chance that an even higher value had been recorded elsewhere, as some of its observation sites only report monthly.  (Reporting by Kylie MacLellan, editing by David Milliken)
News The grasshopper swarm in Las Vegas was so big it looked like a storm on weather radar

The grasshopper swarm in Las Vegas was so big it looked like a storm on weather radarLAS VEGAS – On Friday night, meteorologists in Southern Nevada looked at the pulsing green images on the weather radar and discovered there was much more than the raindrops of scattered thunderstorms swirling on the screen.”Insect swarms,” said National Weather Service Meteorologist Kate Guillet.Most of the flurry found on the screen, she said, was a sprawling swarm of pallid-winged grasshoppers now plaguing the neon lights, streets and sidewalks of Las Vegas.The service posted a photo of the radar images to Twitter Friday night, showing what looked like a large storm moving east-to-west across the Las Vegas Valley. 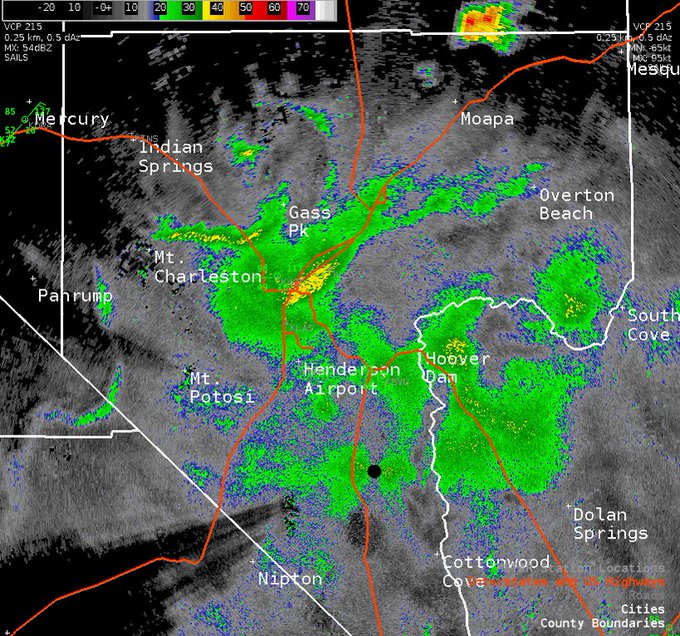 488 people are talking about this

While some of the activity in the northern sector of the radar display included rain, a majority of the green coloring in the southern half of the Las Vegas represented an insect invasion so large it registered on weather radar.

The most common „biological targets” captured on weather radar in Southern Nevada are birds and bats.

The jumpy bugs are likely to remain in transit across Southern Nevada over the next several weeks, Knight said.

In 2010, state agriculture officials gear up for a springtime invasion of crop-eating grasshoppers in northern Nevada.