Trump said his Florida resort where he wants to host the next G7 has ‘no bed bugs.’ The resort settled a lawsuit over bed bugs there in 2017

President Donald Trump tweeted that there are „No bedbugs at Doral” — referring to his Florida resort which reached a 2017 settlement with a guest who alleged he was bitten by bed bugs there in 2016.”No bedbugs at Doral,” Trump tweeted. „The Radical Left Democrats, upon hearing that the perfectly located (for the next G-7) Doral National MIAMI was under consideration for the next G-7, spread that false and nasty rumor. Not nice!”In 2017, the resort reached a 2017 settlement with Eric Linder, an insurance executive, who charged he was bitten repeatedly by bed bugs while staying in the resort’s posh Jack Nicklaus Villa in 2016.The Trump Organization denied Linder’s claim that his room had a „severe bed bug infestation.”Read more: New York Times columnist Bret Stephens deactivates his Twitter after attacking a professor for calling him a ‘bed bug’Over the past 24 hours, Trump has repeatedly suggested that Trump National Doral Miami Golf Resort is well-positioned to host the 2020 Group of Seven summit meetings next year. However, the arrangement could be a violation of the Constitution’s emoluments clause, which prohibits US officials from receiving gifts or money from foreign governments without congressional approval.”Doral happens to be … only five minutes from the airport,” he told reporters. „And by the way, my people looked at 12 sites, all good, but some were two hours from the airport, some four hours.”He went on, „We have a series of magnificent buildings, we call them bungalows, they each hold from 50 to 70 rooms, they have magnificent views.”The White House has not yet announced the location of next year’s G7, which the US will host.NOW WATCH: A year after Armenia’s 250,000-person revolution, Prime Minister Nikol Pashinyan explains what comes next for the country

Christopher Wilson Senior Writer,Yahoo News•August 26, 2019 President Trump blames Obama for Russia illegally annexing Crimea President Trump blamed the last U.S. president for Russia’s illegal annexation of Crimea in 2014, praising President Vladimir Putin for outsmarting President Obama and saying he thought Russia should be welcomed back into the annual meeting of the leaders of the world’s largest economic powers.Speaking in France at the G-7 conference, Trump repeatedly expressed his disagreement with the decision to suspend Russia’s membership in what was then called the G-8 over its seizure of the crucial peninsula of Crimea from the Ukraine. He claimed that Obama was “embarrassed” and “outsmarted by Putin.”“Would I invite [Putin]? I would certainly invite him,” Trump said, in answer to a question about next year’s meeting, which will be hosted by the U.S. But he expressed concern that the Russian president’s feelings were hurt by the earlier expulsion. “Whether or not he could come psychologically, I think that’s a tough thing for him to do.”The Guardian reported Sunday that Trump’s suggestion that Russia be readmitted to the G-7 was not supported by the other world leaders in attendance.“It was sort of taken away from President Obama, not taken away from President Trump,” the president explained. “President Obama was not happy that this happened and it was embarrassing to him, right? It was very embarrassing to him, and he wanted Russia to be out of what was called the G-8. That was his determination. He was outsmarted by Putin. President Putin outsmarted President Obama. I can understand how President Obama would feel, he wasn’t happy.”Trump had previously sided with Putin against U.S. intelligence agencies at a 2018 meeting in Helsinki. He didn’t answer a question Monday about possible Russian meddling in the next presidential election.A reporter pressed Trump on his assertion that Obama was behind Russia’s departure from the G-8. Its annexation of Crimea in violation of international law resulted in sanctions by both the United States and the European Union, and a condemnation from NATO, which said in a statement, “We strongly condemn this act, which we do not and will not recognize.” On the fifth anniversary of Russia’s takeover in March, EU foreign policy head Federica Mogherini said, “We stand in full solidarity with Ukraine, supporting its sovereignty and territorial integrity.”“It was annexed during President Obama’s term. If it was annexed during my term, I would say, ‘Sorry, folks, I made a mistake’ or ‘Sorry, folks,’” said Trump, adding, “President Obama was pure and simply outsmarted. They took Crimea during his term. That was not a good thing. It could have been stopped. It could have been stopped with the right… whatever. It could have been stopped, but President Obama was unable to stop it and it’s too bad.”Trump did not complete his thought about how Russia could have been stopped from the land grab.Crimea is a roughly 10,000-square-mile peninsula across the Black Sea from Russia that was transferred to the Ukraine in 1954. When the Soviet Union collapsed in 1991, the land was part of an independent Ukraine. Russian troops entered the area in February 2014, and the other G-8 members agreed a month later to suspend Russia’s membership while canceling a planned summit in Sochi, Russia.As a candidate in 2016, Trump said he was open to recognizing Russia’s claims to Crimea. “I’m going to take a look at it,” Trump said. “But you know, the people of Crimea, from what I’ve heard, would rather be with Russia than where they were. And you have to look at that also.”The president said he didn’t care if inviting Russia to an international summit on U.S. soil would hurt him politically.“I ran one election and I won, happened to be for president,” said Trump. “I don’t care politically. I’m going to run another election, I think I’m winning based on polls that we see. Whether I win or not, I have to do the right thing. I don’t do things for political reasons. Is it good? Probably not. Maybe it is, a lot of people are smart.”Trump also criticized Obama for not striking Syria when the country crossed his established “red line” and used chemical weapons.

Scroll back up to restore default view.Donald Trump unleashed a series of controversial late-night tweets from the G7 Summit in France over the weekend, reigniting his feud with Ilhan Omar and attacking Canadian Prime Minister Justin Trudeau.The president promoted an unfounded and incendiary claim purported by the far right online that Ms Omar, a Democratic congresswoman of colour and former refugee from Somalia, married her brother years before she took office in 2018.

Donald Trump claims trade war discussions will soon resume, but China denies knowledge of recent communication: Chip Somodevilla/Getty ImagesMr Trump retweeted a video shared by the conservative group Judicial Watch claiming there was “credible evidence” the 37-year-old politician married her sibling, while calling on “federal officials and law enforcement to investigate her”.“It’s so bad in terms of the documentary evidence, we can’t even be confident her last name is Omar,” Tom Fitton, president of Judicial Watch, told Breitbart in the video shared to Twitter on Sunday.“It’s that crazy,” he added, before attributing evidence about the details of Ms Omar’s wedding to the conservative Powerline blog. “There’s all this evidence that has been out there, basically her hometown newspaper has confirmed the reporting of the Powerline blog.”Mr Fitton concluded it was “well past time for federal officials and law enforcement to investigate” Ms Omar and for the US House of Representatives to “get on the ball as well with an ethics investigation”.The claims Mr Trump helped spread have in fact not been confirmed and were described as “disgusting lies” by Ms Omar.The Minneapolis Star-Tribune did not confirm the Powerline blog’s reporting, as Mr Fitton claimed, but instead said it was not able to reach a complete conclusion during its investigation into Ms Omar’s wedding.

Trudeau bravely trash-talks Trump to the press gallery in Canada. But whenever they actually meet, Trudeau assumes a submissive position — politically, and even physically. Just look at this picture. Even a child would know who is in control. 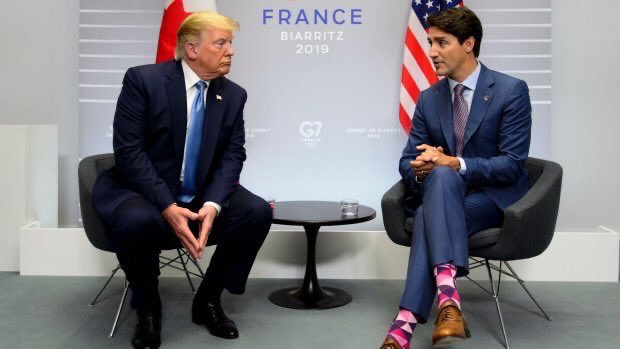 18.9K people are talking about this

“It seemed clear that there is some kind of personal relationship between” Ms Omar and her ex-husband Ahmed Nur Said Elmi, the newspaper’s political editor Kevin Diaz told Politifact. “But whether they are family or not, we can’t tell. We weren’t able to come close to determining whether that was the truth. And frankly, we were wary of drawing any conclusions.”

Ms Omar has shot down the rumours, which seemingly stemmed from old social media posts that have since been shared by right-wing circles on the internet. The newspaper said its evidence largely came from those social media posts.

“It’s really strange, right, to prove a negative,” Ms Omar told the Associated Pressin 2018. “If someone was asking me, do I have a brother by that name, I don’t.”

The president also retweeted an image of him and Mr Trudeau shared by Canadian media personality Ezra Levant that said the Canadian prime minister “assumes a submissive position — politically, and even physically” when meeting with Mr Trump.

“No, we actually had a very good and productive meeting,” Mr Trump wrote along with the picture, adding: “Nice!”

The posts arrived as Mr Trump was meeting with economic world powers at the G7 summit in Biarritz, France over the weekend. On Monday, the president missed a climate meeting with the economic world powers, delayed a meeting with German Chancellor Angela Merkel by two hours, according to the Associated Press, and told reporters he was considering holding next year’s summit at his private golf resort in Miami, Florida.