‘We take care of our own’: Houstonians pull together to weather through Imelda

Adriana Navarro,AccuWeather•September 21, 2019 Harvey heroes Gallery Furniture owner Jim „Mattress Mack” McIngvale, rapper Trae Tha Truth and DJ Mr. Rogers have stepped up once again to help flood victims, this time from Imelda.McIngvale had opened his furniture gallery to flood victims during Hurricane Harvey in 2017, and Trae Tha Truth had formed the Relief Gang with DJ Mr. Rogers. The two musicians had driven around in a lifted truck, transporting people who otherwise couldn’t get through the floodwaters. On Thursday, they found themselves back in the rhythm of performing rescues.”I thought I’d never have to do this again in my lifetime, but here we are again and the city of Houston is responding like we always do. We take care of our own,” McIngvale told KTRK ABC 13.”It was reminiscent of Harvey, for sure,” Mr. Rogers said.

As Imelda sparked fears of a second Harvey, the citizens of Houston stepped up and the stories began to circulate from a high school football player helping save a mother and her daughter from their car to two women pushing a car out of a flooded road.The flooding had started on Tuesday night, but it had escalated into a full deluge by Thursday afternoon.By Friday afternoon, the Harris County Sheriff’s Office’s dispatchers had fielded 1,125 total weather-related calls, 425 of which were high-water rescues.”It was kinda unexpected of how serious it was going to be,” Trae Tha Truth said.Floodwaters had isolated neighborhoods had flooded, water had invaded homes and a large number of roads were nearly impassible. The fatality count grew to four by Friday afternoon.

One couple’s midstorm grocery run turned into a fight for their lives when their car hit floodwaters. Robert Horne said his car had been floating, and the water seeping in had come up to his waist. Porter County firefighters rescued the couple seven hours after they had set out for groceries.While the Harris County Sheriff’s Office had responded to over 350 stranded vehicles, three women in Houston were warning another 100 drivers to turn around and not go through an inundated road.Erika Maida took a video of Zoya Banks and Mia Maurice as the two waded into the water to push the car to dry ground in Houston, Texas. The floodwaters were rising, and Maida told Storyful nearly two to three feet of water had inundated the road.”That’s when we really noticed how deep it was and started yelling at people not to go [through the water],” Maida told Storyful.

A record amount of rain had fallen in Houston, the total inches of rainfall on Thursday reaching 9.21 inches.In Aldine, Texas, Aldine High School football player Jayden Payne jumped into floodwaters to save a mother and her toddler when their car drove into a ditch.”I hurried up, threw my jacket off, I threw my shirt off,” Payne told the Houston Chronicle. „I ran over there across in front of all the cars. I didn’t care if all the cars stopped or not because I was more worried about their safety than my safety.”With the help of two other men, Payne pulled the woman and her daughter out of the BMW SUV, fighting against a strong current.”She was crying. She said ‘You’re my guardian angel,'” Payne told the news organization about the mother.

@GungHoMustangs@gunghomustangsMustang football player Jayden Payne jumped into the water to help save a woman and her toddler when the car they were in went into the ditch running beside Aldine HS. Great job Jayden…and the 2 other men who risked their lives to help another! @AldineHS_AISD @AldineISD 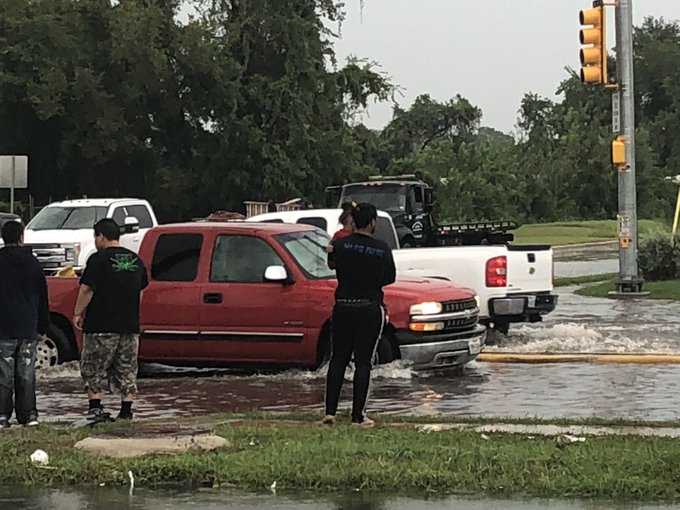 140 people are talking about this
Volunteers rescued a horse trapped in mud in Splendora, Texas, on Thursday night. They spent about four hours digging the horse out, and the rescue was declared a success.”We all work together. That’s what Texans do. We pull together, and we get it done, and we came through Harvey, we’ll certainly get through this,” McIngvale said.
For Some in Texas, Imelda’s Heavy Rain Feels Like Harvey 2.0

Cars move through flooded streets as Tropical Depression Imelda brings rain to Houston, on Sept. 19, 2019. (Ilana Panich-Linsman/The New York Times)ANAHUAC, Texas — Sitting in a chair next to a green cot inside a disaster shelter, his small dog on his lap, Edmund Hann was in a daze. Two years ago, Hurricane Harvey flooded his home in Winnie, Texas. On Thursday, Tropical Depression Imelda did the same.“I never thought I’d go through it a second time,” said Hann, 81, who moved back into his rebuilt home 15 months ago. “It was 31 inches of water in Harvey. And this one right here has got to be at least 40 inches.”Across southeast Texas, residents called the deluge Harvey 2.0.From Houston to Galveston, Tropical Depression Imelda soaked this patch of the state for much of the week. It intensified Thursday near Beaumont, Texas, and surrounding rural towns, with severe flooding that shut down highways, left hundreds of residents stranded and reflected some of the highest rainfall totals in the region since Hurricane Harvey in August 2017.The city of Beaumont was pummeled with nearly 25 inches of rain. In southwestern parts of the city and into Jefferson County, almost 42 inches were recorded this week, with much of it coming in the last 24 hours, the National Weather Service said Thursday. Chambers County — which includes Hann’s town, Winnie — received 36 inches of rain this week, local officials said.

More than 1,000 people were rescued in Harris County, the county judge, Lina Hidalgo, said at a news conference Thursday afternoon.

In nearby Orange County, officials said at least 400 high-water rescues were made, most in the hard-hit Vidor area across the Neches River from Beaumont.

Nearly 140 people from Winnie and other Chambers County towns were staying at the American Red Cross shelter in Anahuac, Texas, after authorities and volunteers rescued them by boat, high-water rescue vehicles and, at times, a dump truck.

Vehicles were abandoned in the ditches of country roads nearby. A hospital evacuated some patients but remained open, with employees trudging barefoot across the sopping floor to treat the patients who remained. Residents said they had seen cattle in flooded fields, their noses poking out from under the water.

At least 800 houses and businesses were flooded in Chambers County, and officials rescued at least 300 people Thursday, as well as a few dozen dogs, cats and horses. The officials said rescues were complicated by the swift-moving floodwaters that shut down parts of Interstate 10 and turned rural ranches and country roads into lakes.

“A lot of people are getting flooded in their cars,” said Ryan Holzaepfel, the fire marshal in Chambers County. “They think they can drive through the water, but it’s deeper than they think.”

In Beaumont, drivers were inundated as the water around them reached as high as their door handles. Exxon Mobil shut down its chemical plant in the city and was closely monitoring its refinery on the same site. The Beaumont Police Department said it had been overwhelmed with calls, fielding nearly 600 requests for assistance by Thursday morning.

In some ways, there was no comparison between Harvey and Imelda. Imelda came nowhere close to the widespread scale and devastation wrought by Harvey, ranked as one of the costliest hurricanes in the U.S., second only to Hurricane Katrina, and the cause of dozens of deaths. It also battered a wider region, lingering for days as a tropical storm and dropping more than 50 inches of rain in some areas, while Imelda’s heaviest rains have come in more isolated pockets.

But for those in Beaumont, Winnie and other nearby towns, Imelda felt like a sequel.

In certain areas of southeast Texas, it was “higher water than Harvey,” said Holzaepfel, the fire marshal. “It’s flooding homes that did not flood through Harvey.”

On Thursday, there were limited reports of deaths and injuries. A young man drowned after being electrocuted while trying to move his horse, his family said. The Harris County Sheriff’s Office said on Twitter that another man had been extracted from a submerged van and was pronounced dead.

During Harvey, deadly flooding in Beaumont shut off running water and nearly turned the city of 120,000 into an island. Carla Cruz, 23, remembers it all too well. She remembers how water flowed through her home on Calder Avenue, how it took more than a year to replace the furniture, and how she couldn’t drink the tap water or shower in the house for two weeks after the storm.

On Thursday, her dog began howling around 4 a.m. Cruz woke up and swung her feet out of bed to see what was wrong. When her feet hit the floor, she felt the cold water and heard a splash. Her heart sank.

“It was too late for us to try to save furniture and clothes,” she said. As Cruz and her family grabbed a few belongings, the water rose to their knees. When they stepped outside, it was to her waist.

“Outside my house, it was basically like a lake,” said the Beaumont native. Her car was filled with water.

Cruz, a server at an Italian restaurant, said city residents live with “a little PTSD.” They exchange nervous glances whenever it rains for more than an hour.

On Thursday, that sense of panic resurfaced for many.

“I know it’s weather and we can’t control it,” she said, “but we went through this already.”

As in Harvey, people in the area were stranded, unable to check on the condition of their homes because the roads were impassable. Many, like Jody Chesson, stayed with friends, in shelters or at hotels.

Chesson, 53, an operator at the Goodyear chemical plant in Beaumont, said he was driving slowly early Thursday morning, headed into work, when he drove his Jeep Wrangler into deep water.

“I put my brakes on, but it was at the hood,” Chesson said. “By the time I stopped, it was over the hood.”

He tried backing up, but the Jeep was dead.

“Water was just gushing in,” he said.

He could not open the driver’s side door. He opened the passenger door, climbed on top of the Jeep and called 911. He was told no one could help him at the time, and so he swam and walked to a nearby hotel. Then the hotel started to flood, and Chesson and others went to the upper floors. Hours after he abandoned his Jeep at Interstate 10 and Highway 69, he was still stranded at the hotel.

At the Red Cross shelter in Anahuac on Thursday afternoon, children watched cartoons on a screen and raced toy cars in a corner. A woman lay curled up on a cot, a Red Cross blanket wrapped tightly around her. The parking lot was packed with firetrucks, air boats attached to trailers and camouflage emergency vehicles.

The shelter was about 20 miles away from Winnie, in one of the few places that remained accessible to vehicles.

Ellen Barber, 67, lay on her back on a cot in the middle of the room, her cane by her side. She was trying to sleep but was still too shaken up to rest. The waters started coming into her ground-floor apartment in Winnie at about midnight, she said. She grabbed her medicines and her grandfather’s Bible, called 911 and was evacuated. On the drive from Winnie to Anahuac, she said, she could not tell where the fields and the land began and the rivers and bayous ended.

“This was unexpected — Harvey was expected,” Barber said. “To me, this is worse.”

This article originally appeared in The New York Times.