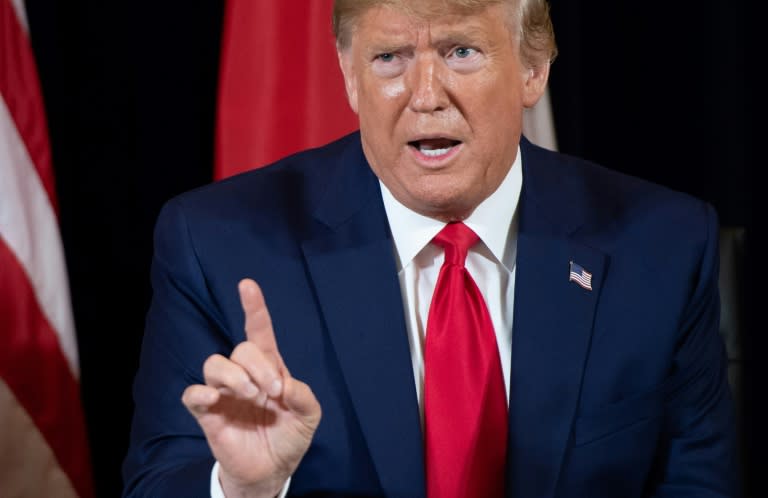 ‘I deserve to meet my accuser,’ Trump said (AFP Photo/SAUL LOEB)Washington (AFP) -President Donald Trump said Sunday he wants to meet the anonymous whistleblower at the center of the scandal threatening his presidency.Trump has been relatively quiet this weekend but in a series of evening tweets he also blasted Democratic lawmakers and the media as he railed against the impeachment inquiry launched last week.That probe was triggered by the release of a rough transcript of a July phone call in which Trump asked the president of Ukraine to investigate Joe Biden, a potential Democratic candidate in the 2020 US election.He also enlisted his attorney general and personal lawyer to help in that effort.The whistleblower filed a complaint over the contents of the conversation back in August, saying Trump had tried to get a foreign power to interfere in a US election for his own gain.”Like every American, I deserve to meet my accuser, especially when this accuser, the so-called ‘Whistleblower,’ represented a perfect conversation with a foreign leader in a totally inaccurate and fraudulent way,” Trump tweeted.He also said the de facto leader of the congressional inquiry, Adam Schiff, lied to Congress last week about what Trump said to the president of Ukraine and should be punished.”His lies were made in perhaps the most blatant and sinister manner ever seen in the great Chamber,” Trump tweeted.”He wrote down and read terrible things, then said it was from the mouth of the President of the United States. I want Schiff questioned at the highest level for Fraud & Treason,” he wrote.

Donald Trump May Have Intervened With Colin Kaepernick’s Signing And Fans Are FuriousTheBlast•September 30, 2019

As Donald Trump Faces Impeachment, He Insists Ukraine Convo ‘Made Up’

Kaepernick Is Still Being Shut Out

The controversy around former 49ers quarterback Colin Kaepernick began on September 1, 2016, when he knelt during the National Anthem to protest police brutality. Since then, he’s lost his position and been a lightning rod at the center of a contentious political conversation.

It came out on Sunday morning that President Trump may have used his financial sway with many team owners in the NFL to prevent Kaepernick from getting a spot on the team.

ESPN analyst Stephen A. Smith explained on Hot 97’s Ebro in the Morning that team owners could potentially lose billions of dollars in revenue if they went against Trump, who has been vocal in his hatred of Kaepernick. The NFL is currently trying to get gambling legalized, and that requires the thumbs up from the President and Congress.

„Well, what was going on on Capitol Hill is that the owners, the NFL owners were trying to get involved with that, where they were trying to get a percentage of the bets and all of this other stuff that was going on. So what happens is, we’re talking billions. Well, guess what? In order for that to happen, you need Congress to sign off on it and you need the President to sign off on it. What you don’t need is the President turning his attention towards you and going against you just because he doesn’t like you.”

Fans were outraged by this news, arguing that Kaepernick has been punished for too long. Many pointed out that Antonio Brown, who has been accused of rape and sexual assault, has been given multiple changes despite the horrific allegations.

Even former Fox News pundit Gretchen Carlson thinks that the Kaepernick business is over the top.

Plenty Of Naysayers As Well

Still, as is the case with anything political, there are plenty of people tweeting their continued boycotting of Kaepernick. He’ll likely be an incendiary figure no matter how this deal shakes out

Giuliani said on CBS’s „Face the Nation” that he had recently confirmed that Pompeo knew he pushed for Biden, who is a Democratic hopeful in the 2020 Election, to be investigated, adding to allegations that Trump pressured foreign officials to investigate his political opponent for his own political gain.

„Did Secretary of State Pompeo know you were doing these things? Did he ask you to do these things?” host Margaret Brennan asked.

„He did not,” said Giuliani, the former mayor of New York City. „But when I talked to the secretary last week, he said that he was aware of it.”

Tweet Embed:
//twitter.com/mims/statuses/1178328934871642112?ref_src=twsrc%5Etfw
.@RudyGiuliani tells @margbrennan that Secretary Pompeo did not instruct him to reach out to Ukranians, but was „aware” pic.twitter.com/wtS0tLJ3mO

Giuliani has been at the center of controversy since a bombshell whistleblower complaint was revealed that centered on a July 25 phone call between Trump and Ukrainian President Volodymyr Zelensky in which Trump repeatedly raised to Zelensky a potential investigation into former Vice President Joe Biden, a political rival for the 2020 presidential election.

After a week of major developments in the fallout of the scandal, House Democrats are zeroing in on Trump’s inner circle as they pursue the impeachment inquiry over allegations that Trump pressured foreign officials to investigate his potential 2020 Democratic opponent for his own political gain.

Pompeo is currently facing subpoenas from chairmen of three House committees over his failure to produce documents related to Ukraine as five other State Department officials were scheduled for deposition.

Giuliani and other members of Trump’s inner circle came into the spotlight after a memo released by the White House quotes Trump urging Zelensky to launch an investigation and instructing him to speak with US Attorney General William Barr and Giuliani.

Read more: Here’s the truth about the allegations involving Joe Biden’s son and Ukraine drummed up by Trump and Rudy Giuliani

The claims go back to a bombshell New York Times story published May 1 that revealed the former vice president had successfully gotten a Ukrainian prosecutor removed from office, which prompted concerns of a possible conflict of interest.

Despite the repeated confirmation that there has been no proven wrongdoing by the former vice president, Trump and Giuliani have drummed up allegations against the Bidens to obscure Giuliani’s communications with Ukraine and growing concerns that Trump may have collaborated with a foreign power to gain political leverage.

After the report, Giuliani announced he was planning to travel to Ukraine to press president-elect Volodymyr Zelensky to pursue two investigations that could act as political leverage for Trump.

Giuliani eventually canceled his trip after facing widespread criticism for what appeared to be an attempt to push a foreign government to meddle in the 2020 US election, but Trump and his allies have continued claiming Biden was acting in his own personal interest.

NOW WATCH: Detroit’s gentrification is its compromise for economic recovery

Giuliani says he will cooperate with Trump impeachment inquiry — only if the president gives him the green light Kadia Tubman Reporter,Yahoo News•September 29, 2019

Rudy Giuliani, President Trump’s personal attorney, defended himself Sunday on „This Week With George Stephanopoulos” from accusations lodged by a former White House official that he has trafficked unfounded theories about foreign interference in the 2016 presidential election. (Photo by Jeff Neira/Walt Disney Television via Getty Images)President Trump’s personal attorney, Rudy Giuliani, said Sunday he would cooperate the House impeachment inquiry, but only if directed by his client.Trump, according to a memo of his July 25 phone conversation with Ukrainian President Volodymyr Zelensky and an anonymous whistleblower complaint, repeatedly pressed Ukrainian officials to investigate former Vice President Joe Biden and his son Hunter, and noted that Giuliani would be in contact with Ukraine on the probe.”Rudy very much knows what’s happening and he is a very capable guy,” Trump told Zelensky. „I will have Mr. Giuliani give you a call and I am also going to have Attorney General [William] Barr call and we will get to the bottom of it.”The investigation was based on a dubious claim that, as vice president in 2016, Biden pushed Ukraine’s government to oust a prosecutor, Viktor Shokin, who was investigating Burisma, a Ukrainian gas company that had Hunter Biden on its board starting in 2014, where he received a monthly salary of $50,000.While Joe Biden did call for the prosecutor’s removal, he was one of many international leaders who did so in response to concerns about corruption, a fact that undercuts Giuliani’s claim that Biden acted in his son’s interests. The investigation into Burisma had been closed prior to the vice president calling for the prosecutor’s ouster, Bloomberg News reported. In fact, in late 2014, the Obama administration pressed the Ukrainians to assist the U.K. in a separate investigation into Burisma’s owner.Yet, despite the lack of evidence, Giuliani began pressing the Ukrainians to investigate the Bidens’ role in the prosecutor’s firing earlier this year and has maintained his argument that there was wrongdoing on behalf of the Bidens.Giuliani was named “a central figure” in Trump’s effort to use “the power of his office to solicit interference from a foreign country in the 2020 U.S. election,” according to the released whistleblower complaint against the president for his dealings with Ukraine and allegedly withholding almost $400 million in military aid from the country as leverage for a probe into the Bidens. Giuliani could be one of the potential witnesses Democrats in the six House committees involved in the investigation may seek to interview, as they are said to be eyeing a fast-paced impeachment inquiry, which officially began last week.As Senate Democrats came out in support of the inquiry, Illinois Sen. Dick Durbin said Tuesday there’s an expectation that the “Trump White House will stonewall” congressional investigators. 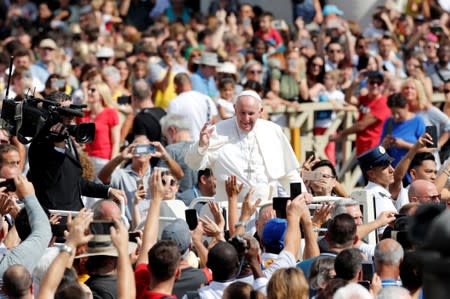 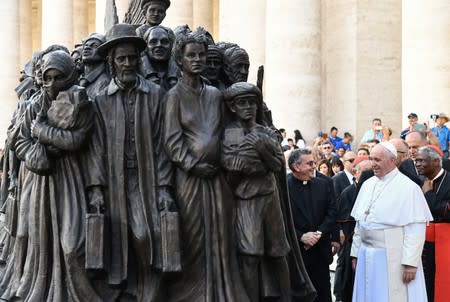 Countries that make weapons of war foment migration but refuse refugees, Pope Francis says Pope Francis attends the unveiling of a sculpture depicting a group of migrants of various cultures and from different historic times, following a mass for World Day of Migrants and Refugees, at St. Peter’s Square at the Vatican By Philip Pullella VATICAN CITY (Reuters) – Pope Francis on Sunday scolded countries that produce weapons for wars fought elsewhere and then refuse to take in refugees fleeing the very same conflicts.The 82-year-old Argentine pope, whose parents were of Italian immigrant stock, has made the defense of migrants and refugees a plank of his pontificate and he has often clashed over immigration policy with U.S. President Donald Trump and populist anti-immigrant politicians in Europe.Francis has also criticized the arms trade repeatedly and his sermon for 40,000 people in St. Peter’s Square on Sunday linked the issues of war and migration as the Roman Catholic Church marked its World Day of Migrants and Refugees.”Wars only affect some regions of the world, yet weapons of war are produced and sold in other regions which are then unwilling to take in the refugees generated by these conflicts,” Francis said.Sunday’s Mass was attended by many immigrants and groups helping them. It was also marked by a mix of African, Spanish and Portuguese music as well as traditional Church music.Francis said the world is becoming increasingly „elitist and cruel toward the excluded”, adding that it is the duty of Christians to look after all those left behind in a „throwaway culture” taking root in society.”This means being a neighbor to all those who are mistreated and abandoned on the streets of our world, soothing their wounds and bringing them to the nearest shelter, where their needs can be met,” he said.People could not remain indifferent to „the bleak isolation, contempt and discrimination experienced by those who do not belong to ‘our’ group”, the pope said.Francis then inaugurated a large statue in St. Peter’s Square, showing dozens of migrants and refugees from different faiths and different periods of history.(Reporting By Philip Pullella; Editing by David Goodman)