It may be early October, but parts of the northern United States have been transformed into a winter wonderland as an early-season snowstorm unloads record-setting snow across the region.

This is the second storm in less than two weeks to spread snow over parts of the northern U.S. However, unlike the late-September storm, this new storm is stronger and forecast to evolve into a full-on blizzard by week’s end.

Snow started to fall on Tuesday from the Cascades to the northern Rockies as the storm began to unfold.

Spokane, Washington, was one town that was hit particularly hard by the snow on Tuesday. A record-breaking 3.3 inches of snow fell, the first measurable snow in the month of October since 2001. It also made this month the third-snowiest October on record, following 3.9 inches in October of 1975 and 6.1 inches in October of 1957.

While this may not sound like an excessive amount of snow, it accumulated on trees that still had yet to shed their leaves ahead of winter. The weight of this snow caused large limbs to snap and, in some cases, entire trees to fall.

By Wednesday morning, the worst of the storm had shifted east, focusing on Montana. One of the snowiest spots was just south of Helena, Montana, where a National Weather Service trained spotter measured over 16 inches of snow and ‘significant drifting.’

Snow from this storm brought the two-week snow total in Great Falls, Montana, to over 26 inches. This is more snow than the city received from September through December of last year.

Not only did the snow cause problems, but so did the gusty winds. Whiteouts were reported around Leader, Montana, where sustained winds of 30 mph and gusts over 40 mph were blowing around the fresh powder that blanketed the landscape.

People traveling across the region found it difficult to navigate through mountain passes, including those along I-90 and I-15. Part of I-15 in Idaho was closed on Wednesday due to blowing and drifting snow.

Those who are traveling by plane may also see some delays and cancelations. Delta issued a travel waiver due to the winter weather.

The snowstorm was preceded by a sharp cold front that seemed to cause the seasons to change in just a matter of hours.

Temperatures tumbled in Great Falls as the front moved through, causing the mercury to plummet 20 degrees in just 25 minutes.

A similar story unfolded in Billings, Montana. Residents across the city experienced what felt like a late-summer day on Tuesday with highs in the mid-70s, but by Wednesday morning, temperatures were barely hanging onto the 20-degree mark, more typical of a late-November morning.

The worst of the storm is still ahead as it strengthens over the northern Plains.

„In portions of the northern Plains, the visibility is likely to dip below one-quarter of a mile with frequent winds topping at 40 mph, which is the criteria for blizzard conditions,” he added.

Denver is also forecast to get its first snow of the season, although the city will not have blizzard conditions like areas farther north.

The combination of the cold air and biting winds will also cause dangerously low AccuWeather RealFeel® Temperatures in part of the Plains.

Download the free AccuWeather app to see when snow could impact your area. Keep checking back for updates on AccuWeather.com and stay tuned to the AccuWeather Network on DirecTV, Frontier and Verizon Fios 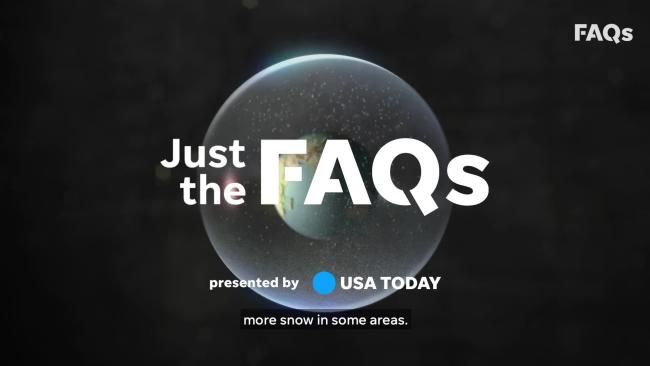 A „potentially historic” winter storm will slam the north-central USA over the next few days with up to 2 feet of snow possible in some areas.

Snow will accumulate from eastern Washington and Montana to Colorado, the Dakotas, Minnesota and northern Wisconsin, the Weather Channel said. Record low temperatures are also possible Thursday and Friday across the western USA.

The system  will produce severe storms and heavy rain Thursday in the southern Plains and critical-to-extreme fire weather threats from the central and southern Rockies to California, the National Weather Service said.

The size and intensity of this snowstorm are unheard of for October, according to AccuWeather.

Driving conditions are deteriorating across Montana and northern Wyoming as ice and blowing snow covered roadways.

Related: A snowstorm will wallop central USA this week, plunging temps as much as 60 degrees in one day

A slew of winter storm warnings, watches and freeze warnings were in effect across parts of seven states as the storm ramped up Wednesday, AccuWeather said.

Denver and Minneapolis could see their first snow of the season, the Weather Channel said.

Temperatures are forecast to dip to record-challenging levels in the wake of the snowstorm pounding the Northwest: http://ow.ly/i6O830pGPRH 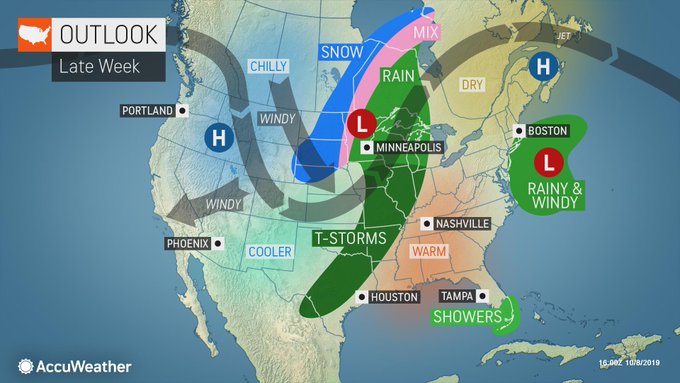 The storm will have two parts, the first of which is targeting the northern and central Rockies and High Plains on Wednesday into Thursday. The second part will bring snow to the eastern and central portions of the Dakotas and western Minnesota by week’s end.