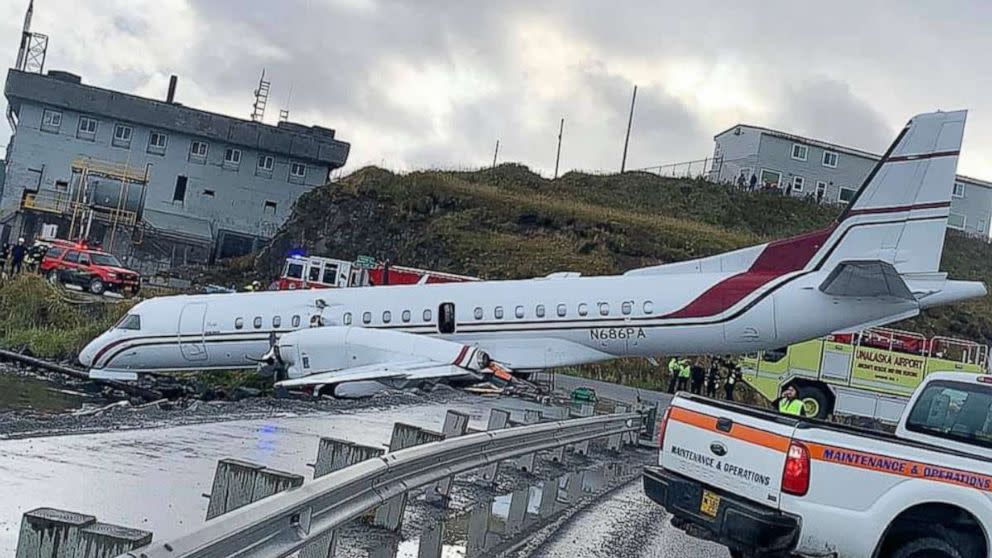 Passenger dies from Alaska plane crash (ABC News)2 hurt after plane carrying high school swim team overshoots runway: Report originally appeared on abcnews.go.com A twin-engine Alaska Airlines flight from Anchorage to Unalaska Island overshot the runway and stopped just short of plunging into the waters of the bay Thursday evening.Two aboard were critically hurt and 10 others were treated for injuries, according to reports — but members of a high school swim team aboard the flight were said to be OK following the harrowing incident.Alaska Airlines Flight 3296, operated by Peninsula Airways, ran off the runway while landing at Alaska’s Unalaska/Dutch Harbor Airport, airline officials said in a statement.

PHOTO: Alaska Airlines Flight 3296, operated by Peninsula Airways, sits at the edge of Unalaska Bay after running off the runway while landing at Unalaska/Dutch Harbor Airport, Oct. 17, 2019. (Ryan Burnias)The plane, a Saab 2000 turboprop, had three crew members and 39 passengers aboard, including members of the swim team at Alaska’s Cordova High School.”At present, all students and chaperones are accounted for and are OK, albeit a bit shaken up,” read a statement posted by superintendent Alex Russin on the school district’s website Thursday night.Related Video: Airplane Dangles Upside Down After Crashing Into Ski Lift WiresAirplane dangles upside down after crashing into ski lift wires 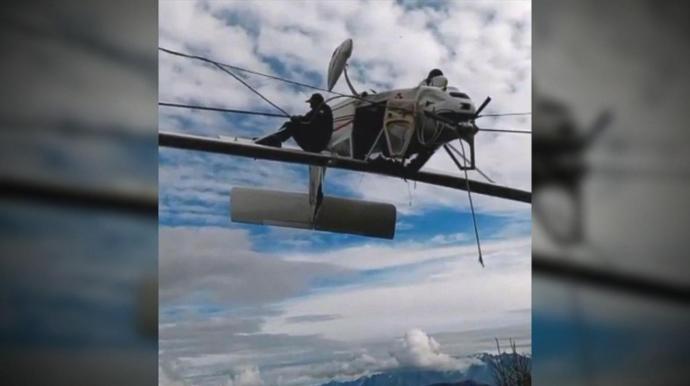 Scroll back up to restore default view.(MORE: Quick-thinking crew member stops runaway cart from striking airplane on tarmac)The statement said that „the team was together, seemed fine, and were eating pizza.”Peninsula Airways said in a statement that two passengers were critically injured and 10 others were receiving medical care, according to the Associated Press.

PHOTO: Alaska Airlines Flight 3296, operated by Peninsula Airways, sits at the edge of Unalaska Bay after running off the runway while landing at Unalaska/Dutch Harbor Airport, Oct. 18, 2019. (Ryan Burnias)Interim Police Chief John Lucking said there were no casualties, according to Unalaska TV station KUCB.(MORE: Searchers find possible crash site of private plane that vanished without a trace)Photos taken afterward showed the plane resting at about at 30-degree angle on a rocky embankment, with its nose just feet from the water.

PHOTO: A commuter plane that crashed near the airport in a small town near the Bering Sea, Oct. 17, 2019. The Peninsula Airways flight from Anchorage to Dutch Harbor came to a halt just short of the water. (Courtesy Jesse Ortiz)Freelance photographer Jim Paulin, who witnessed the accident, told the Associated Press that the plane appeared to have been forced beyond its planned landing area by high winds that the area had been experiencing lately.Unalaska Island is part of the Aleutian Island chain to the west of the Alaskan mainland.
Tropical Storm Nestor forms, threatening US Gulf Coast
BRENDAN FARRINGTON
,Associated Press•October 19, 2019 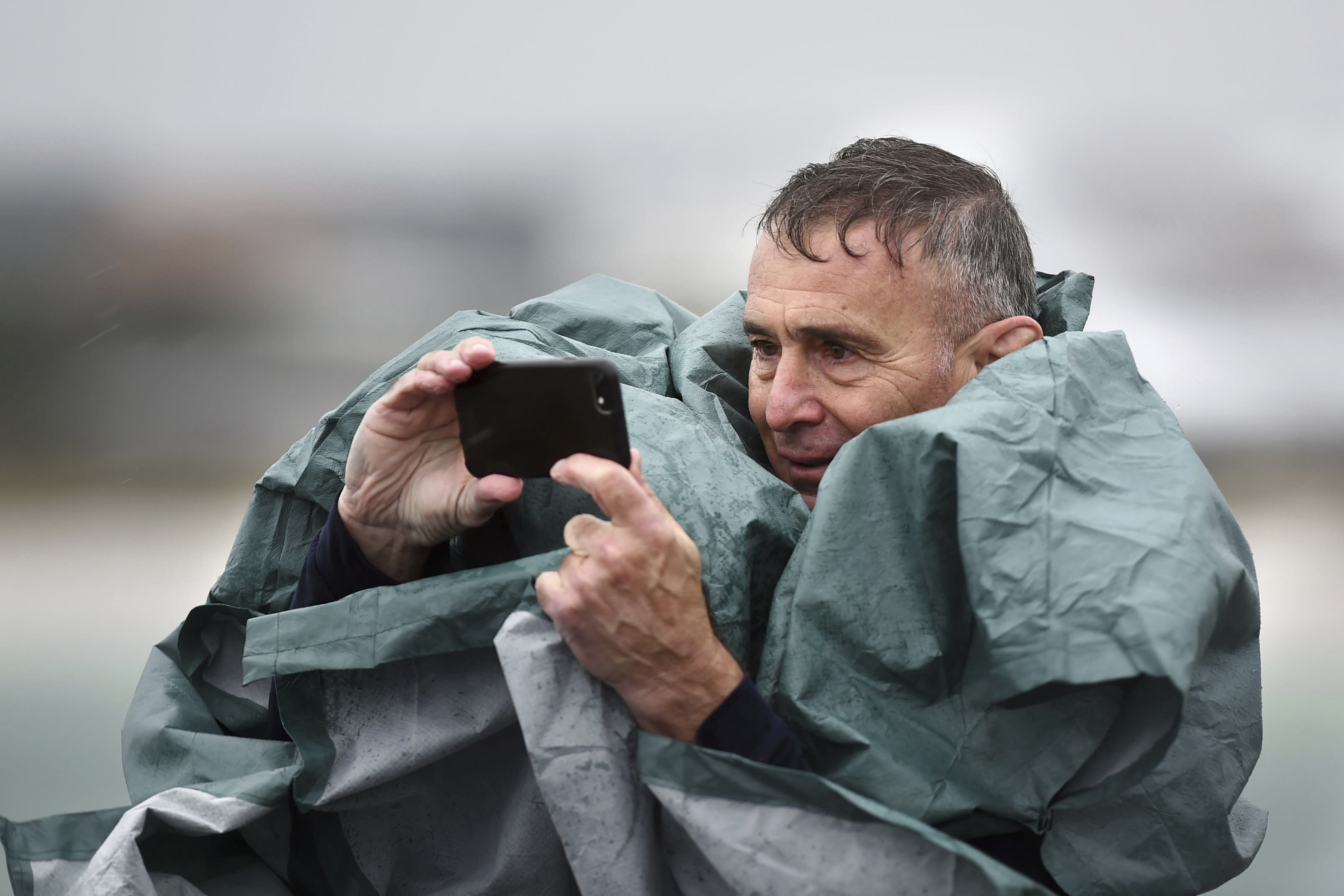 Florida Tropical Weather
Ralph LoBue braves the wind at the end of the Okaloosa Island Fishing Pier near Fort Walton Beach, Fla., as he takes a picture of his son, Danny, and the fish he caught on Friday, Oct. 18, 2019. Newly formed Tropical Storm Nestor is racing toward the northern Gulf Coast with high winds, surging seas and heavy rains Friday. (Devon Ravine/Northwest Florida Daily News via AP)TALLAHASSEE, Fla. (AP) — Tropical Storm Nestor bore down on the northern Gulf Coast with high winds, surging seas and heavy rains Friday evening, threatening to hit an area of the Florida Panhandle devastated one year ago by Hurricane Michael.But unlike Michael, a powerful storm that left thousands of people homeless and nearly wiped the Panhandle city of Mexico Beach off the map, Florida wasn’t bracing for a catastrophe.”We’ve done very little preparation only because there’s nothing really to prepare for,” said Mexico City Beach Mayor Al Cathey. „We haven’t seen any alarm at all.”As of Friday evening, the state had activated its emergency operations center, but only at its lowest level. In an area that’s recently gone weeks without rain, the storm was seen more as a welcome sight.”You have to keep it in perspective: 75 percent of our city was destroyed,” Cathey said. „A little rain is welcome. Hopefully it won’t be something crazy, but if that’s all it is, I can deal with that. There’s nothing in this system that I’ve seen that tells me Mexico Beach needs to be alarmed.”Nestor was forecast to hit the coast around Mexico Beach on Saturday morning without strengthening into a hurricane. Blasted by Michael in October 2018, the area is still trying to recover.The National Hurricane Center said high winds and dangerous storm surge were likely along parts of the northern Gulf Coast. And heavy rains had already began pelting parts of the coastline Friday evening, welcome relief for a parched region dealing with a drought.With conditions deteriorating by the hour, events including high school football games were canceled or postponed.But officials were trying to calm fears of a hard hit similar to Michael last year.Forecasters said Nestor was centered Friday night about 140 miles (225 kilometers) southwest of Panama City, Florida. It had top sustained winds of 60 mph (95 kph) and was moving to the northeast at 23 mph (37 kph).A tropical storm warning was in effect from Navarre, Florida, to Yankeetown, Florida. A storm surge warning is in effect for Indian Pass, Florida, to Clearwater Beach, Florida.The hurricane center said Nestor was expected to head inland across the Panhandle on Saturday morning and cross parts of the Southeast over the weekend before moving into the Atlantic off North Carolina by late Sunday.

Forecasters expect blustery winds and heavy rain in parts of Alabama, Georgia and northern Florida, reaching the Carolinas and Virginia by Sunday.

The Coast Guard said 20-foot (6-meter) seas were possible around Panama City, and dangerous rip currents were possible along beaches during what is still a busy tourism period.

In New Orleans, winds hampered crews that were trying to place explosives to topple to damaged construction cranes towering over a partially collapse hotel project at the edge of the French Quarter. Officials delayed plans to bring down the structures before Nestor approached.

High schools from Alabama to the eastern Florida Panhandle called off football games scheduled for Friday night, and officials in Panama City tried to assure residents that the storm wouldn’t be a repeat of Category 5 Hurricane Michael last year.

„We are optimistic this will be a slight wind and rain event,” said Bay County Sheriff Tommy Ford.

The system could dump from 2 to 4 inches (5 to 10 centimeters) of rain from the central Gulf Coast to the eastern Carolinas, where many areas are dried out from weeks without rain, and as much as 6 inches (15 centimeters) in spots, forecasters said.

Seawater pushed inland by the storm could rise as much as 5 feet (1.5 meters) as storm surge in Florida’s Big Bend region, much of which is less-developed than the rest of the state’s coast.

AccuWeather•October 18, 2019 Strong northerly winds, known as ‘sundowners,’ will create an extended period of high fire danger over a large part of Southern California.The winds and the fire risk will continue through Sunday night and can be strongest in some cases during the evening and overnight hours.”Dry, warm air accompanying the winds will add significantly to the fire threat by making brush more flammable,” according to AccuWeather Meteorologist Courtney Travis.

Winds will average 15-30 mph through the north/south canyons, through the passes and over the ridges. However, frequent gusts between 40 and 50 mph are anticipated with AccuWeather StormMax™ gusts of 60 mph forecast.”Any existing or new fires will have the potential to behave erratically and rapidly grow,” Travis said.

Winds can be strong enough in some cases to dislodge power lines and lead to sparks. In a few cases, minor property damage can occur from the winds.People should avoid using open flames, outdoor power equipment or partaking in any activity that can potentially produce sparks. The hot exhaust system of vehicles that have been running for a few minutes or more can start a fire if parked over dry brush.The strong winds are being coaxed by a strong storm that will push inland over the Northwestern states.

A compensating area of high pressure just south of that storm will boost the southward flow of air into Southern California.

As both systems push farther inland, winds will generally ease by early next week.

However, a weak Santa Ana event can follow and prolong the risk of locally gusty winds along with surging temperatures for a few more days.

Temperatures on Monday and Tuesday are likely to average 5-10 degrees Fahrenheit higher than that of the start of this weekend. For example, highs in downtown Los Angeles are forecast to be near 80 on Saturday, but highs are likely to be in the lower 90s on Monday and Tuesday.Download the free AccuWeather app to see the latest forecast and advisories for your region. Keep checking back for updates on AccuWeather.com and stay tuned to the AccuWeather Network on DirecTV, Frontier and Verizon Fios. 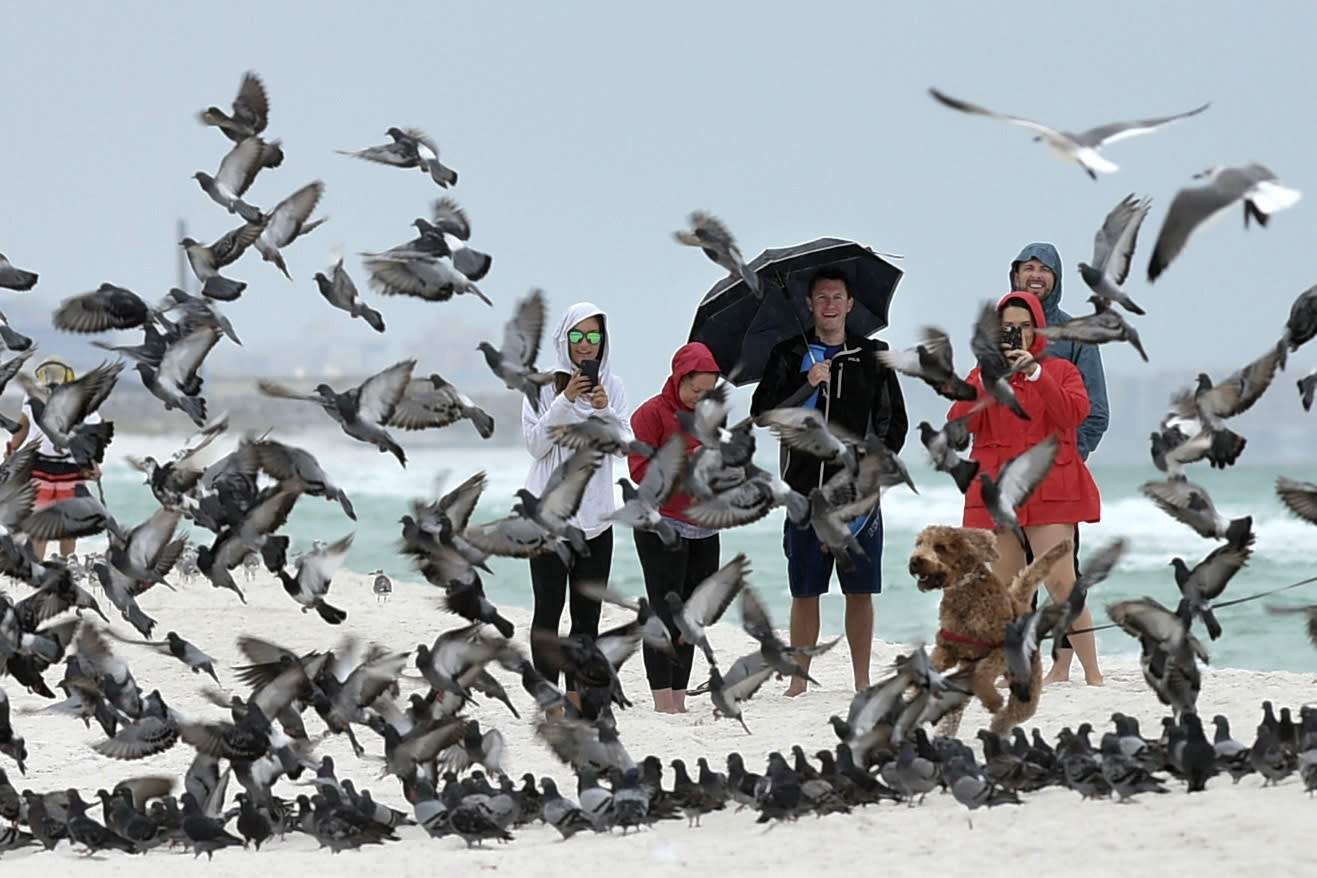 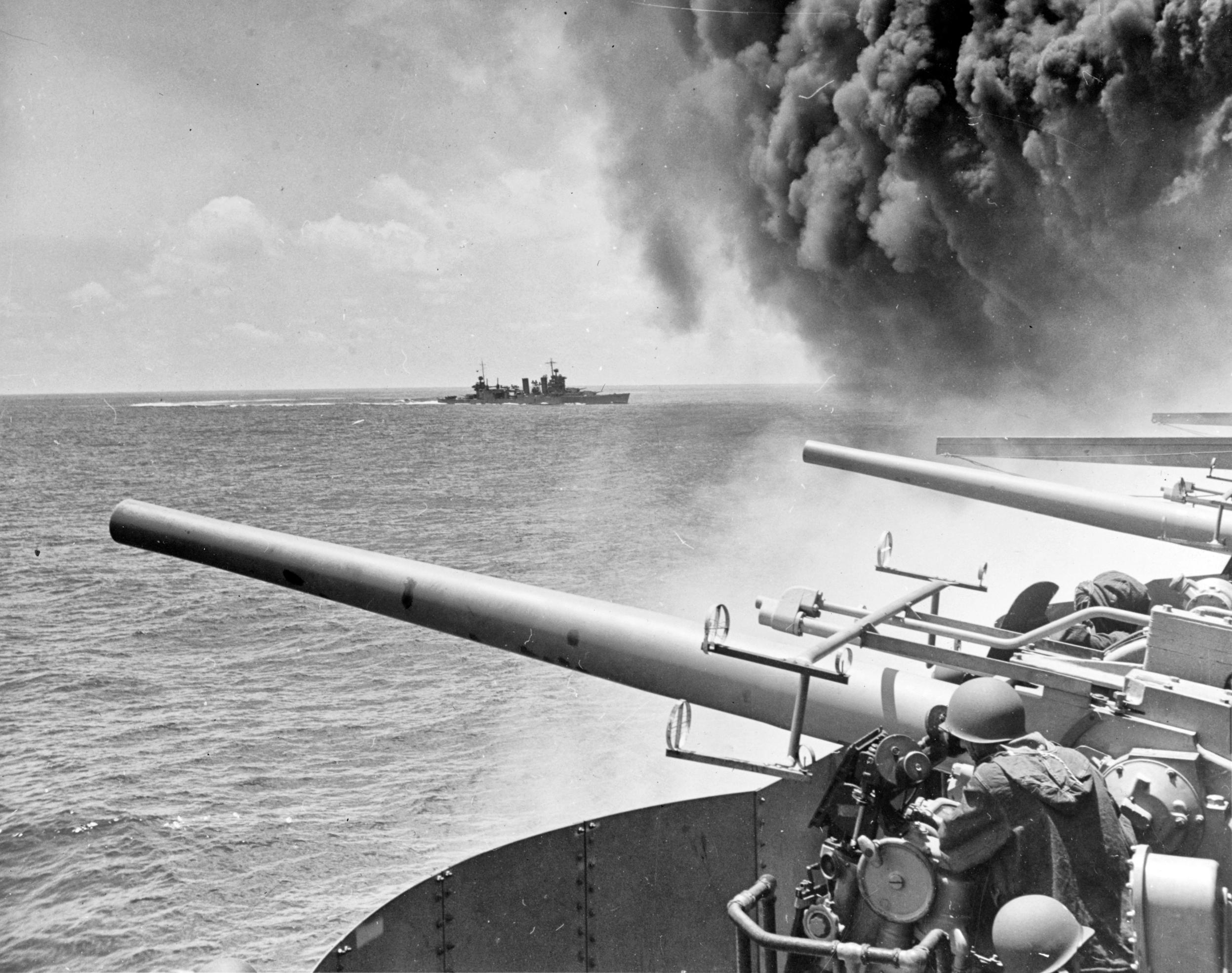 Battle of Midway-Sunken Warship FILE – In this June 4, 1942 file photo provided by the U.S. Navy the USS Astoria (CA-34) steams by USS Yorktown (CV-5), shortly after the carrier had been hit by three Japanese bombs in the battle of Midway. Researchers scouring the world’s oceans for sunken World War II ships are honing in on debris fields deep in the Pacific. A research vessel called the Petrel is launching underwater robots about halfway between the U.S. and Japan in search of warships from the Battle of Midway. (William G. Roy/U.S. Navy via AP, File)MIDWAY ATOLL, Northwestern Hawaiian Islands (AP) — Deep-sea explorers scouring the world’s oceans for sunken World War II ships are focusing in on debris fields deep in the Pacific, in an area where one of the most decisive battles of the time took place.Hundreds of miles off Midway Atoll, nearly halfway between the United States and Japan, a research vessel is launching underwater robots miles into the abyss to look for warships from the famed Battle of Midway.Weeks of grid searches around the Northwestern Hawaiian Islands already have led the Petrel to one sunken warship, the Japanese aircraft carrier Kaga. This week, the crew is deploying equipment to investigate what could be another.Historians consider the Battle of Midway an essential U.S. victory and a key turning point in WWII.”We read about the battles, we know what happened. But when you see these wrecks on the bottom of the ocean and everything, you kind of get a feel for what the real price is for war,” said Frank Thompson, a historian with the Naval History and Heritage Command in Washington, D.C., who is onboard the Petrel. „You see the damage these things took, and it’s humbling to watch some of the video of these vessels because they’re war graves.”Sonar images of the Kaga show the bow of the heavy carrier hit the seafloor at a high rate of speed, scattering debris and leaving an impact crater that looks as if an explosion occurred in the ocean. The front of the vessel is buried in mud and sediment after nose-diving about 3 miles (4.8 kilometers) to the bottom.The U.S. bombs that struck the Kaga caused a massive fire that left it charred, but the ship stayed mostly together. Its guns, some still intact, stick out the side.Until now, only one of the seven ships that went down in the June 1942 air and sea battle — five Japanese vessels and two American — had been located.The expedition is an effort started by the late Paul Allen, the billionaire co-founder of Microsoft. For years, the crew of the 250-foot (76-meter) Petrel has worked with the U.S. Navy and other officials around the world to find and document sunken ships. It is illegal to otherwise disturb the underwater U.S. military gravesites, and their exact coordinates are kept secret.The Petrel has found 31 vessels so far. This is the first time it has looked for warships from the Battle of Midway, which took place six months after Japan’s attack on Pearl Harbor and left more than 2,000 Japanese and 300 Americans dead.