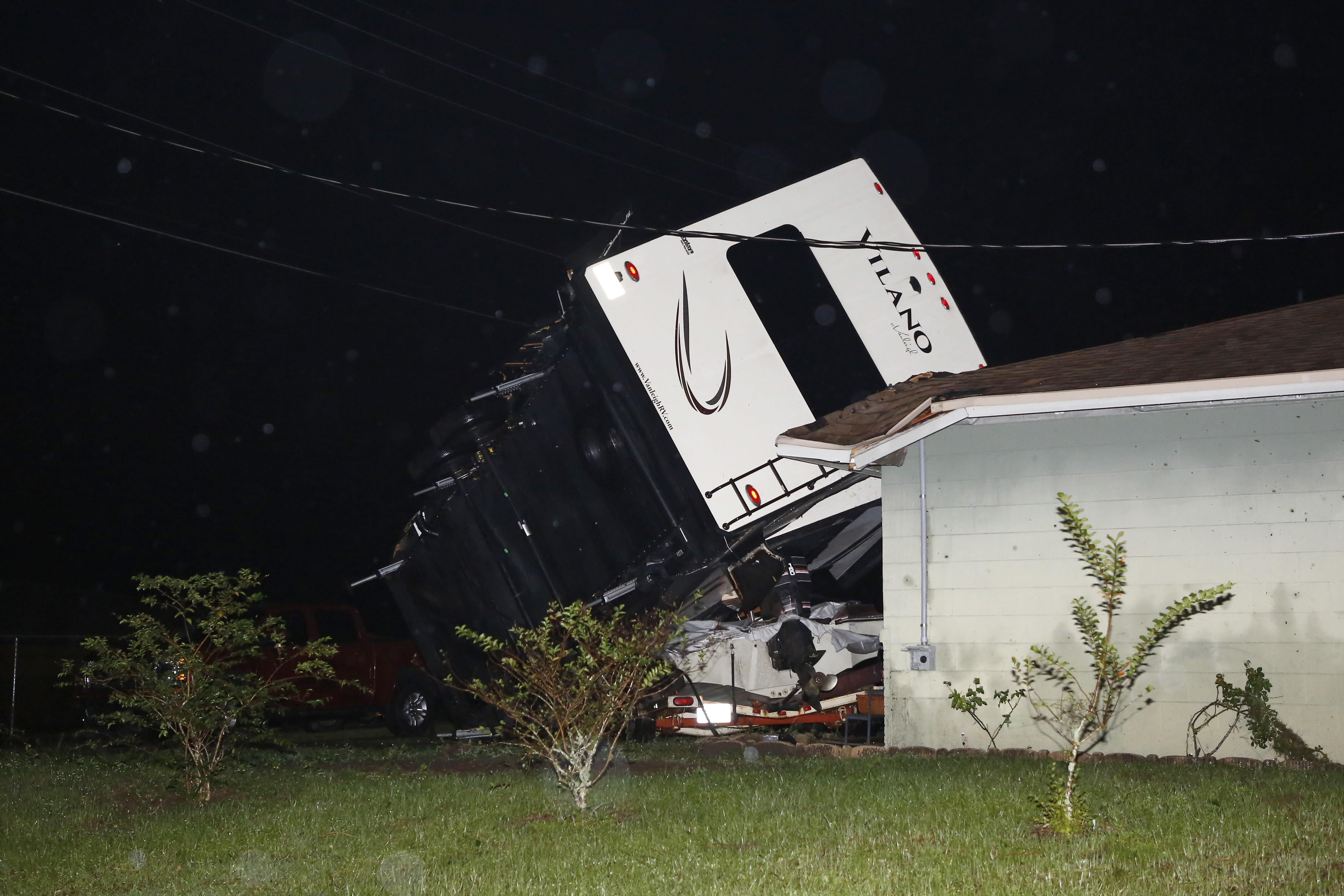 Tropical Weather A camper rests on top of a boat trailer and the corner of a home as Tropical Storm Nestor passed the area on Saturday, Oct. 19, 2019 in Kathleen, Fla. Nestor was downgraded Saturday after it spawned a tornado that damaged several homes. (Luis Santana/Tampa Bay Times via AP)TALLAHASSEE, Fla. (AP) — Nestor raced across Georgia as a post-tropical cyclone late Saturday, hours after the former tropical storm spawned a tornado that damaged homes and a school in central Florida while sparing areas of the Florida Panhandle devastated one year earlier by Hurricane Michael.The storm made landfall Saturday on St. Vincent Island, a nature preserve off Florida’s northern Gulf Coast in a lightly populated area of the state, the National Hurricane Center said.Nestor was expected to bring 1 to 3 inches of rain to drought-stricken inland areas on its march across a swath of the U.S. Southeast. Forecasters said it also was raising an overnight threat of severe weather in the Carolinas as it continued to speed toward the Atlantic Ocean.While all tropical storm and surge warnings had been canceled by Saturday afternoon in Florida, the storm escalated weekend threats of possible twisters and severe thunderstorms elsewhere in the South.The storm spun off at least three tornadoes in Florida as it moved north through the Gulf that caused damage.The Polk County Sheriff’s Office said several homes were damaged and Kathleen Middle School had a large section of its roof torn off when the tornado hit late Friday near Lakeland, about an hour’s drive southwest of Orlando.Photos posted by The Ledger newspaper showed a home with a destroyed roof, downed trees, a large recreational vehicle thrown onto its side and vehicles buried under debris. About 10,000 homes were without power Saturday.”Thankfully, we have not had any reported serious injuries,” Sheriff Grady Judd said in a Saturday statement. „However, there are many people dealing with damage to their homes and property this morning, some of it severe.”Another suspected tornado in southwest Florida damaged at least a dozen homes in Cape Coral, some severely, the police department said in a statement. No injuries were reported. Another tornado was reported in Pinellas County, producing minor damage at a mobile home park.In Georgia, remnants of the storm spread heavy rains and triggered two National Weather Service warnings of potential twisters in the state’s south on Saturday evening. Radar indicated possible tornados separately in areas around Rhine and Vienna, Georgia. But there was no immediate confirmation of any tornadoes and no injuries or damages were reported.Elsewhere, news outlets reported some downed trees and power lines in metro Atlanta as heavy rains spread across Georgia. Photographs showed downed trees blocking some roadways.In Mexico Beach, Florida, where a powerful October 2018 storm nearly wiped out that Panhandle town and left thousands homeless, the mayor said Saturday that Nestor brought some needed rain to a portion of the state suffering from drought. But there was no damage there.”There have been no issues,” said Mayor Al Cathey, whose city is still recovering from Michael. „I would call us fortunate.”_Spencer reported from Fort Lauderdale, Florida.