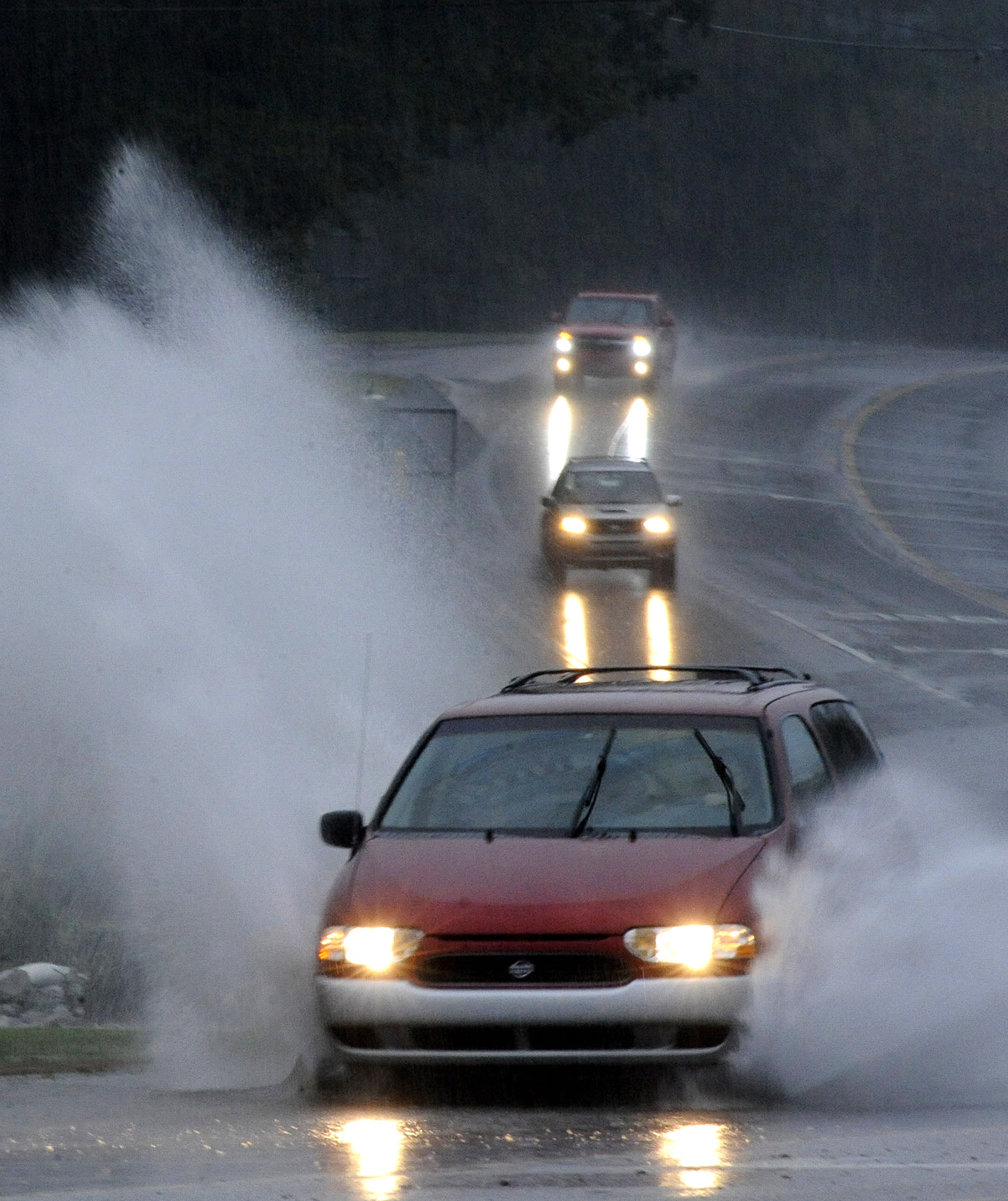 Cars travel along a partially flooded road in Helena, Ala., on Friday, Oct. 25, 2019. The National Weather Service said a disturbance in the Gulf of Mexico that could briefly become a tropical weather system was combining with a cold front to dump heavy rains across the parched region. (AP Photo/Jay Reeves)BIRMINGHAM, Ala. (AP) — The Latest on tropical weather in the South (all times local):10:10 p.m.–Olga has been downgraded to a post-tropical cyclone as it continues churning toward the Gulf Coast.The National Hurricane Center said Friday night that the cyclone will bring heavy rain and possibly flash floods across the central Gulf Coast and parts of the Lower Mississippi Valley and western Tennessee Valley.Olga had maximum sustained winds of 50 mph (80 kph) and was centered about 275 miles (443 kilometers) south-southeast of Lake Charles, Louisiana on Friday night. It was moving north-northeast at 17 mph (27 kph).It’s expected to weaken as it moves over land on Saturday morning._4:55 p.m.A tornado has been reported on the ground in southwestern Alabama.The National Weather Service on Friday afternoon issued a tornado warning for Mobile County.The National Weather Service in Mobile tweeted that a there was a large and dangerous” tornado on the ground near Semmes, Alabama and people should seek shelter immediately. A second possible tornado was in Washington County.There were no immediate reports of injuries.WKRG reported that viewers sent in video of what appeared to be a large tornado on the ground._3:45 p.m.Forecasters say Tropical Storm Olga has formed in the Gulf of Mexico while Tropical Storm Pablo has formed in the northeast Atlantic.On Friday afternoon, the National Hurricane Center said the storm is expected to soon merge with a cold front and become a post-tropical low with gale force winds.The storm has maximum sustained winds of 40 mph (64 kph) and was centered about 260 miles (418 kilometers) south of Lake Charles, Louisiana. It’s moving north-northeast at 18 mph (29 kph).Forecasters expect the storm’s center to move over the northern Gulf coast late Friday or early Saturday.No coastal tropical cyclone watches or warnings are currently in effect.Officials say Tropical Storm Pablo is a small storm that is moving east-southeast. There are no coastal tropical cyclone watches or warnings in effect._10:45 a.m.Parts of the drought-parched South are under flood watches and warnings with forecasters saying as much as 10 inches of rain could fall.The National Weather service says an advancing cold front will collide with a weather disturbance that became a tropical depression early Friday in the Gulf of Mexico.The National Hurricane Center said the storm’s center was 320 miles (515 kilometers) south-southwest of Lake Charles, Louisiana. It had maximum sustained winds of 35 mph (55 kph).Forecasters say coastal Louisiana could receive as much as 10 inches (25 centimeters) of rain Friday and Saturday; 6 inches (15 centimeters) was possible across a wide section of Mississippi.Rainfall totals ranging from 1 to 4 inches (2.5 to 10 centimeters) are possible from Alabama to South Carolina. 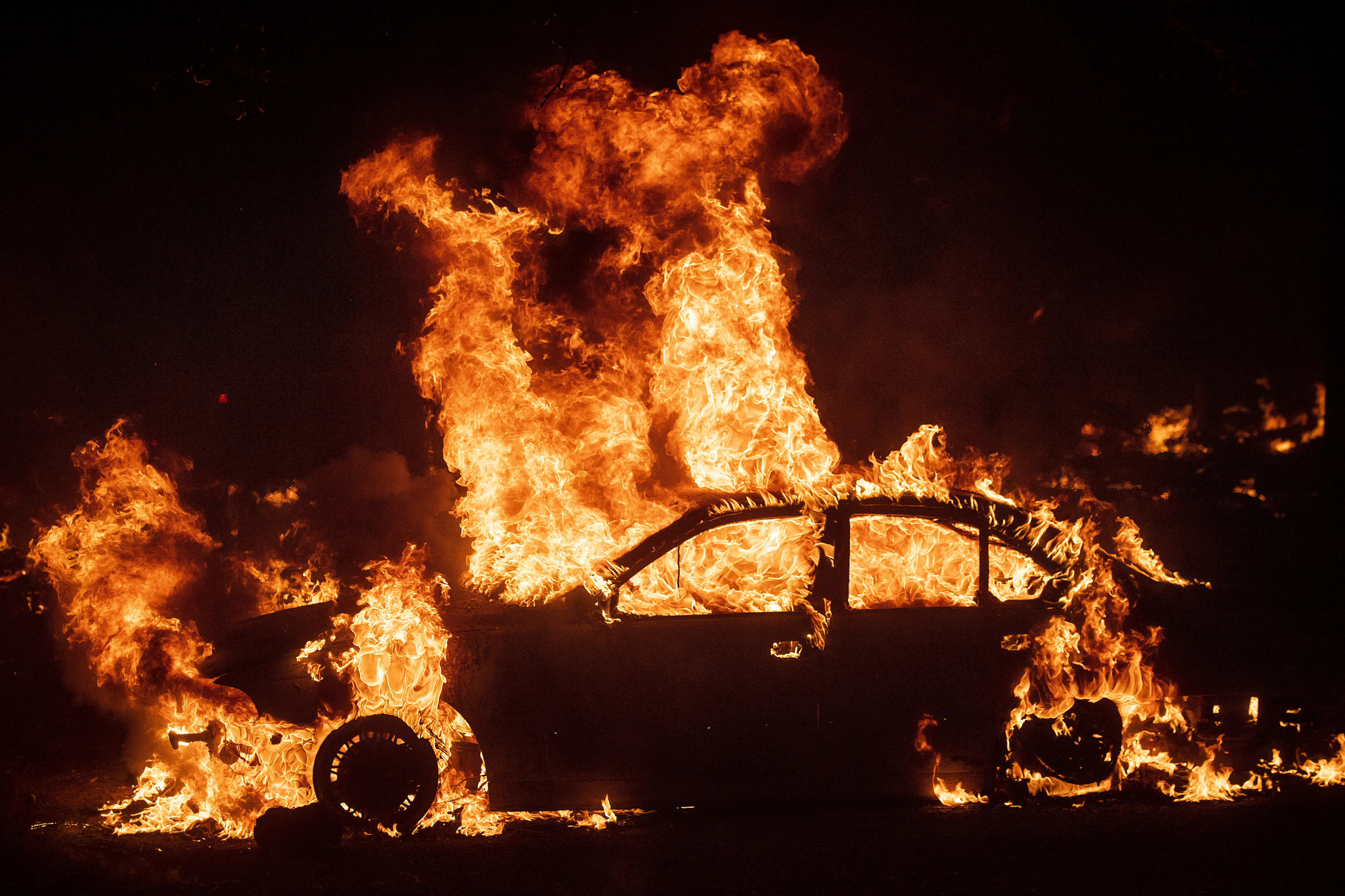 Pictures Of The Week Photo Gallery

Flames from the Kincade Fire consume a car in the Jimtown community of unincorporated Sonoma County, Calif., on Thursday, Oct. 24, 2019. Wildfires are growing deadlier and more destructive amid climate change. (AP Photo/Noah Berger)

LOS ANGELES (AP) — Howling winds that fueled destructive wildfires across California began to die down Friday, but residents in the northern part of the state braced for another round of power outages aimed at preventing what are expected to be the strongest gusts in years from sparking more blazes this weekend.

Fires destroyed dozens of buildings in Northern California wine country and in subdivisions on the outskirts of Los Angeles, where flames shut down a freeway and smoke forced schools to close. Officials are trying to gain some control of the flames as the wind tapers off — for now.

California’s largest utility admitted its electrical equipment may have ignited the wildfire amid Sonoma County’s vineyards despite blackouts imposed to prevent blazes.

Even as Pacific Gas & Electric restored power to most of the half million people without electricity, it warned of outages that could hit 2 million in north and central parts of the state from Saturday until Monday.

PG&E resorted to shutoffs after equipment malfunctions and trees blowing into power lines sparked several blazes in recent years that killed scores of people, burned thousands of homes and ran up billions of dollars in claims that drove the utility into bankruptcy.

The drastic measure has been widely criticized for poor planning and execution that has left people in the dark even when they weren’t in areas facing fire danger.

Linda York of San Jose was trying to make weekend plans with her teenage grandson but was getting stressed out as she got peppered by text messages from PG&E warning about the possible blackouts.

„You’re watching the clock, and you’re waiting for it to happen,” she said. „It almost feels like the apocalypse is coming.”

The fire near the Northern California town of Geyserville burned at least 49 buildings and 34 square miles (65 square kilometers), prompting evacuation orders for some 2,000 people.

Photo credit: JOSH EDELSON – Getty Images From Esquire Right now, out in sunny California, 50,o00 people have been forced to evacuate their homes. That’s just in Los Angeles, where at least four wildfires are currently ravaging the nation’s second-largest city. The largest is the Tick fire, which is burning through the canyons north of town and scything towards heavily residential areas at pace, The New York Times tells us. All schools in the San Fernando Valley have been closed due to „air-quality and safety concerns.” An entirely separate blaze, known as the Kincade fire, has burned 16,000 acres of Sonoma County. 13,000 firefighters are battling it, but it’s so far only 5 percent contained.The 2019 fire season has actually been a let-off from previous years, particularly the one just past. Only 300 structures have been destroyed so far, compared to 23,000 in 2018. 163,000 acres have burned, compared to 1.6 million (!) last year, though the 2019 season is far from over.In fact, as David Wallace-Wells detailed this year for New York magazine, the fire season never really ends anymore. Both scientists and firefighters have suggested dropping the „season” term. It is always fire season, and fire season is always getting worse, because it is always getting hotter and drier. About half of the 88 cities in Los Angeles county are classified as „Very High Fire-Hazard Severity Zones,” raising the prospect that in the future, the gleaming jewel of the West—our great American dream factory—will come to resemble a very particular kind of hell. After all, as Wallace-Wells tells us, some of these fires grow an acre a second. Some grow three times faster still. You cannot outrun fire traveling 60 miles per hour on the Santa Ana winds.

Photo credit: JOSH EDELSON – Getty ImagesAll this, of course, is just one spasm of our almighty planet’s sprawling reaction to the great disturbance we have caused in it. Someday, we will appreciate that if you put the 4 billion-year history of Earth on a 24-hour clock, human history is the equivalent of one second. We are ants crawling about on a particularly fancy rock in a galactic backwater, one that is determined to maintain an equilibrium we have disrupted. If need be, it will sweep us off like the ants we are, with increasingly powerful storms and incredible rain events and oppressive heatwaves and rising seas and epidemic diseases and failing crops and yes, raging wildfires. In the meantime, we will likely tear each other apart to escape the near-term consequences. But like those fires traveling on the Santa Ana winds, there will be no outrunning them in the end.And all the while, we squabble over taxes and The National Debt and whether the president should be impeached for selling out the national interest in favor of his own when dealing with foreign countries like Ukraine. He should be, of course: he violated his oath of office and abused his power. But someday, assuming we make it that far, future generations will surely wonder why we did not remove him from the world’s most powerful office simply because he denied the existence of a fundamental threat to human civilization as we know it. The president has not just said the climate crisis is a Chinese hoax, or suggested he has some different opinion on whether it’s a problem compared to the scientists—you know, people who have devoted their lives to studying this phenomenon. He has actively rolled back our efforts in pretty much every department, to combat a crisis that will upend not just our children’s lives, but our own.Surely, this constitutes a high crime against humanity. His apparatchiks will laugh at the suggestion now, and call it liberal delusion. But soon enough, they won’t be laughing. The people who actually know a goddamn thing about this say we have 12 years to change course in order to avoid this onrushing doom. The president wants to dig more crap out of the ground. He’d like to force New York State to do it, to abandon its commitment to future generations so some energy executives—who perhaps have some sort of relationship with the president—can make a buck.Donald Trump, for his part, likely figures he’ll be dead and it won’t matter. This is also his view on The National Debt, but at least that’s an overblown problem. His radical solipsism permits him to dismiss small concerns like the future of the human species, not to mention all the other species, which are currently dying off at a prodigious pace in what scientists are calling the sixth mass extinction event. Meanwhile, his rich cronies probably believe they can make enough money to outrun whatever the consequences may be if they’re still around when the time comes. That will require covering an acre a second. Better get your track spikes on.

A 12-year-old boy from Germany died at sea in Italy while on the MSC Divina earlier this week. He was traveling on a European cruise with his family at the time.

Robin Roothans, a spokesperson for MSC Cruises, told USA TODAY that a family sought medical care for their child on around midnight on Monday.

He became ill as the ship sailed from Palermo, on the northern coast of Sicily, westward toward Cagliari, in southern Sardinia, and died at sea.

„While the staff of our Medical Center reacted promptly, the health status of the child unexpectedly deteriorated,” Roothans said. „Despite several attempts to resuscitate the child, he unfortunately passed away.”

MSC’s website notes that its medical centers are all supervised by a ship’s doctor and other medical personnel.

„The Medical Centre is open at the times advertised in the ship’s Daily Programme. Emergency services are available round the clock by calling the Medical Emergency number. Excluding emergencies, medical services carry a fee and prices are available onboard. Guests who incur medical expenses during their cruise can ask their insurance company for reimbursement once ashore,” the site states.

As of Thursday evening, MSC Cruises was still unclear on the cause and manner of the child’s death. Roothans said the company is working with authorities in order to follow guidelines and facilitate any investigation or examination that may be required.

She added that MSC is working with embassy and consulate personnel „to assist the family with the repatriation of the child as quickly as possible. We are offering our full support to the family at this extremely difficult time and a dedicated care team onsite is providing support and comfort.”

Cruises: 10 of the most cringeworthy bad habits and how to break them

Doing it for the ‘gram? Royal Caribbean says no to that, bans guests for life

The cruise, which embarked on its journey from Genoa, Italy, has continued on its way and is on schedule.