First Snowfall of the Season Set to Begin in the Northeast, Areas Around the Country

First Snowfall of the Season Set to Begin in the Northeast, Areas Around the Country Some areas around the country will see their first snowfall of the season this week, and others are already experiencing a taste of the snow to come.

According to the Weather Channel, the interior Northeast is set for snow late this week, while areas along the coast will experience rain. The snow is expected to begin falling lightly from the mid-Mississippi Valley into the Ohio Valley and interior Northeast on Thursday, the outlet reported.

Upstate New York will get a combination of snow and rain until transitioning only to snow on Thursday night. The same goes for areas stretching from central Pennsylvania into central New England, which may see rain change into snow early Friday morning.

The snowfall will likely be the first of the season for cities such as Buffalo and Syracuse, New York; Burlington, Vermont; and Bangor, Maine.

“Residents throughout the Northeast, from Pittsburgh to Buffalo, New York, Boston and Bangor, Maine, will want to keep a close eye on this system for the potential for slippery, slushy roads and significant travel delays Thursday night and Friday,” said AccuWeather meteorologist Tom Kines.

First #snow of the season will blanket parts of the Northeast late this week: https://weather.com/storms/winter/news/2019-11-05-northeast-first-snow-early-november-rain-coast … 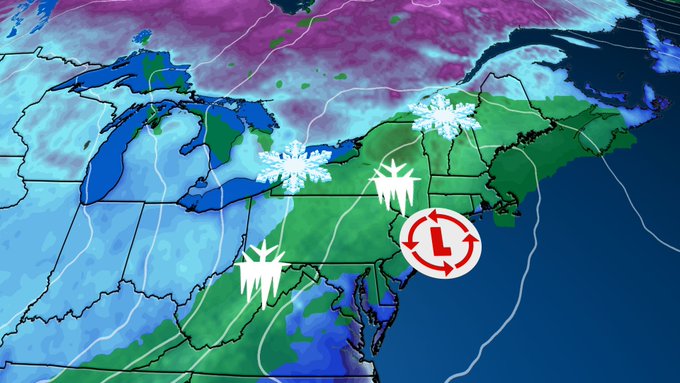 “The core of cold will gradually shift from the northern Plains into the Great Lakes and Northeast from Wednesday through Saturday, making it feel more like the middle of winter rather than early November in some places,” added AccuWeather reporter Jake Sojda.

WJW reported that parts of northeast Ohio experienced their first snow of the season as far back as Halloween, and in early October, parts of Colorado had been hit with up to 6 inches of snow, with 2.1 inches reported in Denver, according to KDVR.

RELATED VIDEO: Boat is Dislodged by Severe Storm After Being Trapped on Niagara Falls Rocks for 101 Years

Washington’s Spokane International Airport broke a snowfall record set almost 40 years ago, recording 3.3 inches of snow in October, according to USA Today. Over 32,000 customers were left without power because of the storm.

Montana has also been hit by the winter storms, as temperatures in Billings fell from 74 to 25 degrees in 24 hours, according to the outlet.