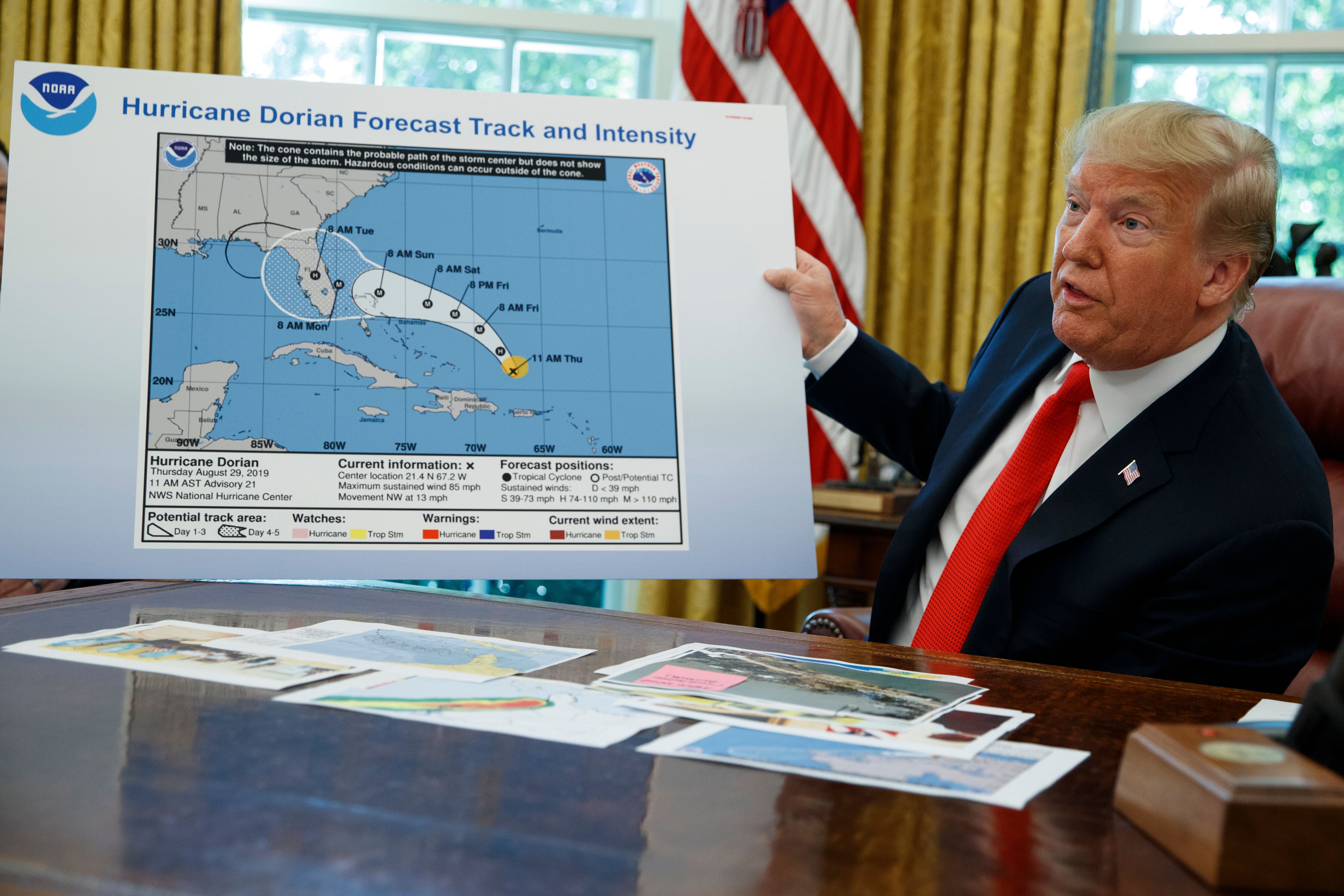 NOAA Emails Show Turmoil After Trump Tweeted Hurricane MisinformationA trove of emails made public Thursday reveal the frustration, anger and turmoil in federal weather agencies after President Donald Trump incorrectly warned that Alabama was under threat of being hit by Hurricane Dorian.

Donald J. Trump@realDonaldTrump In addition to Florida – South Carolina, North Carolina, Georgia, and Alabama, will most likely be hit (much) harder than anticipated. Looking like one of the largest hurricanes ever. Already category 5. BE CAREFUL! GOD BLESS EVERYONE!4:51 PM – Sep 1, 2019Trump’s warning on Sept. 1 was at best days out of date. He attempted to back up his inaccurate information later by presenting a map in the Oval Office that included a primitively drawn circle around a portion of Alabama on a weather map to make it appear as if the state was in Dorian’s projected path. “This has really gotten out of hand,” Chris Darden, the meteorologist in chief at the National Weather Service office near Birmingham, wrote in one of the emails released by the National Oceanic and Atmospheric Administration. He complained that meteorologists were being deluged by media requests seeking clarification after Trump’s tweet. In an earlier email, Darden detailed his office’s confusion after receiving an “inordinate number of questions concerning Dorian and potential impacts” in Alabama from “anxious and panicked citizens.” Unaware that Trump was the source of the faulty information, the staff “deemed it prudent to provide some type of clarification on official social media channels” as Alabamans clogged highways to get out of Dorian’s supposed path.

NWS Birmingham@NWSBirminghamAlabama will NOT see any impacts from #Dorian. We repeat, no impacts from Hurricane #Dorian will be felt across Alabama. The system will remain too far east. #alwx5:11 PM – Sep 1, 2019“Our job is to provide forecasts and weather information in ways that … benefit the lives and safety of the US citizenry,” Darden wrote in the email. “That is clearly what we are doing, and kudos to the day shift for reacting to a need quickly.”Apparently in a bid to help Trump save face, NOAA issued a subsequent message denigrating the work of the Birmingham office, stating that the clarifying tweet was “inconsistent with probabilities from the best forecast products available at the time.” The Associated Press reported that at the time of Trump’s warning, the National Hurricane Center estimated that parts of Alabama had only a 5% to 10% chance of getting tropical-storm-level (not hurricane-level) winds. A House committee and the chief NOAA scientist have since launched an investigation into who was responsible for the unsigned NOAA statement. The New York Times reported that acting White House Chief of Staff Mick Mulvaney directed Commerce Secretary Wilbur Ross, who oversees NOAA and the National Weather Service, to have NOAA publicly refute the forecasters. Ross warned of firings if the statement wasn’t issued, according to the Times.NOAA programmer Alek Krautmann emailed a public affairs officer at the time, saying that the NOAA statement was “deeply upsetting to NOAA employees that have worked the hurricane and not fully accurate based on the timeline in question.”Others said the NOAA message triggered a slew of hate mail against the weather service. Benjamin Friedman, NOAA’s deputy under secretary for operations, forwarded an email from a woman identifying herself as a scientist, lashing the NWS and NOAA’s “boot-licking, pandering” attitude, and telling him to “grow a pair or get out. Stop taking tax money if you can’t do your job.”Friedman noted: “These are getting very personal.” The emails were released in response to Freedom of Information Act requests by a number of media outlets, including The Daily Beast and NBC.Related coverage  House Democrats Unveil Bill To Protect Climate Refugees;Trump Kicks Off Formal Process Of Pulling U.S. Out Of Paris Climate Accords;Scientists Declare A Climate Emergency, Warn Of ‘Untold Human Suffering’;Love HuffPost? Become a founding member of HuffPost Plus today.This article originally appeared on HuffPost.