Judge dismisses Trump lawsuit against NY officials, House committee over taxes by ABC News•November 11, 2019 Court orders President Trump to turn over tax returns Judge dismisses Trump lawsuit against NY officials, House committee over taxes originally appeared on abcnews.go.comA federal judge on Monday issued another blow to President Donald Trump and his ongoing effort to avoid having his tax records turned over to Congress.U.S. Judge Carl Nichols granted a motion to dismiss a lawsuit that Trump filed in July over the TRUST Act in New York, which gave Congress the authority to retrieve tax information from New York residents.In granting the dismissal, he noted that the president, „has not met his burden of establishing personal jurisdiction over either of the New York Defendants.”(MORE: Trump sues House Committee, NY AG, in ongoing effort to block access to his tax records)The president’s lawsuit named the House Ways and Means Committee, New York Attorney General Letitia James and the commissioner of the New York Department of Taxation and Finance, Michael Schmidt. ABC News reported at the time that Rep. Richard Neal, D-Mass., the chairman of the House Ways and Means Committee, has hesitated to use the new law to request the president’s state returns.

PHOTO: President Donald Trump and first Lady Melania Trump listen to Taps during a Veterans Day event at Madison Square Park in New York City, Nov. 11, 2019. (AFP via Getty Images)In their complaint, Trump’s lawyers claimed that Neal had „expressed a renewed interest in utilizing” the statute.Nichols wrote that „such a speculative statement” about Rep. Richard Neal’s „interest in utilizing” the TRUST Act „does not satisfy” the court.Shortly after the judge issued his ruling, New York Attorney General Letitia James released a statement applauding the decision.”We have said all along that this lawsuit should be dismissed and we are pleased with the courtâ€™s conclusion,” James said. „The TRUST Act is an important tool that will ensure accountability to millions of Americans who deserve to know the truth. We have never doubted that this law was legal, which is why we vigorously defended it from the start and will continue to do so.”In response, the president’s personal attorney, Jay Sekulow, downplayed the implications of the ruling.(MORE: House Democrats sue Trump administration for president’s tax returns)”Regarding the tax case out of DC — we are reviewing the opinion,” Sekulow said. „The case against the Ways and Means Committee proceeds in federal court.”Sekulow was referring to a separate lawsuit with similar implications for the president’ highly sought after tax information. The House Ways and Means Committee filed a lawsuit against the Trump administration seeking six years of the president’s tax returns. A judge has not yet ruled on that case.

Former President Jimmy Carter, 95, Hospitalized with Bleeding on the Brain by People•November 12, 2019 Former President Jimmy Carter, 95, Hospitalized After Fall in Georgia Home Jimmy Carter has been hospitalized after the former president experienced bleeding on his brain as a result of his recent falls.The Carter Center released a statement on Twitter explaining that Carter, 95, “was admitted to Emory University Hospital this evening for a procedure to relieve pressure on his brain, caused by bleeding due to his recent falls.”Carter, who is America’s oldest living president, is scheduled to undergo a procedure on Tuesday Morning.The former president is “resting comfortably, and his wife, Rosalynn, is with him,” the statement concluded.Carter’s hospitalization comes after he was admitted to the Phoebe Sumter Medical Center “for observation and treatment” in October after he fell and fractured his pelvis at his home in Plains Georgia. 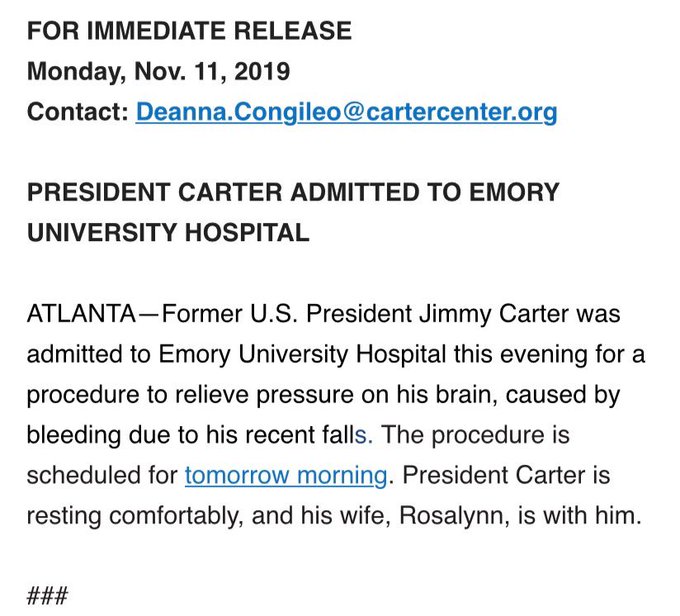 976 people are talking about this

“Former U.S. President Jimmy Carter has been released from Phoebe Sumter Medical Center. He is looking forward to continuing to recuperate at his home in Plains, Georgia, and thanks everyone for their kind well wishes,” Carter’s humanitarian non-profit said in a statement.

A spokesperson for the center described his injury as “minor” at the time and said: “He is in good spirits and is looking forward to recovering at home.”

This was the third time he has fallen this year, and the second time in October. Earlier in October, he received 14 stitches on his head and a black eye following another tumble.

Back in May, he fell at his home and had to undergo surgery on his broken hip.

RELATED: ‘It’s Hard to Live Until You’re 95,’ Jimmy Carter Says: How Wife Rosalynn and His Faith Keep Him Going

None of that stopped Carter from his long-standing commitments to Habitat for Humanity. Just days after his head injury, he was in Nashville, Tennessee, with his wife of more than 73 years — 92-year-old Rosalynn Carter— to lead an annual build for Habitat, erecting and fixing up more than 4,000 homes.

“I fell down and hit my forehead on a sharp edge and had to go to the hospital. And they took 14 stitches in my forehead and my eye is black, as you’ve noticed. But I had a number one priority and that was to come to Nashville and build houses,” he reportedly told the crowd in Nashville, according to CNN.

In the past, Carter has fought health battles, including a bout of cancer in 2015.

In November, while teaching at Maranatha Baptist Church in his hometown, Carter reflected on his cancer treatment.

His parents and siblings had all died of cancer years before him, and he did not expect to survive either after learning that the disease had infected his brain.

“I assumed, naturally, I was going to die very quickly,” Carter told the congregation, according to ABC.

“I said a prayer about it,” he said. But Carter “didn’t ask God to let me live.”

He was looking for peace of mind, according to The Atlanta Journal-Constitution: the right way to face whatever was coming next.

“I found that I was absolutely, completely at ease with death,” he said, according to the AJC. Instead, he survived, thanks in part to innovative immunotherapeutic treatments.

During the Sunday school lesson, Carter also talked about his evolving views on the Christian promise for the devout of eternal life and resurrection, according to ABC and the AJC.

He said that while he’d had earlier doubts in his life, his faith had grown stronger in part because of his own struggles.

“I’m going to live again,” he said, according to the AJC.