Strong storms snapped off trees and damaged homes Monday as forecasters issued a series of tornado warnings in several southern states. About 1 million people live in an area of northeastern Louisiana and southwestern Mississippi that had a moderate chance of dangerous weather, forecasters said.A tornado watch was issued from east Texas through Louisiana into central Mississippi and southern Arkansas. A tornado emergency was declared in Alexandria, Louisiana.One storm-related death has been reported in Vernon Parish, Louisiana. The person was inside a home, according to the Vernon Parish Sheriff’s Department.Two homes were destroyed in the Evergreen Community of Webster Parish, CBS affiliate KSLA-TV reported. The National Weather Service said the threat of severe weather would continue all day as a cold front mixed with warmer air.Storm damage from a possible tornado 12 miles north of Minden in the Evergreen community in Webster Parish. pic.twitter.com/lm4i4zFDgV— Jeff Castle KSLA (@jeffcastleksla) December 16, 2019A lesser threat extended into Alabama, western Georgia, the western Florida Panhandle and Tennessee as storms moved eastward, forecasters said.Several school systems in Alabama and Mississippi announced plans to dismiss students early and canceled afternoon events and activities as a precaution since storms could be moving through around usual dismissal times.Forecasters said tornadoes, hail and winds blowing at 70 mph posed the greatest threat as a cold front moved across the region in an easterly direction.

The teenage climate activist Greta Thunberg clapped back at a German rail operator after it appeared to accuse her of staging a picture in which she was seen sitting on the floor of what she called an „overcrowded” train.Thunberg posted the picture on Twitter on Saturday, in which she could be seen sitting on the floor of the train and appeared to be wistfully staring out of the window surrounded by luggage.The caption on the tweet said: „Traveling on overcrowded trains through Germany.”

Greta Thunberg@GretaThunberg Traveling on overcrowded trains through Germany. And I’m finally on my way home! 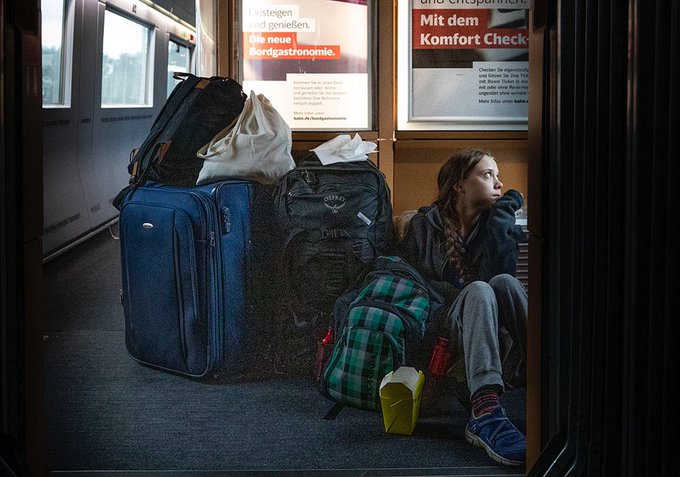 11:53 PM – Dec 14, 2019The German rail operator Deutsche Bahn responded to Thunberg noting that she had not praised its „friendly” and „competent” team and appearing to suggest that the photograph was staged by mentioning Thunberg had a first-class seat on the train.Thunberg clapped back against Deutsche Bahn in her usual no-nonsense manner by relating her version of the story behind the picture.”Our train from Basel was taken out of traffic,” she said in a tweet. „So we sat on the floor on 2 different trains. After Göttingen I got a seat.”She also made it clear that her comment on the train being „overcrowded” was not a criticism against the operator.”Overcrowded trains is a great sign because it means the demand for train travel is high!” she said.Thunberg was traveling home from Madrid after attending the UN climate conference — a journey she made to and from her home in Sweden on public transport to avoid environmentally costly plane travel.During the conference she was also criticized for saying politicians should be put „against the wall” to pass progressive environmental policies, a term some accused of insinuating violence.Thunberg said the phrase was a literal translation from Swedish that means to put someone on the spot with tough questions, and she apologized for any misunderstanding.The young activist is no stranger to high-profile Twitter spats, having last week incurred the wrath of US President Donald Trump, who said the decision to make her Time’s Person of the Year was „ridiculous” and told Thunberg to „chill.”