A swath of the Pacific Ocean more than twice the size of California is heating up, and fast.About 500 miles east of New Zealand’s South Island, near the Chatham Islands, ocean temperatures have spiked to almost 10 degrees Fahrenheit (6 degrees Celsius) warmer than average.Normally, surface temperatures in that part of the Pacific hover around 59 degrees Fahrenheit (15 degrees Celsius), but they’re 68 degrees Fahrenheit (20 degrees Celsius), according to James Renwick, a scientist at Victoria University in Wellington, New Zealand.”It’s the biggest patch of above-average warming on the planet right now,” Renwick told The Guardian.  In satellite images, this 386,000-square-mile (1,000,000-square-kilometer) patch looks like a menacing red blob.

NOAA Coral Reef Watch „Sea temperatures don’t actually vary too much, and a degree, plus or minus, is quite a big deal, and this area is probably 4 degrees [Celsius] or more than that above average and that’s pretty huge,” Renwick told The New Zealand Herald.He added: „I don’t have an explanation for it.”

Related: You Can Thank Climate Change For Worsened Seasonal Allergies

0:03
4:55
If you’re experiencing worse seasonal allergies than ever before, you can thank climate change 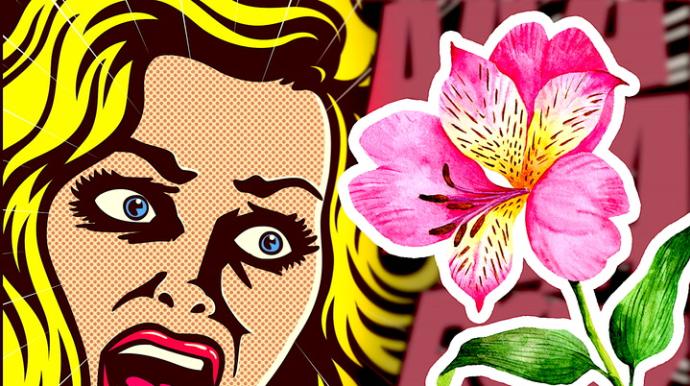 Where marine heat waves come from

Since 1981, water temperatures off the New Zealand coast have increased by between 0.18 and 0.36 degrees Fahrenheit (0.1 and 0.2 degrees Celsius) on average per decade.But when sea-surface temperatures spike precipitously, it’s considered a marine heat wave. These typically occur when weather causes the ocean to absorb more heat than usual or if certain conditions prevent the ocean from releasing heat.In the case of New Zealand’s current hot spot, Renwick told The Guardian that the culprit could be an anti-cyclone that has settled above the region. Anti-cyclones are high-pressure weather systems in which the atmosphere and surrounding air become heavy, stifling nearby winds and causing calm, stagnant conditions.

„It’s probably a very thin layer of ocean that has warmed up, and there hasn’t been any wind to cool it for several weeks,” Renwick said.

Climate change can make these marine heat waves worse because the ocean absorbs 93% of the extra heat greenhouse gases trap on Earth. So as global warming gets worse, heat waves on land and in the ocean grow more intense.

„In a warming world, these events are going to become worse, and we are going to head toward a state where it is like a permanent marine heat wave,” Hillary Scannell, an oceanographer at the University of Washington, told The Washington Post in September.

Return of ‘The Blob’?

In 2014, a marine heat wave plagued the Pacific Ocean between Hawaii, Alaska, and California. It led seal and sea-bird populations to die off, algal blooms to spread, and coral to bleach. Scientists nicknamed it „The Blob.”

Other underwater ecosystems are also put at risk as waters warm. Higher sea temperatures make it difficult for bigger, more nutritious species of cold-water zooplankton — which feed fish and other predators — to thrive. Fish and sharks abandon their traditional habitats in search of cooler waters; in 2018, a type of rare grouper fish from Queensland, Australia, was spotted almost 2,000 miles away in northern New Zealand.

Luiz Rocha, California Academy of SciencesA 2019 study showed that hotter temperatures from a Pacific heat wave caused the local extinction of a species of bull kelp in New Zealand waters, which then allowed an invasive species of seaweed to take over.Spiking ocean temperatures could also prompt an increase in algal blooms that poison seafood. In 2015, during the first „Blob,” an enormous bloom spanned the US’s West Coast, contaminating local shellfish. The governments of Oregon, California, and Washington shut down the commercial harvest of Dungeness crab for months to protect people from contaminated seafood.Read the original article on Business Insider 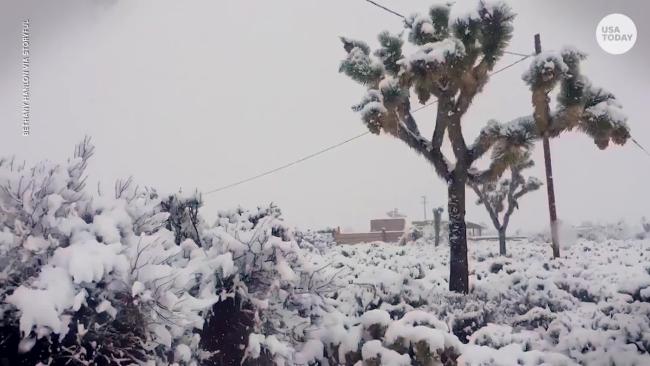 Scroll back up to restore default view.A major winter storm barreling out of Southern California threatened to deliver heavy snow, gusty winds and near-blizzard conditions for the weekend from the South Central Rockies to the Upper Midwest as many holiday travelers head home.”Those with travel plans in this area should monitor the forecast and consider changing your plans,” the National Weather Service warned on Twitter. The NWS said the storm could bring up to 18 inches of snow from northern Nebraska to northwest Minnesota, where it could dump up to 20 inches.

The weather service said strong winds and heavy snowfall are expected to create near-blizzard conditions, reducing visibility as travelers take to the roads.

„Travel conditions as a result will become difficult to impossible,” the NWS said.

Areas to the southeast of the band of heavy snow, including parts of eastern Nebraska and northern Wisconsin, are expected to get hit with periods of sleet and freezing rain, with up to a quarter-inch of ice in some areas.

As the storm made its trek to the northeast out of the Four Corners area of the Southwest, the weather service issued a winter storm warning for parts of Wyoming and Nebraska through Saturday, predicting up to a foot of snow from northern Nebraska to southeast North Dakota.

A major Winter Storm will impact portions of the Central/Northern Plains and the Upper Midwest during one of the busiest travel weekends of the year. Those with travel plans in this area should monitor the forecast and consider changing your plans. http://weather.gov 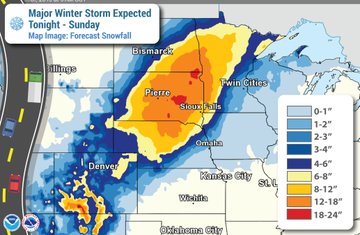 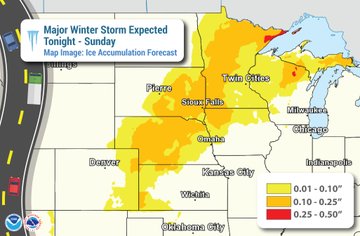 58 people are talking about this

So far at least one person, a 60-year-old woman, died from the winter storm after the car she was riding in veered off a snowy road in San Diego County, California, and crashed into an embankment.

The snow shut down vital Interstate 5 in Tejon Pass through the mountains north of Los Angeles and stopped traffic on Interstate 15 over Cajon Pass in the inland region to the east.

I-15 reopened in both directions in the afternoon, but authorities later shut down about 45 miles of the freeway from Baker, California, to Primm, Nevada, on the way to Las Vegas because of snow and ice.

Motorist Johnny Lim, who was stuck Thursday for five hours in Cajon Pass, wasn’t sure he could reach Las Vegas, where he hoped to spend time after Christmas. He worried about driving his car through the pass when it reopens.

“The freeway is full of snow and ice,” he said, adding that his car “is not built for conditions like this.”

The storm, which pushed through the Four Corners area toward the northeast, also dumped a foot of snow on Flagstaff, Arizona.

The NWS forecast heavy snow for the Central Rockies and a corridor of freezing rain and sleet as far as northern Wisconsin.

Snow could create post-holiday travel headaches along portions of Interstates 76, 80 and 90 in Colorado, Nebraska and South Dakota overnight Friday.

By Saturday, the storm likely will hit parts of northern Michigan, Minnesota, northern Wisconsin and northern Iowa with freezing rain or snow, The Weather Channel reported.

As it heads east, the storm is expected to spread snow and freezing rain from the Northern Plains to northern New England.

Climate change: Were the predictions we made 20 years ago accurate? Here’s a look

Forecasters expected heavy snow across a northern strip of New York and New England, with mostly rain expected along the I-95 corridor from Boston to Washington, D.C.

How Would You Scrub Radiation from Space After a Nuclear Attack? by Popular Mechanics•December 27, 2019

The AAAS’s Science magazine reports that scientists are studying natural ways to remove radiation in order to create artificial versions. Their goal is to make sure humankind has a way to clear interfering nuclear radiation out of space in order to restore communications and more following hypothetical use of a nuclear weapon.Science relates the cautionary tale of a nuclear test in space, named Starfish Prime (shown above), which knocked out orbiting satellites all over the world because of the trapped radiation that resulted from the test blast. The reason scientists are worried now, Science reports, is that we have a novel nuclear power on the horizon: North Korea, whose self-imposed and almost medieval isolation means they’re one of the few nations on Earth without any orbiting satellites.They’re definitely the only aspiring nuclear power without satellites. In a way, North Korea could use a nuclear blast in space as a real-life version of the electromagnetic pulse (EMP) attacks employed in Ocean’s 11 and mostly relegated to fiction. The country could knock out the communications that the rest of the world relies on and exploit that blackout to make further attacks. Without satellite coverage, we couldn’t even meaningfully understand the weather.The silver lining is that nature already shows us ways to scrub radiation out of our atmosphere, partly because nature already blasts our atmosphere with radiation, both as a matter of routine space events and with phenomenal flukes like an 1859 solar flare that knocked out telegraph service.

People as far south as Cuba and as far north as Santiago, Chile could see their respective polar lights as solar radiation bombarded the atmosphere.

In 2012, scientists observed a real-life radiation scrub in progress as the Van Allen Probes circled Earth to explore its radiation belts and magnetosphere.Science calls this “natural remediation processes, showing how radio waves resonate with high-energy electrons, scattering them down the magnetic field lines and sweeping them out of the belts.” After studying these natural mechanisms, scientists devised ways to imitate them.The Van Allen Probes are retired, but a subsequent instrument, the DSX dipole antenna, will explore the radiation belts and beam very low frequency (VLF) radio waves into them to see what happens. Our VLF infrastructure is already expansive because the waves are used to communicate with submarines.A second proposed idea is to launch and use an orbiting small particle accelerator to create VLF waves, and a third is to trigger a kind of atmospheric immune system reaction by seeding the atmosphere with barium, which will attract charged ions and form a plasma blast to emit VLF waves. All are operating toward the same mechanical goal; they’re just experimenting with the best ways to accomplish that goal and remove radiation efficiently.Science explains that there’s a second application for this technology that’s less important in the sense of immediate safety but arguably just as important in the long term: Intrusive radiation in space is one of the biggest obstacles standing in the way of interplanetary human travel, and NASA has been exploring ways to shield spacecraft as they travel through these belts of extreme radiation. If a spacecraft could carry a repulsive antenna beaming out VLFs, this could work like the device that repels deer from around your vehicle, generating a radiation-free envelope for the craft to travel through.