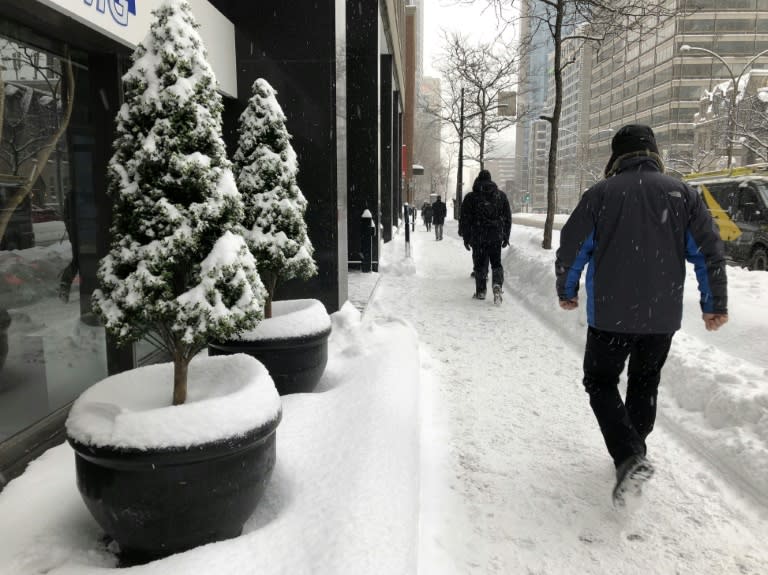 People walk on the Rene-Levesque Boulevard in downtown Montreal in February 2019 (AFP Photo/Eric THOMAS)Montreal (AFP) – A winter storm in eastern Canada led to the cancellation of nearly 200 flights on Monday, and came too late for a White Christmas.The mix of snow and freezing rain disrupted both departures and arrivals at airports in Montreal, the capital Ottawa, and the country’s largest city Toronto, an AFP count showed.Worst-affected was Montreal-Trudeau International Airport with more than 100 cancellations, mostly to Ontario and the northeast United States, an airport spokesperson told AFP.Snow accumulations of 15-20 centimeters (six to eight inches) were expected by Tuesday evening in southern Quebec, according to the federal environment ministry.  The storm came after Montreal had a snowless Christmas, something that happens about once every five years, the ministry said. Only 13 centimeters (five inches) of snow had fallen in December, compared with an average of 49 centimeters for that month.Neighboring parts of the United States in the northeast and New England regions have also experienced heavy snow and rain or freezing rain. Moisture from that system was surging northward, the US National Weather Service said.

The brushfires in Australia are growing and have become so massive and powerful that they’re creating their own dangerous weather phenomenon. It happens through the formation of „pyrocumulonimbus” clouds — what NASA calls „the fire-breathing dragon of clouds.” These fire-induced storms bring little rain but are packed with lightning that can spark new fires. A weather alert on Monday forecast the thunderstorms over the southern Australian province of Victoria.

„Pyro-cumulonimbus clouds have developed to altitudes over 16km in East #Gippsland this afternoon. These fire-induced storms can spread fires through lightning, lofting of embers and generation of severe wind outflows #VicWeather #VicFires” the Bureau of Meteorology in Victoria tweeted.

Pyro-cumulonimbus clouds have developed to altitudes over 16km in East #Gippsland this afternoon. These fire-induced storms can spread fires through lightning, lofting of embers and generation of severe wind outflows #VicWeather #VicFires pic.twitter.com/gZN6sC7meU

According to the BBC, about 30,000 residents and tourists were urged to flee East Gippsland until evacuations were deemed too risky when fires reached major roads. Fires caused by pyrocumulonimbus storms were also recorded in New South Wales, the province where Sydney is located.

Australia has been battling scorching temperatures and out-of-control brushfires throughout the country, both conditions that increase the risk for pyrocumulonimbus clouds — also known as „fire clouds” or flammagenitus.

CBS News meteorologist Jeff Berardelli explained the weather phenomenon could be on the rise as the globe wrestles with climate change.

What are pyrocumulonimbus thunderstorms?

Pyrocumulonimbus are very similar to typical thunderstorms, with a „couple of key differences,” according to Berardelli. Both are created through rapidly rising air caused by heating of the air column.

„In the case of pyrocumulonimbus, the fire itself heats the air so intensely it fuels rapidly rising motion above the fire, like the updrafts in thunderstorms, which can reach speeds over 100 miles per hour,” Berardeli said. „That propels smoke and ash several miles into the atmosphere where the air cools and the available water vapor condenses into visible clouds.”

The ash then helps condense the water vapor into droplets by acting as condensation nuclei — dust for the moisture to cling onto. Berardelli said the more intense the fires, the more intense the updrafts and the greater potential for these clouds to grow upward vertically to miles high.

„The faster this process takes place the more likely the clouds are to spark lightning, just like real thunderstorms,” Berardelli said. „But the difference is that unlike real thunderstorms, the rain that falls is evaporated by the heat and dryness of the fire before it can reach the ground. This is a dangerous side effect, because pyrocumulonimbus do not produce rain to help put out fires but they do spark lightning which can ignite new fires.”

Australia has been ravaged by fires since September. About 12.35 million acres have burned nationwide, Ten people, including a volunteer firefighter, have died and more than 1,000 homes have been destroyed.

Cailey Rizzo
Travel+LeisureDecember 30, 2019Visit Dozens of National Parks for $80 With the America the Beautiful PassA Christmas miracle fell upon Joshua Tree National Park last week: the dry landscape was covered in a layer of rare white snow as a storm passed through California.On December 26, a blanket of white temporarily covered Joshua Tree. Temperatures regularly fall below freezing in the desert so typically, Joshua Tree only receives about 5.5 inches of precipitation per year. But this time, it came during the most wonderful time of the year.

Last week’s storm brought precipitation and combined with the winter temperatures so those who trekked through Joshua Tree after Christmas were treated to a rare sight. 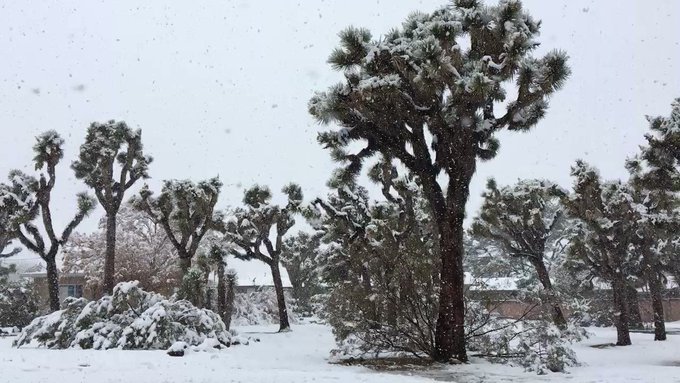 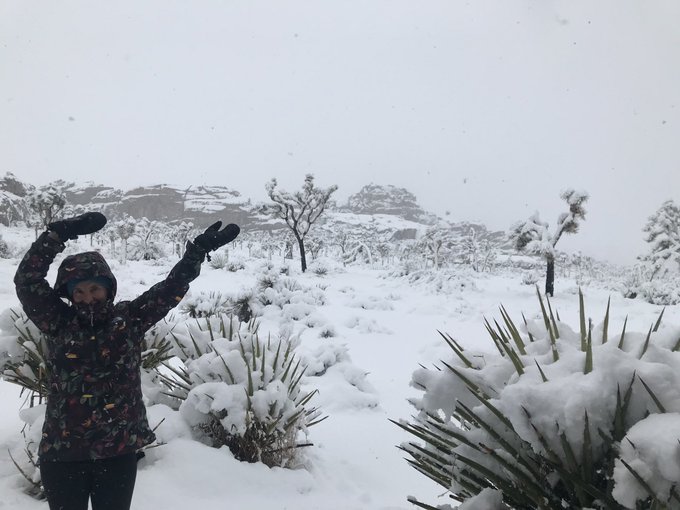 My friend who took this says rangers haven’t seen this much snow in the park since 2010. Major impacts are expected in the Central U.S. from this storm. More on @WeatherNation 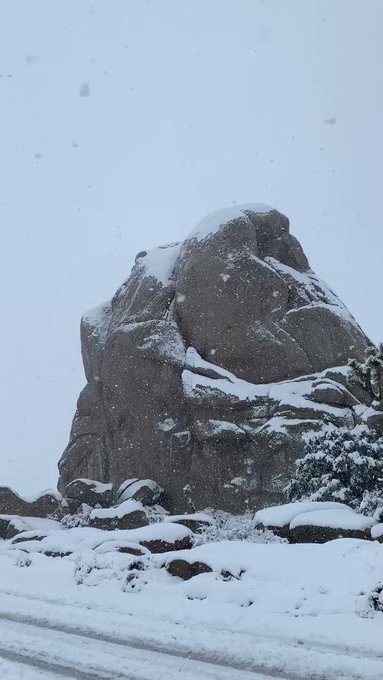 Joshua Tree wasn’t the only national park to have a rare snowfall last week. Arches National Park closed over the weekend due to snow and ice accumulation, however snow-lovers still got their fun in. The park’s Twitter account kept visitors posted on its closing times.

Good morning @SLESeahawks from Arches National Park! My mom and I spent the day yesterday hiking to different arches through the snow. It was beautiful! 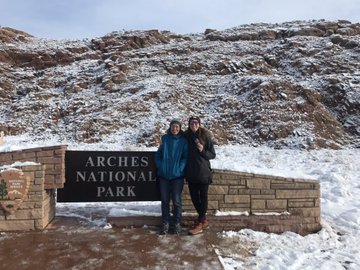 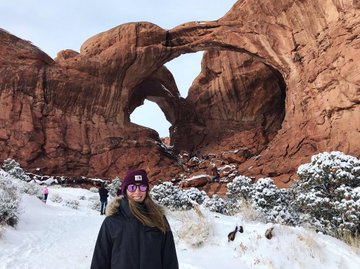 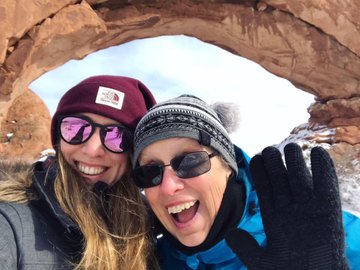 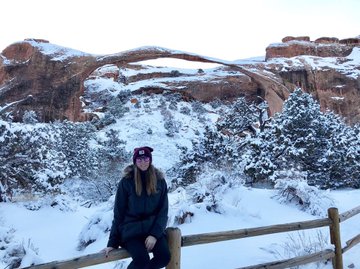 And 25 miles of State Route 64 in Grand Canyon National Park were closed due to snowfall.

Below-normal temperatures are expected in the area for the next few days, although temperatures could return to normal by the end of the week. According to the National Weather Service, precipitation has slowed down.

A sprawling winter storm continued to deliver snow, ice and wind to portions of the Midwest and Northeast on Monday, wreaking havoc with holiday travelers from the Dakotas to Maine.

Strong wind gusts, blowing, drifting snow and icy conditions might make travel „difficult or impossible” in many areas, the Weather Channel said. In all, almost 20 million people were under winter storm advisories as of midafternoon Monday.

Howling winds that gusted to 60 mph knocked out power to over 100,000 customers in Ohio on Monday morning, according to poweroutage.us.

Heavy snow was the story in the Upper Midwest, where northern portions of Minnesota, Wisconsin and Michigan were expecting up to another foot of snow on Monday.

The fierce storm had already closed interstates and caused hundreds of crashes over the weekend in the north-central U.S., where conditions were especially bad in the Dakotas, Nebraska and Minnesota.

In the Northeast, a mixture of snow, sleet and freezing rain has developed from eastern upstate New York to parts of western, central and northern New England, the Weather Channel said.

A half-inch of ice or more is possible in some of the higher terrains of eastern New York, Vermont and western Massachusetts, where ice storm and winter storm warnings are currently in effect, the National Weather Service said. „Heavy snow is also expected across portions of Upstate New York to northern New England with accumulations of 6 to 8 plus inches possible,” the weather service predicted.

· 17h
Replying to @brianhhawthorne and 2 others

Hey Brain great info, by chance do you have time to tweet a photo of the ice accretion?

Close up of ice accretion in Plainfield, Mass. Starting to hear tree limbs breaking in the woods.

50 people are talking about this

Midwestern hubs were also bracing for wintry weather: „Following all rain so far with this storm, cities like Chicago and Detroit will have a wave of snow move through Monday night into Tuesday,” AccuWeather meteorologist Courtney Travis said. A coating to an inch or two of snow can whiten both of these cities.

Portions of the western U.S. will also see foul weather by Tuesday. The weather service said that a storm system moving toward the Pacific Northwest will bring widespread rain and mountain snows to much of the Northwest beginning Tuesday and lasting into the New Year.

Heavy snowfall, in excess of a foot, is possible in the highest terrain of the Washington Cascades and the northern Rockies.

Moscow authorities usually spend the winter clearing the streets of snow. But this year, they’re shipping it in.

Last week, Moscow citizens started taking to social media after they saw dump trucks bring artificial snow into the city, which is setting up for New Year’s Eve celebrations.

Moscow is typically blanketed in snow this time of year, but unusually warm weather has left the city snow-less.

This December has been the warmest since 1886, and this year has been the hottest since officials started recording weather, the country’s weather chief said Monday.

Officials explained that the snow set up on Tverskaya, one of the city’s main avenues, is for a snowboarding demonstration to take place on New Year’s Day, The Guardian reported. The snow was created using ice from a nearby rink.

But fake snow dumps were also noted at other sites in the city center, including the Red Square.

„Winters used to be a lot harder here,” he said. „You’d expect a few days with really strong frost and there would almost always be snow by the new year. It has been getting warmer, definitely. That’s why, as you can see, we have this funny snow over here this year.”

Russian President Vladimir Putin acknowledged that global warming is threatening the Russian way of life during his annual news conference on December 19.

„We have whole towns inside the Arctic Circle built on permafrost. If that starts to melt, can you imagine what the consequences could be for us? Very serious,” Putin said, according to the BBC.

But he remains skeptical that humans are the cause of climate change, and pushed a debunked idea that a change in the Earth’s axis could be to blame.

Scientists are in agreement that global temperatures are rising, and humans polluting and emitting carbon are to blame.