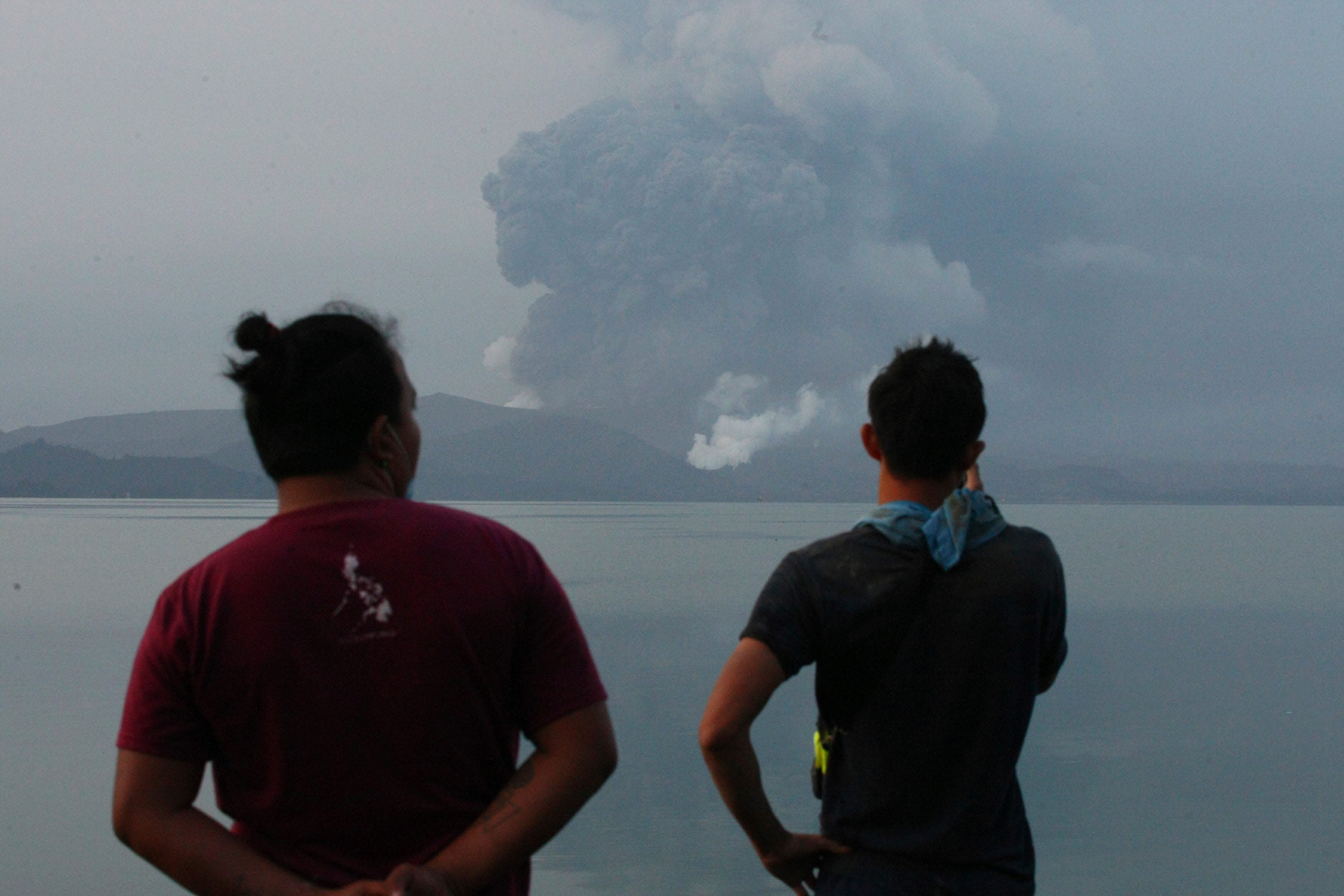 30,000 flee rumbling Taal volcano as Philippines warns of possible ‘hazardous’ eruptionLava, ash, thunder and lightning spewed from the Taal Volcano in Philippines on Monday as thousands of residents fled the region along roads choked by cars and ominous darkness.The Philippine Institute of Volcanology and Seismology warned that a „hazardous explosive eruption” was possible within hours to days.President Rodrigo Duterte ordered families in nearby communities to evacuate to safer ground, a process made difficult by the poor visibility and, for many, a lack of transportation. Hundreds of thousands of people may ultimately flee the region, officials said.”Taal Volcano entered a period of intense unrest,” the volcano institute said in a statement. „This magmatic eruption is characterized by weak lava fountaining accompanied by thunder and flashes of lightning.”Philippine Defense Secretary Delfin Lorenzana warned that the „worst-case scenario” for Taal could be similar to the eruption of Mount Pinatubo, 90 miles to the north, that killed 800 people and rendered 200,000 homeless in 1991.”Remember Pinatubo – the entire mountain collapsed during the eruption,” Lorenzano said. „That’s what we are fearing, that the eruption would cause the entire island to rise and scatter debris on the nearby areas.”Taal started acting up Sunday, spewing enough ash, steam and even smaller rocks nearly 10 miles into the air. The debris forced the airport in Manila, 65 miles away, to shut down for several hours. More than 500 flights were canceled, and authorities warned that the airport could again be closed if conditions worsen.”We can never predict the actions of this volcano,” Lorenzana said.‘We need help”: Passengers stranded on Guam due to volcano ‘Our people are panicking’: Taal Volcano in Philippines gushes lava Tracy Gregg, an associate professor of geology at University at Buffalo, agreed with the Philippine government’s assessment. She said that nearby Lake Taal is actually a volcanic crater formed from at least four „cataclysmic” eruptions more than 500,000 years ago.Taal Island, essentially the volcano, was formed from subsequent, smaller eruptions.”The truth is that we have no good precedent for how such a large volcano gears up into a cataclysmic eruption,” Gregg told USA TODAY. „We know that such eruptions occur … but  we don’t know what specific advance signs such a gigantic eruption would give us because we’ve never witnessed one.”She said that could be what Taal is revving up for. But she said it also could simply be venting some extra pressure – „like a pot will boil over on the stove.”Taal is among two dozen active volcanoes in the Philippines. The country is part of the Pacific “Ring of Fire,” a seismically active region prone to earthquakes and volcanic eruptions.At least 30,000 people had fled homes in Batangas and Cavite province by Monday, the nation’s disaster response team said. More than 15,000 people had fled to emergency shelters Monday, the Philippine News Service reported.Irene de Claro, a mother of four, worried about her father, who stayed in their village in Agoncillo town in Batangas while the rest of the family fled in panic.“My father is missing. We don’t know too what happened to our house because the ash was up to our knees,” she said. „It was very dark and the ground was constantly shaking when we left.“Most likely there’s nothing for us to return to. We’re back to zero.”In the town of Balete, Mayor Wilson Maralit said some panicked residents were more interested in saving the livestock that provides their livelihood as they were in saving themselves.“We’re trying to stop them from returning,” he told DZMM radio. „Ad warning that the volcano can explode again any time and hit them.”Contributing: The Associated Press White Island volcano: Death toll rises to 19 in New ZealandThis article originally appeared on USA TODAY: Taal volcano: 30,000 flee lava, ash in Philippines

CHESLIE ANDAL via REUTERS Tens of thousands of people have fled their homes after lava spewed from a volcano near the Philippine capital of Manila, amid fears a bigger eruption could be imminent.Schools and businesses across the capital were shut on Monday as clouds of ash from the Taal volcano drifted over the city.Seismologists warned an eruption could happen at any time and could potentially send a tsunami surging across Taal Lake, which surrounds the crater.No deaths were reported, but a truck skidded out of control on an ash-blanketed road, killing the driver and injuring three people in Laguna province. Police said the accident may have been linked to slippery conditions.More than 30,000 villagers have been evacuated from their homes in the ash-blanketed province of Batangas and nearby Cavite province and officials expect the numbers to rise.“The speed of escalation of Taal’s volcanic activity caught us by surprise,” Maria Antonia Bornas, chief science research specialist at the Philippine Institute of Volcanology and Seismology, said.“We have detected magma. It’s still deep, it hasn’t reached the surface. We still can expect a hazardous eruption any time.”Some residents could not flee their villages because of a lack of transportation and poor visibility, which others refused to leave their homes and farms.“We have a problem – our people are panicking due to the volcano because they want to save their livelihood, their pigs and herds of cows,” Mayor Wilson Maralit of the town of Balete told DZMM radio. “We’re trying to stop them from returning and warning that the volcano can explode again any time and hit them.”Mr Maralit, whose town lies along the shoreline of Taal Lake, which surrounds the erupting volcano, appealed for troops and more police to stop people from sneaking back to their villages.Clouds of ash forced the shutdown of the country’s main airport in Manila on Sunday, with more than 500 flights cancelled. The airport partially reopened on Monday.A plane carrying Rodrigo Duterte, the Philippines’ president, was later able to land in Manila from his hometown of Davao, his spokesman said, adding he saw the extent of the disaster from the plane.Volcano Taal sprang back to life on Sunday, blasting steam, ash and pebbles 10 to 15km into the sky, according to the Philippine Institute of Volcanology and Seismology.On Monday, the ash and steam column reached a height of 2km, with red-hot lava columns reaching less than half of that height.Frequent tremors and a buildup of pressure of the 1,020ft volcano however, indicated a major and much more dangerous eruption could still happen, said Renato Solidum, who heads the institute.The government volcano monitoring agency raised the danger level around Taal three notches on Sunday to Level 4, indicating a hazardous eruption within hours to days was possible. Level 5, the highest, means such an eruption is underway.The volcano’s last disastrous eruption happened in 1965, when more than 200 people were killed.Taal, one of the world’s smallest volcanoes, is regarded as one of the most active volcanoes in the Philippines, which sits along the Pacific “Ring of Fire,” a region prone to earthquakes and volcanic eruptions. Additional reporting by agencies