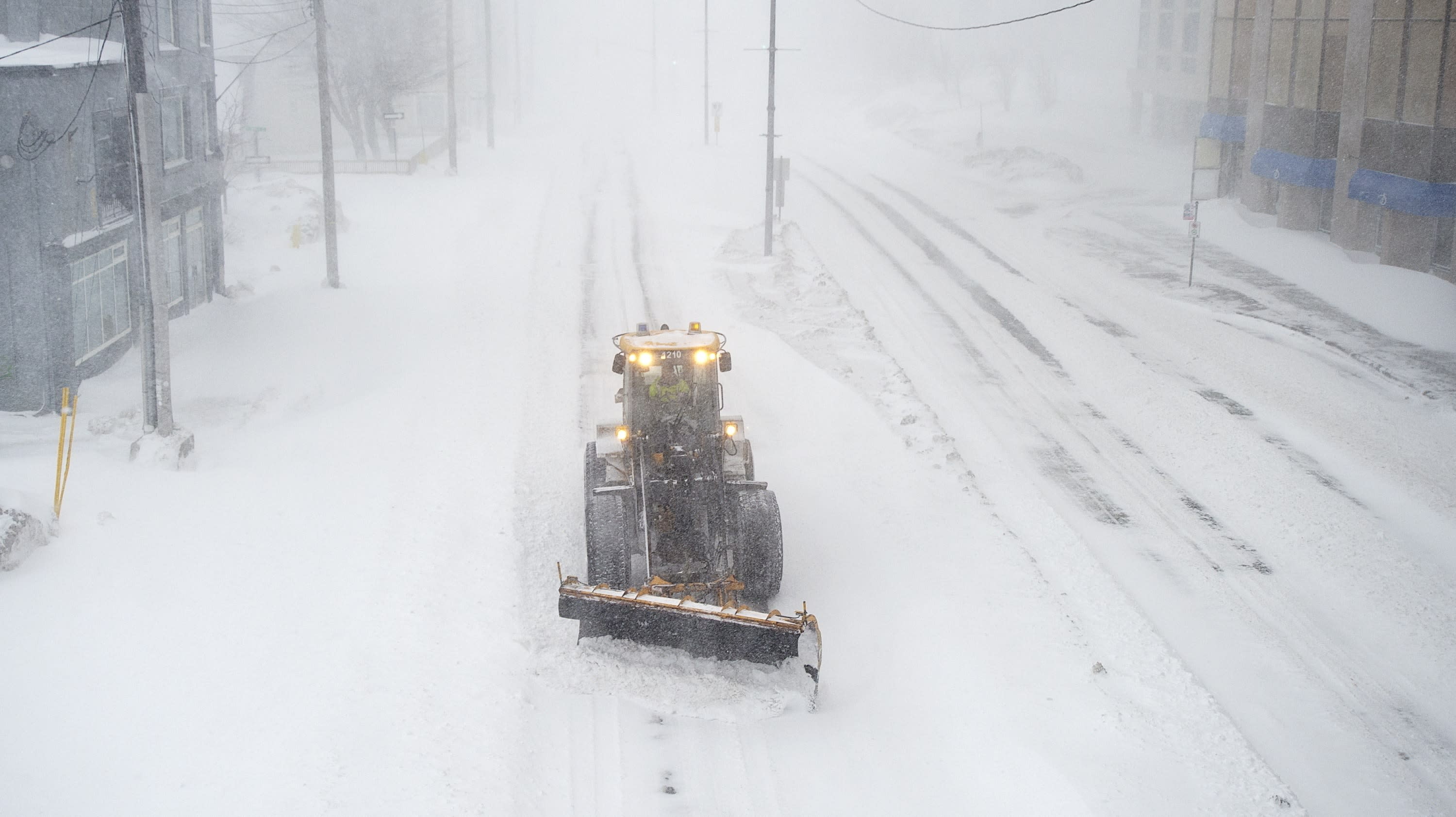 Blizzard prompts state of emergency in Newfoundland capital The capital of the Canadian province of Newfoundland and Labrador has declared a rare state of emergency as blizzard conditions descended on the city.Officials in St John’s ordered businesses closed and vehicles off the roads.The nearby towns of Mount Pearl, Paradise, Torbay and Portugal Cove-St Philip’s followed suit shortly afterwards.Environment Canada issued blizzard and wind warnings for much of Newfoundland and said strong winds and blowing snow might cause whiteout conditions until Saturday in some places.

Justin Trudeau@JustinTrudeauTo everyone in NL affected by the storm, please listen to your local authorities. We want you to stay safe, and keep the roads clear for emergency vehicles & snow clearing. @BillBlair is in contact with the province & is monitoring the situation. We’re ready to help if needed.8:36 PM – Jan 17, 2020Prime Minister Justin Trudeau said Canada’s public safety minister was in touch with provincial authorities and monitoring the storm. “We’re ready to help if needed.” he said on Twitter.Local taxi company Jiffy Cabs said in a tweet that it was pulling vehicles off the roads for the “first time in our company history”.St John’s officials urged people to prepare emergency kits with enough supplies to last for at least 72 hours.Residents were warned to expect 40-75 centimetres of snow. At midday, 33 centimetres had been recorded at St John’s International Airport since 5am, said Environment Canada meteorologist David Neil.“It’s been very nasty in St John’s so far and it’s expected to just continue,” Mr Neil said from Gander, Newfoundland.The Royal Newfoundland Constabulary said its officers were on call and available to respond to emergencies in St John’s.A spokesman advised people to stay off the roads if possible and prepare for power outages, keeping flashlights, food and water on hand.“This is an unprecedented kind of event. This is easily on pace for a record snowfall,” Constable James Cadigan said. 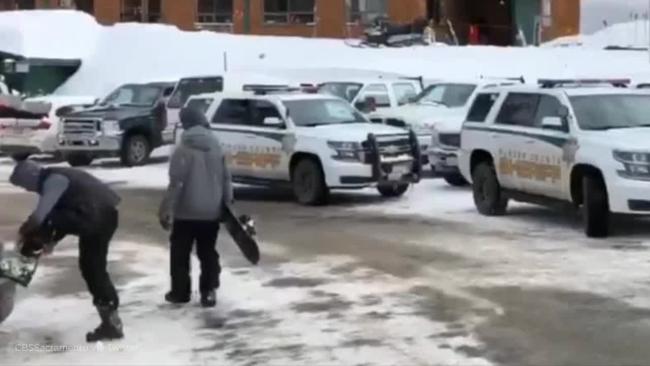 Officials: 1 dead, 1 seriously injured in Lake Tahoe avalanche   At least one person has died and another was seriously injured Friday in an avalanche at a Northern California ski resort and search crews were scouring the resort for other potential victims, authorities said.TAHOE CITY, Calif. (AP) — A man killed in an avalanche at a Lake Tahoe ski resort on Friday was remembered as an avid skier familiar with the picturesque mountains along the northern California and Nevada border.Cole Comstock, 34, of Blairsden, California, was caught in the avalanche that seriously injured another skier on some of the steepest terrain at Alpine Meadows Ski Resort, where a series of expert runs snake through trees, past cliffs and down narrow chutes. The avalanche occurred the morning after a storm dumped 11 to 22 inches (0.28 to 0.56 meters) of snow.“You have to be pretty skilled to get over there in the first place,” said Sean Kent of Reno, who was at Alpine Meadows Friday and has skied the affected area before. “It’s fickle. It comes with the territory. There’s only so much you can do.”Comstock’s family said in a statement to the Sacramento Bee that he had been skiing for 11 years and grew up in the nearby town of Quincy, California.”He deeply loved his friends, his family, and, above all, his wife,” their statement read. “He supported everyone with all of his heart and was a true example of unconditional love.”Placer County Sheriff’s Sgt. Michael Powers said the injured skier had serious lower body injuries and was airlifted to a Lake Tahoe hospital for emergency surgery.Powers said a ski patrol was on scene in the rugged area almost immediately, where others at the top of the run said two skiers had been on the hill below them in an area within the ski resort’s boundary.“I know at least one of the victims was partially buried by snow,” Powers said. “When you get conditions like this, there is always a risk of avalanche.”The Sierra Avalanche Center had warned of dangerous avalanche conditions for all elevations following the storm. Its website said there was “a high degree of uncertainty in regards to snowpack instability near and below treeline.”Search and rescue crews scoured the rest of the mountain with dogs after the avalanche. Authorities did not believe there were any more victims.Snowboarder Rex Mulvaney of Reno said he noticed some areas had been roped off and people were heading back down the mountain.“I knew right away something was wrong,” he said. “They don’t usually close something as soon as they open it, like five minutes later.”The cause of the avalanche was under investigation. The resort said avalanche-prevention work had been performed in the area before it was opened to skiers for the day.The tragedy came at the start of a busy holiday weekend where hundreds of people flock to ski resorts surrounding Lake Tahoe, oftentimes enduring hours-long traffic backup and treacherous road conditions to reach the region’s snow-covered slopes.An avalanche at Alpine Meadows in March 1982 killed seven people, including several employees of the ski resort. It struck several buildings, including the main lodge and two chairlifts, and buried the resort’s parking lot. One woman was discovered after five days, buried in the remains of the ski chalet.Alpine Meadows, about 7 miles (11 kilometers) from Tahoe City, is next to Squaw Valley, home of the 1960 winter Olympics. The two resorts are co-owned by Alterra Mountain Co. and operated as Squaw Valley Alpine Meadows.On its website, Alpine Meadows touts itself as a „picturesque playground for families and off-the-radar thrill-seekers.” The property has more than 100 trails across 2,400 acres (971 hectares), groomed runs and chalet-style lodges._Associated Press writers Daisy Nguyen in San Francisco and Cheyanne Mumphrey in Phoenix contributed to this report._This story has been corrected to show that Cole Comstock is the deceased victimNearly 100 million under winter weather alerts as sprawling storm picks up across US

USA TODAY•January 17, 2020Winter storm that started in northwest U.S. moving through the midwest to east coast Nearly 100 million Americans were under a winter weather alert Friday as a sprawling storm is expected to create hazardous travel conditions from the Plains into northeastern U.S. through the weekend, forecasters warn.Already Friday, a plane slid off a taxiway at Kansas City International Airport due to icy conditions that also forced the closure of schools, universities and government offices in many areas. Delta Airlines A319 was taxiing from the terminal Friday morning when the nose wheel dropped off the taxiway pavement. Officials said there are no known injuries on that flight.Forecasters posted a blizzard warning for parts of the Upper Midwest as the storm began to gather steam. In South Dakota and Minnesota, dozens of schools canceled classes Friday ahead of snowfall expected during the day.

In Kansas, Gov. Laura Kelly closed state offices in the Topeka area, urging people to “stay safe and warm, exercise caution and allow road crews to do their job.”

The combination of snow and high winds will cause whiteout conditions and substantial drifting, AccuWeather said. Travel will be „difficult to impossible,” the weather service office in Sioux Falls, South Dakota, warned.

#Blizzard warnings posted in the Northern Plains as a mess of #snow and #ice will expand across the Midwest into the Northeast through Saturday. 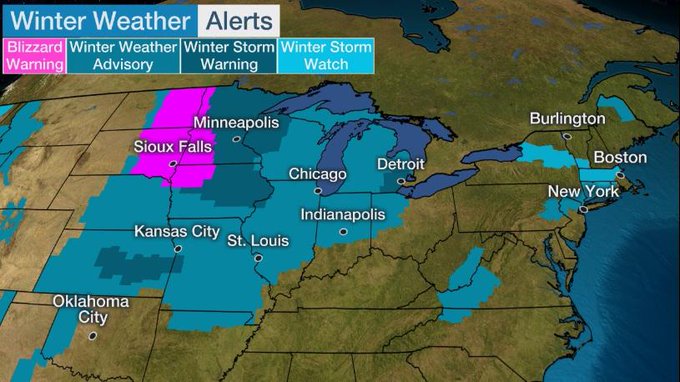 49 people are talking about this

Some of the heaviest snow will fall Friday and Friday night in the Dakotas, Minnesota, Wisconsin and Michigan, AccuWeather said, possibly piling up to a foot in some areas.