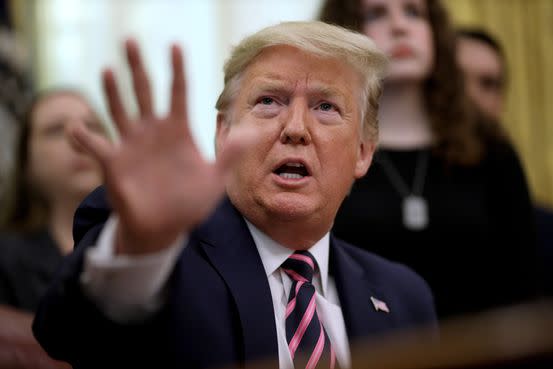 Trump Wants Quick Curtain on Impeachment Drama President Trump for weeks used the impeachment process to raise money and energize the base. Now that the Senate has opened its trial, Mr. Trump wants it over with, fast.By  Gerald F. Seib Jan. 18, 2020 12:01 am ETFor weeks, President Trump and his campaign have heaped scorn on the impeachment process, while using it to raise a lot of money and energize the president’s base.Now that the Senate has formally opened its trial phase of the process, the president’s approach has shifted. His message: Let’s get this over with, fast.In both his public remarks and private comments, advisers say, Mr. Trump is ramping up pressure on Republican allies in the Senate to push the trial to a rapid close. They expect that pressure campaign to increase in the next few days, especially on Senate Majority Leader Mitch McConnell (R., Ky.).There was a time when it appeared Mr. Trump actually wanted a full-bore trial in the Senate, thinking such a process would vindicate his actions in pressuring Ukraine and delaying the delivery of military aid there. Now, though, Mr. Trump’s anger at the indignity of being impeached—one associate described him this week as “livid”—and the fear that a Senate trial with witnesses could bring unpleasant surprises has ended that line of thinking.  Still, impeachment has had its silver linings for the president’s re-election effort. Both Mr. Trump’s campaign and the Republican National Committee have used the impeachment effort to raise millions of dollars and rally supporters. Online ads have pressed the president’s case, and some have targeted the 30 House Democrats who hail from districts Mr. Trump carried in 2016.On the other side of the divide, the impeachment trial now is directly affecting the Democratic presidential campaign, by pulling off the trail a handful of senators seeking the party’s nomination. Still, the candidates don’t seem eager to focus on impeachment when out campaigning; it was barely mentioned when six of them debated in Iowa this week.SHARE YOUR THOUGHTS Do you expect the impeachment trial to go quickly? Why or why not? Join the conversation below.One Democrat who is directly countering the Trump advertising blast is former New York City Mayor Mike Bloomberg, who already has spent $217 million on television and digital ads, many directly attacking the president. Like the president, Mr. Bloomberg is effectively running the kind of national campaign usually seen much later in a general-election year.The Bloomberg effort is emerging as the Democrats’ wild card in the run-up to the Feb. 3 Iowa caucuses, which kick off voting for the party’s nomination. Mr. Bloomberg is skipping Iowa, as well as the early primaries in New Hampshire, Nevada and South Carolina, to focus on the big blocs of states that follow.Write to Gerald F. Seib at jerry.seib@wsj.com