Massive winter storm packing ‘heavy’ snow targets Upper Midwest, Great Lakes and Northeast  byDoug Stanglin, USA TODAY,USA TODAY•January 18, 2020A massive winter storm that halted all flights in and out of Chicago’s O’Hare airport for hours was expected to produce moderate to heavy snow and dangerous travel conditions over much of the Upper Midwest, Great Lakes and Northeast into Sunday.The National Weather Service warned of a „widespread footprint of heavy snows” up to a foot as the storm spread into central and northern New England.”This storm has the potential to produce widespread hazardous conditions across much of the northeastern quarter of the nation over the next day and a half,” the weather service said.Winter storm warnings were in effect in parts of upstate New York, Massachusetts and northern Connecticut, including some Boston suburbs to the west and northwest.Snow was forecast along the Interstate 95 corridor from Washington to Boston on Saturday, shifting to freezing rain and some sleet, with most precipitation south of New York City expected to end by Saturday night.A swath from Northern Rhode Island to northeastern Massachusetts was expected to get from 2 to 4 inches of snow through Sunday afternoon, according to the NWS in Boston.As the storm hovered over the nation’s mid-section, up to 7 inches of snow had accumulated in parts of Iowa by Friday night and up to 5 inches fell in parts of central Nebraska, western Iowa and  Missouri.In western Iowa, a pickup truck slid off the road and barreled toward a delivery truck. No one was injured in the heart-stopping incident that was captured on video by a camera inside the delivery truck.

Iowa State Patrol@iowastatepatrolShocking video today from a delivery truck on I-80 in Western Iowa. The AMCON Distributing driver, State Trooper, & occupants in the pickup truck were not seriously injured.If you have to be out driving during inclement weather- slow down and be aware of the road conditions. 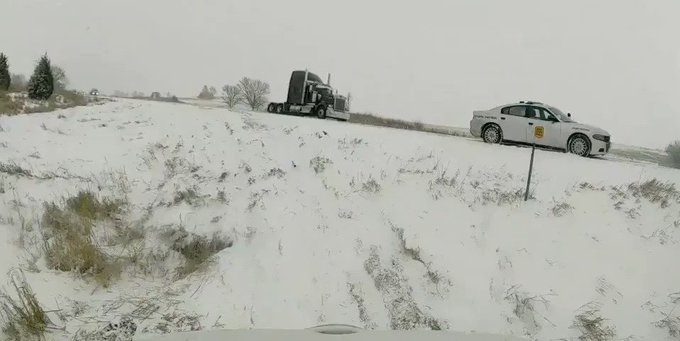 4:09 AM – Jan 18, 2020One leg of the storm brought a wintry mix to parts of the mid-Atlantic early Saturday, producing slick driving conditions.Strong winds on the northwest side of this storm were expected to produce blizzard conditions into Saturday afternoon across the eastern half of North Dakota, the eastern half of South Dakota, far western Minnesota and northwest Iowa.The winds could gust to over 50 mph, producing considerable blowing and drifting of snow and life threatening travel conditions, forecasters said.In Kansas, Gov. Laura Kelly closed state offices in the Topeka area, urging people in a news release to “stay safe and warm, exercise caution and allow road crews to do their job.”Weather: Delta plane slides off taxiway amid winter storm; airlines issue travel advisories into weekendIn Chicago, the Federal Aviation Administration lifted the flight stoppage at O’Hare on Friday night, but not before hundreds of flights were canceled at one of the nation’s busiest airports.At 9 p.m., the Chicago Department of Aviation reported nearly 690 flights had been canceled at O’Hare, with 169 flights canceled at Midway, the city’s other international airport. A winter weather advisory was issued for the Chicago area through early Saturday, with 2 to 5 inches of snow expected.The icy conditions also caused a plane to slide off a taxiway at Kansas City International Airport earlier Friday as it was taxiing to be de-iced before flying to Detroit. There were no reports of injuries aboard the plane.Nearly 90 flights to or from Kansas City International Airport were canceled Friday afternoon before of the wintry conditions.Contributing: Associated Press