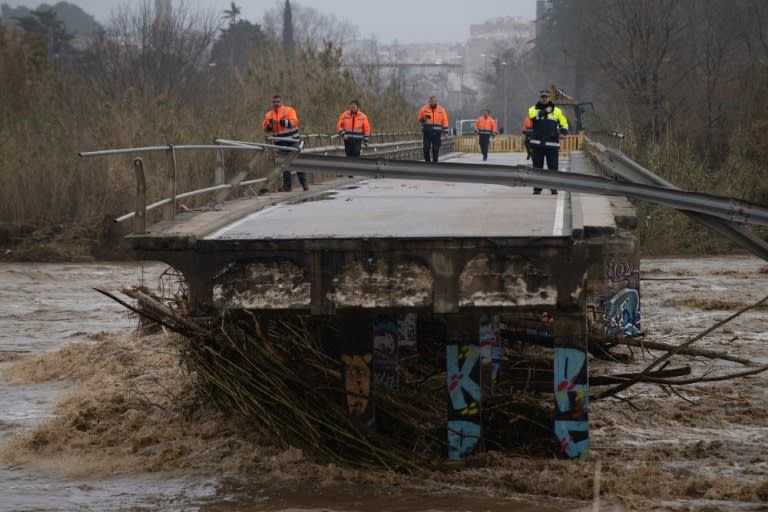 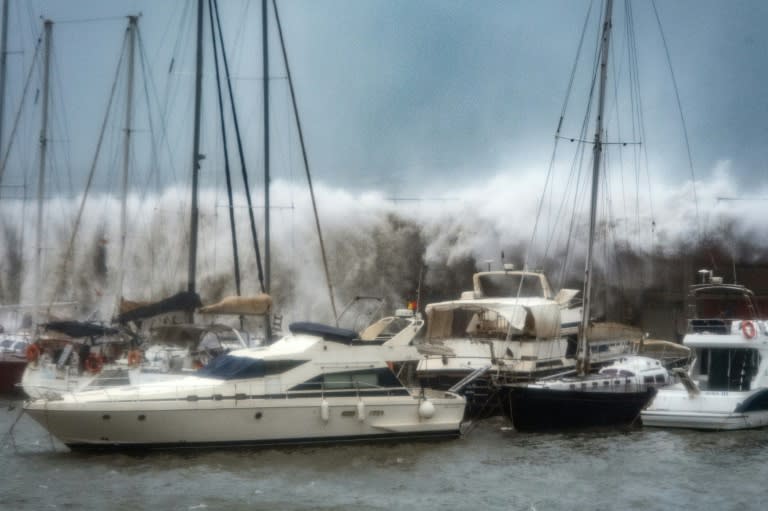 Four people are still thought to be missing after Storm Gloria crashed into eastern Spain on Sunday Four people are still thought to be missing after Storm Gloria crashed into eastern Spain on Sunday (AFP Photo/Josep LAGO)Barcelona (AFP) – The death toll from a storm that has lashed Spain with strong winds and heavy snow has risen to seven, while four people were missing, officials said.Gale-force winds and huge waves have smashed into seafront towns, damaging many shops and restaurants, wrecking beach facilities and flooding some streets in the east of the country since Sunday.The latest victim was a man who fell into the sea in the northeastern port of Palamos, emergency services said late Wednesday.Police found a body on Wednesday in a flooded area in the eastern region of Valencia where they were looking for a 67-year-old man who went missing in his car, a local police spokesman said.Two other deaths were recorded in the southern region of Andalusia — among them a 77-year-old farmer killed after a greenhouse collapsed on him in a hailstorm, police said.Four people were still believed to be missing after Storm Gloria crashed into eastern Spain on Sunday with gusts of over 100 kilometres (60 miles) per hour, massive waves, snow and freezing rain.National weather agency Aemet said the storm was starting to abate on Wednesday although it kept the northeastern region of Catalonia and the Balearic Islands on alert.In the south of France, 1,500 people were evacuated as two rivers quickly overflowed overnight on Wednesday.Meteorologists said the rains would continue throughout Thursday, varying in intensity, in France’s southernmost Mediterranean departments of the Pyrenees-Orientales and Aude.- Flooded rice fields -While winter storms are not rare on Spain’s Mediterranean coast, Spain has suffered several episodes of unusually intense rainfall in recent years.Seven people died in September 2019 in flash floods in southeastern Spain and in October 2018, 13 people died on Mallorca as intense rain caused rivers to overflow with raging waters that tore through streets and swept away cars.A study published in October by the Mediterranean Experts on Climate and Environmental Change (MedECC), which groups more than 600 scientists, said episodes of heavy rain could increase in the region by 10-20 percent because of climate change.

A Spanish town has been engulfed in thick marine foam as a tidal surge along the Catalan coast swept at least two miles inland.

Storm Gloria has claimed at least eight lives since it began pummelling the region with rain, snow and hail on Monday, leaving more than 200,000 people without power, levelling buildings, destroying rice paddies and triggering weather alerts in more than 30 provinces.

Three people are still reported missing, including a 25-year-old British man in Ibiza and another who fell into the sea while trying to moor his boat at a Costa Brava port. Waves reached a record 13.5m, port authorities said.

It was described as the worst storm since 2003 “and likely of this century”, said the head of Barcelona’s beach services, Dani Palacios.

In Tossa del Mar, residents toiled to sweep thick carpets of sea foam from the streets, as footage showed angry flurries blowing through the air and coating the walls of buildings to a height of several metres.

Created as rough seas churn disintegrating organic matter such as algae, sea foam is usually harmless to humans and typically indicates a productive offshore ecosystem. But depending on the algae present, as bubbles within the foam pop they can release certain airborne toxins which can irritate eyes and lungs, according to the US National Ocean Service.

A body was found in an Alicante river, Spanish police said, while another person died after a building collapsed in nearby Alcoy, according to a rescue services official.

A man working in a greenhouse was killed as the glass structure was pounded by hail, an Almeria mayor told Efe news agency. Valencian authorities blamed the death of a homeless man on the storm causing temperatures to plummet.

As the flooding surged inland, seawater engulfed one of the country’s most important wetlands – the Ebro delta – inundating thousands of hectares of rice plants.

One dead, five missing after snowmobiles fall through ice in Canada 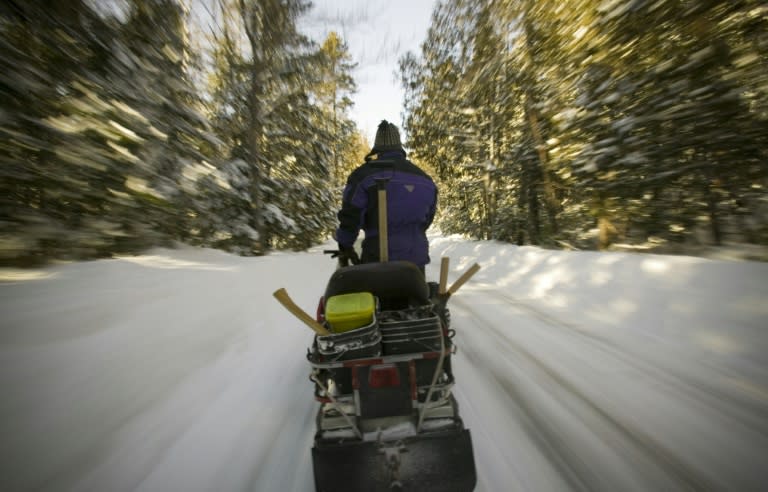 Snowmobiles are popular in Canada but can be dangerous — a guide died and five French tourists were missing after the group plunged through ice (AFP Photo/DAVID BOILY)Montreal (AFP) – A Canadian guide died and five French tourists were missing after their snowmobiles plunged through ice into freezing water in northern Quebec, Canadian police said Wednesday.The group were riding near where a river exits the Saint-Jean lake, and were outside the approved area for snowmobiles, police spokesman Hugues Beaulieu told AFP.Nine people, including the excursion guide, were on the trip when the ice broke underneath them in the dark on Tuesday evening.Police said they were alerted by two of the tourists who had rescued a third from the water.The 42-year-old guide, Benoit L’Esperance of Montreal, was pulled out by emergency response teams and taken to hospital, but he died overnight, Beaulieu said, adding „five French tourists are still missing.”Officials said that details of the accident remained unclear.Survivors were hospitalized in the nearby town of Alma and treated for minor injuries and hypothermia.Ice on the lake is often very thick, but it is thinner where the lake funnels into the Saguenay River.The tourists had hired snowmobiles in the village of Saint-Michel-des-Saints, nearly 300 kilometers (185 miles) away by trails, according to Canadian media.- Thin ice -Powerful snowmobiles on skis, which can reach the speed of 140 kilometers per hour, are popular with Quebecers and foreign tourists, but cause numerous accidents each year.Divers and two helicopters searched the area on Wednesday, alongside the police and army.”This sector was not part of a marked trail, they were off-piste,” said the police spokesman.Authorities planned to continue searching through the night, while underwater and aerial reconnaissance were to pause until Thursday morning.Earlier, one of the search helicopters crashed into the icy lake, sending the pilot to hospital, police said.France’s deputy consul general in Quebec, Laurent Barbot, who visited the site, told reporters that the missing French tourists were from the east of France.The three survivors are „physically doing well, but are in shock,” he said.French television said the survivors hailed from Haut-Rhin. The missing tourists, aged 24 to 58, are Alsatian or Vosgian.The daily newspaper Dernières Nouvelles d’Alsace said several of the group were friends who flew to Canada on Sunday.”People who know the area know that you should not go on the ice because it is very fragile due to strong currents,” Gaetan Gagne, president of the Saint-Jean lake snowmobile club, told public broadcaster Radio-Canada.Quebec’s acting public safety minister, Andree Laforest, announced an investigation.However the first priority, she told a press briefing, „is to find the missing as soon as possible.””The government has been in contact since this morning with the French authorities and the families will be notified,” she added.Some worry that the tragedy will harm winter tourism in Quebec. Snowmobiling in particular is very popular with foreign tourists.There are 33,000 kilometers of marked snowmobiling trails in the Canadian province, according to the local snowmobiling association.But there are an average of 20 snowmobile deaths each year.In February 2019, two French tourists, a mother and her son, were killed in a snowmobile accident in a Quebec nature park.
Canada: snowmobiles plunge through ice leaving one dead and five missing   by Leyland Cecco in Toronto, The Guardian•January 22, 2020

Photograph: HO/Sûreté du Québec/AFP via Getty Images Emergency teams in Canada are searching for a group of French tourists after a snowmobile accident on Quebec’s Lac Saint-Jean left one dead and five missing.Police say the group of nine were travelling across the shallow lake on Tuesday evening when the ice gave way. Two of the drivers managed to stop their vehicles before reaching the ice, and were able to rescue another member of the group. The guide, a 42-year-old man, was also rescued on Tuesday evening but later succumbed to his injuries. He died in hospital on Wednesday morning.Rescue crews – including Canadian military helicopters – searched the area 200 kilometres north of Quebec City on Tuesday evening for the missing five members of the group. Divers arrived at the scene on Wednesday morning to begin their search of the area.Sgt Hugues Beaulieu of Quebec police told reporters the group, which was travelling between the towns of St-Henri-de-Taillon and Alma, probably departed from the marked snowmobile trails, ending up on the lake.“They must not have known the area well, because it’s an area known for having critically thin ice because of the current,” he said – adding that the official trails are inspected daily for safety.Snowmobile tours are an increasingly popular way to explore the Canadian wilderness. The region of Lac Saint-Jean and Saguenay, where the group went missing, has hundreds of kilometres of well-maintained trails through boreal forest and picturesque towns.But a growing number of snowmobilers are killed every year in avalanches and crashes – many of which are preventable, say police. In 2016, a group of five “very prepared” riders were killed by an avalanche near the mountain town of McBride, British Columbia.In Ontario and Quebec, fatalities are increasingly common when the vehicles break through thin ice. Over the last 20 years, the Canadian Red Cross says 398 people have died as the result of immersion in frigid water while snowmobiling. 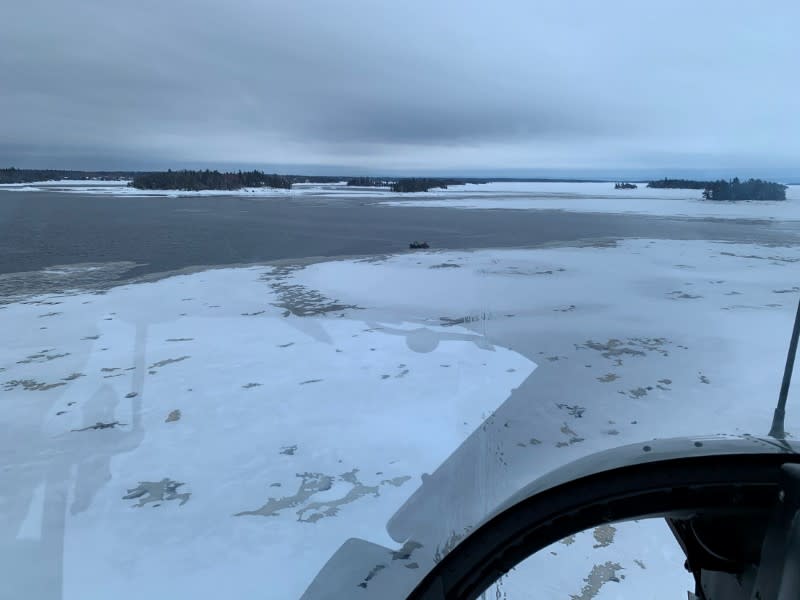 A helicopter carrying provincial police officers from the Surete du Quebec searches an area for five missing French snowmobilers off Beemer IslandBy Denise Paglinawan TORONTO (Reuters) – A tour guide died and five French tourists were missing after a group of snowmobilers plunged through the ice into the water near Québec’s Lac-Saint-Jean Tuesday night, police said.Eight French snowmobilers, along with their guide, were hiking near St-Henri-de-Taillon when the accident happened, police said on Twitter on Wednesday.Three tourists were being treated for shock in a hospital in Alma, media reported. Their guide, a man in his forties, was recovered from the water by firefighters and taken to a hospital, but died Wednesday morning. Five tourists were missing.The Lac-Saint-Jean region is popular with tourists during the winter. According to the Montreal Gazette, 20 people were killed in snowmobile accidents between 2010 and 2019 while visiting Quebec, including six tourists from France.Most of the victims died after losing control of their snowmobiles on marked trails, the paper said.Police said a search was under way for the five tourists.(Reporting by Denise Paglinawan; editing by Nick Macfie)