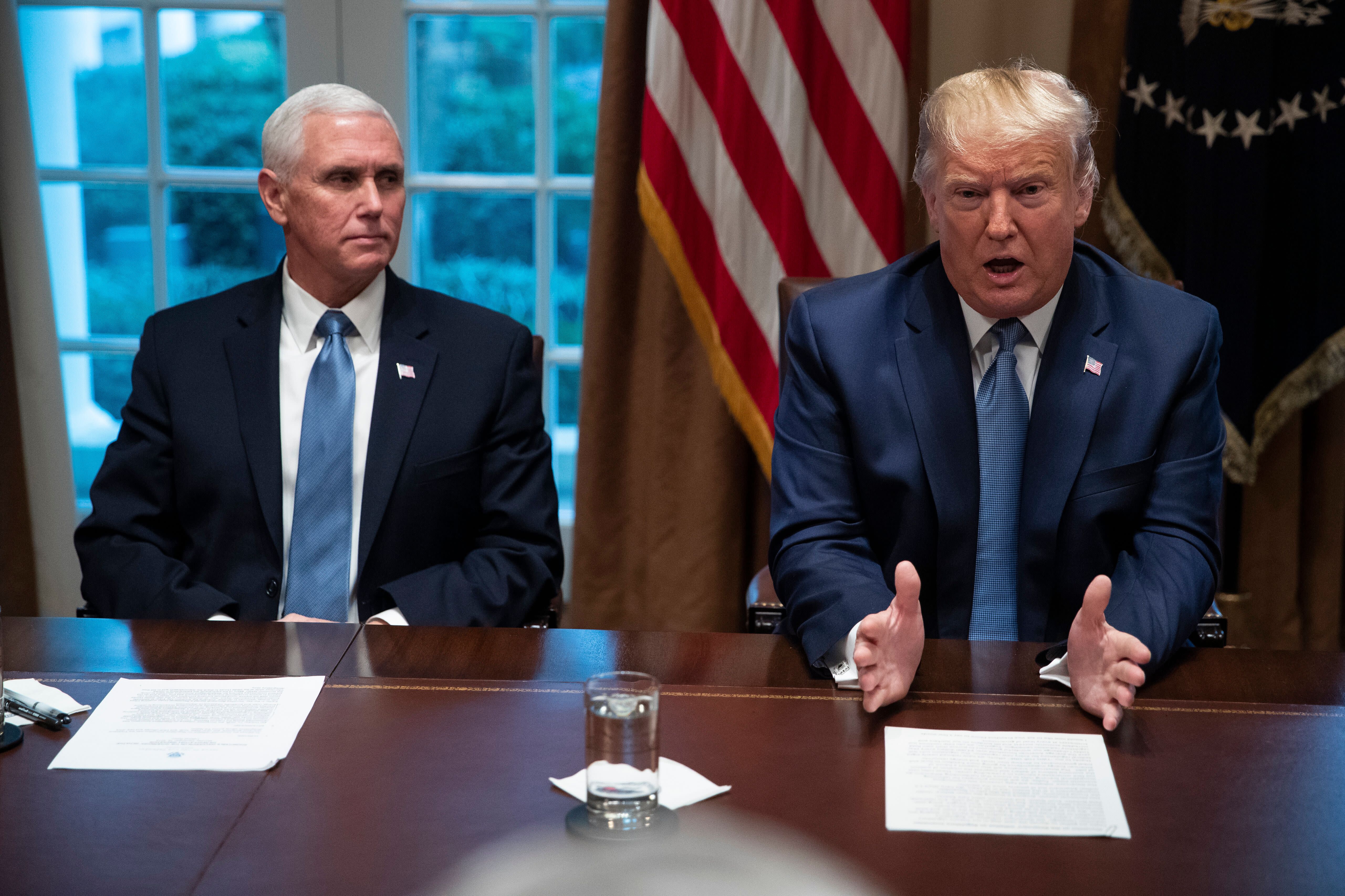 Democrats Demand White House Turn Over Ukraine Testimony From Pence Aide Democrats on Wednesday demanded the White House declassify a document from one of Vice President Mike Pence’s aides who listened in on his call last year with the president of Ukraine, arguing that the public would be able to learn more about White House attempts to pressure the country for a political favor if the document is made public.The party’s House impeachment managers argued Wednesday before the Senate that the document — supplemental material provided to the House by Jennifer Williams, a special adviser on Europe and Russia to Pence — should not be classified and alluded that the vice president’s office was attempting to conceal it because it was embarrassing.“This supplemental testimony will allow the Senate to see further corroborative evidence as it considers articles of impeachment,” a Democratic official working on the Senate trial said in a statement to reporters. “If declassified, it would provide the public further understanding of the events in question.”Pence spoke with Ukrainian President Volodymyr Zelensky on Sept. 18, and Williams testified that it was a “very positive” follow-up to a meeting the pair had earlier that month. But House Intelligence Committee Chairman Adam Schiff (D-Calif.) said in December that Williams provided lawmakers additional classified evidence about the Pence phone call after that deposition. Schiff called on Pence at the time to make public the document, saying there was “no legitimate basis” for the vice president to assert it was classified.

House Intelligence Committee@HouseIntel Despite repeated Congressional requests, Vice President Pence has refused to declassify his aide Jennifer Williams’ additional testimony.
„I’ve read that testimony. And I’ll just say: A cover up is not a proper reason to classify a document.” –@RepZoeLofgren 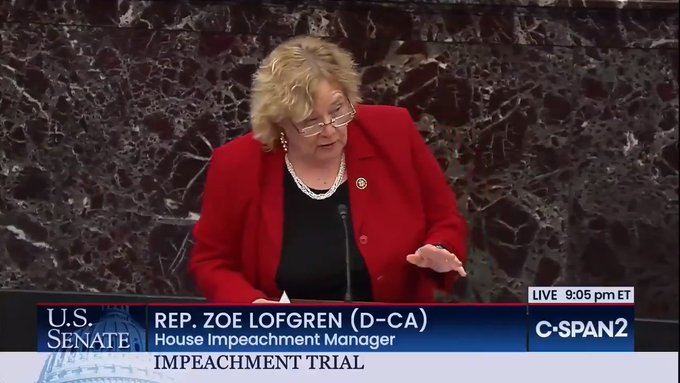 4:23 AM – Jan 23, 2020 It’s unclear what is in the document, but Rep. Zoe Lofgren (D-Calif.), one of the party’s impeachment managers who has reviewed it, alluded that its contents contained damaging information about the call between Pence and the Ukrainian president.“Now I’ve read that testimony. Now I’ll just say: A cover-up is not a proper reason to classify a document,” Lofgren said during the Democrats’ oral arguments on Wednesday. “We urge the senators to review it, and we ask again that the White House declassify it. There is no basis to keep it classified, and again, in case the White House needs a reminder, it’s improper to keep something classified just to avoid embarrassment.”Lofgren continued to note that Pence has said he has no objection to the White House releasing the full transcript of his call with Zelensky. But despite that assertion, his office has refused multiple times to declassify Williams’s supplemental testimony about the call.At the end of the Democrats’ first day of oral arguments, Chief Justice John Robert said a “single one-paged classified document identified by the House managers for filing with the secretary of the Senate” would be made available to all senators to review in a classified setting.But Democrats have continued to call for its public release.Trump’s pressure campaign was the basis for two articles of impeachment passed by the House last month charging abuse of power and obstruction of Congress. The Senate is holding a trial on those articles to determine if he should be removed from office.As part of the House investigation, lawmakers heard from a parade of current and former White House officials who described Trump’s demand that the Ukrainian leader announce an investigation into a political rival, Joe Biden, and his son Hunter.Williams was one of a handful of national security aides who listened in on Trump’s July 25 call with Zelensky in real time, and she told House lawmakers in closed-door testimony that she believed President Donald Trump’s pressure campaign was “unusual and inappropriate.”“I found the specific references to be — to be more specific to the president in nature, to his personal political agenda, as opposed to a broader … foreign policy objective of the United States,” Williams told House investigators, according to a transcript from her deposition.

Trump minimizes severity of head injuries in Iran attacks  BY  JILL COLVIN,Associated Press•January 22, 2020Trump downplays brain risk of 11 U.S. service members in Iran’s recent attack WASHINGTON (AP) — President Donald Trump on Wednesday minimized the severity of head injuries sustained by U.S. troops during an Iranian missile strike on an Iraqi air base as he was pressed on why he’d claimed no troops had been injured in the attack.“I heard they had headaches and a couple of other things … and I can report it is not very serious,” Trump said at a press conference in Davos, Switzerland, arguing that potential traumatic brain injuries are less severe than, say, missing limbs.“No, I don’t consider them very serious injuries relative to other injuries that I’ve seen,” the Republican president said. “I’ve seen what Iran has done with their roadside bombs to our troops. I’ve seen people with no legs and with no arms. I’ve seen people that were horribly, horribly injured in that area, that war.”“No, I do not consider that to be bad injuries, no,” he added.In addition to the 11 service members who were flown out of Iraq on Jan. 10 and Jan. 15 for further examination of concussion-like symptoms, defense officials said that about 10 more were flown to Germany in recent days. Most were being treated for symptoms related to possible traumatic brain injury; a smaller number may have been suffering from psychological trauma, according to two defense officials who discussed the matter on condition of anonymity.The exact nature and severity of the apparent brain injuries has not been publicly released.Trump has repeatedly claimed that no Americans were harmed in the Iranian missile strikes on Jan. 8, which came in retaliation for a U.S. drone strike that killed Qassem Soleimani, Iran’s most powerful military generaThe question of American casualties was especially significant at the time because Trump cited the fact that no Americans were killed or inured as driving his decision not to retaliate further and risk a broader war with Iran.But in the days following the attack, medical screening determined that some of the U.S. troops who took cover during the attack were suffering from concussion-like symptoms. Last week, 11 U.S. service members were flown from Iraq to U.S. medical facilities in Germany and Kuwait for further evaluation of concussion-like symptoms.

Since even before Prince Harry and Meghan Markle announced their plans to step back from the royal family and split their time between Canada and the UK, the public has wondered about their son’s voice.

Would Archie speak the Queen’s English? Could he inherit his mother’s California accent? Would it be possible for Archie to sound like a mix of both his parents?

Now that Archie will likely spend a significant amount of his childhood in Canada, a linguistic expert said it’s become more complicated.

„There are many variables,” Jack Chambers, a Canadian linguist and professor of linguistics at the University of Toronto, told Insider. „But one thing is certain — Archie will sound different from both his mom and his dad.”

If he spends significant time in Canada, Archie will likely „sound” Canadian

Chambers told Insider that factors like place of schooling, friends’ accents, and whether or not Archie receives elocution training will have large roles in the evolution of his accent. With Canadian, English, and American accents all at play, according to Chambers, there are a few accents Archie could end up speaking with, although a Canadian accent is most likely.

And while speculation before Harry and Meghan’s bombshell announcement of their move to Canada was that Archie would probably have an English accent similar to his father’s, now, Chambers said, Archie is more likely to sound like Meghan.

„If their son, Archie, is mainly raised in Canada and attends playgroups, schools, birthday parties, and sports activities with mainly Canadian kids, he will sound like them,” Chambers said. This means that Archie will say „aboot” for „about” and „oot” for „out,” which is known as Canadian raising.

He added that if Archie goes to school in Canada and spends time with Canadian peers, it’s likely that he’ll use Canadian vocabulary, which is identical to his mother’s American vocabulary,  instead of British vernacular. For example, Archie would be more likely to call the front of a car the „hood” instead of the „bonnet” and say „sidewalk” instead of „pavement.”

If Archie has speech training, he may speak with a slight English accent

Chambers added that if Archie is raised in Canada but has speech lessons to sound more „British” during his public duties, he could sound Canadian but with some English features. For example, „rather” will come out „RAH-ther” and „whales” will have an „h” sound at the start.

If Archie were to attend school in England, Chambers said he would develop a standard Southern English accent, like that of his cousins, George, Charlotte, and Louis.

„If his best friends are his cousins,” Chambers said, „he will probably have a posh version of that accent, at least in public.” He said that the indication, though, is that Archie will not be raised among Prince William and Kate Middleton’s children.

Police block a road following a shooting in Seattle

(Reuters) – A violent altercation that escalated into gunfire in downtown Seattle left one woman dead and six other bystanders wounded outside a fast-food restaurant on Wednesday, and police said they were searching for at least two suspects.

The precise circumstances of the shooting, what precipitated the bloodshed and the number of people involved remained murky hours after the incident, which unfolded in a busy shopping district during the evening rush-hour.

The violence, which investigators deemed was „not a random incident,” grew out of a dispute in front of a McDonald’s restaurant, Seattle Police Chief Carmen Best told reporters at a briefing near the crime scene.

The chief added there were „multiple people involved as shooters” who apparently fled the scene, but she declined to specify how many suspects police believed were at large.

„We’ve locked down the scene. We have no active shooting at this point … so everything is safe for the night.”

Seattle television station KOMO-TV, citing witness accounts, reported that two men were seen arguing on the street before pulling guns on each other and opening fire as pedestrians around them scattered for cover.

All of those hit by gunfire were believed to have been bystanders, authorities said.

A Fire Department spokesman described the lone fatality as a woman about 40 to 50 years of age, who was found dead at the scene. Seven other victims were brought to Harborview Medical Center’s emergency room, a hospital spokeswoman said.

One of those patients was a woman in her 50s who was listed in critical condition as she underwent emergency surgery, according to Seattle Fire Chief Harold Scoggins. Another was a 9-year-old boy in serious condition, he said.

An office worker identified only as Bill told KOMO-TV he heard gunfire and saw scores of people running away in terror as he watched the scene unfold from an upstairs office window .

„It was sheer panic,” he said. „I’ve never seen anything like it.”

(This story corrects time element in paragraph 1 to Wednesday)