Doyle Rice, USA TODAY,USA TODAY•February 3, 2020 A potent winter storm that dumped heavy snow on the Rockies Monday will crawl toward the central and eastern U.S. throughout the rest of the week, forecasters say.On Monday, the storm forced the closure of schools and roads in Wyoming, Idaho and Utah, and it caused hourslong flight delays at Salt Lake City’s airport. Many locations in Utah recorded more than a foot of snow Monday, the National Weather Service reported.Several Utah school districts took the rare step of canceling classes. It was only the second snow day for the Salt Lake City School District in nearly 20 years. In Denver, temperatures Monday afternoon were in the 20s as it snowed, a day after a sunny high of 74 degrees, AccuWeather said.After moving away from the Rockies on Tuesday, the storm will produce a band of snow and ice from the southern Plains to the interior Northeast over the next few days, the National Weather Service said.Tuesday night and into Wednesday, „several inches of snow is possible in a swath from northern Texas to southwestern Missouri,” said AccuWeather Meteorologist Adam Sadvary.The wintry weather will spread toward the southern Great Lakes, Pennsylvania, New York and parts of New England on Wednesday night and into Thursday, Weather.com said.

In the South, heavy rainfall, localized flooding and severe thunderstorms are forecast Tuesday through Thursday.

„Rainfall amounts of 1 to 3 inches are forecast in a swath through Arkansas, the boot heel of Missouri, and into Kentucky and the Tennessee Valley through Wednesday evening,” the weather service said. „There is some potential for flash flooding where heavy rainfall occurs in these areas.”

Because of the wet start to the year, rainfall rates will not need to be exceptionally high to produce a flash flood risk, AccuWeather warned.

There is also a small risk of severe thunderstorms across portions of the lower Mississippi River valley on Tuesday, the Storm Prediction Center said, and along the Gulf Coast on Wednesday.

In the South and East on Monday, unusual warmth was the main weather story: According to BAM weather meteorologist Ryan Maue, nearly 50 million Americans saw temperatures of at least 70 degrees Monday afternoon.

Strong storms are expected to move through North Carolina this week, dumping inches of rain across the state, according to the National Weather Service.

The highest rain totals will be in the mountains, with some areas west of Asheville expected to get 4 to 5 inches between Wednesday and Thursday, forecasters said.

“A wet & wild storm is in store for us” on Wednesday and Thursday, with powerful thunderstorms on Thursday, the NWS office in Greenville, South Carolina, said on Twitter. “This maybe the most rain from a single storm in #2020.”

Heavy rain is expected throughout the state, but the mountains could see the most rainfall — 3 to 6 inches, North Carolina Emergency Management said. “Excessive rainfall may lead to flooding in some areas.”

Communities from Charlotte to Raleigh and Fayetteville should expect widespread rain with 2 to 4 inches possible, according to NWS forecasters in Raleigh.

Timing will also depend on geography, with rain moving from the mountains starting Tuesday afternoon to eastern parts of the state some time Friday, according to North Carolina Emergency Management.

“Strong to severe thunderstorms will develop along and ahead of the cold front Thursday into Friday morning. Heavy rain, damaging winds and small hail are the main storm threats,” emergency management officials said on Facebook.

Don’t get used to the nice weather today. A wet & wild storm is in store for us Wed into Thur with widespread heavy rain at times and the potential for stronger thunderstorms especially into Thur. This may be the most rain from a single storm in #2020. #NCwx #SCwx #GAwx #CLTwx 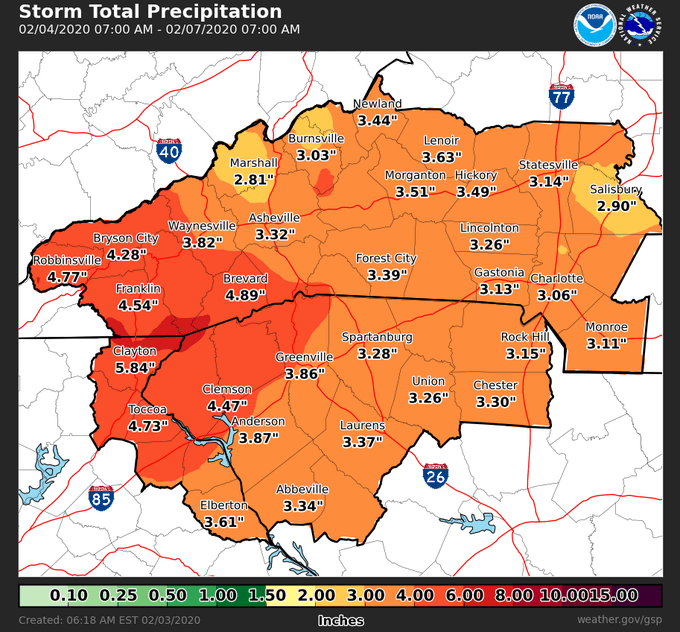 High temperatures are expected to drop by about 10 degrees across the state after the storm moves through, with highs around 50 in the mountains and 60 in the rest of the state, according to state officials.

Some rivers across the state could flood from the storm system, and people should watch out for potential flash flooding, damage from high winds and the potential for tornadoes, according to the National Weather Service.

Widespread flooding, power outages and bridge washouts have shut down large portions of British Columbia, leaving tens of thousands of Canadians crying for help and hundreds of visitors at Sasquatch Mountain Resort trapped.

Around 500 people were staying at Sasquatch Mountain Resort in Fraser Valley when a weekend landslide wiped out the only connecting road down the mountain. As drone footage showed, immense damage from heavy flooding rendered the Hemlock Valley Road pass unusable.

To retrieve visitors, the Ministry of Transportation has been forced to fly residents to safety via helicopters, according to Global News. Around 200 people have been relocated by helicopter thus far, resort spokesperson Shelby Lim said. However, those helicopter saves have come with a price: $150 per person.

„There are people up here with medical conditions and … important medical appointments, and to charge them $150 to get off the mountain?” Jim Briar, a volunteer firefighter from the local area, told Global News. „I understand it’s no slam against anybody, but I’m wondering what the provincial emergency program is doing, or if they are doing anything, to accommodate these problems.”

Briar added that the resort was stocked with plenty of food and the return of electricity, after dealing with power outages for over 36 hours, relieved worried residents. The resort’s cafeteria and pub continued serving food to the guests, and individuals were still charged for the meals.

According the resort, power was restored shortly before 3 p.m, local time, on Sunday.

Lim said once power was restored, people were able to return to their heated cabins safely, where they can cook their own meals. Along with providing rides to safety, Lim added that the helicopters have also arrived stocked with food, supplies and propane for generators.

„If anybody is running out of anything, we’re here to help and assist. We’ve got lots of food up here, the helicopter companies are able to bring in more fuel,” Lim said. „Anybody who lives on the mountain, if they need medicine, diapers, dog food, anything, we can get back to them and help them.”

Authorities expect road repair efforts to take at least five days. In the 9:30 a.m. update on Monday morning, the resort said they are still waiting on official word from the Ministry of Transportation.

„If road evacuation does not occur, we will continue to run a helicopter shuttle through Librico Helicopters for $150 per person,” the resort said on Facebook. „If you are on hill and interested, please visit Guest Services to sign up, the drop off is at the Chilliwack airport.”

„The road is not open, however, we are currently waiting on an update from the Ministry of Transportation and Infrastructure regarding a temporary evacuation lane,” the resort said in its statement. „If it is safe to do so, the Ministry of Transportation will escort guests down the road this afternoon with a certified escort/pilot vehicle. Please do not attempt to leave the mountain on your own as you will not be permitted down.”

Kent Mayor Sylvia Pranger declared a state of emergency for the municipality on Friday and said about 40 homes had to be evacuated north of Harrison Hot Springs when Rockwell Drive washed away.

REMINDER – Rockwell Drive – CLOSED due to a washout between Dogwood lane and Rockwell Lane. Assessment in progress, detour not available. Next update February 3 at 9 AM. #HarrisonHotSprings
For more information: http://bit.ly/2S6PhoF 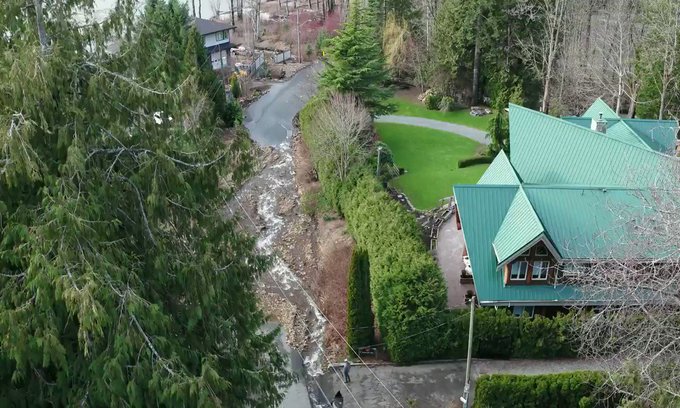 According to the Vancouver Sun, over 50 people were evacuated in the area after major roadways were closed. A portion of the Trans-Canada Highway was shut down, further pushing the need for evacuations.

The east coast of Vancouver Island was under a flood watch throughout the weekend, and the state of emergency led to widespread closures, including Vancouver Island University’s Cowichan campus.

„All classes and examinations are cancelled, and services are suspended. All employees and students are asked not to travel to the Cowichan campus today,” the university announced on Saturday. „The next update will be on Sunday, February 2 at 6:30 pm for classes on Monday, February 3. Please do not start to travel to VIU’s Cowichan campus until you receive this update.”