JON HAWORTH and EMILY SHAPIRO,Good Morning America•March 4, 2020Death toll reaches 25 after tornadoes rip through Tennessee towns Twenty-four people are dead after devastating tornadoes ripped through Nashville and other areas of Tennessee, flattening homes, tossing airplanes and downing power lines, according to the governordThe tornado in Nashville was just one of three to hit Tennessee early Tuesday. Eighteen people died in Putnam County, Tennessee, officials said Tuesday night, after earlier in the day reporting that 19 had died there.Fatalities were also reported in Wilson, Davidson and Benton counties.

PHOTO: A woman walks past buildings damaged by a tornado, March 3, 2020, in Nashville, Tenn. (Mark Humphrey/AP)

PHOTO: A man walks past storm debris following a deadly tornado, March 3, 2020, in Nashville, Tenn. (Mark Humphrey/AP)A state of emergency was declared in Tennessee as a result of the damage.Two of those killed were Michael Dolfini, 36, and Albree Sexton, 33, according to Nashville police.

Metro Nashville PD@MNPDNashville The 2 persons fatally injured by debris overnight on McFerrin Avenue when the tornado went through East Nashville are identified as Michael Dolfini, 36, & his girlfriend, Albree Sexton, 33. They had just left Attaboy lounge, where Dolfini worked.10:17 PM – Mar 3, 2020About 47,000 are without power and dozens of building have collapsed, officials said.Winds reached at least 155 mph — EF-3 tornado level — in Mount Juliet and Donelson.

PHOTO: Debris covers a car near after a tornado touched down in Nashville, Tenn., March 3, 2020. (Shelley Mays/The Tennessean/USA TODAY via Reuters)

Dept of Correction@TNTDOC1 TDOC has also been affected by the overnight Tornado in middle Tennessee. These are photos of the damage from the site of the historic Tennessee State Prison. 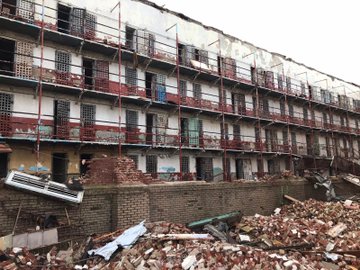 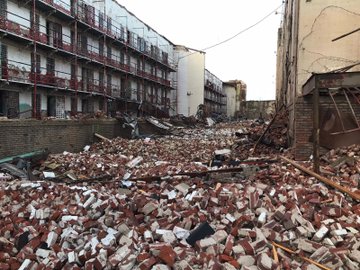 Elizabeth Lane WKRN@elizabethlanetv Hopewell Baptist Church is one of several destroyer in North Nashville. It’s been here since 1823. Devastating. @WKRN  Some Super Tuesday polling stations were impacted, officials said. Alternative locations will be offered for voters. Tennessee Secretary of State Tre Hargett said residents can call the Division of Elections toll-free at 1-877-850-4959.A judge ruled that all Tennessee polling stations would have to extend Super Tuesday hours, a Democratic Party spokeswoman told The Associated Press. 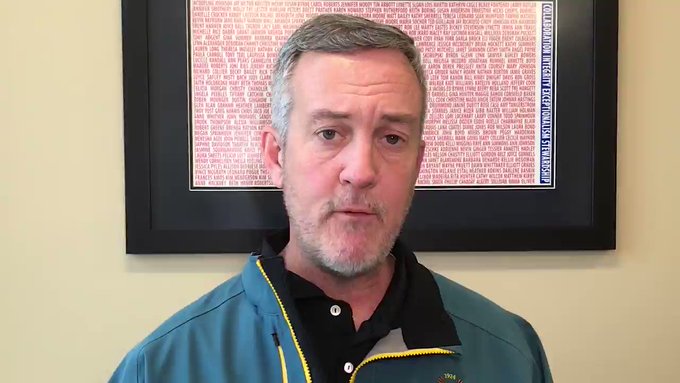 37 people are talking about this

Nashville resident James Duncan said sirens started in the middle of the night before „howling” winds moved in.

„Things started hitting the window, and my girlfriend and I shot out of bed and darted for the bathroom. We could hear objects slamming against the building … it was terrifying,” Duncan told ABC News. „They say tornadoes sound like a train … they were not lying. The feeling in my head from the pressure was insane. I’ve never felt anything like it. We were shaking.”

„Then the power cut out and the noise started to fade,” he continued, but he smelled a gas leak and first responders quickly evacuated the apartment to investigate the suspected leak.

„Downed power lines were everywhere,” Duncan added. „We had to walk roughly a mile through the debris and wreckage ‘til we could get to a zone where a friend could pick us up. I was trying to reach out to friends in the area to see if they were OK. It was chaos. It felt like we were in a bad dream.”

This is heartbreaking… prayers for everyone affected 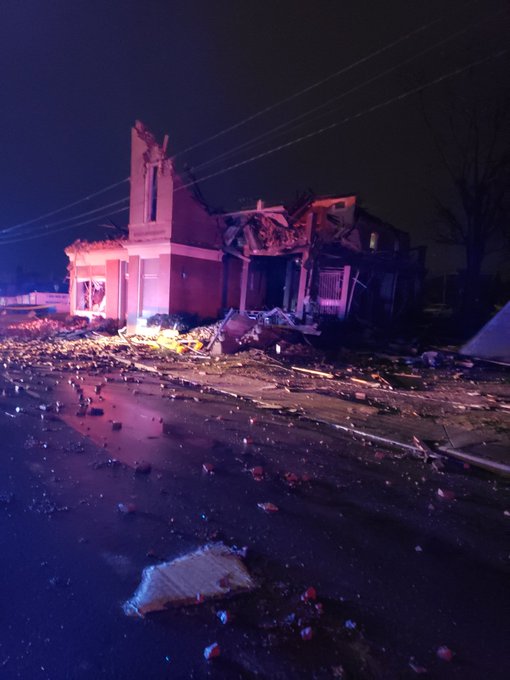 29 people are talking about this

My friend found THIS airport terminal sign in her yard after the overnight storms. She lives in Mt. Juliet… more than *10* MILES from @Fly_Nashville !! @WKRN 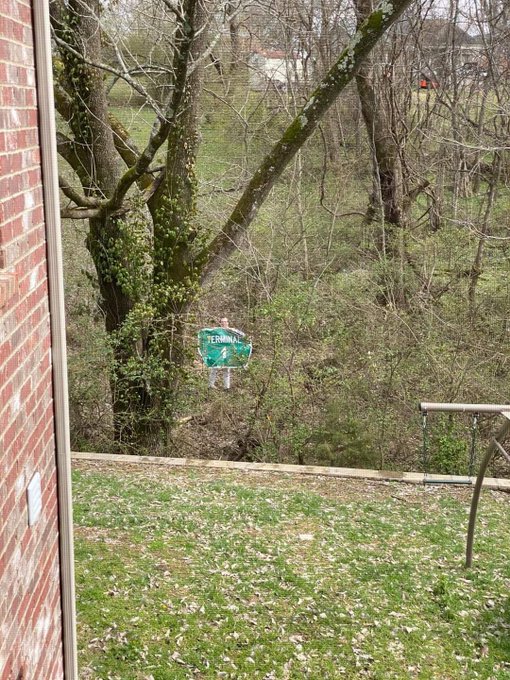 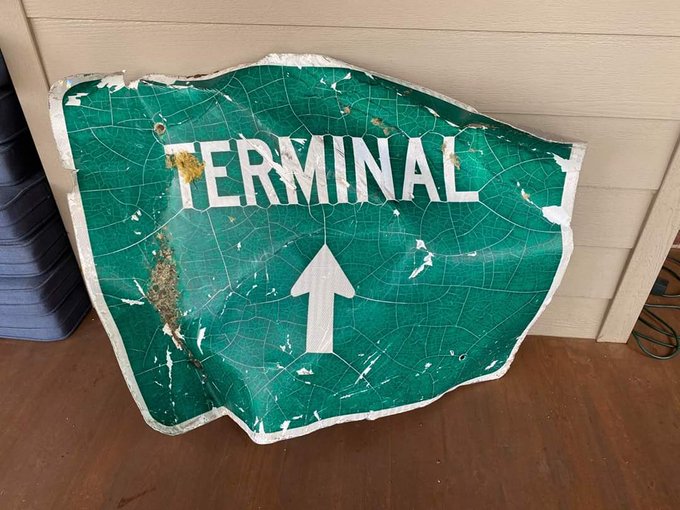 130 people are talking about this

Jeremy Vaughn said he spotted „the funnel cloud” and heard what sounded like a train.

He told ABC News he ran down to the first floor of his apartment building, where he huddled with his neighbors, who „were crying and screaming — we didn’t know what was going on.”

Outside, Vaughn added, it „looked like a war zone,” with the apartment building’s roof on the ground, the street littered with insulation and pieces of wood.

I’m devastated by the destruction of our cherished neighborhoods and businesses. We’re doing everything we can to respond. We will heal as a community and then begin the rebuilding process. The hubNashville 311 phone line is open 24 hours to take storm related requests. 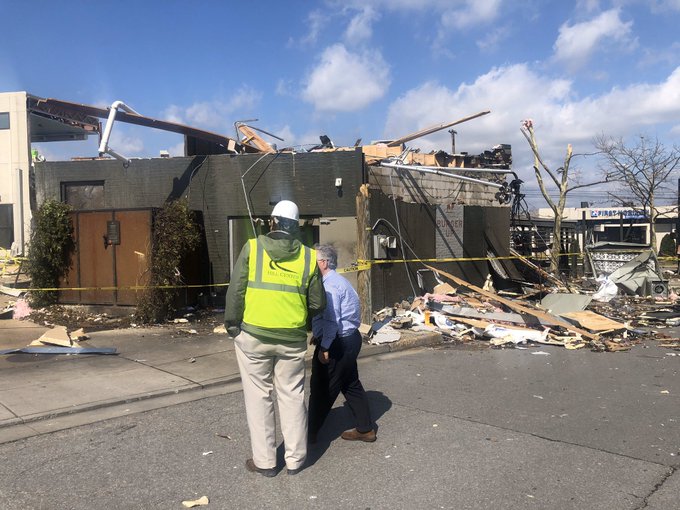 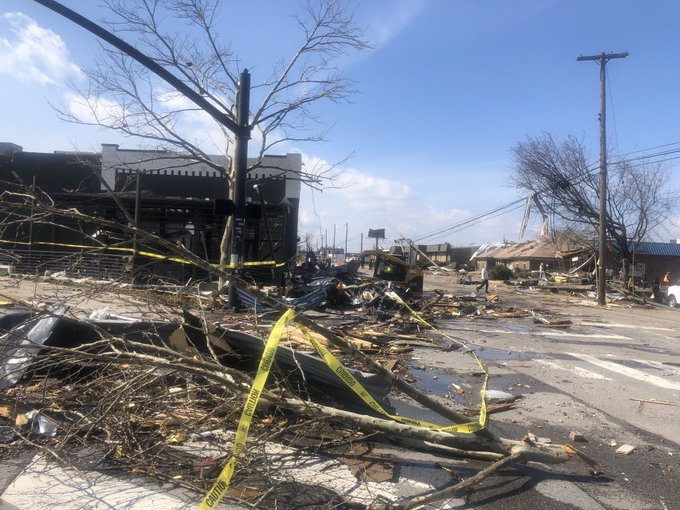 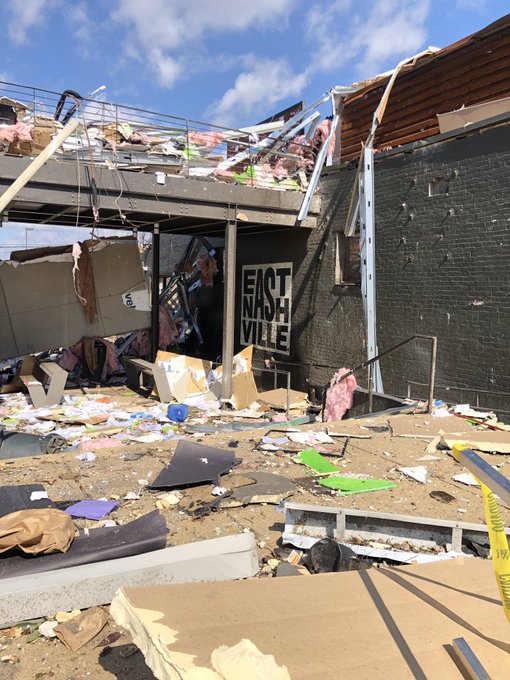 18 people are talking about this

One of our helicopters just landed after surveying tornado destruction from overnight. 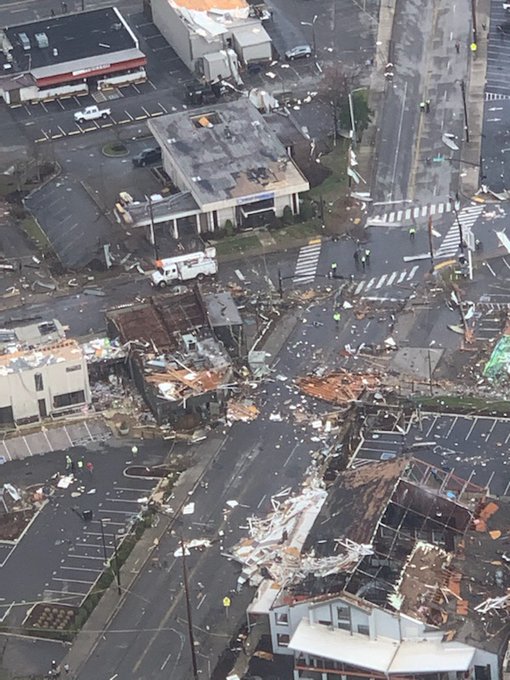 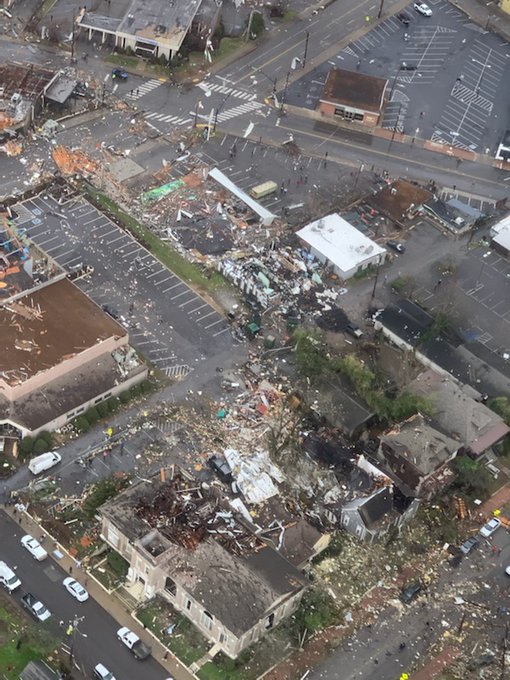 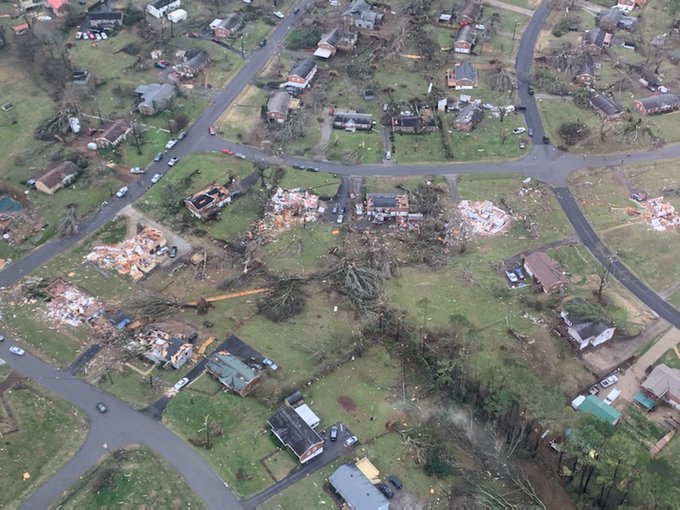 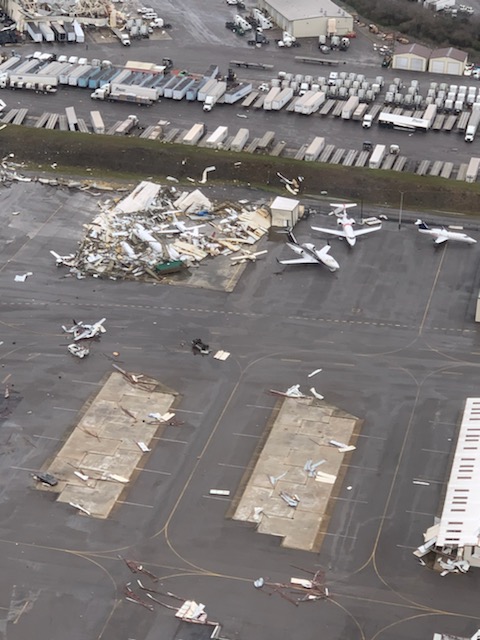 665 people are talking about this

It’s like driving through a war zone. Cars destroyed, buildings destroyed…breaks my heart. 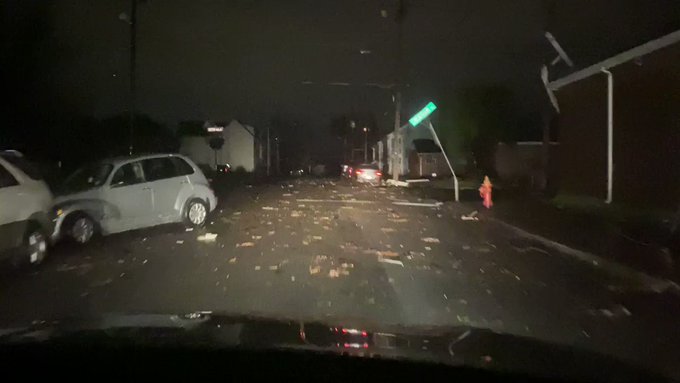 132 people are talking about this

In hard-hit Mt. Juliet, 7-year-old Brock Maxwell was rescued by Mt. Juliet Fire chief Jamie Luffman in the aftermath of the twister.

Brock’s family took video of the moment Luffman carried him to safety across live wires in the middle of the night.

The team at ⁦@Fly_Nashville⁩ will rebuild our sister airport John C. Tune. Excellent response by all, tomorrow we start cleaning up. We can replace hangars and airplanes. Thankful no one was injured.

105 people are talking about this

23 people are talking about this

President Donald Trump in a tweet pledged the federal government’s support. Trump said he will travel to Tennessee on Friday.

This alley is filled with pieces of multiple homes. An entire 3rd floor was ripped off and thrown. Look close and you can see the metal spiral staircase. No one was hurt here, but one homeowner tells me he woke up to the house shaking. @WKRN 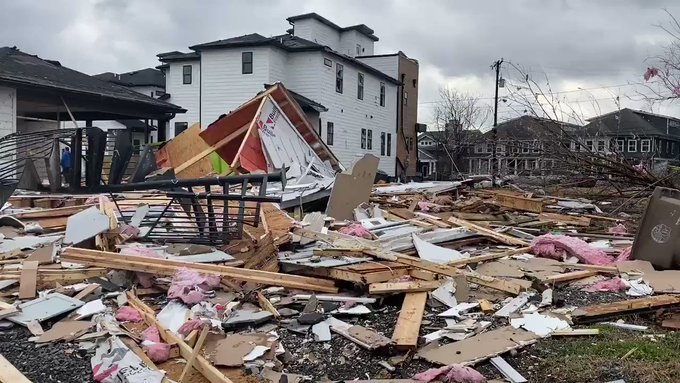 19 people are talking about this

While the „damage is devastating,” residents are already stepping up to help their community, according to Nashville Mayor John Cooper.

He said the website for Nashville volunteer organization Hands On Nashville has crashed three times from so many people trying to sign up to volunteer. More than 5,000 people signed up by Tuesday afternoon, he said.

⁦@Edleysbbq⁩ is one of the most popular BBQ restaurants in #Nashville. It suffered some damage and a truck was thrown down the street, but it is still standing! ⁦@WKRN⁩ 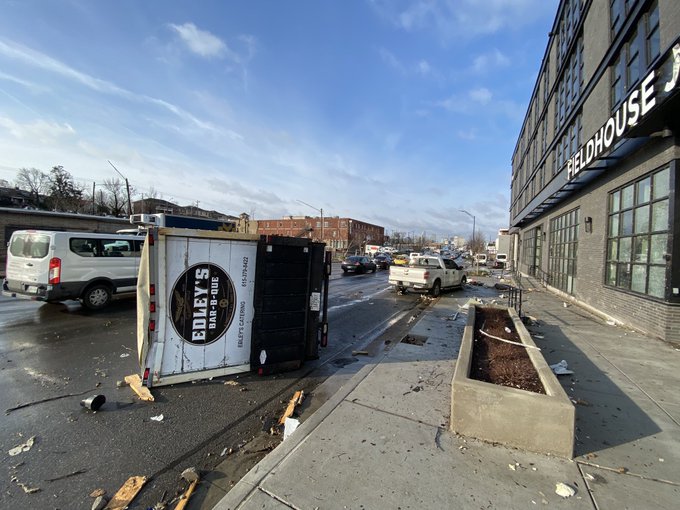 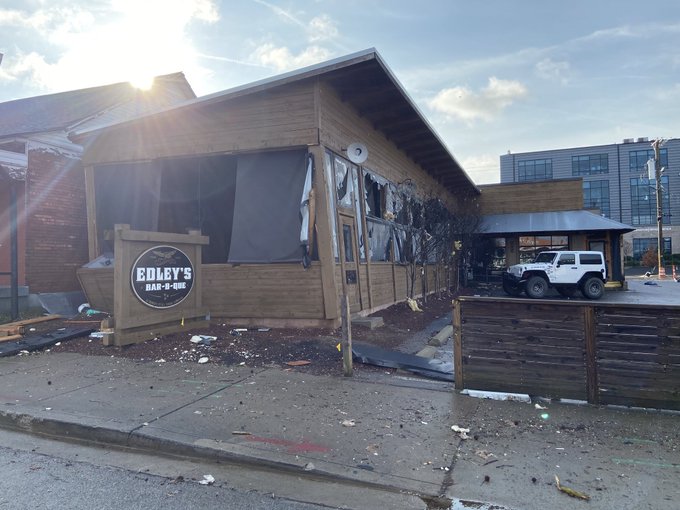 17 people are talking about this

The mayor posted photos of himself assessing the severe damaging at one Nashville elementary school.

MNPS interim director Dr. Adrienne Battle and I are assessing the damage caused by this morning’s horrible tornado at Robert Churchwell. The school district is working on a relocation plan for students, teachers, and staff. I’ll continue to assess other damaged areas today. 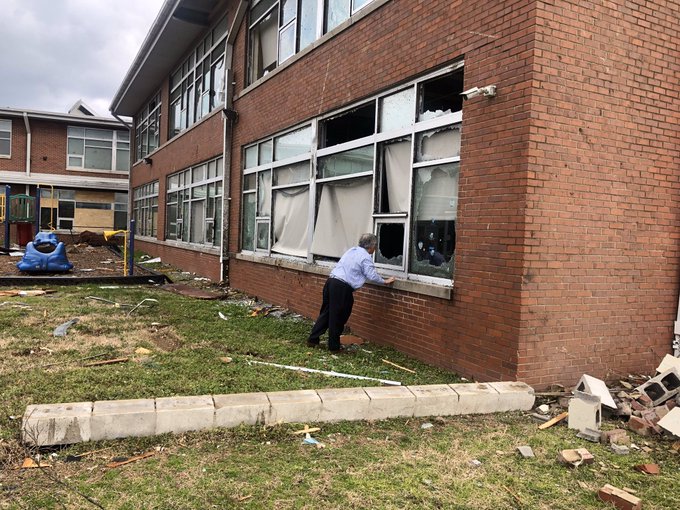 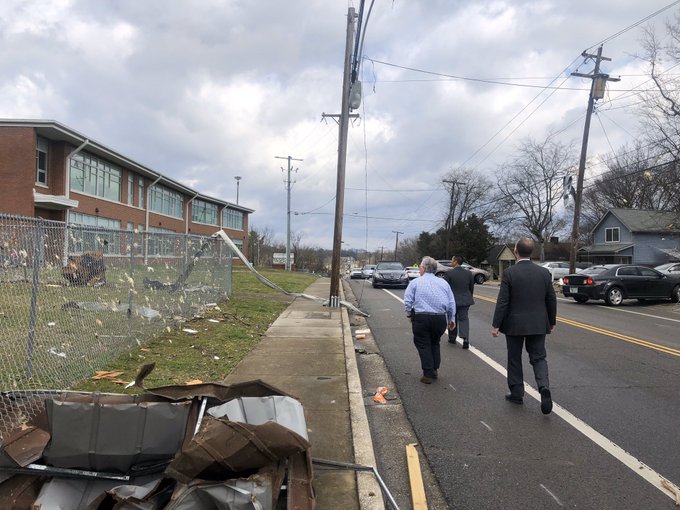 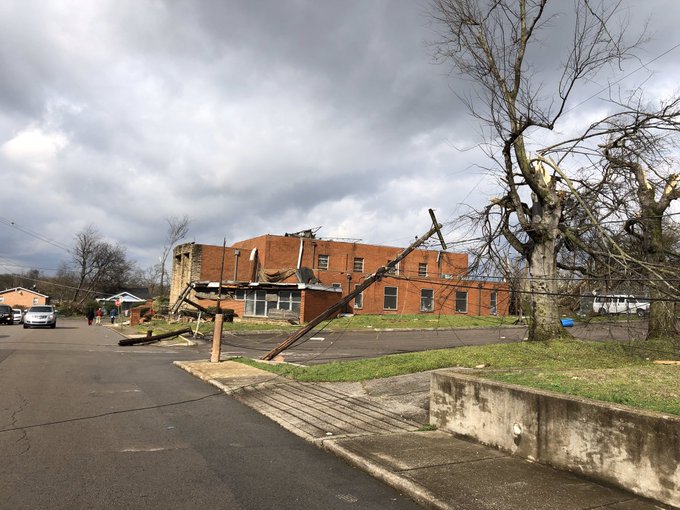 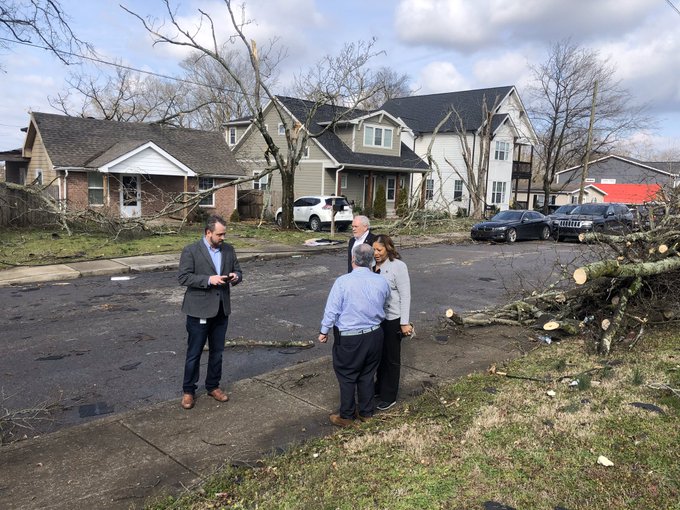 30 people are talking about this

Nashville is the capital of country music and stars have spoken out in the wake of the destruction.

Country music singer Maren Morris tweeted that „the tornado must have missed our block by an inch.”

„I am so depleted looking at the damage that has happened to our beautiful city. There are so many people in the streets helping already, though,” she said. “Thinking of those who lost their loved ones + homes.”

The tornado must have missed our block by an inch because we are alright but I am so depleted looking at the damage that has happened to our beautiful city. There are so many people in the streets helping already, though. Thinking of those who lost their loved ones + homes. 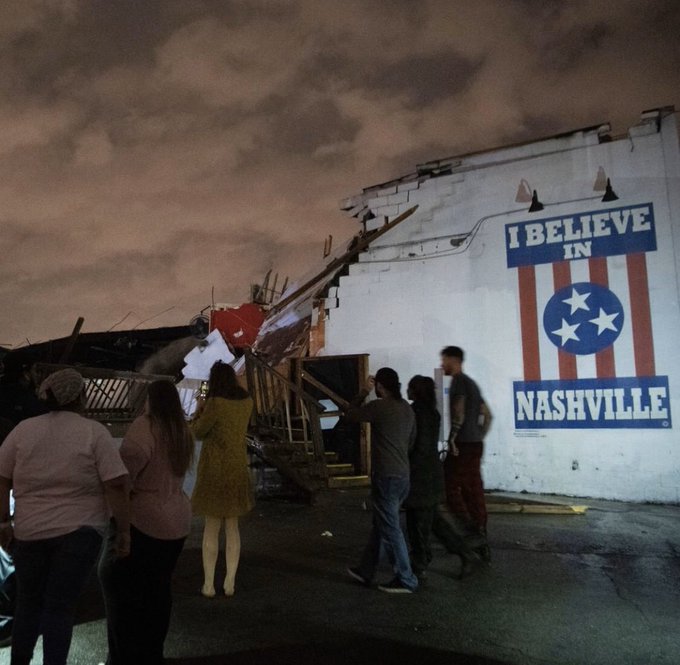 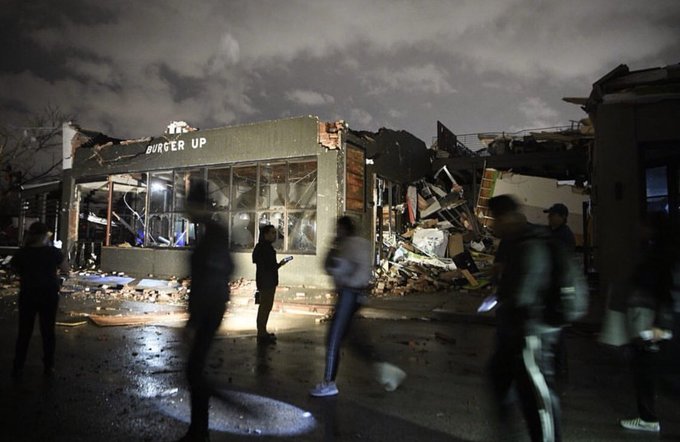 634 people are talking about this

24 dead in Tennessee as tornadoes wreak havoc on towns including Nashville originally appeared on abcnews.go.com