Hua „is right: This is a timeline the world must absolutely scrutinize,” Ortagus tweeted.

Already tense relations between the two powers have worsened over the pandemic, which China has appeared to bring under control but has severely disrupted life in much of the world and infected more than 10,000 people globally.

The United States last week summoned the Chinese ambassador after another foreign ministry spokesman tweeted an unfounded conspiracy theory that the US military brought the virus to Wuhan.

President Donald Trump in turn has angered Beijing by insisting on referring to SARS-CoV-2 as the „Chinese virus,” a terminology discouraged by the World Health Organization.

WASHINGTON — The Army Corps of Engineers is planning to create more than 10,000 ICU-type hospital rooms in hotels, dormitories and other available buildings in New York City over the next few weeks, its commander said Friday.

The corps is racing against the spread of the coronavirus to turn empty buildings in cities across the United States into high-quality COVID-19 treatment centers before the virus reaches its peak in each metropolis, Lt. Gen. Todd Semonite told reporters. To achieve this, he said the corps had come up with “a standard design” to rapidly convert hotels and similar structures into medical facilities.

“We want to use New York as the standard setter,” Semonite said.

Displaying a pamphlet that he said contained the design, Semonite said the concept has already been presented to White House officials and approved by the Department of Health and Human Services and the Federal Emergency Management Agency.

“This is an unbelievably complicated problem, and there’s no way we’re going to be able to do this with a complicated solution,” Semonite said. “We need something super simple.”

He described a four-phase process: First, a state governor would have to nominate the facilities in a prioritized order and set up any required leases. Next, the Corps of Engineers would step in, hire contractors “in an exceptionally short amount of days” and turn it into “an ICU-like facility,” he said.

Key to the modifications would be ensuring that each patient room has negative pressure, so that the virus cannot escape the room. Semonite said most rooms already have a device that allows them to do that, but if the room lacks such a device or the device isn’t working, one can be installed.

Third, the room has to be equipped with the appropriate medical supplies. FEMA and HHS have drawn up a list that would be standard for all rooms, according to Semonite. Nurse stations equipped with wireless technology would be located in the corridors, he said.

Finally, the facility would have to be staffed with medical professionals, a goal that Semonite said was for each state to accomplish.

He said that the concept could be applied to a convention center, but that such buildings weren’t ideal because they didn’t allow for quite the same level of care as hotels and dormitories.

Semonite said he had met earlier in the week with New York Gov. Andrew Cuomo, who was keen to get the process started. “We actually got turned on by the governor and got money from FEMA to go into buildings on Tuesday night,” Semonite said.

He said Corps of Engineers personnel had investigated the Javits Convention Center in Manhattan and some State University of New York school buildings on Thursday. “Today my engineers were walking through 10 other buildings” in New York, he said, adding that half of those were “hotel-like” facilities and others were “open spaces.”

Speed is of the essence, Semonite stressed. “We’ve got to do something very, very quick,” he said. “This has to be weeks, it can’t be months. … We need everybody going full bore.”

Most state governors he had heard from estimated that their COVID-19 cases would peak in the middle of April, Semonite said. For that reason, the Corps and its contractors do not have the luxury of taking “all the time in the world to do it,” he said. Rather, they must focus “the most important things we have to do and come up with a good enough solution.”

The Corps is working with HHS to calculate which “key cities” will see their curves “go exponential,” he said. “We can’t do everywhere, so we’re really asking the federal government to help prioritize our efforts.”

Choosing which cities the Corps goes to first is, according to Semonite, a function of two variables: when the curve of expected new COVID-19 cases is expected to climb most steeply in that city, and how many hospital beds the city already has. But for the changes to happen on time, it is imperative that both the hotel industry and the engineering contractors “step up,” he said.

Those states that don’t want to wait can take the Corps’ design and apply it themselves, Semonite said. “You don’t have to wait on the Corps of Engineers.”

But if time is tight, funding is not. “Right now, money is not a problem at all,” he said. 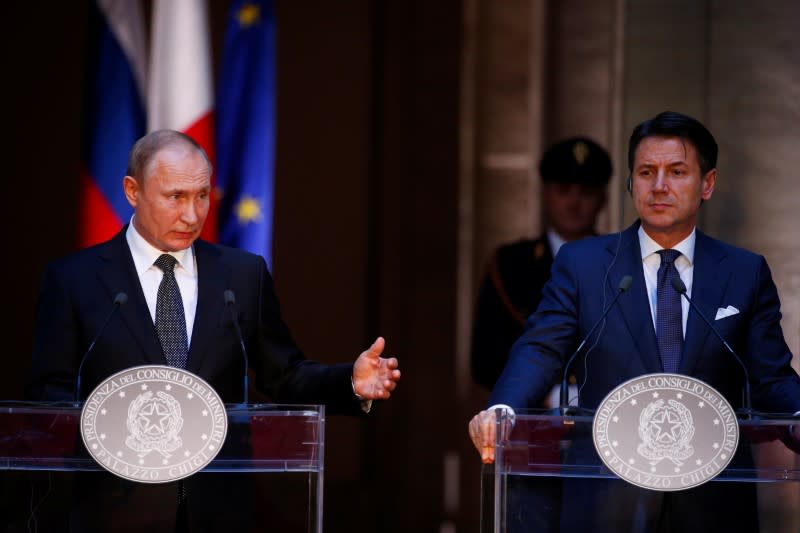 FILE PHOTO: Russian President Vladimir Putin visits Italy MOSCOW (Reuters) – The Russian military will start sending medical help to Italy from Sunday in order to help it battle the new coronavirus after receiving an order from President Vladimir Putin, Russia’s Defense Ministry said in a statement.Putin spoke to Italian Prime Minister Giuseppe Conte on Saturday, the Kremlin said, saying the Russian leader had offered his support and help in the form of mobile disinfection vehicles and specialists to help the worst hit Italian regions.

Italy recorded a jump in deaths from coronavirus of almost 800 on Saturday, taking the toll in the world’s hardest-hit country to almost 5,000.

Russia itself has reported 306 cases of the virus, most of them in Moscow, and one coronavirus-related death.

North Korean leader Kim Jong Un smiles after witnessing the firing of what’s believed to be two short-range ballistic missiles on Saturday. (Photo: KCNA KCNA / Reuters)President Donald Trump wrote a letter to Kim Jong Un offering help dealing with a coronavirus outbreak in North Korea, the state-run Korean Central News Agency reported Sunday.The White House confirmed that the president sent a letter, but would not reveal the contents.But an unnamed senior administration official told The New York Times and Agence France Presse that the letter was “consistent” with Trump’s “efforts to engage global leaders during the ongoing pandemic.”North Korean policy aide Kim Yo Jong, who is Kim’s younger sister, said in a statement carried by the news agency: “We regard it as a good judgment and proper action for the U.S. president to make efforts to keep the good relations he had with our Chairman.”

She said that Trump reaffirmed his intention to promote good relations between the nations, and “expressed his intent to render cooperation in the anti-epidemic work.” The president said he was “impressed by the efforts made by the Chairman to defend his people from the serious threat of the epidemic,” the statement added.

Kim had “mentioned his special personal relations with President Trump again and appreciated the personal letter,” said his sister. But his sister suggested that the leaders’ personal relationship may not be sufficient to promote better ties between the nation.

Talks between the nations have stalled over the past year after a failed summit in Vietnam last February to address the country’s nuclear ambitions. Kim has since pledged to jumpstart the weapons program, saying in January that the North was no longer bound by a moratorium on testing.

On Saturday Kim witnessed the launch of what appeared to be two short-range ballistic missiles from the east coast into the sea.

Pyongang has insisted there have been no coronavirus cases in the nation. But international officials suspect North Korea may be hiding the truth, and fear a major outbreak in a nation with a struggling public health system.

U.S. critics would likely prefer Trump focus on helping the U.S. His administration has come under fire for serious delays rolling out COVID-19 testing and failing to adequately address a critical supply shortage of ventilators for patients and protective gear, including face masks, for health care professionals. 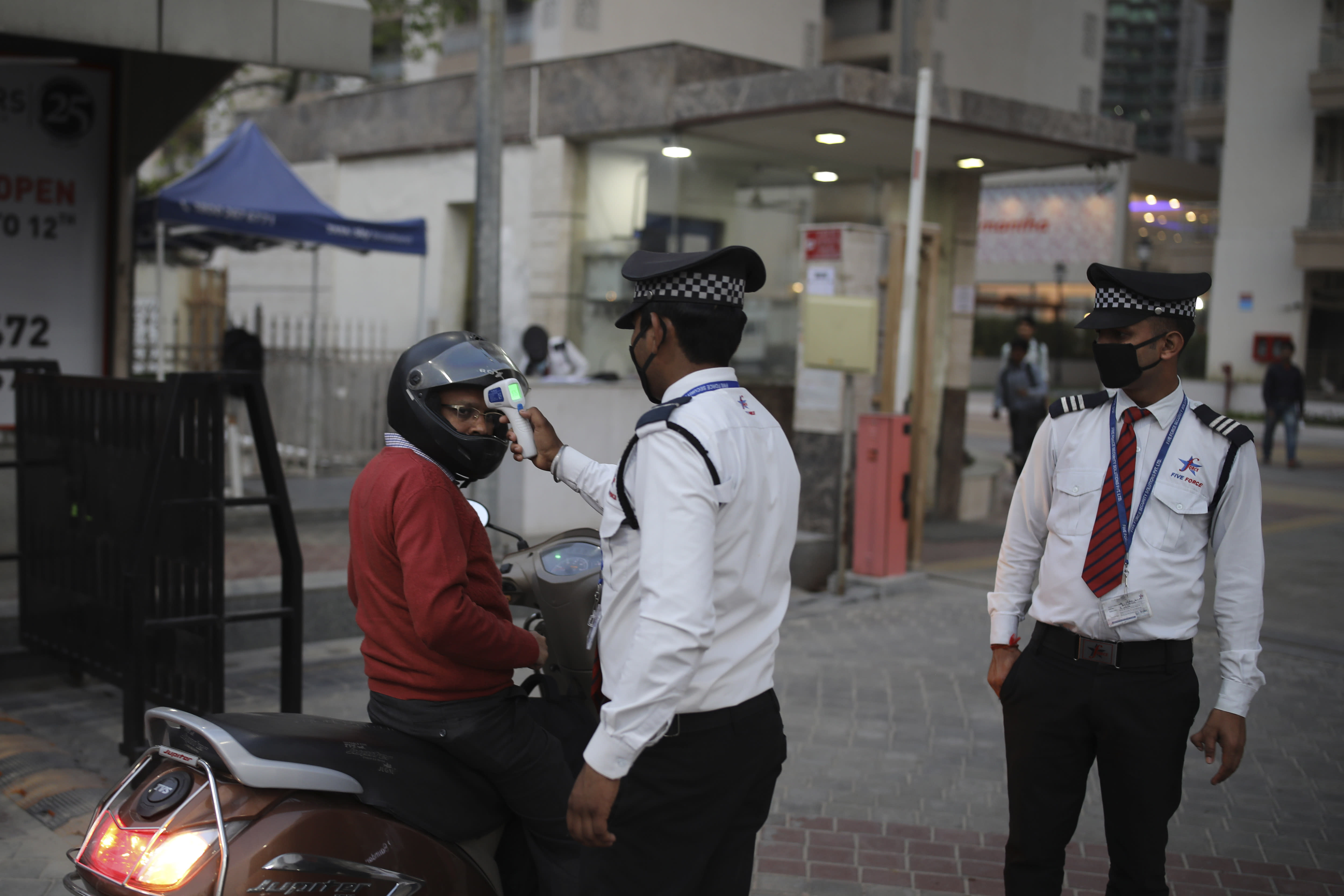 Virus Outbreak India
A private security guard checks the body temperature of a motorist as a precautionary measure against COVID-19 before letting him inside a residential complex in Greater Noida, a suburb of New Delhi, India, Saturday, March 21, 2020. For most people, the new coronavirus causes only mild or moderate symptoms. For some it can cause more severe illness. (AP Photo/Altaf Qadri)NEW DELHI (AP) — The typically boisterous streets of India’s capital fell silent on Sunday as the country observed a 14-hour “people’s curfew” that Prime Minister Narendra Modi called for in a national address to stem the rising coronavirus caseload.In a speech last week, Modi asked Indians to stay at home but go out on their balconies at 5 p.m. with pots and pans to cheer front-line health care workers. Most businesses were expected to be closed on Sunday except for essential services like hospitals.A road in New Delhi near a Sufi shrine where hundreds of pilgrims often camp was empty except for an occasional passing car.While some Indian states had already issued stay-in-place orders, Sunday marked the first nationwide effort at social isolation practices the World Health Organization believes are critical to flattening the infection curve worldwide.No commercial airplanes from abroad are allowed to land in India for a week starting Sunday, and four states sealed their borders to public and tourist buses.India’s Ministry of Health had reported 296 active cases of COVID-19, the respiratory disease caused by the new coronavirus, and four deaths, all linked to overseas travel. Officials said 23 people have recovered from the illness, and have not documented community spread.While the coronavirus can be deadly, particularly for the elderly and people with other health problems, for most people it causes only mild or moderate symptoms, such as fever and cough. Some feel no symptoms at all and the vast majority of people recover.India’s government has made fervent appeals to the public to practice social distancing and good hand hygiene. India also was one of the first countries to essentially shut its borders and deny entry to all but a select few foreigners.However, experts have said indigenous spread of the disease in a country of 1.3 billion people, where tens of millions live in dense urban areas with irregular access to clean water, is inevitable.