Drone leads police to lost hiker in Alaska after wind covers her tracks with snow  by Chaffin Mitchell,AccuWeather•April 5, 2020  In a mission that was similar to „finding a needle in a haystack,” police were able to find a lost hiker using an infrared drone in Alaska.According to police, dispatchers received a call from a hiker who was lost in a snow-covered wooded area.”She was off-trail, and due to the wind, she was no longer able to see her footprints in the snow which she normally could have followed back out,” the Anchorage Police Department said in a Facebook post.

A gusty breeze developed in the later afternoon and evening, with some wind gusts of 20-30 mph recorded in Anchorage, according to AccuWeather Meteorologist Jake Sodja.

„Stronger gusts nearby certainly would have been possible, wind gusts can be enhanced by some of the local terrain wherever this hiker was hiking. The mountains and valleys can funnel the wind and make it locally stronger,” Sodja said.

„Did we mention the wind? Yes, it was cold out to boot. You know what winter wind in Alaska feels like. Due to all of those things, the lady could tell us the general vicinity she was in but that’s about it. Our dispatcher told her to stay put and that we would find her,” the department said.

The Anchorage Police Department sent some officers out on foot while another officer operated a drone. After 15 minutes of flight time, the drone pinpointed the hikers location with its infrared camera. The drone officer was able to tell the woman that help was on the way with the drones loudspeaker.

„She was really happy to hear the mysterious voice in the sky tell her that,” authorities said.

The officer was able to get the hikers coordinates from the drone, which he relayed to the officers who were hiking to find the woman.

The Police Department made sure to mention that all of the searchers were trekking six feet apart due to the coronavirus social distancing rules.

„We got her out safe and sound,” the post said. „Heaven knows we can use as many of those [good stories] as we can get right now.”

How a 2% tornado risk turned into seven twisters that killed 25 people and leveled thousands of buildings  by Jessica Bliss, Nashville Tennessean,USA TODAY•April 5, 2020Deadly tornado storms destroy Nashville area, killing at least 25 At 12:41 a.m. on March 3, a 911 operator answered the call of a panicked man under the Jefferson Street Bridge in Nashville.”Are there current tornadoes on the ground?” he asked.The operator barely had a chance to respond.In the next instant, a forceful wind roared across the phone line.For 33 seconds, there was nothing but the impossibly loud sound of a violent tornado.When it passed, the man on the other end still gripped his phone, but there was silence.”Hello?” the operator asked. Seven seconds passed. „Hello?” the operator said again. Twenty more seconds went by without a word. Then came a meek cry.”Help,” the man said.”Hello, sir, are you OK?””Help,” the man said again, his voice rising as he assessed his surroundings. „I’m at the Jefferson Street Bridge. I’m trapped.”As shock turned to panic, he screamed. In the background, others echoed his cries.”There’s a bunch of people in here,” he said. „I know a lot of people need help.”Similar scenes of terror and uncertainty unfolded across Middle Tennessee in the early hours of March 3 as brutal storms besieged the region, cutting a broad swath of destruction and taking the lives of those who were dearly loved.Twenty-five people died; 310 were injured. Thousands of buildings were destroyed.To many, it felt like Tennessee’s tornadoes came without notice.A tricky forecast, which climaxed in a worst-case scenario, caught everyone off guard. And when the mounting concern by storm-monitoring meteorologists peaked, many residents were already asleep in their beds, unaware of the new watches and warnings being issued across the state. Even with the pending storm’s slight tornado risk noted throughout the day, the reality of the quickly changing environment left mere minutes for people to find shelter.

On Monday morning, the National Weather Service’s Storm Prediction Center in Oklahoma gave Nashville a 2% risk of tornado — the smallest number it will assign.

Still, for this time of year, it was noteworthy.

Tennessee’s tornado season peaks in February, March and April, and in the fall around November.

Since 1995, Tennessee has averaged 30 tornadoes a year.

„This time of year, we know it doesn’t take a lot to produce tornadic storms,” said Grady Dixon, a dean of the College of Science, Technology and Math at Fort Hays State University and a meteorologist who studies tornado climatology.

And that Monday, a cold front was moving toward Tennessee, one with a low pressure system primed to create a supercell — a dangerous, rotating type of thunderstorm.

At 5:50 a.m., the National Weather Service in Nashville noted the growing „strong to severe threat.” But, it tweeted, on a scale of 0 to 5 the risk associated with possible tornadoes in Middle Tennessee that night was a 1.

Yes, just 3 days ago we were advertising lots of rain this week. Not a huge threat anymore. Look for 1-3 inches between today and Thurs. HOWEVER, there is a growing strong to severe threat this evening. Large hail, damaging winds and even a tornado can’t be ruled out. #tnwx 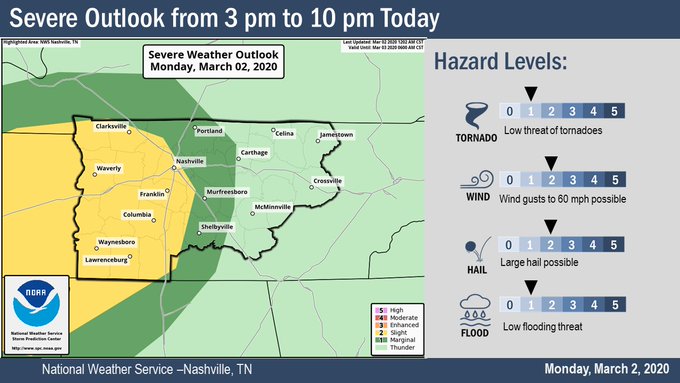 35 people are talking about this

By lunchtime, that risk had increased slightly to 5%.

But the main threat remained large hail and locally damaging winds, with most of the instability concentrated outside the state, around the boot heel of Missouri, Dixon said.

Nashville appeared to be missing some key ingredients for a more significant threat.

Tornadoes begin to form when warm, muggy air at the surface rises and meets colder air above, creating thunderstorms. By itself, that is not enough. There also needs to be rotation. That is caused when winds in the upper atmosphere blow in a different direction than the winds closer to the ground, creating what are called wind shears.

Watch this video to see the process:

In Middle Tennessee that night, the winds about a mile above the earth’s surface — the ones responsible for the wind shears that initiate a rotation — were relatively weak.

And, because it had been overcast in the area during the day, there was not a lot of warm air to rise.

„It looked,” Dixon said, „like it would be one of those near-miss days.”

‘A tiny change in wind’

While most thunderstorms form in a line and feature multiple updrafts — or pockets of rising air — supercells are different. They have only one extremely powerful updraft. As they move, they gobble up the surrounding air, using it as fuel.

The day had been cautioned with only slight concern. But, as night deepened, the winds higher in the atmosphere got unpredictably stronger and the supercell took advantage.

„A tiny change in wind, in this case, made a huge change in outcome,” Dixon said.

Tornadoes are ranked on a scale of 0-5 called the Enhanced Fujita scale:

At 10:15 p.m., a storm chaser captured a photo of a tornado 4 miles east-northeast of Malden, Missouri, about 80 miles west of the Mississippi River.

A radar view of how the storms passed over Middle Tennessee :

It began in Benton County, touching down at 11:05 p.m. and roaring toward the Tennessee River.

It toppled trees as it spun toward Carl Frazee’s mobile home on Bethel Church Road.

When he heard the storm, he ran into the room where his longtime girlfriend, Patricia Kendall, slept on the couch. He threw his body on top of hers.

In a flash, the storm picked them up and tossed them across the road — about 150 yards away from where their trailer sat.

Frazee was dead. Kendall went to the hospital, gashes on her head.

The tornado continued across the Tennessee River into Humphreys County and damaged hundreds of trees along the river on Crystal Springs Road.

It dissipated around Highway 13. But there was much more to come.

‘That’s a lot harder to predict’

In Tennessee, as seasons change from winter to spring, warm, humid air from the Gulf of Mexico begins to edge toward the state, creating a seesaw of moist and dry days.

At the same time, temperatures fluctuate more. Air near the earth’s surface may start to warm, while several thousand feet up it remains cool. These disparities of temperature are often the necessary ingredients to create a tornado.

But this storm was a little bit different.

„It was driven almost entirely by a low pressure center getting stronger in response to a cluster of thunderstorms,” Dixon said.

A low pressure area usually begins to form as air from two different regions collides and is forced upward, cooling as it rises. The rising air creates a giant vacuum effect, and moisture within the air condenses to form clouds and rain.

As the air rises, other air must rush in from the sides to replace it. The faster it goes, the more intense the exchange becomes. This sometimes creates strong winds, but not always.

„Trying to monitor winds flowing into a low pressure area — and whether they are going to get stronger or weaker — that’s a lot harder to predict,” Dixon said.

But first would come a stop in Humphreys County. 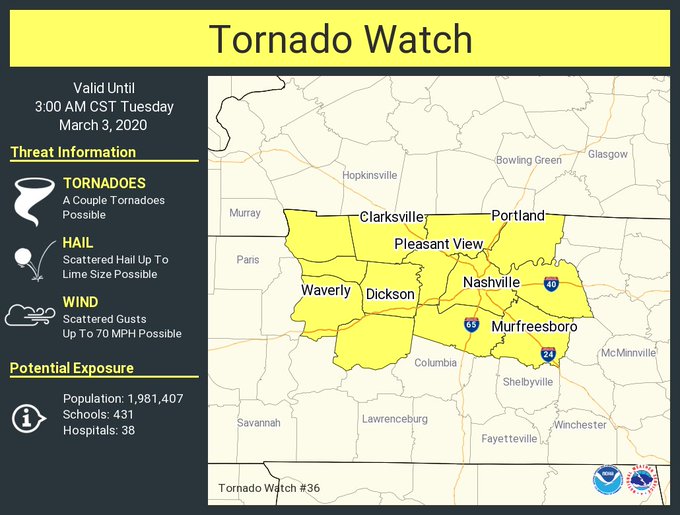 34 people are talking about this

It touched down along Curtis Chapel Road, damaged a small barn, uprooted a few trees and then disappeared.

According to the National Centers for Environmental Information, approximately 77% of tornadoes in the United States are considered weak (EF0 or EF1) and about 95% of all tornadoes nationwide are EF2 intensity or below.

Perhaps that is why no one panicked as the supercell continued eastward across the state, with intermittent tornado warnings accompanying the storm.

That’s not to say that no one was watching.

These storms often „cycle,” meaning they look tornadoey for a few minutes, then not so much, then tornadoey again. I don’t want to act like this is a definite tornado, but we can never be sure with supercells like this. Respect every warning. Radar loop: 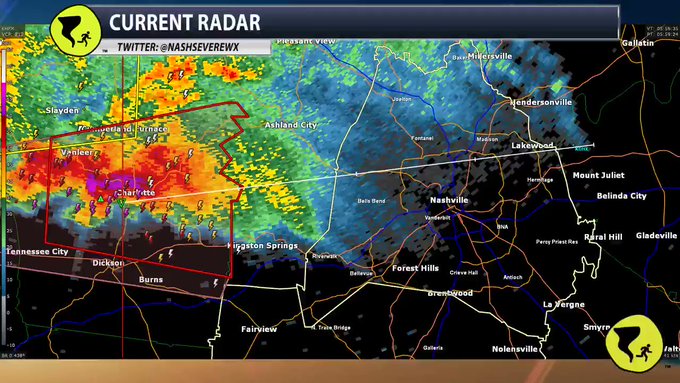 See NashSevereWx’s other Tweets
At 12:11 a.m., a severe thunderstorm warning was issued for areas including Nashville and Hendersonville, warning of possible 60 mph wind gusts.At 12:31 a.m., the National Weather Service in Nashville tweeted a „heads up” to Metro Nashville that the storm was moving into northern Davidson County.”The storm is not as strong currently, but is still capable of producing hail to the size of golf balls,” it said.Four minutes later, the National Weather Service issued a tornado warning for Davidson, Sumner and Wilson counties, and a twister touched down directly over the John C. Tune Airport, tossing airplanes around like toys.The terminal and 17 airplane hangars were destroyed. The airport was hit without a warning.

Damage to airplanes, hangars and facilities all around the field left in the wake of a tornado can be seen at John C. Tune Airport in Nashville on Friday, March 6, 2020.