A rare tornado warning was issued and hail was reported in parts of New York City, as the East Coast braced for damaging winds and strong to severe thunderstorms ahead of a cold front pushing across the eastern US.

A tornado warning was initially issued in parts of Manhattan, the first time the city had seen an April tornado warning in nearly a decade. The warning did not impact a central area of the city where a coronavirus patient field hospital has been established.

The warning was cancelled shortly after it was issued, but strong winds persisted through the afternoon.

Hail was reported throughout the city’s boroughs, while massive, sinister cloud formations and water spouts were spotted off the New Jersey coastline.

The last tornado to hit New York City was in August 2018, when an 85 mph tornado roared through Queens and knocked down several trees and power lines.

Colder air is expected to hit the East Coast late on Tuesday and into Wednesday.

Damaging winds and flash floods are predicted for much of the southeastern US from Wednesday through Thursday.

See live updates as they happened

Please allow a moment for the liveblog to load

At first glance, you might not spot the link between your weather forecast and the coronavirus. But due to a dramatic drop in airplane flights worldwide, the computer models that provide the basis for your daily weather forecast are missing some critical data about our atmosphere.

Some 250 million measurements are taken by aircraft each year, according to NOAA, extending to air pressure, temperature, wind speed and direction, and humidity. This data then makes its way into the models.

While meteorologists release radiosondes — more commonly referred to as ‘weather balloons’ — into the atmosphere in 900 locations daily, both commercial and non-commercial aircraft flights act like thousands more. With so many flights taking different paths across the country, it exponentially increases the amount of data that makes its way into the weather model, and in theory, improves weather forecasting.

But there’s a big problem. The coronavirus pandemic devastated the airline industry worldwide. As of April 20, scheduled flights are down a staggering 66% according to global travel data provider OAG.

The ECMWF — the group behind the “European” weather model — noted this significant decrease in a tweet on April 2. An earlier study by the group found that accuracy could drop by as much as 15% without aircraft data.

The COVID-19 pandemic has had a severe impact on the amount of aircraft observations available to weather prediction models. Daily totals over Europe have decreased by around 80% (from around 50 000 per day down to 10 000) since flight restrictions came into force. @WMO 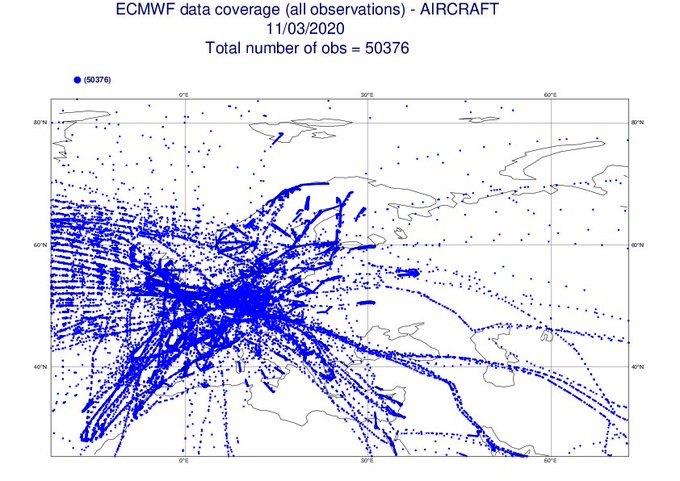 184 people are talking about this

The sudden drop in data also caught the attention of the World Meteorological Organization, which sounded the alarm earlier this year over the potential effects on weather forecasting.

“The COVID-19 pandemic poses an additional challenge and may exacerbate multi-hazard risks at a single country level. Therefore it is essential that governments pay attention to their national early warning and weather observing capacities despite the COVID-19 crisis,” WMO Secretary-General Petteri Taalas said.

Taalas and the WMO pointed not only to the reduction in aircraft data, but also the loss in data from ground-based observations. While countries like the U.S. have large-scale automated observation networks, many developing countries do not, and weather observations are made by meteorologists the old fashioned way. The WMO said it observed a significant decrease in these types of observations, but it’s unclear if COVID-19 is to blame.

Whether or not there’s been a significant decrease in model accuracy (what meteorologists call “skill”) is still up for debate. NOAA spokesperson Lauren Gaches said that it’s difficult to quantify the impact due to the exact nature of the decrease in flights. While commercial flight data has dropped precipitously, cargo and package flights have generally continued.

“Even though a decrease in this critical data will possibly negatively impact forecast model skill, it does not necessarily translate into a reduction in forecast accuracy since National Weather Service meteorologists use an entire suite of observations and guidance to produce an actual forecast,” Gaches said.

She noted that the U.S.-based GFS model now incorporates additional aircraft data from international and regional domestic air carriers. Other sources of data, including satellite data, is also used to provide weather models with accurate portrayals of the current state of the atmosphere.

As such, it might be a while before we know if our new normal might also include less accurate weather prediction. But the data seems to suggest that the longer the pandemic lasts, and as air traffic decreases more and more, the weatherman could be wrong more often.