Severe storms, tornadoes and ‘massive’ hail forecast for 42 million people across southern Plains by Doyle Rice, USA TODAY,USA TODAY•April 29, 2020A major outbreak of severe weather is forecast across the southern Plains into early Wednesday, with portions of Texas, Oklahoma and Arkansas at the greatest risk for the fierce storms.Massive hail, hurricane-force winds and a few tornadoes are all possible, forecasters at the Storm Prediction Center said, warning that a „damaging squall line is expected.”During Tuesday, thunderstorms will extend along an approximately 1,100-mile swath from northern Illinois to central Texas, AccuWeather warned.

The tornado threat is greatest across eastern Oklahoma and far western Arkansas. A tornado watch has been issued for portions of Arkansas, Kansas, Missouri and Oklahoma until 11 p.m. CDT, the National Weather Service said.

Along with the tornado risk, forecasters warned that baseball-sized hail and wind gusts of 75 mph or greater are possible.

Spring weather forecast: When can we say ‘farewell’ to winter?

In addition, there is a risk of excessive rainfall, the National Weather Service said. Some of the storms could produce 2 inches of rain in just 45 minutes.

According to the Storm Prediction Center, some 42 million people live where severe weather is possible on Tuesday. This includes the Dallas-Fort Worth, Oklahoma City and Tulsa metro areas.

On Wednesday, the threat for strong to severe storms shifts to the Southeast, particularly in parts of Alabama and Georgia, Weather.com said: „Localized damaging wind gusts and large hail would be the main threats from any storms that do intensify, but a couple of tornadoes cannot be ruled out.”

According to AccuWeather, 2020 continues on a trend to be among the nation’s top years for tornadoes. So far this year, through April 26, 492 tornadoes have been reported across the nation, far above the to-date average of 307.

There have been 73 fatalities in 2020, as of mid-April, AccuWeather said. 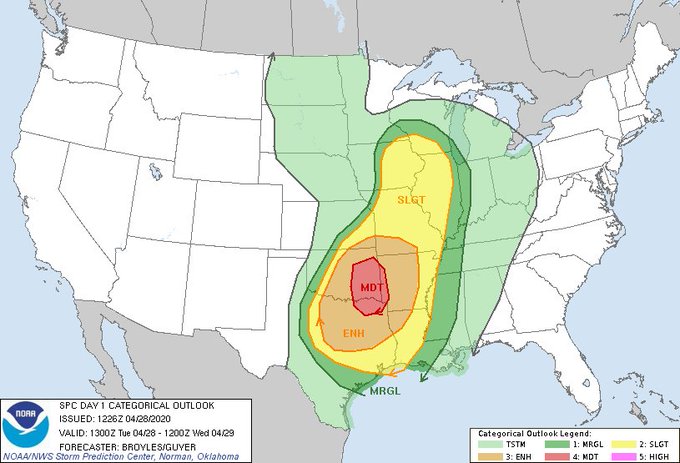 Damaging storms are endangering lives and property across a 1,000-mile swatch of the central United States as another severe weather outbreak erupts over the region.

All modes of severe weather will be possible into Wednesday morning from Texas to Missouri, including wind gusts over to 70 mph, hail larger than golf balls and isolated tornadoes. This includes Dallas and Little Rock, Arkansas. The threat for severe weather has ended for places such as Oklahoma City and St. Louis.

The first tornado watch of the day was issued at 3:15 p.m. CDT, highlighting not only the risk for tornadoes, but also very large hail and intense wind gusts over part of the south-central U.S.

Tornado sirens blared in Tulsa, Oklahoma on Tuesday night while the storm unleashed blinding downpours and large hail across the region. Over 6,100 power outages have been reported in Oklahoma in the wake of the storms, according to PowerOutage.us.

Behind the severe weather, Mother Nature put on a spectacular display of mammatus clouds. 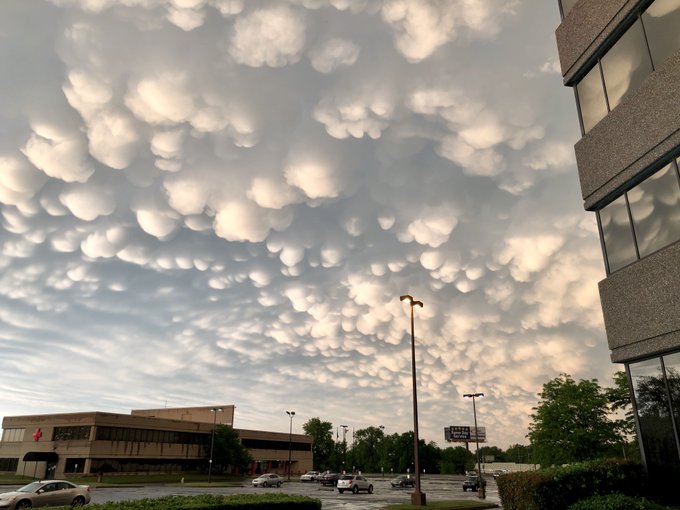 15 people are talking about this

Hail as large as tennis balls pounded Yukon, Oklahoma, just northwest of Oklahoma City, as a severe thunderstorm moved over the region. Hail this large is able to dent vehicles and possibly crack windows. Smaller hail was reported near downtown Oklahoma City, but the worst of the storm missed the center of the city.

Farther east, a severe storm capable of spinning up a tornado tracked near Greenfield, Missouri.

The thunderstorms have congealed into a massive line of damaging, straight-line, wind-producing thunderstorms from Texas to Missouri. Isolated tornadoes could spin up at times within this line of storms.

The focus of the storms will shift east heading on Wednesday, rumbling across much of the Southeast. Similar to Tuesday’s storms, damaging storms will have the potential to spawn tornadoes, large hail and damaging winds.

As of Sunday, there have been 492 tornadoes reported across the U.S., well above the average of 307. At this rate, 2020 is on pace to rank as one of the top years in terms of number of tornadoes.

A 78-mph wind gust was measured one mile south of Plano, Texas. This same line of thunderstorms is now charging toward the Dallas-Fort Worth Metroplex, with a severe thunderstorm warning in effect for the area.

Tornado sirens are blaring across the northern suburbs of Little Rock, Arkansas, including at the Little Rock Air Force Base. National Weather Service meteorologists say that a thunderstorm capable of producing a tornado is sweeping through northwestern Lonoke, southeastern Faulkner and northeastern Pulaski counties. The warning remains in effect until 11:30 p.m. CDT.

Behind the severe storms in Oklahoma, Mother Nature put on an amazing display of mammatus clouds. These unique, pouch-shaped type of clouds typically only appear on the underside of a severe thunderstorm. The setting sun added to the beauty of these clouds in Oklahoma on Tuesday evening.

Tornado damage has been reported in Hammond, Louisiana. There are no injuries at this time.

A 64 mph wind gust was reported at the Springfield Branson Airport in Missouri. Reports also say a tree fell on a house in Aurora, Missouri, while downed trees were reported in Battlefield, Missouri.

Tornado sirens blared in Tulsa, Oklahoma, as a severe storm capable of spinning up a twister passed through the area. It is still unclear if a tornado touched down in the area, but the storm also unleashed blinding downpours and hail across the region. An ominous shelf cloud preceded the storm, glowing green with lightning sporadically flashing in the clouds. Over 2,500 power outages have been reported in Tulsa County in the wake of the storm, according to PowerOutage.us.

Farther east, a severe storm capable of spinning up a tornado is near Greenfield, Missouri. This is part of a line of storms that is approaching Springfield, Missouri, which could pack winds over 60 mph and frequent lightning.

Hail as large as tennis balls have pounded Yukon, Oklahoma, just northwest of Oklahoma City, as a severe thunderstorm moved over the region. Hail this large is able to dent vehicles and possibly crack windows. Smaller hail was reported near downtown Oklahoma City, but the worst of the storm missed the center of the city.

AccuWeather’s Blake Naftel has been tracking a severe thunderstorm near Benson, Illinois, that has produced blinding downpours, penny-sized hail and at one point a wall cloud, but no tornado has been spotted.

Severe thunderstorms have developed from Oklahoma to Illinois, many of which producing small hail. Marshall, Oklahoma, has been pelted by the largest hail of the day so far with tennis ball-sized hailstones.

A tornado watch has been issued for portions of Oklahoma, Kansas, Arkansas and Missouri until 11 p.m. CDT Tuesday. This is the first tornado watch issued today, with more possible heading into Tuesday night. In addition to tornadoes, very large hail and damaging winds are also possible in this area. Some hailstones could measure larger than baseballs, according to the Storm Prediction Center.

A severe thunderstorm with a history of producing a funnel cloud is southwest of Houston. Heavy rain from this slow-moving storm can also lead to flash flooding in the area.