Donald Trump storms out of press conference by AP Reporters,PA Media: World News•May 12, 2020 President Donald Trump abruptly ended his White House news conference on Monday after combative exchanges with two reporters.Weijia Jiang of CBS asked Mr Trump why he was placing so much emphasis on the amount of coronavirus tests that have been conducted in the United States.“Why does that matter?” Ms Jiang asked.“Why is this a global competition to you if everyday Americans are still losing their lives and we’re still seeing more cases every day?”Mr Trump replied that “they’re losing their lives everywhere in the world. And maybe that’s a question you should ask China. Don’t ask me. Ask China that question.”He called for another question, and there was no immediate response.“Sir, why are you saying that to me, specifically?” Ms Jiang asked.Ms Jiang, who has worked for CBS News since 2015, was born in Xiamen, China, and emigrated to the United States with her family aged two.Mr Trump said he would say that to “anyone who asks a nasty question”.

“It’s not a nasty question,” Ms Jiang said. “Why does that matter?”

Mr Trump again asked for another question, then said, “Nah, that’s OK” and waved off CNN’s Kaitlin Collins when she approached the microphone.

“You pointed to me,” Ms Collins said.

The president said: “I pointed to you and you didn’t respond.”

Ms Collins said she was giving Jiang the time to finish her questioning, and added: “Can I ask a question?”

With that, Mr Trump called an end to the news conference, held in the White House Rose Garden, and walked away from his lectern.

Ms Jiang and Ms Collins wore masks to the news conference, as did most reporters, following the recent news two White House employees — an aide to Vice President Mike Pence and a valet to the president — had tested positive for the coronavirus.

The number of tests completed per day has doubled over the past three weeks. 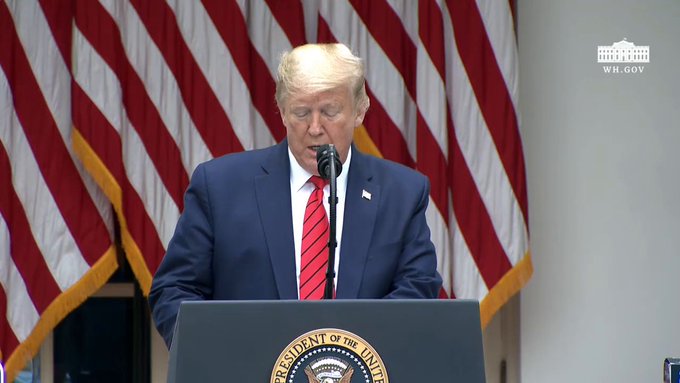 7,860 people are talking about this

The exchanges came after Mr Trump insisted his administration had “met the moment” and “prevailed” on coronavirus testing, even as the White House itself became a symbol of the risk facing Americans by belatedly ordering everyone who enters the West Wing to wear a mask.

Mr Trump addressed a Rose Garden audience filled with mask-wearing administration officials, some appearing publicly with face coverings for the first time during the pandemic.

The startling sight served only to further highlight the challenge the president faces in instilling confidence in a nation still reeling from the pandemic.

Mr Trump himself, not wearing a mask, sought to emphasise to the American people the steps being taken to ensure their safety — in hope that will coax them to resume normal activities.

A shortage of coronavirus testing has long been a sore spot for the president, but he insisted anew that everyone who wanted a test could have one.

The pledge, first issued by Mr Trump more than two months ago, comes as governors across the country continue to call on the federal government to do more to boost supply to meet the requirements needed to begin “reopening” the nation.

The upbeat message was undercut by the new protective measures implemented to keep Mr Trump safe, evidenced by the absence of Mr Pence and three of the nation’s top medical experts, who were in various states of isolation after the cases of Covid-19 were confirmed among staffers in one of the most-protected complexes in America.

Yahoo News•May 12, 2020Trump expresses sympathy over death of Ahmaud Arbery, then raises questions about video
DONALD TRUMP: As
far as the incident,

President Trump said Monday that a video showing two white men in Georgia gunning down and killing an African-American jogger is “heartbreaking,” though he left open the possibility that “an empty spot on the tape” might reveal more information in the case.

Trump was asked about the video that shows the shooting of Ahmaud Arbery as he jogged along a tree-lined street in Brunswick, Ga. The question came near the end of a Rose Garden briefing on the coronavirus pandemic.

“I think it’s horrible and it’s certainly being looked at by many people. I’m speaking to many people about it,” Trump said of the video that surfaced on social media two months after the Feb. 23 shooting. A swift public outcry erupted and was followed by the arrest of Travis McMichael, 34, on a charge of felony murder and aggravated assault, and his father, Gregory, 64, who is charged as a party to felony murder and aggravated assault.

Trump praised Arbery’s appearance in a photograph released by his family that showed him wearing a tuxedo.

The video was believed to be in the possession of authorities before it was released anonymously online, but neither McMichael had been charged. In questioning at the time, they told investigators they were attempting a citizens arrest of Arbery, who was 25, suspecting him of a burglary. In the account by the McMichaels, according to the Brunswick News, Arbery, who was unarmed, was struggling with Travis McMichael, who had a shotgun.

Protests have erupted over the killing as well as the investigation. Atlanta Mayor Keisha Lance Bottoms said Sunday that “this was a lynching of an African-American man.”

Trump said Tuesday that he hoped for a speedy resolution in the case.

“You have a lot of people looking at it and hopefully an answer is going to be arrived at very quickly. But it’s something that is heartbreaking,” Trump said.

The president also repeated his earlier assertion that the video, which was shot by a motorist, might contain “an empty spot on the tape” that could affect the case.

“Well, I saw the tape and when they moved left, I don’t believe that when they moved left outside of the tape nobody saw what was going on. Nobody saw — it’s an empty spot on the tape, I guess,” Trump said. “Now, do they have additional tapes, I hope, but I will say that it’s something that based on what I saw, doesn’t look good.”

Trump added that he he had spoken over the weekend to Sen. Tim Scott, R-S.C., an African-American who he had “a lot of respect for” to ask him his opinion of the video.

“Tim, what do you think, tell me,” the president said, reprising his conversation with Scott.

Trump said Scott was “very disturbed by it.”

Click here for the latest coronavirus news and updates. According to experts, people over 60 and those who are immunocompromised continue to be the most at risk. If you have questions, please refer to the CDC’s and WHO’s resource guides.

‘We have prevailed,’ Trump declares, as coronavirus death toll tops 80,000

Alexander Nazaryan National Correspondent,Yahoo News•May 12, 2020White House tries to clarify who should be tested for coronavirus 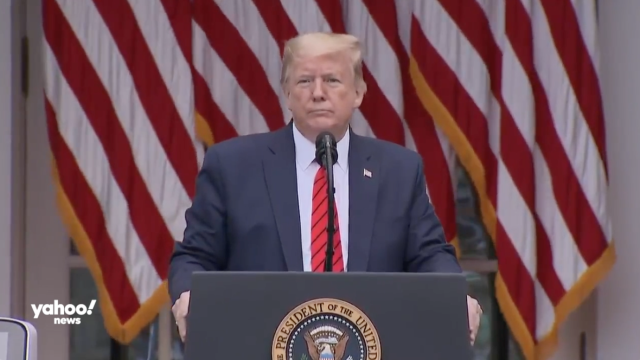 WASHINGTON — President Trump on Monday sought to justify his administration’s handling of the coronavirus pandemic, as his task force unveiled a distribution of $11 billion to states to help them speed testing of the general population.

That new infusion, the president said, would ensure that the United States “continues to conduct more tests than any country on Earth, by far.” He continued to favorably compare testing capacity within the United States to that of South Korea, which has been widely praised for its coronavirus response.

Even as he promised more testing to come, Trump said that all Americans already had access to a coronavirus diagnostic test. “If somebody wants to be tested right now, they’ll be able to be tested,” he said, reprising an assurance he made when touring the Centers for Disease Control and Prevention headquarters in Atlanta two months ago.

“Anybody that wants a test can get a test,” he said at the time.

The president spoke on Monday from the Rose Garden. Testing equipment displayed on tables on either side of the podium were meant to serve as evidence of what he called “the largest manufacturing ramp-up since the Second World War.”

The United States has drastically increased its testing capacity since February, and about 9 million Americans have so far been tested for the coronavirus, which causes a lung disease called COVID-19. Still, shortages in coronavirus tests and test-related equipment continue to be reported across the country.

But having described himself as the nation’s cheerleader in chief, Trump has generally brushed aside such concerns as political attacks meant to harm his reelection prospects. And even as the CDC reports between 20,000 and 30,000 daily new coronavirus cases, the president has moved to swiftly declare victory.

“We have met the moment, and we have prevailed,” Trump said at one point during the Monday briefing, which quickly evoked comparisons to George W. Bush’s “mission accomplished” speech in 2003. Bush’s declaration was followed by a deadly insurgency that took thousands of American lives.

The sense of victory was not immediately apparent on an unseasonably cold Washington afternoon. In recent days, the coronavirus has descended upon the White House, with one of the president’s own valets testing positive for the disease. Katie Miller, a spokesperson for Vice President Mike Pence, has also tested positive for the coronavirus.

On Monday, the White House issued guidance that everyone within the complex had to wear a protective face mask. And yet Trump himself has chosen not to wear one.

“In the case of me, I am not close to anybody,” the president said. “I’m very far away from everyone,” he added. He then pointed to White House staffers standing along the West Wing colonnade, all covered in face masks.

Trump has advocated for the country to begin to reopen, and though that decision ultimately rests with state governors, the bully pulpit of the presidency can be difficult to ignore. Last month, the president tweeted in support of armed protesters who called on Democratic governors to lift lockdown measures.

He harkened back to that argument on Monday, albeit in more measured tones, charged that Democratic governors were making “no effort” to “get back into gear. And the people aren’t gonna stand for it.” But with increased coronavirus-related measures at the White House, the argument lacked the force it previously had.

Trump made similar claims in early February, when he promised that the coronavirus would not inflict significant damage on the nation. It has killed 80,000 Americans, and is expected to kill many more.

Trump could not explain why Vice President Pence has not chosen to undergo a strict quarantine after coming into contact with Miller, as public health guidelines would seem to mandate he do. Several of the nation’s top public health officials have taken that very precaution.

“He will give you that information,” Trump said of Pence.

As the president himself acknowledged, White House officials have recourse to daily coronavirus testing, whereas most members of the public do not. One reporter went so far as to call that a “double standard,” an assertion that clearly displeased Trump. “You know what?,” he answered, “if we didn’t get the tests, if we did no tests in the White House, you’d be up complaining, ‘Why aren’t you getting tests for the White House?’ See, we can’t win.”

Adm. Brett Giroir, a top Department of Health and Human Services official who has been put in charge of testing by the White House, said at Monday’s press conference that “everybody who needs a test can get a test.” He then went on to explain that the people in that category were those showing symptoms of “respiratory illness” and those who have had a known contact with someone who has tested positive for coronavirus.

That seemed to be a significant qualification to Trump’s assertion that anyone who wants a test could get one.