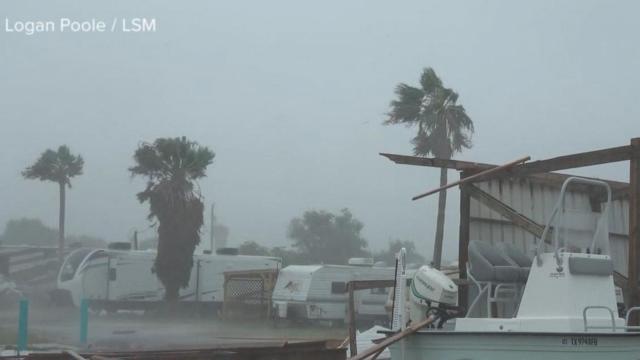 The Category 1 hurricane was moving west at about 8 mph when it made landfall at Padre Island, about 15 miles north of Port Mansfield, around 5 p.m. local time on Saturday.

Very heavy rain, strong winds and storm surge impacted the south Texas coast, the worst of it south of Corpus Christi, down to the mouth of the Rio Grande River.

While wind and storm surge were notable along the coast during the afternoon, very heavy rain and the potential for widespread flash flooding across the Rio Grande Valley was the biggest concern into Saturday night. Rainfall totals over extreme southern Texas to the Mexico border could lead to dangerous flash flooding.

„Any hurricane is an enormous challenge, this challenge is complicated and made even more severe seeing it is sweeping through an area that is the most challenged area in the state for COVID-19,” said Texas Gov. Greg Abbott. „We cannot allow this hurricane to lead to a more deadly event by stoking COVID-19 leading to more fatalities.”

Abbot said disaster declarations have been made in 32 counties.

The National Weather Service in Brownsville reported „significant structural damage” in nearby Port Mansfield and a gust up to 83 mph.

As is usually the case with land-falling tropical systems, isolated tornadoes are possible along the southern Texas coast through Saturday evening.

Hanna will begin to rapidly weaken Saturday tonight and Sunday morning as it moves into northern Mexico. However, it will continue to bring widespread heavy rain and the threat of dangerous flash flooding across the Rio Grande Valley even as the wind speeds go down.

An excessive amount of rain is forecast for extreme southern Texas, south of Corpus Christi, including Port Mansfield, Brownsville and down along parts of the Rio Grande Valley. Rainfall totals of 6 to 12 inches are expected which could produce widespread flash flooding.

Isolated rain totals of over a foot are possible into early Sunday as Hanna begins to moves into northern Mexico.

Meanwhile near Hawaii, Hurricane Douglas weakened to a Category 1 hurricane with sustained winds down to 90 mph Saturday afternoon local time. It was moving west-northwest at 16 mph and was about 300 miles east of the Big lsland at 4 p.m.

The weakening trend will continue as it closes in on Hawaii and Douglas will pass near the islands on Sunday. It will likely pass close enough for heavy rain, strong winds and rough surf to impact parts of the state. However, a slight shift in the track could change impacts either way.

A Pentagon UFO unit will make some investigations public as ex-advisors suggest that “vehicles not made on this earth” were placed in US government storage.

The team will update the US Senate’s Intelligence Committee on its unidentified flying object (UFO) research every six months, The New York Times reported on Thursday.

Publicly named in 2019 as the Unidentified Aerial Phenomenon Task Force, the Pentagon unit succeeded an investigative UFO program that was said to have been disbanded prior to 2017.

One former official, Eric Davis, told The Times that he briefed the US Department of Defense in March about the retrieval of “off-world vehicles not made on this earth”.

The Pentagon consultant and subcontractor said objects he believed “we couldn’t make…ourselves” were discovered during his time on the unit, where he has worked since 2007.

Whilst no crash artefacts have ever been documented in public, Harry Reid – the former Democratic Senate majority leader – told The Times that he “came to the conclusion” that UFO materials were in the government’s possession.

“After looking into this, I came to the conclusion that there were reports — some were substantive, some not so substantive — that there were actual materials that the government and the private sector had in their possession,” said the former senator for Nevada.

It is not known what details the Pentagon unit will provide to the Senate, whilst acting intelligence committee chairman Marco Rubio said last week that his priority was to uncover who was behind unidentified flying vehicles seen over American military bases.

“We have things flying over our military bases and places where we are conducting military exercises and we don’t know what it is — and it isn’t ours,” said senator Rubio to CBS Miami.

“Frankly, that if it’s something from outside this planet — that might actually be better than the fact that we’ve seen some technological leap on behalf of the Chinese or the Russians or some other adversary,” added Mr Rubio.

The Senate committee mandated the Pentagon unit to “standardise collection and reporting on unidentified aerial phenomenon” as part of 2021 spending plans on intelligence agencies.