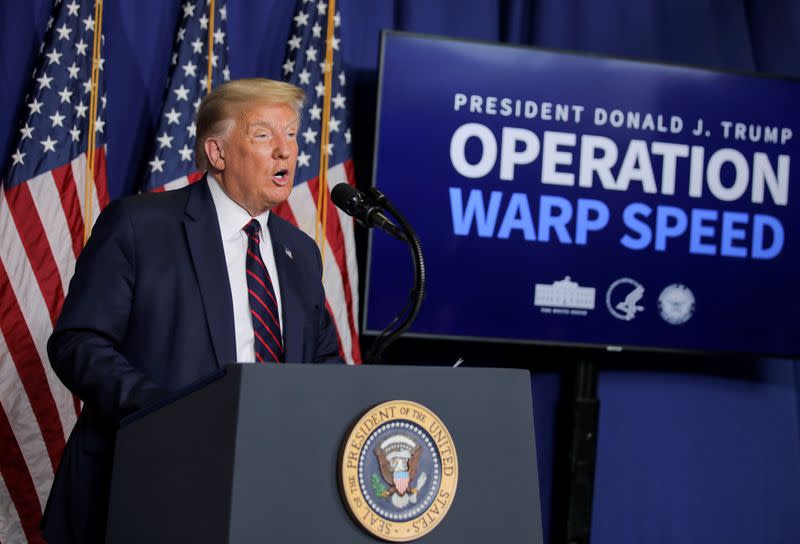 FILE PHOTO: U.S. President Trump visits Fujifilm Diosynth Biotechnologies’ Innovation Center in Morrrisville, North Carolina By Lawrence Hurley and Jan Wolfe WASHINGTON (Reuters) – A U.S. appeals court on Friday dealt the administration of President Donald Trump a major legal setback, ruling against its bid to block a Democratic-led congressional panel’s subpoena for testimony from former White House Counsel Donald McGahn.The full U.S. Court of Appeals for the District of Columbia Circuit on a 7-2 vote said the House of Representatives Judiciary Committee had legal standing to seek to enforce the subpoena. It left other legal issues unresolved, meaning litigation will continue.”Today’s decision is a profound victory for the rule of law and our constitutional system of government,” said Representative Jerrold Nadler, chairman of the committee.Kerri Kupec, a spokeswoman for the Justice Department, said the administration would „vigorously press” the remaining arguments.As a result, the case is not likely to be concluded before the Nov. 3 election, in which Trump is seeking a second term.Writing for the court, Judge Judith Rogers wrote that the committee has shown it „suffers a concrete and particularized injury when denied the opportunity to obtain information necessary to the legislative, oversight and impeachment functions of the House.”The committee had sought testimony from McGahn, who left his post in October 2018, about Trump’s efforts to impede former Special Counsel Robert Mueller’s investigation that documented Russian interference in the 2016 U.S. election.McGahn declined to testify before the committee after the Justice Department advised him to defy the subpoena. The department argued that senior presidential advisers cannot be forced to testify to Congress about official acts and that courts lack jurisdiction to resolve such disputes.A district court judge ruled for the House in November but a three-judge appeals court panel reversed that decision in February. The House then asked the full court to hear the case.

Trump, seeking to thwart investigations by Democratic lawmakers, has directed that current and former officials defy congressional requests for testimony and documents on impeachment on a broad range of issues.

The House in December impeached Trump on two charges related to his request that Ukraine investigate presumptive Democratic presidential nominee Joe Biden, but the Republican-controlled Senate voted in February to leave him in office.

Friday’s ruling comes a month after the Supreme Court rejected Trump’s broad claims of immunity to congressional subpoenas in two cases involving attempts by the House to obtain his financial records from two banks and his accounting firm.

WASHINGTON — Secretary of State Mike Pompeo is denying congressional subpoenas for four key witnesses in a months-long investigation into his role in the firing of State Department Inspector General Steven Linick.

The department instructed subpoenaed officials not to appear before Congress until “a mutually acceptable accommodation can be reached,” according to a letter sent late Friday to the Hill and obtained by NBC News.

“Let me express how outrageous it is for you to suggest that the Department is ‘stonewalling’ any investigation into the President’s replacing of Steve Linick,“ Pompeo wrote to House Foreign Affairs Committee Chairman Eliot Engel. “For the past three months, you have refused every offer and attempt by the Department to reach a mutually agreeable accommodation to provide you with information you purport to seek.”

According to the letter, the State Department offered for the witnesses to appear as soon as Aug. 13th for a classified, on the record hearing before the committees despite Under Secretary for Management Brian Bulatao being the only official with knowledge of the circumstances surrounding Linick’s ousting.

“The Administration continues to cover up the real reasons for Mr. Linick’s firing by stonewalling the Committees’ investigation and refusing to engage in good faith,” Engel said in a statement Tuesday. „That stonewalling has made today’s subpoenas necessary, and the Committees will continue to pursue this investigation to uncover the truth that the American people deserve.”

Linick’s replacement, Stephen Akard, director of the Office of Foreign Missions and longtime associate of Vice President Pence, stepped down earlier this week. He was the third person to hold the position in three months.

Within hours of Pompeo’s letter, U.S. Ambassador to the United Kingdom Woody Johnson was also requested to appear before the committees as part of the probe. Johnson is accused of making racist and sexist comments to embassy staff and misusing his diplomatic post to advance the personal and financial interests of President Donald Trump. The Office of the Inspector General had completed its investigation into Johnson when he was ousted in late May, but the report has yet to be publicly released.

The State Department has backed the ambassador without directly addressing the allegations.

„Ambassador Johnson is a valued member of the team who has led Mission UK honorably and professionally. We stand by Ambassador Johnson and look forward to him continuing to ensure our special relationship with the UK is strong,” the department said in a statement.

Earlier Friday, nominee for U.S. ambassador to Peru and Pompeo’s executive secretary Lisa Kenna, another key witness, appeared voluntarily before the congressional committees in a closed door deposition. In her position as executive secretary, Kenna sees nearly all of the memos and paperwork set before Pompeo and is aware of the majority of his calls. Kenna has denied involvement or awareness of the circumstances surrounding Linick’s removal.

Among the four facing congressional subpoenas is Bulatao, a senior adviser and longtime Pompeo friend, who was accused of bullying the IG during the course of his investigations into an $8 billion emergency arms sale as well as a review of Pompeo and wife Susan’s potential misuse of Department resources. Bulatao was slated to testify July 2, but the committees delayed the appearance at the request of the State Department, which wanted to review the completed IG report into the emergency arms sale. That report, similarly, has not yet been published.

Two key witnesses to the arms sale, acting State Department legal adviser Marik String and Deputy Assistant Secretary of State for Political-Military Affairs Michael Miller were also among those subpoenaed by the committee, as well as senior adviser Toni Porter, who is central to the investigation into the potential abuse of State Department resources.

Pompeo has maintained he was unaware of the inspector general’s ongoing investigations save one and played no role in his recommendation to the president that Linick be removed from the office.

“You said that the IG was not performing in the way he should have, because he wasn’t following an essence what you wanted to.” Menedez said in response. “Inspector generals aren’t supposed to follow what the department head wants to, they’re supposed to be independent in pursuit of their mission.”

Cypriot police have questioned Igor Grechushkin, the Russian businessman whose ship carried the explosive cargo that devastated Beirut on Tuesday, according to news reports.

Grechushkin was the owner of the MV Rhosus, the ship that carried 2,750 tons of explosive ammonium nitrate, before abandoning it in Beirut in 2014.

Those materials were stored in Beirut’s port for six years, before they detonated in Tuesday’s catastrophic explosion, as Business Insider reported.

Related: The US military for the smelliest weapon in the world

1:28
2:11
We can thank the US military for the smelliest weapon in the world 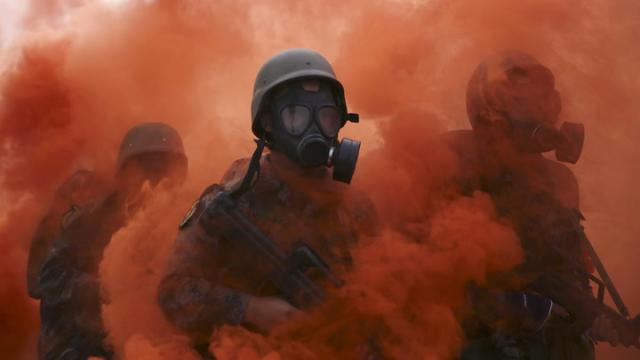 The 43-year-old is based in Limassol, Cyprus, according to multiple reports in local media there. The island state is a common haunt for wealthy Russians.

Lebanese authorities have placed numerous port officials — who were repeatedly warned about the dangers of storing the explosive materials — under house arrest pending an investigation, according to the BBC.

Cyprus police offered assistance to Interpol and Lebanese police after Grechushkin was identified as the former owner of the Rhosus.

A police spokesperson said that Grechushkin, a Cypriot resident, was „very willing to come forward,” according to In-Cyprus News, an online news site.

Cyprus police spokesperson Christos Andreou told MailOnline that the interview lasted several hours. „He is not facing any charges, nor is it likely that he will,” he said.

„The request came in late Thursday and we acted on it immediately. It was a list of questions that authorities in Beirut wanted Grechushkin to answer.”

Andreou told the outlet that Grechushkin was not suspected of wrongdoing given that authorities in Beirut took charge of the cargo years ago and were responsible for storing it.

Police said the details of the interview, which have not yet been made public, will be passed to Beirut officials, according to Reuters. The police spokesperson did not identify the person interviewed to Reuters, but an unnamed security source said it was Grechushkin.

The Siberian Times published a picture purporting to be of Grechushkin, posing on motorcycle. Business Insider has been unable to verify if the image is genuine.

Business Insider has been unable to reach Grechushkin for comment.