U.S.Iowans grapple with aftermath of Monday’s deadly derecho, ‘a disaster that we have never seen’ 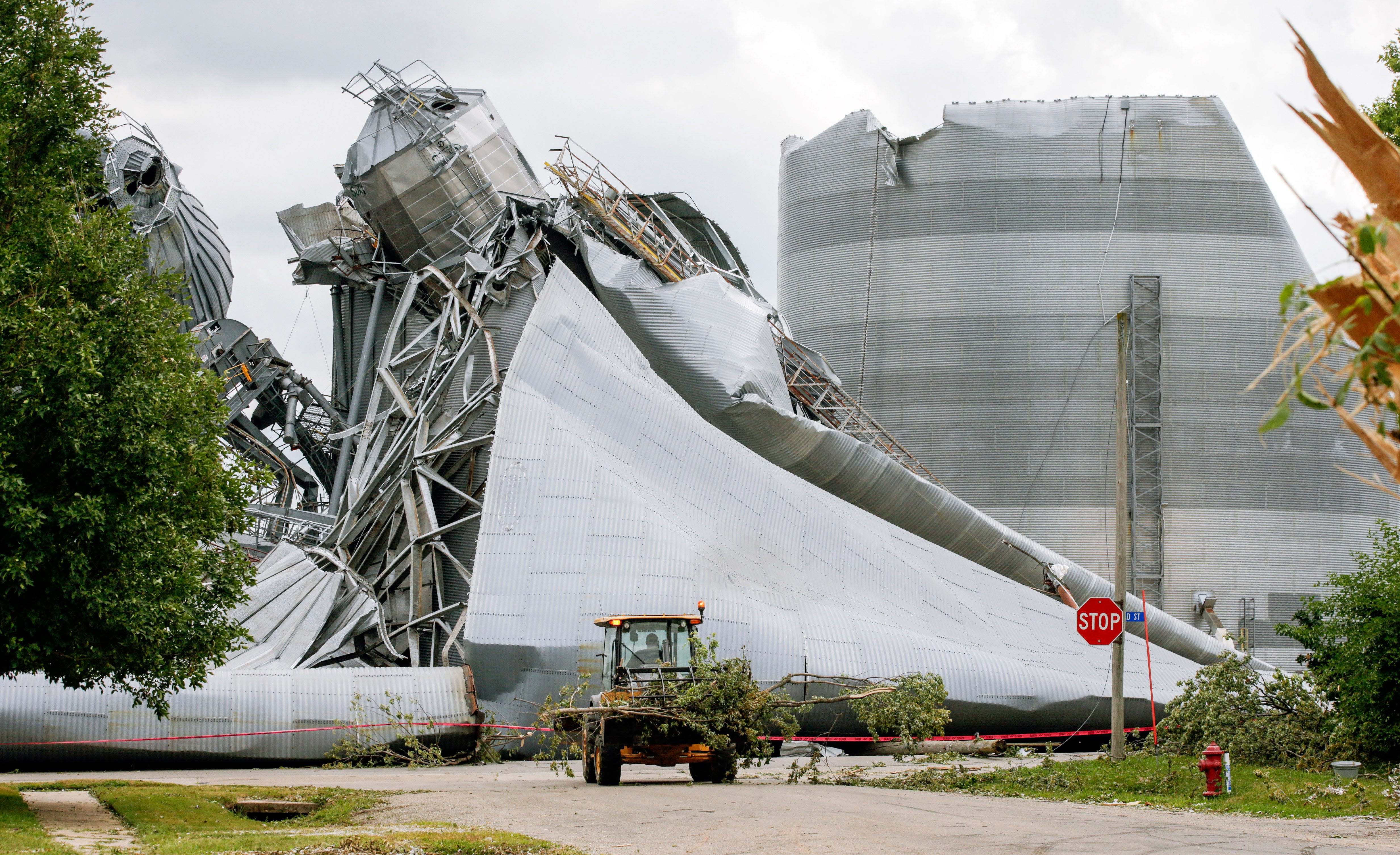 Iowans grapple with aftermath of Monday’s deadly derecho, ‘a disaster that we have never seen’Iowans continue to deal with the aftermath of the ferocious derecho storm that roared across the Midwest on Monday.The storm, with straight-line winds that reached nearly 100 mph in parts of Iowa, swept across Nebraska, Iowa, Illinois, Indiana, Wisconsin and Michigan before losing steam. There have been three confirmed deaths related to the storm in Iowa. One other person was killed in Indiana. As of midday Friday, some 140,000 customers remained without power in Iowa, according to poweroutage.us. Another 60,000 were without power in Illinois.Iowa will submit its application for a federal disaster declaration on Monday, and Iowans should have power fully restored by Tuesday, Gov. Kim Reynolds said Friday. Her comments came as she provided updates on the state’s response in Cedar Rapids, where thousands of residents are still coping with the aftermath of Monday’s derecho.”I want Cedar Rapids and Linn County, and all those that have been impacted by this national disaster, to know that the entire state of Iowa stands with you,” she said. She said she has already spoken to President Donald Trump and Vice President Mike Pence about the need for help and is hopeful the disaster application will be approved quickly.Cedar Rapids was the state’s hardest-hit city, where officials said Thursday the damage left by Monday’s derecho was more extensive than the 2008 flood that destroyed much of its downtown.Reynolds said 100 engineers with the Iowa National Guard had mobilized in Cedar Rapids, and the state is working on setting up cooling shelters and charging stations.Related: July’s storms brought lightning strikes near the Lady LibertyMore: Monday’s derecho damaged 10M acres of crops in Iowa The straight-line winds that toppled trees and power lines across much of Iowa was “unlike anything our company has ever seen,” Alliant Energy spokesman Mike Wagner said. Hundreds of workers were assessing damage and clearing trees that have blocked roads and power lines, he said.

A spokesman for ITC Midwest – which maintains much of the transmission infrastructure for Alliant and other utilities – said Monday’s derecho caused the worst damage to transmission lines in the company’s history, the Cedar Rapids Gazette said.

Cedar Rapids city manager Jeff Pomeranz said the storm touched every square mile of the city of 133,000 people, destroyed thousands of trees, damaged homes and businesses and prompted a record number of calls for emergency assistance. He said hospitals were also overwhelmed with emergency room visits by those injured or in need of other medical treatment.

“This is a disaster that we have never seen before. It is something that was essentially like a hurricane coming through the Midwest” without advance notice, said U.S. Rep. Abby Finkenauer, a Democrat who represents Cedar Rapids in Congress.

Several residents and a major labor union had criticized Reynolds for not moving faster to provide aid after Monday’s storm.

“Everybody is doing the best they can,” Reynolds said at the news conference in Cedar Rapids.

Several residents said they were struggling to meet their basic needs and growing increasingly frustrated.

During a news conference Tuesday, Reynolds said farmers have told her the damage „has just been devastating … they have never seen anything like this.”

Fortunately, although some severe weather is possible in portions of Iowa on Friday afternoon and evening, there is no forecast of another derecho, which is a very rare weather event. And good weather is in the forecast after Friday: „After clouds clear Saturday, ample sunshine, seasonable and mainly dry conditions will prevail into early next week,” the National Weather Service in Des Moines said.

Days after a rare storm with the wind speed of a Category 2 hurricane ravaged through the Midwest, hundreds of thousands of people in Iowa are still without electricity. The deadly storm, known as a derecho, ripped across Iowa and surrounding states on Monday, heavily damaging schools, homes and millions of acres of farmland in its wake.

More than 200,000 people Alliant Energy customers lost power because of the storm, the utility said. As of Saturday afternoon, about half of those customers were still without power. Alliant Energy said on Saturday that they expect a „significant number of customers” will have access to power by the end of day on Tuesday.

Cedar Rapids was one of the hardest hit areas in the state. At least 1,627 properties were damaged, and more than 1,000 homes are now „unlivable,” CBS affiliate KGAN reported.

Tim Quinn, chief of clinical operations for Mercy Medical Center, told Iowa Public Radio that hospitals are being flooded with patients. Although damage to hospitals is not „catastrophic,” he said, it’s „definitely widespread.”

On Friday, UnityPoint Health’s St. Luke’s Hospital in Cedar Rapids said they treated 265 patients in the emergency room in 24 hours.

Hundreds of people have posted photos and videos of the devastation on social media, many begging for help. They are various reports of destroyed homes and of people going days without access to food or water.

#IowaDerecho Why no news coverage?! Aug 10, Cedar Rapids, IA was LEVELED by an inland hurricane. Exhausted from cleanup, no power, no gas for cars, roofs caved in, food & meds spoiling, spotty cell service so no 911, This was my backyard; and I was lucky. HELP US! pic.twitter.com/N8PPXZGSmo

U.S. Representative Abby Finkenauer of Iowa’s 1st congressional district posted a video on Twitter Friday saying that she is „going on night 5 of no electricity.”

„At least there is gas now available within the city,” she said in the video that was taken in front of an uprooted tree. „We still need ice. We still need food, flashlights for folks. It is still very scary. … We know this is going to be a long road ahead.”

Going on night 5 of no electricity and so much work left to be done all around #ia01 … Some signs of hope from a parade of @alliantenergy trucks to gas available for generators, but so much help still needed and we won’t stop fighting for it. #derecho2020 pic.twitter.com/bguoL5IXOb

Actor Ashton Kutcher, who is from Cedar Rapids, Iowa, slammed the federal government in a series of tweets this week about the lack of response to the devastation.

„Where is the federal relief for Iowa,” he posted on Friday. „10m acres of crops have been destroyed. Houses. Communities. Wake up federal gov! What because it’s not called a tornado or hurricane you don’t need to act fast?”

Where is the federal relief for Iowa? 10m acres of crops have been destroyed. Houses. Communities. Wake up federal gov! What because it’s not called a tornado or hurricane you don’t need to act fast? Come On!!

Kutcher directed his concerns at President Trump and Vice President Mike Pence. Pence was in Urbandale, Iowa, on Friday, and used the damage from the storm to tout his support for law enforcement during a town hall.

The same day, the Iowa National Guard was deployed into Cedar Rapids to help remove debris. Governor Kim Reynolds has announced emergency declarations for dozens of counties in the state.

„The destruction was indescribable,” she said at a press conference on Friday, adding that Trump and Pence have „pledged their support” and told her they are ready to approve a federal disaster declaration. Reynolds said the state will submit an application on Monday for the declaration.

The Iowa Department of Agriculture and Land Stewardship announced that more than 6 million acres of corn and soybeans were greatly impacted by Monday’s storm. Some of the crops, the department said, were „destroyed.”

The state said it lost „tens of millions of bushels” of grain storage from the storm. Some of that loss took place just 60 miles away from where Pence launched a „Farmers and Ranchers for Trump” coalition in Des Moines.

Mr. Trump tweeted on Tuesday that the federal government „is in close coordination with state officials.”

At least three people in Iowa and one person in Indiana were killed by the storm, which is believed to have traveled 1,000 miles from South Dakota to northwest Ohio.

The storm hit as Iowa is dealing with rising cases of coronavirus. There were 841 new cases reported on Saturday, according to KGAN, and more than 51,000 people have been diagnosed with the disease so far.