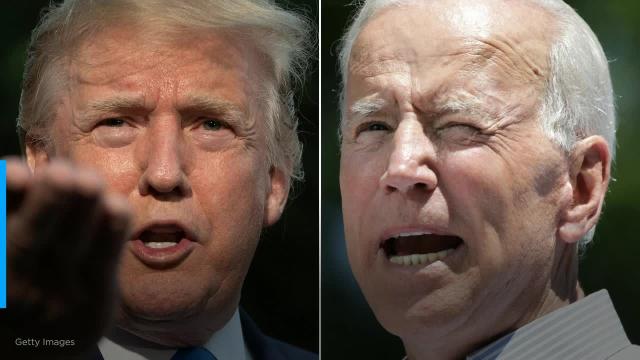 The presidential race between Joe Biden and Donald Trump has tightened after this week’s Republican National Convention, according to a new Yahoo News-YouGov poll, with Biden’s lead shrinking to 6 points — his smallest margin in nearly two months. The convention appears to have boosted perceptions of Trump’s “strength” and convinced a small number of former Biden supporters to move toward the president. But the unrest in Kenosha, Wis., following the police shooting of Jacob Blake, a major talking point at the RNC, has not had a clear impact on voters’ choices — at least not yet.For its latest Yahoo News survey, which was conducted from Aug. 27 to Aug. 28, YouGov recontacted respondents who participated in Yahoo News-YouGov poll one month earlier to gauge how the RNC and other events have affected their views. The poll taken at the end of July showed Biden with a lead of a little less than 9 percentage points. In the new survey, those same registered voters give Biden an edge of just over 6 points (47 percent to 41 percent).

Democratic presidential candidate Joe Biden and his running mate, Sen. Kamala Harris, D-Calif., on night four of the Democratic National Convention at the Chase Center in Wilmington, Del., on Aug. 20. (Andrew Harnik/AP)So why did a small number of voters shift toward Trump over the last month?The most pronounced change involved perceptions of the president’s “strength.” Right before the RNC, 33 percent of Americans said Trump possessed this quality; right after, that number increased to 38 percent. Over the last month, the numbers of Americans saying Trump “cares a lot about people like you” rose from 19 percent to 22 percent, while the percentage saying they like him “a lot” or “somewhat” rose from 24 percent to 28 percent. It’s possible that a handful of voters who now consider Trump stronger and more likeable than before have decided to vote for him as a result. Since late July Trump’s job approval on COVID-19 has also increased slightly — from 38 percent to 40 percent — as the rate of growth in cases and daily death figures have been gradually declining. (Deaths now total over 180,000 and are growing at around 1,000 a day.)Yet beyond these modest changes, the poll does not show voters gravitating toward Trump in search of “law and order” at a time of protest and civil unrest. It’s not that Americans are unconcerned about the issue. In July, 59 percent said they were either “very” or “somewhat worried” about “a breakdown of law and order in American cities”; exactly 59 percent say the same now, one month later. They are evenly divided over whether systemic racism (49 percent) or a breakdown of law and order (51 percent) is the bigger problem.

President Trump delivers his acceptance speech as the 2020 Republican presidential nominee during the final event of the Republican National Convention on the South Lawn of the White House on Aug 27. (Kevin Lamarque/Reuters)The issue for Trump is that voters remain unconvinced he will improve the situation. If the goal of the RNC was to tar Biden as a radical who will endanger Americans’ safety, it was not a success. One month ago, 37 percent of the public thought America would become more safe if Biden were elected; 35 percent said the country would become less safe. After both conventions, those numbers were 39 percent to 38 percent — no real change in the margin. Nor did Trump convince Americans that he will make them safer. Today, 43 percent say the country will be less safe if Trump is reelected. Just 32 percent say it will be safer. One month ago, those numbers were nearly identical: 44 percent to 31 percent. Asked who would have handled the protests better, 43 percent say Biden. Only 35 percent say Trump. And despite the RNC’s grim warnings — and the nightly news reports about chaos in Kenosha — most Americans aren’t particularly concerned about violence in their own communities, with 62 percent saying they are “not very worried” or “not worried at all.” In fact, a majority of Americans (52 percent) think a second Trump term will lead to more violence of the sort seen in Kenosha. Only a quarter think Trump’s reelection will lead to less violence. Asked which comes closest to their view, just 27 percent say “Trump will protect us from the chaos.” A plurality (46 percent) say “Trump is the source of the chaos.” Those numbers have not changed over the last month. Meanwhile, more people (34 percent) think Trump is a radical than think the same of Biden (21 percent) — a sign that the president comes across as a more extreme figure than his opponent. A full 61 percent of Americans now say “bringing people together” is the right way to get things under control versus just 39 percent who prefer “law and order” — a 10-point swing toward unity since late July.

People march during a protest following the police shooting of Jacob Blake, a Black man, in Kenosha, Wis. (Brendan McDermid/Reuters)This isn’t to say that voters dismiss the unrest in Kenosha, or that if similar events were to grip other cities, it wouldn’t affect their political views. While Americans continue to approve of the Black Lives Matter movement (49 percent favorable, 37 percent unfavorable) and say that protestors want to improve (54 percent) rather than destroy (46 percent) America — numbers that have barely moved over the last month — they also seem to be losing patience with scenes of violence. Since late July, the number who say the protests over police shootings of Black Americans have been mostly peaceful has fallen from 30 percent to 28 percent while the number who say the protests have been “mostly violent riots” has climbed from 33 percent to 37 percent. A majority (54 percent) say the protests have gone too far. Only 20 percent of Americans say the shooting of Jacob Blake was justified. At the same time, they also think the protests in Kenosha were mostly violent (40 percent) rather than mostly peaceful (15 percent). A wide majority (59 percent to 21 percent) says that violence by protesters was a bigger problem than violence toward protesters — even though three protesters were shot and two killed by Kyle Rittenhouse, an armed teenager from Illinois who took it upon himself to patrol the streets. Twenty percent of Americans believe Rittenhouse was “right to try to maintain order when no one else would,” a position forcefully advanced by Fox News host Tucker Carlson, among others.  Part of the shift in sympathy away from protesters may reflect declining awareness of events. A few days after the killing of George Floyd in Minneapolis, 75 percent of Americans said they had heard at least “some” news about the situation there; 70 percent reported seeing the video of Floyd’s killing. Today, only 58 percent say they have heard at least some news about “what’s happening in Kenosha, Wisc.”, while just half say they have watched the Blake video. Perhaps as a result, far fewer Americans consider race a “major factor” in Blake’s shooting (40 percent) than said the same about Floyd’s killing (61 percent) in late May.

Joe Biden and President Trump. (Photo illustration: Yahoo News; photos: AP (2), Getty Images)____________________The Yahoo News survey was conducted by YouGov using a nationally representative sample of 1,001 U.S. adult residents interviewed online August 27-28, 2020. The respondents all participated in a prior Yahoo News survey conducted July 28-30, 2020 and were contacted to participate. Of the 1,506 adults in the July 28-30, 2020 survey, 1,001 responded to this survey – a recontact rate of 66.5%. Respondents were re-interviewed from the previous nationally representative survey. The sample was weighted to gender, age, race, education, geographic region, news interest, 2016 Presidential vote and registration status, and baseline vote intention of the first wave. The margin of error is 4.2 percent (and 4.5 percent for the sample of registered voters)

President Donald Trump on Saturday visited Louisiana and Texas, pummeled this week by Hurricane Laura though the storm did not inflict the catastrophic damage and death toll of Hurricane Katrina 15 years ago.

Wearing a red „USA” cap, Trump landed in Lake Charles, a Louisiana city of 80,000 people that’s home to petroleum refineries and chemical plants near the Gulf of Mexico.

The president — not wearing a mask despite the coronavirus epidemic in the United States — toured a neighborhood with downed trees and damaged houses, as well as a warehouse.

The Federal Emergency Management Agency (FEMA) has already distributed 2.6 million liters of water and 1.4 million meals, Trump said, as hundreds of thousands of storm victims are without electricity and running water.

„I haven’t had one complaint,” Trump said, congratulating federal and local officials at a news conference at a fire station.

„Louisiana has been through a lot with the Covid and with this, a couple other things. You’ve done a great job,” he told the officials, who included the state’s Democratic Governor John Bel Edwards.

Hurricane Laura struck the coast of Louisiana early Thursday as a Category 4 storm, packing winds of 150 miles (240 kilometers) an hour.

It has been blamed for at least 14 deaths in Louisiana and Texas, with more than half of them due to improper use of portable generators, which produce toxic carbon monoxide gas.

Trump later flew by helicopter to the nearby city of Orange, Texas, meeting with state officials to discuss their response to Laura.

At a briefing, Texas Governor Greg Abbott said he believed the state got through Laura without spreading Covid-19.

„You are helping Texas to rebuild,” Trump told the governor.