Waves crash on the coast as Typhoon Haishen approaches the Japanese prefecture of Kagoshima Typhoon Haishen is making its way towards South Korea after slamming through southern Japan.

More than 300 flights from 10 airports were cancelled, with some train services suspended.

The typhoon caused a loss of power across hundreds of thousands of homes in Japan, though initial assessments suggest it did less damage than feared.

Thirty-two people were injured, including four who sustained cuts after the glass windows of an evacuation centre were blown in, according to Japanese broadcaster NHK.

Some eight million people in Japan had been asked to evacuate in the path of the storm.

The storm comes days after Maysak, one of the region’s strongest typhoons in years, slammed into the Korean peninsula and Japan last week.

How has South Korea been impacted?

High winds have already cut power to almost 5,000 households on the southern tip of the Korean peninsula, including the resort island of Jeju, says a Reuters report.

A typhoon alert has been issued for Jeju and other southern parts of South Korea like Gyeongsang province.

But a KMA official told Yonhap News that it was likely the typhoon would weaken as it passed by.

What effect did the typhoon have on Japan?

Haishen has led to the closure of factories, schools and businesses across western Japan. Hundreds of flights and train services were also cancelled.

The typhoon has also forced Japan’s coast guard to suspend its search for missing sailors from a cargo ship that sank during Typhoon Maysak.

The Gulf Livestock 1 was carrying 43 crew members and 6,000 cows when it went missing on Wednesday. Three crew members were rescued alive.

A landslide hit this apartment building in Geoje, South Korea after slamming southern Japan with record winds and heavy rains

A powerful typhoon lashed South Korea on Monday after smashing into southern Japan with record winds and heavy rains that left four people missing in a landslide.

Half a million people were without power after Typhoon Haishen roared past Japan’s southern-most main island of Kyushu, ripping off roofs and dumping half a metre (20 inches) of water in just a day.

Rescue workers were picking through mud and detritus after a hillside collapsed in rural Miyazaki.

Dozens of police officers were on their way to help, Chief Cabinet Secretary Yoshihide Suga told reporters in Tokyo.

At least two other deaths had been reported during the storm, he said, although the causes were not immediately known.

Haishen, which came on the heels of another powerful typhoon, crashed into Okinawa on Saturday and moved northwards throughout Sunday.

Around 1.8 million people were told to seek shelter, for fears that the 200 kilometre-per-hour (135 mile-per-hour) winds would wreak havoc on Japan’s  wooden housing stock.

By lunchtime on Monday, the system had moved over South Korea, forcing the cancellation of hundreds of flights, and sparking landslides.

Traffic lights and trees were felled in and around Busan, streets were flooded and power was knocked out to thousands of homes.

Haishen was churning its way up the eastern side of the peninsula into the Sea of Japan, known as the East Sea in Korea, having lost some of its destructive force, but still packing winds of up to 126 kilometres per hour.

Haishen was forecast to make landfall again in Chongjin, North Hamgyong province in North Korea, at around midnight, according to South Korea’s Meteorological Administration.

North Korea is still reeling from the effects of Typhoon Maysak last week.

Leader Kim Jong Un appeared in state media over the weekend, where he was shown inspecting the damage. He also sacked a top provincial official in South Hamgyong.

He ordered 12,000 ruling party members in Pyongyang to help with recovery efforts, and the official KCNA news agency reported Monday that around 300,000 had responded his call. 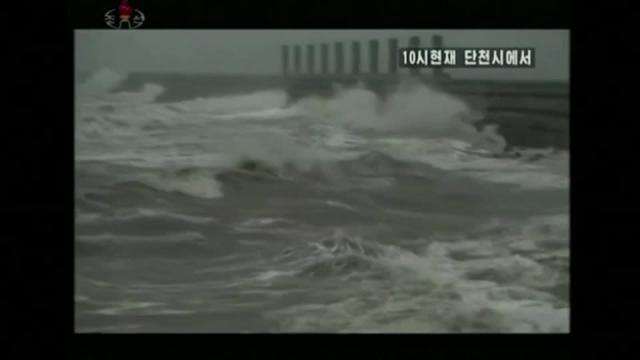 By Sangmi Cha and Sakura Murakami

SEOUL/TOKYO (Reuters) – South Korea hunkered down as Typhoon Haishen arrived on the shores of its southern peninsula on Monday, after the powerful storm battered Japan’s southern islands but appeared to pass through without major damage or casualties.

The storm, carrying top sustained winds of up to 126 km (78 miles) per hour, was headed north from a southern city of Ulsan, after landing on a nearby shore on Monday morning, South Korea’s weather agency said.

High winds have already cut power to almost 5,000 households in the southern tip of the Korean Peninsula, including the resort island of Jeju, which has reported more than 473 mm (19 inches) of rainfall since Saturday.

Officials have evacuated almost 1,000 people, while more than 300 flights across 10 airports, including Jeju International Airport, have been cancelled. Entries to national parks and some national train services have been suspended, the country’s safety ministry added.

In Japan, around 440,000 homes in the southwestern Kyushu region remained without power on Monday morning after the storm passed through, public broadcaster NHK reported. It added that 32 people were injured, including a woman who fell down a flight of stairs in the dark and four people who sustained cuts after the glass windows of an evacuation centre were blown in.

Almost 2 million people had been ordered to evacuate the region, which was still recovering from heavy rains and flooding in July that killed 83 people.

North Korea, which bore the brunt of both Maysak and Typhoon Bavi a week earlier, is also in Haishen’s trajectory with the storm expected to draw near the port city of Chongjin late Monday.

Live footage on state TV, a rarity that has now been broadcast for three weeks, showed trees shaking and waves rising in Tongchon county in Gangwon province bordering the South. The state broadcaster reported that all Tongchon residents had been evacuated.

Helicopters have rescued more than 200 people trapped after a wildfire set 45,000 acres alight and cut off a popular reservoir in California, officials say.

About 20 of the people were hurt, some with burns.

The Creek Fire began on Friday in the Sierra National Forest, cutting off the Mammoth Pool Reservoir, 40 miles (60km) north-east of Fresno.

The temperature has hit 47C (117F), part of a record heatwave in the state.

On Sunday, Governor Gavin Newsom declared a state of emergency in five Californian counties – Fresno, Madera, Mariposa, San Bernardino and San Diego – because of the wildfires.

The fast-moving Creek Fire started at about 18:45 on Friday (01:45 GMT on Saturday) in the forest, an area of steep and rugged terrain.

National forest spokesman Dan Tune said he did not know how close the fire was to the campsite, a popular boating and fishing destination.

Two people refused to be rescued and stayed behind at the site.

The Fresno Convention Centre is being used to host the rescued people.

Mandatory evacuation orders are in now place for a number of areas in Madera County.

According to California Department of Forestry and Fire Protection, 0% of the fire is contained.

The National Weather Service (NWS) said there could be „rare, dangerous and very possibly fatal” temperatures across parts of southern California.