An estimated 500,000 Oregon residents are facing evacuation because of the wildfires that have burned hundreds of thousands of acres, according to the Oregon Office of Emergency Management.

The nearly 70 active wildfires raging along the West Coast have produced the worst air quality on the planet. Portland, Seattle and San Francisco were the top-three worst, according to IQ Air, as of Friday night. Los Angeles ranked seventh.

At least 25 people have been killed this year in the fires, including 18 just this week.

Amid the devastating blazes, Oregon Gov. Kate Brown issued an executive order to combat price gouging. This is in response, she said, to reports that some essential consumer goods and services, especially lodging, saw outsized price increases.

„During a statewide emergency, it is absolutely unacceptable to price-gouge Oregonians who have already been hard hit and are facing devastating loss,” Brown said in a statement Thursday.

As of Friday night, there were 36 active fires burning more than 1 million acres, or 1,500 square miles, in Oregon. The largest, the Beachie Creek Fire, has burned at least 185,000 acres and was 0% contained. The fire has killed at least two people and injured at least four others.

„Thousands of evacuated Oregonians are sleeping in motels, on cots in shelters, or with friends/family,” Brown tweeted. „Please know that we are doing everything in our power to fight these fires.”

MORE: Man charged with arson in connection with Almeda Fire in southern Oregon

As state and local emergency responders continue their heroic work, they’ll now be getting some additional federal help.

A day after a delegation of Oregon lawmakers sent a letter to President Donald Trump asking for disaster assistance, he approved the state’s emergency declaration.

„The President’s action authorizes the Department of Homeland Security, Federal Emergency Management Agency (FEMA), to coordinate all disaster relief efforts which have the purpose of alleviating the hardship and suffering caused by the emergency on the local population, and to provide appropriate assistance for required emergency measures … to save lives and to protect property and public health and safety, and to lessen or avert the threat of a catastrophe,” a statement from the White House said.

In California, at least 14,000 firefighters were one the front lines Friday battling 28 major active wildfires. Many firefighters there have braved the grueling conditions for almost a month straight. Since the beginning of the year, wildfires have scorched a combined 3.1 million acres — an area larger than Connecticut.

The North Complex Fire, formerly known as the Bear Fire, has burned more than 252,500 acres, was 23% contained and has resulted in at least 10 deaths. It also destroyed at least 2,000 structures.

California Gov. Gavin Newsom declared a state of emergency Thursday for Siskiyou County, where the Slater Fire was at 127,000 acres and 0% contained.

Six of the top 20 largest wildfires in California history have occurred this year.

The August Complex Fire had covered at least 746,607 acres and was 25% contained, while the El Dorado Fire near San Bernardino reached 13,000 acres and was 31% contained.

In Washington, the Cold Springs Fire in Okanogan County reached 187,000 acres and was 25% contained. A young child was killed in that fire earlier this week, with both parents suffering critical burn injuries. 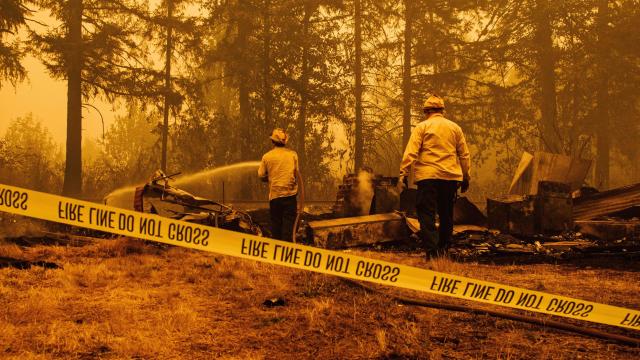 Dozens of wildfires in Oregon have forced the evacuation of more than 500,000 residents, prompting Portland Mayor Ted Wheeler to declare a state of emergency Friday as two massive blazes converged at the doorstep to his city.

While scores of wildfires have erupted over the past weeks in Oregon, two of the largest, the Beachie Creek and Riverside fires, appeared about to merge, forcing the evacuation of portions of Clackamas and Marion counties. Those two counties, which neighbor Portland to the south, have a combined population of nearly 1.4 million.

“We have never seen this amount of uncontained fire across our state,” Gov. Kate Brown said at a press conference Friday.

So far, over 306,000 acres have burned in Oregon this year, which has also seen record fire damage in Washington and California.

The scale of the devastation in Oregon is staggering, displacing 1 out of every 10 residents in the state and so far taking the lives of at least 15 people.

“It’s incredibly smoky in Bend,” local resident Michael Omar told Yahoo News. “Approximately 500,000 people [are] evacuating on the other side of the [Cascade] Mountains. It’s like a smoky fog — you can see down the street, but the light is a dim orange.”

As in neighboring states, the massive amounts of smoke produced by the fires mean that even those residents spared the need to evacuate are suffering from an unhealthy air quality in which toxic ash and smoke coat outdoor surfaces.

Portland’s air quality deteriorated over the past day, making it less safe to breathe than in any other city on the planet. Similar conditions prevailed in much of Northern California and as far south as San Francisco. Thanks to approximately 30 large wildfires in Washington, an orange-gray haze has also extended north to Seattle and covers much of the state’s pristine wilderness. The National Weather Service said Friday that air quality would continue to worsen throughout the day in western Washington.

The fires have wreaked destruction on everything in their path.

“Well, a home where I used to live in Phoenix [Ore.] burned, and campgrounds I stayed at on Detroit Lake [also in Oregon] this summer burned,” Portland resident Bill Redden, a retired public defender, told Yahoo News. “If there’s a take on that, it’s that Oregon is still a small enough state that most everyone has some sort of personal connection to the destruction.”

Jason Houk, a radio DJ on KSKQ in Ashland, said roughly 800 homes were destroyed in the town on Tuesday when a wall of flames from the Almeda Fire tore through Ashland, Talent and Phoenix.

With scarcely enough time to grab their passports, Houk, his wife and their two daughters evacuated, but their mobile home was destroyed along with 80 others in the complex where they lived. Returning to view the devastation, Houk said the mobile home park now „looks like the pictures of Hiroshima. Utter devastation.”

“Anything that could burn burned, any metal was twisted, any aluminum melted, any brick shattered, anything once green is black,” Houk told Yahoo News.

Millions of acres have burned across the West this year, and experts point to climate change as a contributing factor in the unfolding disaster. Across 11 Western states, including Oregon, Washington and California, approximately 87 percent of the landscape is abnormally dry, according to the U.S. Drought Monitor. Even more startling, much of the normally rain-soaked states of Oregon and Washington — where wildfires have erupted this week — is suffering severe drought.

The frequency of wildfires in California has been directly linked to rising temperatures, which turn dangerous underbrush and dead trees into ready kindling. This year, more than twice the yearly amount of land has burned in Oregon, and California is setting its own records.

For those who live in the West, the speed with which the fires can transform reality has proved especially disconcerting.

“We had a clear and smoke-free summer until this week,” Christian Nielsen, a lab scientist in Portland, told Yahoo News. “We went from the mildest fire summer in five years to the worst in a few days. Crazy.”

Perhaps the only silver lining about the wildfires is that the nightly clashes between police and protesters in Portland have taken a pause.

“I haven’t heard a word in the last two or three days about any nighttime protests. I think that’s due to the air quality,” Portland resident Angie Jabine said. “If I were a protester, I’d want any excuse to take a few nights off!”