Trump, pressed during ABC town hall on downplaying pandemic threat, says instead he ‘up-played it’ 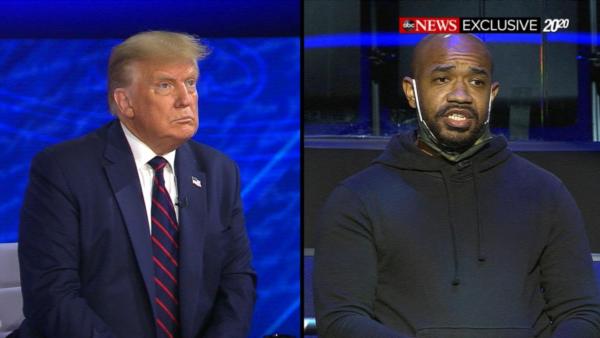 With less than two months until ballots are tallied, President Donald Trump defended his handling of race relations in the United States amid a pandemic that has disproportionately affected minority populations and unprecedented social unrest in American cities.

Asked Tuesday by an uncommitted voter at ABC News’ town hall, „The President and the People,” why he would „downplay a pandemic that is known to disproportionately harm low-income families and minority communities,” Trump denied ever understating the disease’s threat.

„Yeah, well, I didn’t downplay it. I actually, in many ways, I up-played it, in terms of action. My action was very strong,” Trump said.

As evidence of his claim that he „up-played” the disease „in terms of action,” Trump cited a pair of travel bans imposed against China and Europe in February and March. But pressed by ABC News Chief Anchor George Stephanopoulos, who moderated the town hall, about „his own words” about the pandemic threat, Trump said, „We did a very, very good job when we put that ban on.”

„Whether you call it ‘talent’ or ‘luck,’ it was very important,” Trump continued, „so we saved a lot of lives when we did that.”

MORE: Republicans unveil agenda aimed at winning back the House in November

The president has faced backlash in recent days after comments he made to journalist Bob Woodward in March which appeared to conflict with his dismissive public stance on the virus at the time — a virus that, according to the Centers for Disease Control and Prevention, has disproportionately affected Black and Hispanic populations.

Another uncommitted voter questioned the president about his ubiquitous campaign slogan, „Make America Great Again,” in light of a long history of systemic racism in housing and criminal justice.

„Because you say again, we need to see when was that ‘great’? Because that pushes us back to a time in which we cannot identify with such ‘greatness,'” the voter asked. „You’ve said everything else about choking and everything else, but you have yet to address and acknowledge that it has been a race problem in America.”

„Well, I hope there’s not a race problem,” Trump said. „I can tell you there’s none with me because I have great respect for all races — for everybody. This country is great because of it.”

The president then turned to what he called „the best unemployment numbers they’ve ever had in the Black community, by far,” prior to the economic fallout from the pandemic.

„And that was solving a lot of problems, and you know what else was — it was bringing people together,” Trump said.

MORE: What President Trump said about the coronavirus versus what Bob Woodward recorded in interviews: Timeline

The president faced a wide range of questions from uncommitted voters on Tuesday at the National Constitution Center in Philadelphia during the town hall event hosted by ABC News.

The location of ABC News’ „20/20” event is not only historically significant, but represents a key city in a state that could tilt the balance of the Electoral College. After Florida, Pennsylvania boasts the second-highest number of electoral votes at stake among battleground states, rendering it a crucial stepping stone in both candidates’ paths to the presidency.

As such, Trump and his surrogates have crisscrossed Pennsylvania in recent weeks. But so has former Vice President Joe Biden, a native of Scranton, a town in the state’s industrial northeast. Both leaders commemorated the Sept. 11 terrorist attacks by visiting the site of a downed jetliner in Shanksville.

Despite winning Pennsylvania by a slim margin in 2016, recent polling indicates that Trump has an uphill battle in the waning weeks of the 2020 campaign. According to an NBC/Marist poll released last week, Biden maintains a healthy nine-point buffer among likely voters in the state.

ABC News offered to host a similar town hall with Biden, but the two parties were not able to find a mutually agreeable date.

Trump, pressed during ABC town hall on downplaying pandemic threat, says instead he ‘up-played it’ originally appeared on abcnews.go.com

Fox News released its first national poll of likely voters in the 2020 election on Sunday, and Democrat Joe Biden leads by 5 percentage points, 51 parent to 46 percent, right at edge of the margin of sampling error. „Likely voters trust Trump over Biden on just one issue: the economy, by 5 points,” Fox News notes. „Biden is favored on racial inequality (+12), coronavirus (+8), health care (+8), Supreme Court nominations (+7), and immigration (+7 points),” plus „policing and criminal justice” (+7) and „maintaining law and order” (Biden +2).

„Law and order,” or course, is Trump’s current campaign theme. Another frequent attack he and his surrogates have been making against Biden is that the former vice president isn’t mentally up to the job. Likely voters disagree, Fox News found. A 51 percent majority said they „think Joe Biden has the mental soundness to serve effectively as president” versus 47 percent who said the same of Trump; 51 percent of likely voters said Trump does not have the mental soundness to be president, versus 45 percent who said the same of Biden.

Biden also topped Trump on the question of having the compassion to serve effectively as president, with 62 percent saying Biden passes that test while 54 percent said Trump failed it. Biden leads Trump in the question of who could bring the country together better by 13 points, but 51 percent of registered and likely voters guessed Trump would be re-elected.

RealClearPolitics has Biden up 7.5 points in its aggregate of national polls, 50.5 percent to 43 percent; FiveThirtyEight‘s polling average has Biden ahead by 7.3 points, 50.6 percent to 43.3 percent, and its forecast currently gives him 75 percent odds of winning. The Fox News poll, conducted Sept. 7-10 under the joint direction of Beacon Research (D) and Shaw & Co. (R), reached 1,191 likely voters by phone, and its margin of sampling error is ±2.5 percentage points.