Factbox: What Trump’s taxes are reported to show   by Pete Schroeder,Reuters•September 28, 2020 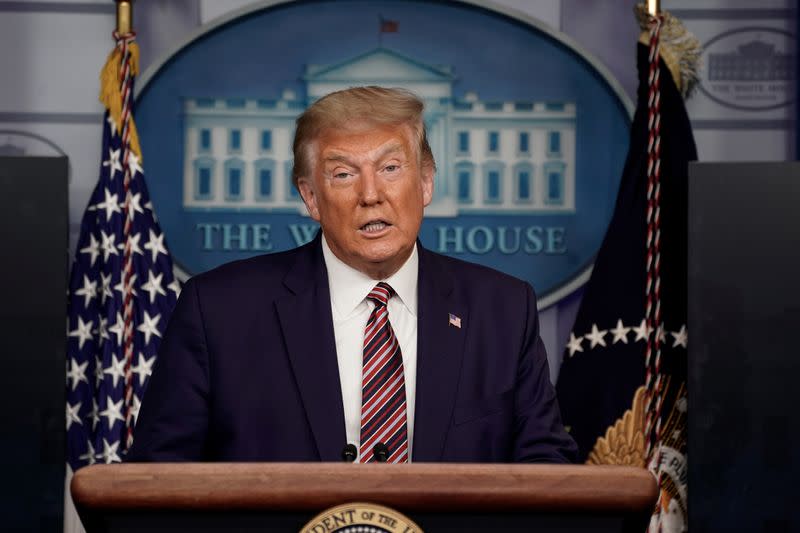 U.S. President Trump speaks to reporters during a news conference By Pete Schroeder WASHINGTON (Reuters) – President Donald Trump has relied on heavy losses across his business empire to help nearly erase his federal income tax bill, according to a report on Sunday from The New York Times.Citing previously unseen tax-return data going back over 20 years, the Times shed new light on Trump’s finances. Trump dismissed the story as „fake news” at a news conference on Sunday. Here are some highlights:

Some of Trump’s most prominent real estate holdings have also been less than profitable, the Times reported. Trump reported losing over $315 million on golf courses since 2000, with much of that centered at Trump National Doral near Miami. The hotel he opened in the heart of Washington in 2016 has recorded over $55 million in losses.

The Times report also found that Trump has been feuding with the Internal Revenue Service for the last decade over a nearly $73 million tax refund he previously claimed. If the IRS were to prevail in its audit, which has seemingly stalled in recent years, Trump could be responsible for paying over $100 million to the government.

The Times found that a large amount of Trump’s profits came from selling Trump himself. It reported that the former reality television star reported making a combined $427.4 million from 2004 to 2018 by selling his name and image through various endorsements and licensing deals.

Trump has been aggressive in claiming certain business expenses that further shrank his tax bill, according to the Times. That includes $70,000 in hairstyling expenses tied to „The Apprentice,” his former television program, and classifying a New York property described by the Trump Organization as a family retreat as an investment property to write off millions in property taxes.

The Times reported that Trump appeared to be responsible for $421 million in loans coming due in the next four years.

For liberal America, it was a ceremony of unseemly haste to rank with Hamlet having to watch his mother marry his father’s murderer. Enough to make anyone mad.

Related: Trump has nominated Barrett to the supreme court – what happens next?

On a grey Washington day, Donald Trump stood in the White House Rose Garden and introduced Amy Coney Barrett as his next supreme court justice.

It followed hard upon, as Hamlet’s pal Horatio would say, the death of Ruth Bader Ginsburg. The liberal justice has not yet been buried. As Barrett noted, flags are still at half-staff.

But Ginsburg’s last request – that the next president decide her successor – was swept aside amid a pageant of giant US flags hanging from colonnades, resembling the day Ginsburg herself was nominated by Bill Clinton.

Nothing would stop Trump pressing ahead with what critics regard as a very American coup, played out in broad daylight just 40 days before an election, imposing rightwing minority rule for a generation.

What was not said at Saturday’s event was more important than what was. Trump did not say he is banking on Barrett to save his neck if he manages to push a close-run presidential election all the way to the court.

Nor, despite having promised in 2016 to appoint only “pro-life” judges, did he make any mention of abortion, made legal by the court in 1973, now more threatened than ever. Nor was there acknowledgment that Barrett would knock the court off balance: a 6-3 conservative majority handing down decisions on healthcare, gun rights and other issues, likely to be odds with public opinion.

Instead both Trump and Barrett, a former clerk for the late conservative justice Antonin Scalia, sold her as a devotee to the constitution who will prove Democrats’ worst nightmare during the confirmation process.

This was their pitch: brilliant at her job, brilliant in the domestic sphere, steeped in conservative values. A living repudiation of liberal feminist narratives about inequality at home and in the workplace. A throwing down of the gauntlet.

Praising Barrett as “towering intellect”, Trump said: “A very highly respected law professor at Notre Dame wrote to Justice Scalia with a one-sentence recommendation. ‘Amy Coney is the best student I ever had.’ That’s pretty good.”

He added: “If confirmed, Justice Barrett will make history as the first mother of school-age children to serve on the supreme court. That’s good!”

The guests stood and applauded.

In her own remarks, Barrett graciously began by paying tribute to Ginsburg: “She not only broke glass ceilings. She smashed them.”

Then she pivoted to humanising talk of her home life. “The president has asked me to become the ninth justice and, as it happens, I’m used to being in a group of nine: my family.”

Her husband, Jesse, and seven children, two of whom were adopted from Haiti, were sitting in the front row.

“While I am a judge, I’m better known back home as a room parent, carpool driver and birthday party planner. When schools went remote last spring, I tried on another hat: Jesse and I became co-principals of the Barrett e-learning academy.”

There was an echo, perhaps, of the moment Ginsburg told her Senate confirmation hearing that she had “read briefing books, opinion books, law reviews, but there is no book in the world that means as much” as one from her grandson.

Barrett continued: “I couldn’t manage this very full life without the unwavering support of my husband, Jesse. At the start of our marriage, I imagined that we would run our household as partners. As it has turned out, Jesse does far more than his share of the work. To my chagrin, I learned at dinner recently that my children consider him to be the better cook.”

Another reminder of Ginsburg, known to be a terrible cook.

Barrett fits perfectly with the claim of women who work at the White House and who told the Republican convention that Trump is, contrary to public perception, a champion of working mothers.

It was an impressive attempt to scramble assumptions and entangle progressives in arguments over the meaning of feminism. Conservatives, who have thrown in their lot with Trump because of judges as much as anything, were jubilant.

Carrie Severino, president of the Judicial Crisis Network, tweeted: “Wow. I had high expectations and I was so impressed by how charming and lovely Amy Coney Barrett is in person. She knocked it out of the park!”

But after Republicans’ refusal to grant Merrick Garland, Barack Obama’s nominee to the court, a hearing in 2016, Democrats intend to fight with everything they’ve got.

Trump said confidently: “Her qualifications are unsurpassed and her record is beyond reproach. This should be a straightforward and prompt confirmation, should be very easy. Good luck. It’s gonna be very quick. I’ll sure it’ll be extremely noncontroversial. We said that the last time, didn’t we?”

The quip was a bleak reminder of the ferocious battle over Trump’s previous nominee, Brett Kavanaugh, accused of sexual assault as a teenager. This confirmation process is likely to be even more divisive.

The president urged Democrats to provide “a respectful and dignified hearing” and the media to refrain from “personal or partisan attacks” – an audacious request from the creator of labels such as “Crooked Hillary” and “Sleepy Joe”.

Trump’s wife, Melania, watched from the front row, with Vice-President Mike Pence and his wife, Karen, and Attorney General Bill Barr. Scalia’s widow was also present, as was his son, Eugene Scalia, the labor secretary.

“His judicial philosophy is mine too,” Barrett said of her mentor. “A judge must apply the law as written. Judges are not policymakers.”

Scalia’s death in 2016 set in train events that some now see unfolding with tragic inevitability, possibly all the way to Scalia’s disciple sitting on the supreme court and ruling on this year’s election.

For democracy, murder most foul.