The first presidential debate got off to a bumpy start on Tuesday night, as President Trump repeatedly interrupted Joe Biden, who at one point told him to “shut up.”The candidates sparred over the Affordable Care Act, the Supreme Court and the COVID-19 pandemic. Trump interrupted and insulted Biden, attacking his education and saying that no one would attend his rallies.“Would you shut up, man?” Biden said.Moderator Chris Wallace struggled to keep control, pleading with Trump not to interrupt several times. At one point, Wallace also had a back-and-forth with Trump over Trump’s health care plan, which Wallace called “largely symbolic.”
“I guess I’m debating you, not him but that’s OK,” Trump said to Wallace. “I’m not surprised.”Biden attacked Trump’s handling of the pandemic, while Trump argued that Biden would shut down the economy.More to come… 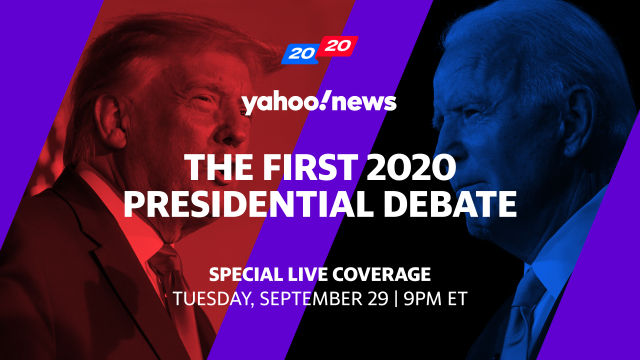 Scroll back up to restore default view.The first presidential debate of the 2020 election cycle is under way at Case Western Reserve University in Cleveland, where President Trump and former Vice President Joe Biden are meeting onstage for the first time. Fox News anchor Chris Wallace is serving as moderator. Yahoo News and other news media outlets, including the Associated Press, Reuters and USA Today, are providing a live fact check of the debate, highlighting select false, misleading or dubious claims made by the candidates in real time.

• Debate moderator and Fox News host Chris Wallace became impatient with President Trump and Democratic presidential nominee Joe Biden as the two men continued to talk over each other during a heated first presidential debate.

„Gentlemen, I hate to raise my voice, but why shouldn’t I be different than the two of you,” Wallace finally exclaimed.

• As Democratic presidential nominee Joe Biden and President Trump sparred over Trump’s tax returns and the U.S. tax code, Biden called Trump „the worst president America has ever had” while urging the president to „show us your tax returns.”

• Trump and Biden kicked off the debate with Trump talking over both his opponent and moderator Chris Wallace, with Biden eventually telling Trump to „shut up, man.”

• The debate is scheduled to last 90 minutes with no commercial breaks.

Fact check: Biden said that if the Supreme Court strikes down Affordable Care Act, 100 million Americans with pre-existing medical conditions could be disqualified from them from buying a health insurance policy or cause them to pay significantly higher premiums if Obama’s signature health law were overturned.

Trump is right. According to a 2017 government analysis recently cited by the New York Times, „as many as 133 million Americans — roughly half the population under the age of 65 — have pre-existing medical conditions.”

Fact check: President Trump has frequently claimed that he will always protect preexisting conditions, despite evidence to the contrary. He has even asserted falsely that he has “saved” such protections.

Democratic attacks on Republican efforts to repeal the health law and weaken preexisting condition protections proved successful in the 2018 midterms, when Democrats won back control of the House.

Forgoing the traditional pre-debate handshake because of COVID-19, President Donald Trump and former Vice President Joe Biden walked to their separate lecterns and briefly acknowledged each other.

Tonight may be the first time since George W. Bush’s funeral in 2018 that the two competitors have been in the same room. 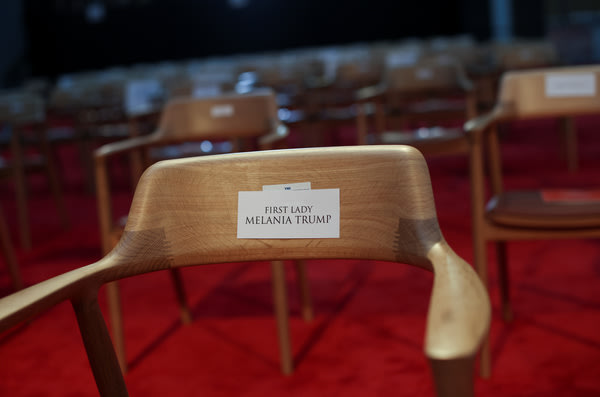 Joe Biden disembarks from his new campaign plane on Tuesday as he arrives for the first presidential debate in Cleveland. (Mike Segar/Reuters) 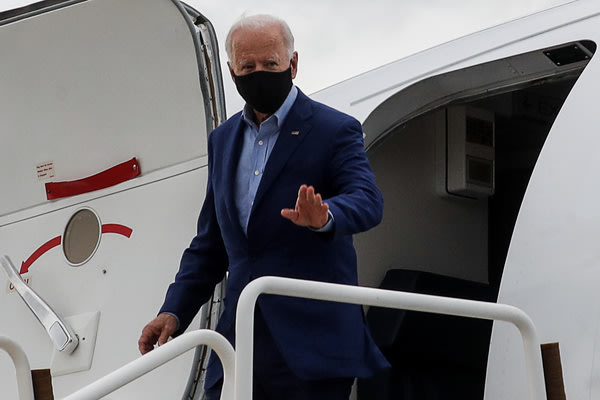 Even before Tuesday’s debate began, the Biden campaign was pushing back against a claim promoted by the Trump campaign that the former vice president wore an earpiece to receive prompts from aides during a recent town hall and would do so again in Cleveland.

There is no truth to those allegations, which according to USA Today, first appeared in a Facebook post after Biden’s appearance at a CNN town hall on Sept. 17, only to resurface Tuesday morning.

“Joe’s flesh colored earpiece was spotted at his last town hall,” claimed one Facebook meme. “Staffers can give him answers at the presidential debates.”

Videos of the town hall posted to YouTube show Biden’s head and ear much more clearly than the photos used in the Facebook memes. He does not appear to be wearing an earpiece.

“Of course he’s not wearing an earpiece,” Biden campaign manager Kate Bedingfield said Tuesday, adding that the Biden campaign “never asked for breaks” during the debate, another allegation that was floated by Team Trump. The president himself also repeatedly stated that he believed Biden would take performance-enhancing drugs ahead of Tuesday’s debate.

Biden mocked the Trump campaign’s conspiracy-mongering in a tweet before taking stage.