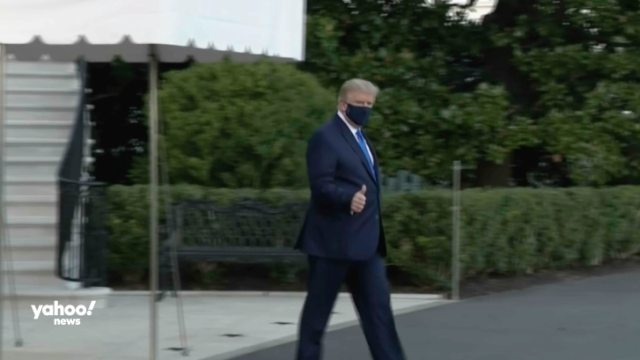 Scroll back up to restore default view.President Trump was taken to Walter Reed National Military Medical Center on Friday hours after he announced that he had tested positive for COVID-19, the disease caused by the coronavirus.The White House said in a statement that Trump was being taken to the hospital in Bethesda, Md., by helicopter as a “precautionary measure,” and the president was seen walking to Marine One. He is expected to stay there for a few days.“President Trump remains in good spirts, has mild symptoms, and has been working throughout the day,” the White House said in its statement. “Out of an abundance of caution … the President will be working from the presidential offices at Walter Reed for the next few days.”Before departing for the hospital, Trump recorded a video message, which he posted to his Twitter account.

“I want to thank everybody for the tremendous support. I’m going to Walter Reed hospital. I think I’m doing very well, but we’re going to make sure that things work out,” Trump said in the video. “The first lady is doing very well, so thank you very much, I appreciate it, I will never forget it. Thank you.”

Hours earlier, White House press secretary Kayleigh McEnany said that the president “remains fatigued but in good spirits” and had taken an experimental treatment of polyclonal antibodies made by the pharmaceutical manufacturer Regeneron as well as ulcer medication to suppress stomach acid. Trump, 74, is reported to be suffering from fever, chills, cough and congestion, and medical experts say that COVID-19 poses serious risks for the president.

The sudden developments have shaken Washington and the world. On Thursday, Trump had traveled to a closed-door fundraiser at his golf club in Bedminster, N.J., where he interacted with roughly 100 donors though he appeared tired. After leaving the event, he announced on Twitter that his senior adviser Hope Hicks had tested positive for COVID-19. A second tweet early Friday confirmed that he and first lady Melania Trump had also tested positive.

On Friday, others who had been in close contact with the president in recent days — including Sen. Mike Lee of Utah, Sen. Thom Tillis of North Carolina and University of Notre Dame president John Jenkins — announced that they had also tested positive for COVID-19. Three journalists who cover the White House also tested positive on Friday.

White House communications director Alyssa Farah said Friday that there had not been a transfer of power from Trump to Pence. “The president is in charge,” she told CBS News.

Trump’s son Eric offered his support of his father on Twitter as the news broke that the president, who refrained from tweeting for most of the day after announcing his positive test, was being taken to Walter Reed.

Ivanka Trump also sent her father a message on Twitter.

“You are a warrior and will beat this,” she wrote. “I love you dad.”

Late Friday, Joe Biden’s presidential campaign pulled all of its negative ads featuring Trump from the airwaves. The former vice president, who continued to campaign on Friday, also posted a call for Americans to rise above partisan politics.

“Although we’re in the midst of a big political fight, and we take that very seriously, we also want to extend our best wishes to the President of the United States, [and] the First Lady,” the statement read, adding “we’re all Americans and we’re all human beings and we want to make sure that everybody is healthy.”

Yet at approximately the same moment that Obama sent well-wishes to the Trumps, the president’s campaign fired off a fundraising email to supporters attacking his predecessor as “Lyin’ Obama” and mocking Biden as being “asleep in his basement.”