Hurricane Delta strengthens to Category 3 on US approach  by Leo MOUREN,AFP•October 9, 2020 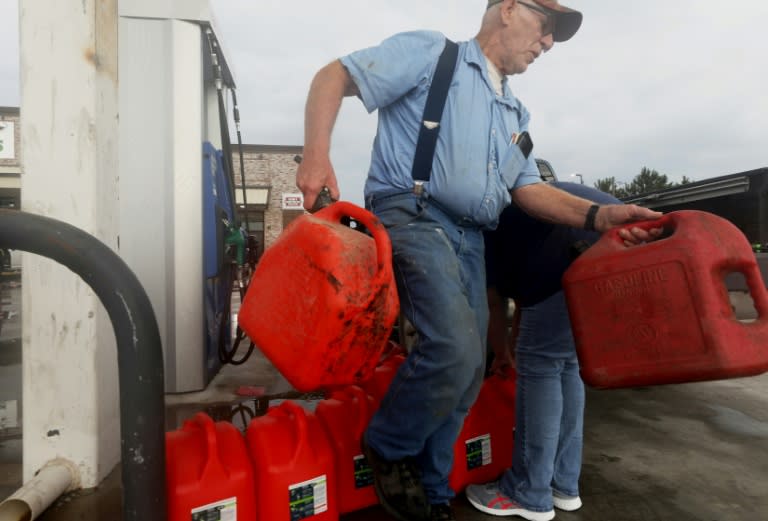 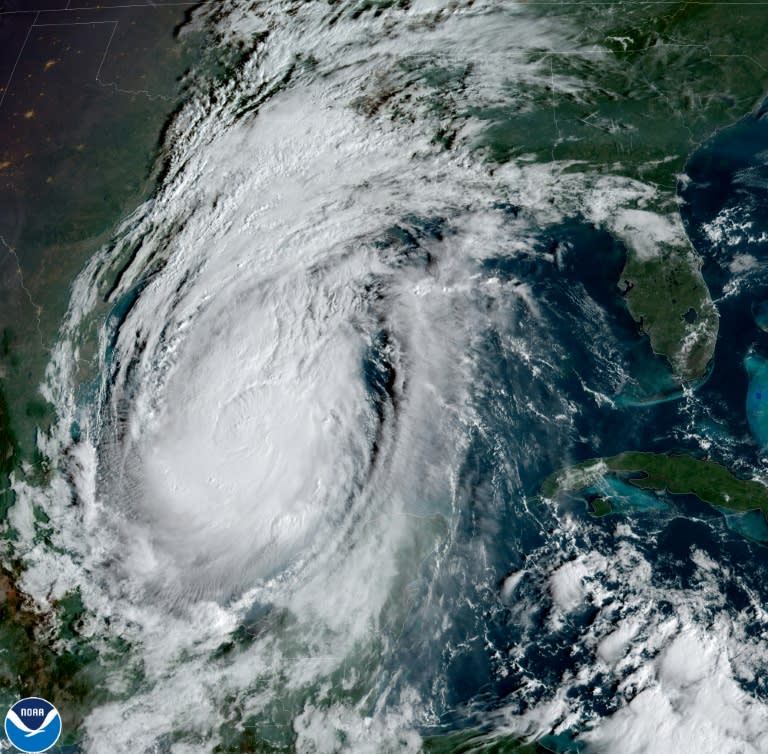 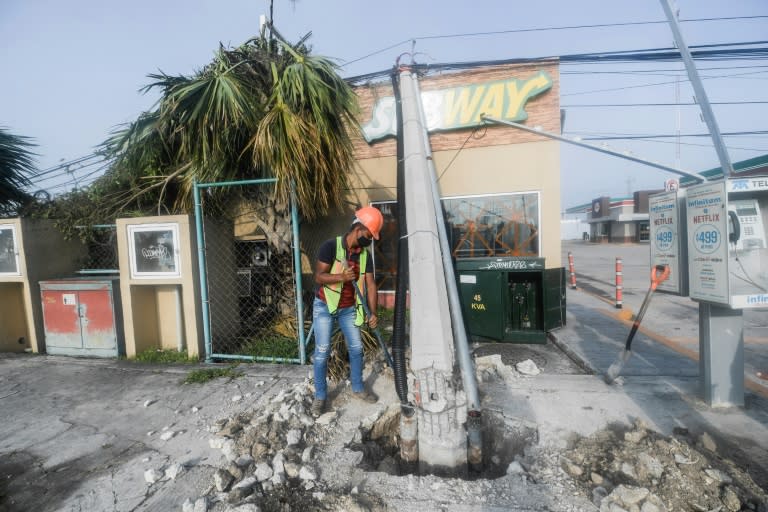 Hurricane Delta strengthens to Category 3 on US approach A man returns unfilled cans back to a truck after finding there was no gasoline left at a station in Lacassine, Louisiana as people prepare for Hurricane Delta on October 8, 2020Hurricane Delta gained strength Thursday as it churned across the western Gulf of Mexico towards the United States, threatening to batter part of the Louisiana coast still recovering from a separate storm just weeks ago.After lashing Mexico’s Caribbean coastline, Delta, now a Category 3 storm, is located 345 miles (555 kilometers) south of Louisiana and packing winds of 115 miles an hour, the US National Hurricane Center said in its 2100 GMT bulletinThe NHC warned that „life-threatening storm surge” was expected along portions of the northern Gulf Coast on Friday, where the storm is predicted to make landfall in the afternoon or evening.Delta had earlier slammed into the Yucatan Peninsula in southeast Mexico as a Category 2 storm, toppling trees and ripping down power lines.It weakened as it crossed the land, but gained strength again in the open waters of the Gulf.Mexico’s Yucatan region appeared to have escaped major destruction and there were no reports of deaths.- Battered US Gulf -Many along the Louisiana coastline have yet to recover from Hurricane Laura, which struck in late August as a strong Category 4 storm on the five-level Saffir-Simpson scale.Louisiana Governor John Bel Edwards urged residents to be extremely careful with Delta, and announced that 2,400 National Guard personnel had been mobilized to aid locals.In the city of Lake Charles, where torn planks of wood, uprooted trees and debris from Laura still litter the streets, Shannon Fuselier drilled plywood over the windows of a friend’s home as protection from flying debris.Many neighborhood houses are covered with tarps from previous hurricane damage, and the home Fuselier was working on had already suffered roof damage from a fallen tree and smashed windows during Laura.”The branches and leaves don’t do that much damage,” said Fuselier, 56. „It’s pieces of metal, steel, frames of other peoples windows, signs from people’s stores, nails.”Fuselier said that she was staying because she didn’t think the storm was strong enough for her to flee.Edwards has already warned that Delta could sweep up old debris and hurl it like a missile. Some 8,000 people were evacuated from the region when Laura struck, and on Thursday there was a traffic jam in both directions on the highway out of Lake Charles.Terry Lebine had already evacuated to the town of Alexandria, some 100 miles (150 kilometers) to the north, during the previous hurricane, and was ready to head out again.”It’s exhausting,” she told AFP. „…I’ve got my mother, she’s 81 years old and not in the best of health. Right after we went back home after Laura, we have to leave again for Delta. We were home a good 2-3 weeks.”Delta is the 26th named storm of an unusually active Atlantic hurricane season.As the ocean surface warms due to climate change hurricanes become more powerful — and scientists say there will likely be an increase in powerful Category 4 and 5 storms.cjc-bur/ch/

by Tim Fitzsimons and Phil Helsel and The Associated Press,NBC News•October 9, 2020 Video Not Available
Unfortunately, this video is not available in your region.
RS-100-20Hurricane Delta is gaining strength and size over the Gulf of Mexico as it takes aim for the Louisiana coast, which is still recovering from a powerful Category 4 storm six weeks ago that ripped houses from their foundations, peeled off roofs and tore trailers in half.Delta is expected to make landfall along the southwest Louisiana coast Friday afternoon or evening.Thursday afternoon the storm regained „major hurricane strength,” becoming a Category 3 storm, with maximum sustained winds of 115 mph, the National Hurricane Center said. It could strengthen further, but some weakening is expected as it approaches the U.S. coast.It will be the 10th hurricane to make landfall on the mainland U.S. this season, setting a new record.”We just can’t seem to get a break from the weather,” one Louisiana resident told NBC News.A video from a reconnaissance flight into the storm by the Air Force Reserve Hurricane Hunters showed dark, stormy skies stretching for miles on Thursday morning.The storm is churning toward the area around Lake Charles, which still has about 5,600 residents in New Orleans hotels because their homes are too damaged to occupy from Hurricane Laura in late August.Trees, roofs and other debris left in Laura’s wake still sit by roadsides waiting for pickup even as forecasters warned that Delta could be a larger-than-average storm.The large majority of structures damaged by Laura haven’t been permanently repaired, Gov. John Bel Edwards said on Wednesday.“All that debris could become missiles in really strong wind,” said Edwards, who also worried about the “sheer anxiety” the storm could cause residents who are already traumatized.NBC News correspondent Sam Brock reported Thursday afternoon that Interstate 10 west of Lake Charles was backed up for miles as residents evacuated the area, which is expected to get hit with tropical-storm force winds starting at about noon Friday.When the hurricane makes landfall later in the day, maximum sustained winds of 100 to 115 mph and life-threatening flooding are forecast.Forecasters at midday Thursday expanded the zone where a high storm surge is expected. Now, a large stretch of low-lying Louisiana, from Rockefeller Wildlife Refuge to Port Fourchon, including Vermilion Bay, could see coastal waters rise by 7 to 11 feet.Four million people from coastal Louisiana up through central Mississippi are under flash flood watches.The storm’s slight western shift may have spared the Alabama coast from a direct hit, as that state continues to recover from Hurricane Sally.Delta first struck Mexico’s Yucatan Peninsula on Wednesday as a Category 2 storm, forcing tourists in the area’s resorts to hunker down.It then weakened slightly before moving north over the Gulf of Mexico, where it strengthened again to a Category 2, and then to a Category 3 Thursday.Some weakening is anticipated as the hurricane approaches the U.S. Gulf Coast, forecasters said.At 7 p.m. local time Thursday (8 p.m. ET), the center of the hurricane was about 310 miles south of Cameron, Louisiana, and was moving north-northwest at 12 mph, the National Hurricane Center said.A hurricane warning is in effect for a stretch of coast from High Island, Texas, to Morgan City, Louisiana.Tropical-storm warnings are in effect to the west and east — from Sargent, Texas, to High Island, and from Morgan City, Louisiana, east to the mouth of the Pearl River, including New Orleans and Lake Pontchartrain. Tropical-storm watches are in effect from the Pearl River east to Bay St. Louis in Mississippi.The governors of Louisiana, Alabama and Mississippi declared states of emergencies, and on Wednesday President Trump approved Louisiana’s request for a federal emergency declaration.In addition to the wind, storm surge and other effects, the hurricane is expected to dump 5 to 10 inches of rain, with isolated totals of up to 15 inches, from southwest to south-central Louisiana, forecasters said. That will cause flash flooding and river flooding, the hurricane center said.