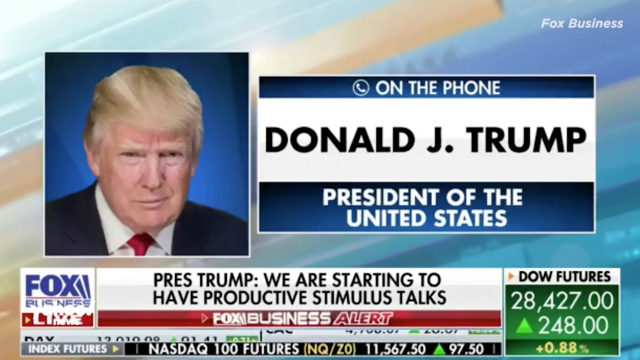 Scroll back up to restore default view. President Trump on Thursday attacked two of his closest associates for not doing enough to bring down his political opponents, as he continues to pursue his obsession with the 2016 election.In a wide-ranging, 55-minute interview with Fox Business host Maria Bartiromo, Trump criticized Attorney General William Barr for not arresting enough Democrats and Secretary of State Mike Pompeo for not finding Hillary Clinton’s emails from her tenure as secretary of state, which the president believes are somewhere inside the State Department.“They’re in the State Department, but Mike Pompeo has been unable to get them out, which is very sad, actually,” Trump said. “I’m not happy about him for that reason. He was unable to get them out. I don’t know why. You’re running the State Department, you get them out.”In addition, he attacked FBI Director Christopher Wray for not investigating his claims of widespread voter fraud.The live telephone interview was the president’s first since his release from Walter Reed National Military Medical Center, where he was treated after falling ill from the coronavirus.Trump said Wray wasn’t doing his job by failing to investigate voter fraud after the FBI director said there is no evidence to substantiate the president’s obsession with the issue, which election officials unanimously agree is not a problem in national elections.“He’s been disappointing,” Trump said. “He doesn’t see the voting ballots as a problem.”Last month, Wray told Congress that the bureau has “not seen, historically, any kind of coordinated national voter fraud effort in a major election, whether it’s by mail or otherwise.”

President Trump, Attorney General William Barr and FBI Director Christopher Wray. (Photo illustration: Yahoo News; photos: AP, Bill Pugliano/Getty Images)And in his sharpest criticism of Barr to date, Trump said that history would look poorly on the attorney general if he fails to prosecute Clinton and other members of the Obama administration for alleged crimes, including “spying” on his 2016 campaign. Members of the Trump campaign were investigated by the FBI over allegations of suspicious ties to Russia, an investigation that morphed into the probe by special counsel Robert Mueller. Mueller found no evidence of collusion between the campaign and Russia. There is no evidence in the public record to show that the Obama administration was gathering intelligence on Trump or that it used any information gathered by the FBI to help the Clinton campaign.
“Bill Barr is going to go down as either the greatest attorney general in the history of the country or he’s going to go down as, you know, a very sad situation,” Trump said. “I’ll be honest with you. He’s got all the information he needs. They want to get more, more, more. They keep getting more. I said, ‘You don’t need any more.’”

Last year, Barr tapped U.S. Attorney John Durham to investigate the origins of the 2016 FBI investigation. There has been no indication from the Justice Department as to when findings of the probe will be unveiled.

In a flurry of tweets and retweets Wednesday, Trump wondered aloud about the status of the investigation.

“Where are all of the arrests?” he tweeted. “Can you imagine if the roles were reversed? Long term sentences would have started two years ago. Shameful!”

“NOW THAT THE RADICAL LEFT DEMOCRATS GOT COUGHT [sic] COLD IN THE (NON) FRIENDLY TRANSFER OF GOVERNMENT, IN FACT, THEY SPIED ON MY CAMPAIGN AND WENT FOR A COUP, WE ARE ENTITLED TO ASK THE VOTERS FOR FOUR MORE YEARS,” Trump continued. “PLEASE REMEMBER THIS WHEN YOU VOTE!”

“DO SOMETHING ABOUT THIS,” the president fumed in another tweet. “THE BIGGEST OF ALL POLITICAL SCANDALS (IN HISTORY)!!! BIDEN, OBAMA AND CROOKED HILLARY LED THIS TREASONOUS PLOT!!! BIDEN SHOULDN’T BE ALLOWED TO RUN – GOT CAUGHT!!!”