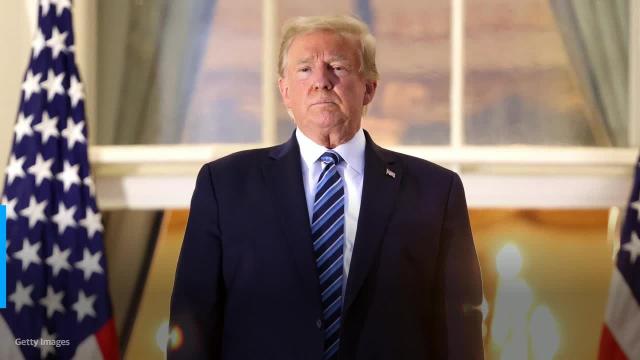 Trailing badly in new national polls, President Trump tried out an audacious new appeal to voters during his epic live-tweeting on Monday of the Supreme Court confirmation hearing for Amy Coney Barrett: Parts of America are “going to hell: Vote Trump!”Trump, who has often derided Democratic-run states, singled out three of them as particularly deplorable.

Together, California, New York and Illinois account for 20 percent of the U.S. population. All of them, and the largest cities within them, are led by Democrats.

Trump’s partisan parsing of the country is nothing new. On Sept. 16, two weeks before he announced that he had contracted COVID-19, Trump qualified the number of infections and deaths from the disease in the U.S. by saying “that’s despite the fact that the blue states had tremendous death rates. If you take the blue states out, we’re at a level that I don’t think anybody in the world would be at.”

Since being elected in 2016, Trump has regularly sought to divide the nation in terms of political ideology, and in the wake of the killing of George Floyd by Minneapolis police, he shifted the focus of his reelection campaign to preserving “law and order.” At a time when the coronavirus pandemic was worsening across the country, and the U.S. economy had shed millions of jobs, Trump promoted dubious claims to draw attention to rising crime rates.

“You hear about certain places like Chicago and you hear about what’s going on in Detroit and other — other cities, all Democrat run,” he told reporters on June 24. “Every one of them is Democrat run. Twenty out of 20. The 20 worst, the 20 most dangerous are Democrat run.”

On Aug. 15, he retweeted Republican activist Brandon Straka, who had written that America should “Leave Democratic cities. Let them rot.”

In a tweet two weeks later, Trump again sought to identify the Democratic Party with crime itself.

Trump’s attacks on Democratic-led cities and states are a continuation of his message from the 2016 campaign, except that then he also blamed the Obama administration. Pressed in an interview that year with Bill O’Reilly what he would do about urban crime and deep mistrust of police among some residents of places like Chicago, Trump conceded that as president he would really only be able to “be a cheerleader” for law enforcement. Yet even the year after being elected, Trump claimed that the violence in Chicago was “easily fixable” were it not for the “political correctness” of liberal politicians.

Trump has on many occasions drawn a distinction between the parts of the country that support him and those that don’t, affording his opponent, Joe Biden, an opening to vow that he will be president “for all Americans.”

Short of an unprecedented political realignment in states like California, New York and Illinois, Trump’s theory that all inner-city problems would disappear if only Democrats were replaced by Republicans and America let police do their job without interference is unlikely to be put to the test.But the evidence is already in, from the president’s own mouth, about the Trump administration’s record of imposing law and order over the four years it has been in power. 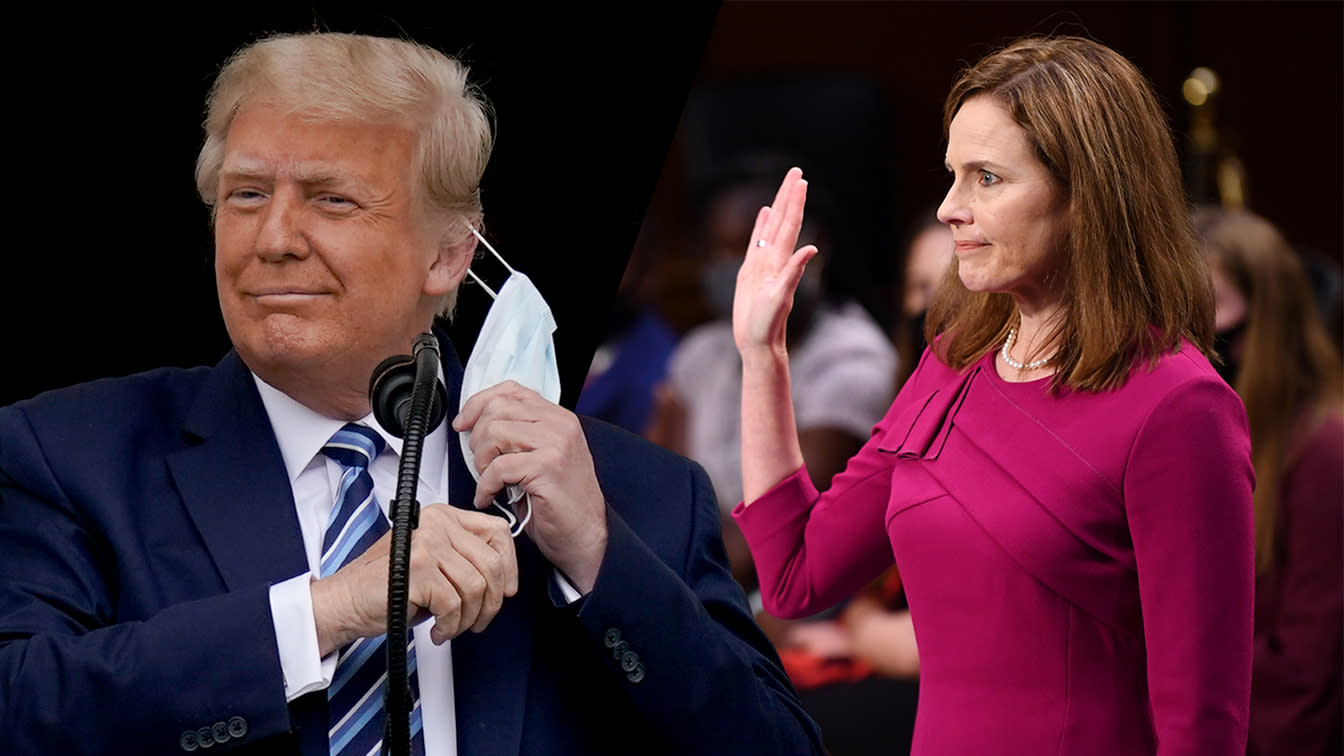 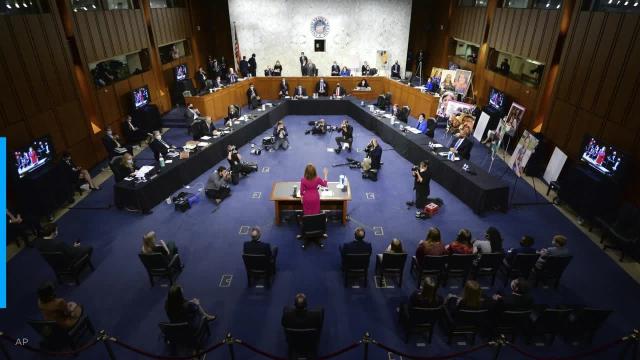 As the Senate begins confirmation hearings for Supreme Court nominee Amy Coney Barrett, two-thirds of voters say Congress should focus instead on passing more COVID-19 relief for struggling workers and businesses, according to a new Yahoo News/YouGov poll.The survey, which was conducted from Oct. 9 to 11, found that large majorities of the public think Congress has its priorities backward. Not only do more than three-quarters (77 percent) of registered voters want legislators to approve another major pandemic relief package; 66 percent want the Senate to vote on it before voting on Barrett’s nomination. A full third of Republicans (33 percent) agree.In contrast, negotiations over a new round of stimulus funds remain at a partisan impasse while the Republican-controlled Senate plows ahead with its plan to install Barrett on the court before the Nov. 3 election — even though at least two GOP members of the Senate Judiciary Committee, Utah’s Mike Lee and North Carolina’s Thom Tillis, have tested positive for COVID-19 in recent days.

President Trump and Supreme Court nominee Amy Coney Barrett. (Photo illustration: Yahoo News; photos: Alex Brandon/AP, Kevin Dietsch/Pool via Reuters)In response, a majority of registered voters (54 percent) say in-person hearings should be delayed. Only 36 percent say the opposite. The consensus around Congress’s misplaced priorities reflects the deepening influence of COVID-19 on the final days of the 2020 election. While slightly more voters blame Democratic House Speaker Nancy Pelosi (43 percent) than President Trump (40 percent) for Washington’s continuing failure to agree on a relief bill, that dynamic has in no way boosted Trump. On the contrary, Trump continues to trail Democratic nominee Joe Biden by 8 percentage points among likely voters (43 percent to 51 percent) in large part because they have taken an even dimmer view of the president’s leadership on COVID-19 in the wake of his own recent hospitalization and the broader White House outbreak that has left dozens infected.For instance, a clear majority of voters (57 percent) now agree with the following assessment: If those in and around the Trump White House “can’t protect themselves from the virus, how can they protect America?” Most (53 percent) also say they trust the administration less on COVID-19 because of the White House outbreak. And even though 42 percent agree that it “goes to show anyone can get COVID-19 and it’s no big deal” — something that the families of the 215,000 Americans killed by the virus would likely take issue with — a much larger number (58 percent) disagree with that claim. As a result, Biden’s lead on the question of who would do a better job handling the pandemic has doubled from 7 points (45 percent to 38 percent) to 14 points (48 percent to 34 percent) over the last week. Meanwhile, voter approval of Trump’s COVID-19 response has fallen from 43 percent to 40 percent, with 56 percent saying they disapprove.  Trump’s own behavior since returning from Walter Reed National Military Medical Center has contributed to this decline. In last week’s Yahoo News/YouGov poll, which was conducted immediately after the president’s diagnosis, a little more than half (54 percent) of voters believed that his illness would have no effect on his approach to the pandemic, which has been to minimize the need for precautions. Now that Trump has spent his first week back in the White House dismissing the dangers of the virus and proclaiming that he feels better than he did 20 years ago, nearly three-quarters (73 percent) are convinced he won’t change.The problem is that most voters seem to wish he would. Asked about things Trump has done before and since returning to the White House, sizable majorities disapproved: of his decision to greet supporters outside the hospital by riding in an armored car with Secret Service agents (61 percent inappropriate vs. 29 percent appropriate); of his decision to leave the hospital and return to the White House while still undergoing treatment for COVID-19 (53 percent inappropriate vs. 35 percent appropriate); of his decision to remove his mask in front of TV cameras upon his return to the White House (55 percent inappropriate vs. 34 percent appropriate); and of his decision to immediately hold in-person campaign events (58 percent inappropriate to 28 percent appropriate).

Overall, 63 percent of registered voters now say Trump has not been wearing a mask and social distancing appropriately, up from 59 percent last week. Similar majorities say the president is endangering those around him (56 percent) and continues to face a very or somewhat serious “risk of severe illness or even death from COVID-19” (55 percent), despite his claims of recovery. With Trump’s first post-COVID-19 rally scheduled for Monday night in Florida, 62 percent say it’s inappropriate for him to hold crowded campaign rallies during the pandemic and 54 percent think he should suspend in-person rallies for the rest of the campaign. A Trump comeback is still possible, but time is running out. With Election Day three weeks away, 17 percent of registered voters say they have already cast their ballots — up from 10 percent one week before, 6 percent earlier that same week and just 1 percent in late September. Among these voters, Biden is beating Trump by 47 points (70 percent to 23 percent); Trump leads among those planning to vote on Election Day, but by a smaller margin of 67 percent to 26 percent. And while the former vice president has been banking early votes, the number of Biden and Trump voters who say they could still change their minds fell from 6 percent a week ago to 3 percent today. Including undecideds (6 percent), that leaves just 9 percent of voters up for grabs. Trump would have to win nearly all of America’s few remaining persuadable voters to close the gap with Biden. Perhaps reflecting the electoral challenges facing the president, a plurality of registered voters now predict for the first time since July that Biden (44 percent) rather than Trump (40 percent) will win in November.  The Yahoo News survey was conducted by YouGov using a nationally representative sample of 1,525 U.S. registered voters interviewed online from Oct. 9 to 11. This sample was weighted according to gender, age, race and education based on the American Community Survey, conducted by the U.S. Bureau of the Census, as well as 2016 presidential vote, registration status, geographic region and news interest. Respondents were selected from YouGov’s opt-in panel to be representative of all U.S. registered voters. The margin of error is approximately 4.3 percent. 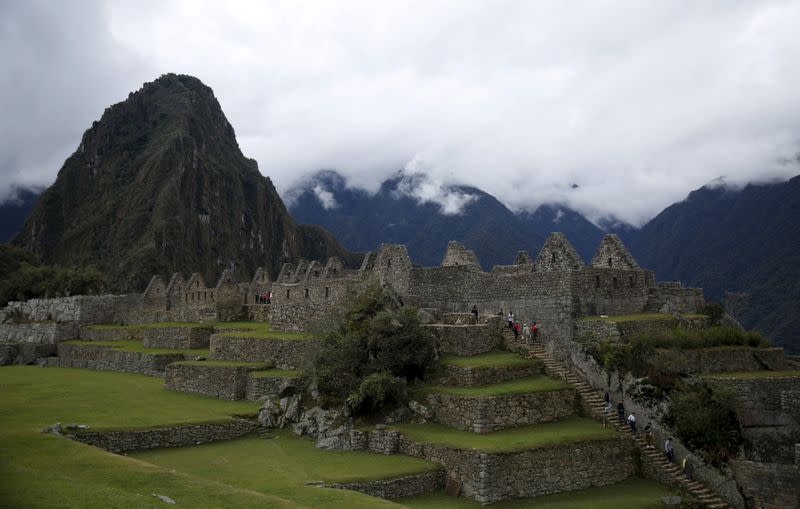 Peru opens Machu Picchu for a single Japanese tourist after almost seven-month waitLIMA (Reuters) – Peru opened the ruins of Machu Picchu for a single Japanese tourist after he waited almost seven months to enter the Inca citadel, while trapped in the Andean country during the coronavirus outbreak.Jesse Takayama’s entry into the ruins came thanks to a special request he submitted while stranded since mid-March in the town of Aguas Calientes, on the slopes of the mountains near the site, said Minister of Culture Alejandro Neyra on Monday.”He had come to Peru with the dream of being able to enter,” Neyra said in a virtual press conference. „The Japanese citizen has entered together with our head of the park so that he can do this before returning to his country.”

Takayama, his entry ticket on hand since March, entered the ruins of the citadel built more than 500 years ago on Saturday, and became the first visitor in seven months to be able to walk through the world heritage site. His original plan had been to spend only a few days in Peru to take in Machu Picchu.

„This is so amazing! Thank you!” said Takayama in a video recorded on the top of Machu Picchu mountain.

Minister Neyra said that in November the stone ruins of Machu Picchu will be reopened for national and foreign tourists, without specifying the date. The site will permit 30% of its normal capacity of 675 people per day.

„We are still in the middle of a pandemic,” Neyra said. „It will be done with all the necessary care.”