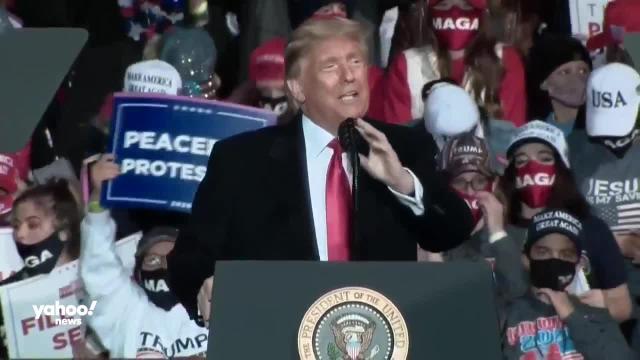 Four years ago, Donald Trump became the first Republican since 1988 to win Pennsylvania in a presidential election. With polls showing him lagging behind Democratic nominee Joe Biden in the state, he returned there Tuesday night to make his pitch to voters in Johnstown.“Twenty-one days from now we’re going to win the commonwealth of Pennsylvania and we’re going to win four more years in the White House,” President Trump said to open his remarks.The president attacked Biden’s long tenure as a senator, saying his votes had hurt the state’s economy, and painted him as being a puppet of the “radical left.” “He’s shot, folks,” Trump said of Biden. “I’m running against the single worst candidate in the history of presidential politics, and you know what that does? It puts more pressure on me.”Trump was also critical of Biden for wanting to ban fracking, an important industry in many areas of the state, which the former vice president has said he would not do, adding that “Democrats hate clean, beautiful coal.” A CBS News poll in August found that 52 percent of Pennsylvania residents opposed fracking, versus 48 percent who were in favor.

Trump tosses face masks into the crowd as he arrives for a campaign rally on Tuesday in Johnstown, Pa. (Evan Vucci/AP)Trump returned to the campaign trail on Monday night in Florida, his first event after being hospitalized for COVID-19 earlier this month. As he did in Orlando the prior night, Trump said he was immune from the disease and joked that he would kiss members of the audience. He also stated that a vaccine would be available soon, contradicting the head of the Centers for Disease Control and Prevention.The president is set to visit Iowa and North Carolina in addition to making a return visit to Florida later this week. Both Trump and Vice President Mike Pence have made frequent stops in the Keystone State over the last two months.“With me, you’re going to frack,” Trump promised, to chants of “Four more years” and “We love you” from the crowd.Johnstown is located in Cambria County, which has seen a large swing in the last three presidential elections, with Republicans going from 48 percent of the vote in 2008, when Barack Obama won the county over John McCain, to Trump winning 66 percent of the vote eight years later.Trump won the Keystone State by just 44,000 votes in 2016 after final polls showed him trailing Hillary Clinton by roughly 2 points going into election night. With a few weeks until Election Day but with some Pennsylvanians already voting early, Biden currently has a 7-point lead in the RealClearPolitics polling average. The Trump campaign is looking to turn out more infrequent voters, as they did in 2016, making up for his sinking numbers among senior citizens and suburban residents. Without winning Pennsylvania, the path to 270 electoral votes becomes difficult if not impossible for the incumbent.“Suburban women, will you please like me?” Trump asked at one point, stating that he would keep low-income housing out of their neighborhoods. “We saved your damn neighborhood.”

Joe Biden speaks in Johnstown, Pa. (Andrew Harnik/AP) The president’s visit to Johnstown comes two weeks after Biden visited during a train tour of southern Pennsylvania. Democrats in the state say that the Clinton campaign’s major mistake four years ago was putting all of their focus into the urban centers of Philadelphia and Pittsburgh while ignoring the reset of the state, allowing Trump to flip some mid-size counties and run up large margins in the smaller ones.Democratic Lt. Gov. John Fetterman joined Biden in Johnstown and stressed the importance of the party campaigning everywhere to Yahoo News.“I can’t tell you what it meant for folks to see the vice president in counties where they feel like they don’t have a voice, where it doesn’t matter,” Fetterman said. “It’s very easy to have a media outlet tar you as elite or stuck up when all you do is have fundraisers in urban areas, but when you’re actually out there in these small counties, it really matters and it helps energize and inspire Democrats, not just those otherwise malleable folks. “On Saturday, Biden made a stop in Erie, a county that flipped from Obama to Trump but where Democrats are redoubling their efforts this fall. The former vice president has also recently visited Gettysburg and is set to hold a televised town hall in Philadelphia on Thursday. Biden also has a key advantage in the northeast of the state, which saw a big shift toward Trump in 2016: He hails from the area.Pennsylvania media markets have already seen a deluge of political commercials and can expect more between now and Election Day. According to tracking from Advertising Analytics, Democrats spent more than $50 million in the state from Sept. 1 to Oct. 13 for presidential campaign ads, with Republicans topping $25 million over the same period.  The money is expected to continue pouring in: The Biden campaign and allied groups have reserved nearly $35 million in airtime between now and Election Day, versus $16 million from the Trump campaign and allied groups.