Trump hits Biden over unverified report on his son Hunter 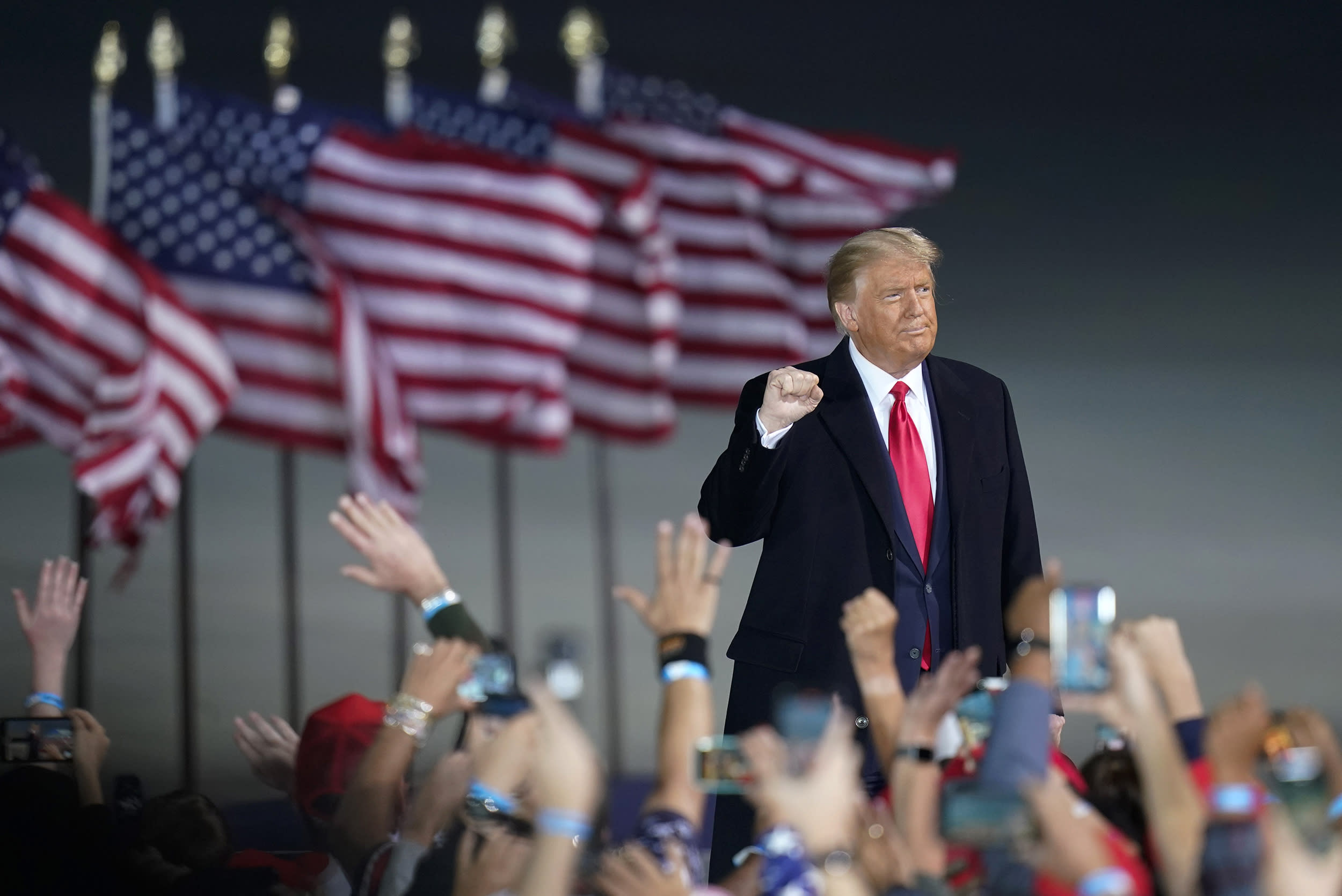 President Donald Trump on Wednesday seized on an unverified report about Joe Biden’s son Hunter, using it to repeat his often-told conspiracy theory surrounding Ukrainian energy company Burisma.At a rally in Des Moines, Iowa, Trump referred to what he called „explosive documents” published Wednesday by the New York Post.Trump claimed the report shows „Joe Biden has been blatantly lying about his involvement in his son’s corrupt business dealings.” In a phone interview with conservative news outlet Newsmax, Trump said „they’re crooks.”The New York Post cited an alleged email that reportedly came from a copy of a hard drive. NBC News has not verified the report or seen the email.There has been no evidence of wrongdoing on the part of either Biden, something highlighted by the Democratic presidential nominee’s campaign spokesman Andrew Bates on Wednesday.”Investigations by the press, during impeachment, and even by two Republican-led Senate committees whose work was decried as ‘not legitimate’ and political by a GOP colleague have all reached the same conclusion: that Joe Biden carried out official U.S. policy toward Ukraine and engaged in no wrongdoing. Trump Administration officials have attested to these facts under oath,” Bates said in a statement.”The New York Post never asked the Biden campaign about the critical elements of this story. They certainly never raised that Rudy Giuliani — whose discredited conspiracy theories and alliance with figures connected to Russian intelligence have been widely reported — claimed to have such materials,” Bates added.”Moreover, we have reviewed Joe Biden’s official schedules from the time and no meeting, as alleged by the New York Post, ever took place.”
Senior Writer,Yahoo News•October 13, 2020

Trump presses attack on Fauci in dispute over quote in campaign ad.

President Trump pressed his attack on Dr. Anthony Fauci on Tuesday, after his campaign declined to take down an ad quoting the country’s leading infectious disease expert that Fauci himself said was misleading.In the campaign ad released last week, Fauci is quoted as saying, “I can’t imagine … that anybody could be doing more,” with the context of the ad making it seem as if he was praising Trump’s response to the coronavirus pandemic. The longtime head of the National Institute of Allergy and Infectious Diseases  issued a statement asking for the ad to be taken down. “The comments attributed to me without my permission in the GOP campaign ad were taken out of context from a broad statement I made months ago about the efforts of federal public health officials” — not about Trump, specifically, he said.“In my nearly five decades of public service, I have never publicly endorsed any political candidate,” Fauci emphasized.The Trump campaign has refused to remove the ad, and the president pushed back further on Tuesday morning.“Actually, Tony’s pitching arm is far more accurate than his prognostications,” Trump tweeted, referencing Fauci’s wildly inaccurate first pitch at the Washington Nationals’ season opener in July, adding, “‘No problem, no masks’. WHO no longer likes Lockdowns – just came out against. Trump was right. We saved 2,000,000 USA lives!!!”Fauci, along with many other public health experts, did not initially recommend universal mask use due to concerns about the supply for frontline workers, and before researchers recognized the prevalence of asymptomatic transmission.“I don’t regret anything I said then because in the context of the time in which I said it, it was correct. We were told in our task force meetings that we have a serious problem with the lack of PPEs and masks for the health providers who are putting themselves in harm’s way every day to take care of sick people,” Fauci said in July, adding, “When it became clear that the infection could be spread by asymptomatic carriers who don’t know they’re infected, that made it very clear that we had to strongly recommend masks. And also, it soon became clear that we had enough protective equipment and that cloth masks and homemade masks were as good as masks that you would buy from surgical supply stores. So in the context of when we were not strongly recommending it, it was the correct thing. But our knowledge changed and our realization of the state of the outbreak changed.”

Fauci told the Daily Beast of the ad, “By doing this against my will they are, in effect, harassing me. Since campaign ads are about getting votes, their harassment of me might have the opposite effect of turning some voters off.”

The quote used in the ad is taken from a March interview with Fox News. The full context makes it clear Fauci is talking about the national response.

“I, as one of many people on a team, I’m not the only person, since the beginning when we even recognized what this was, I have been devoting almost full-time on this. I’m down at the White House virtually every day with the task force,” Fauci said at the time. “I’m connected by phone throughout the day and into the night, and I’m talking 12, 1, 2 in the morning. I’m not the only one. There’s a whole group of us that are doing that, it’s every single day.

“So I can’t imagine that under any circumstances that anybody could be doing more,” Fauci concluded.

The Trump administration has been criticized for its response to the virus, which has killed more than 215,000 Americans. Trump consistently downplayed the virus in public despite private comments about its dangers while failing to ramp up testing because he believed more tests meant more positive cases, which made him look bad. Trump has resumed holding rallies despite cases beginning to rise and the fact that he himself was just released from the hospital following a COVID-19 diagnosis.

“I think it’s really unfortunate and really disappointing that they did that. It’s so clear that I’m not a political person, and I have never ― either directly or indirectly ― endorsed a political candidate,” Fauci told CNN on Monday. “And to take a completely out-of-context statement and put it in what is obviously a political campaign ad, I thought was really very disappointing.”

Fauci will be joining Yahoo News on Thursday at 8 a.m. ET for a live interview. Tune in here.

Joe Biden’s son-in-law Howard Krein is an informal adviser to the Democratic presidential candidate on the response to the coronavirus pandemic, while simultaneously investing in health-care startups to address the pandemic, Politico reported on Tuesday.

Krein’s venture capital business, StartUp Health, announced in April that it would invest in ten medical startup companies that craft solutions to issues posed by the pandemic. At the same time, Krein was among several individuals speaking with the Biden campaign regarding its health policy.

The initiative by StartUp Health was dubbed the “Pandemic Response Health Moonshot,” language that echoes Biden’s own “Cancer Moonshot” project from his last year in the Obama administration.

Krein’s position raises questions about a possible conflict of interest for the Biden campaign. A campaign official confirmed to Politico that Krein was an informal adviser who has participated in calls with the candidate on pandemic response.

“I have little doubt that the relationship to Joe Biden, particularly if he becomes president, would attract the interest of some investors,” Avik Roy, founder of investment firm Roy Healthcare Research, told Politico. Roy is a former adviser to Senators Marco Rubio (R., Fla.) and Mitt Romney (R., Utah).

The news follows a series of disclosures detailing that Biden’s son Hunter pursued while his father was serving as vice president. According to a Senate Intelligence Committee report released in September, “Hunter Biden received millions of dollars from foreign sources as a result of business relationships that he built during the period when his father was vice president of the United States and after.”

In particular, Hunter Biden and his business partner Devon Archer engaged in monetary transactions with Ye Jianming, a Chinese businessman with connections in the Communist Party and People’s Liberation Army. Archer was convicted of defrauding a Native American tribe in 2018, and has a sentencing hearing scheduled for this coming January.

Gov. Jay Inslee announced Tuesday five counties east of the Cascade Mountains — Benton, Chelan, Douglas, Franklin and Yakima — will advance to the second phase in his four-part reopening plan. It’s the first major change since he paused counties’ advancement through the phases this summer.

Throughout the country, however, infections are rising again, sparking fears that a forewarned wave of infections this fall and winter has begun.

Throughout Wednesday, on this page, we’ll post updates on the pandemic and its effects on the Seattle area, the Pacific Northwest and the world. Updates from Tuesday are here, and all our coronavirus coverage can be found here.