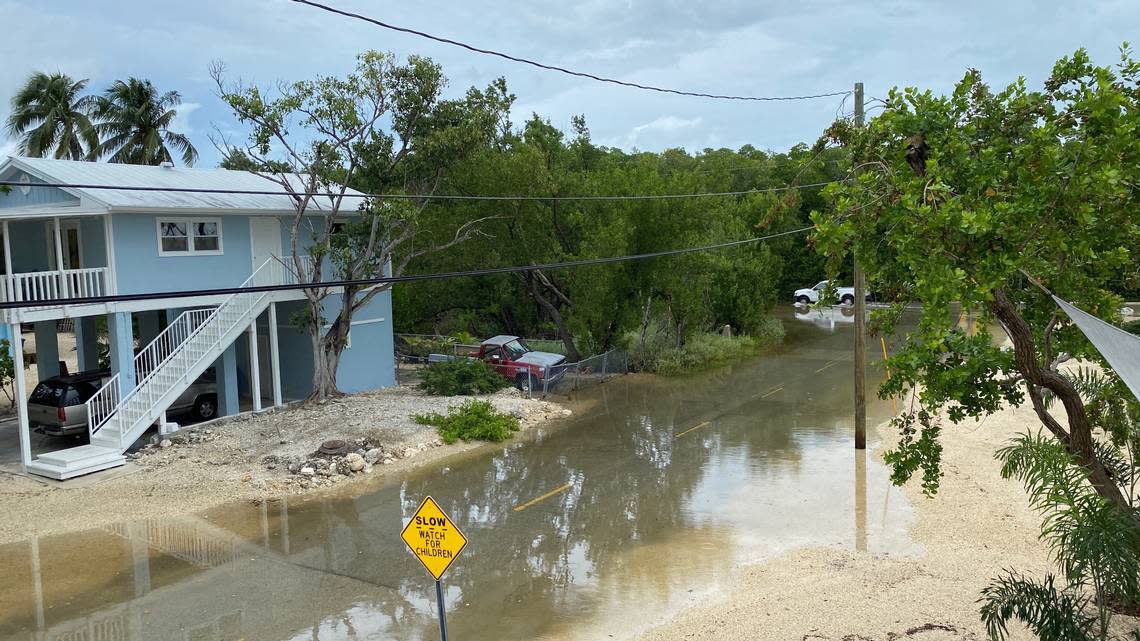 Many South Floridians might have woken Friday morning to the sound of classic rocker Bob Seger’s famous song’s refrain: “woke last night to the sound of thunder” as an ear worm.  That’s because nature provided plenty of percussive accompaniment as thunderstorms swept through parts of Miami-Dade and Broward, dumping up to 2 inches of rain and leading to a flood advisory from the National Weather Service in Miami.
King tides merged with rain The flood chances are boosted with help from the coinciding highest king tides of the year. The current wave of king tides started Wednesday and runs through runs a week until October 21, according to NOAA. Friday morning’s high tide was its peak and was joined by the passing downpours.“Tides are currently running .6 ft above NOAA predicted peaks, which (if that stays consistent) should result in a maximum king tide around 1.7 FT NAVD,” Alan Dodd, Miami’s chief resilience officer, wrote in an email to the Miami Herald.The National Weather Service said the following areas could experience flooding: Miami, Coral Gables, Sweetwater, Doral, West Miami, El Portal, Hialeah, Hialeah Gardens, Medley, Opa-locka, West Park, Miami Springs, Miami Shores, Miami Gardens, Miami Lakes, North Miami, North Miami Beach, Aventura, Miramar and Hallandale.The Florida Keys is also feeling the intersection of rains — a steady 60% chance this weekend — and high tides.“Across the Middle and Upper Keys, minor saltwater flooding will be most pronounced around the time of high tide. For the Bayside communities of the Upper Keys, water levels will tend to stay high, with little to no relief at low tide,” the National Weather Service said in its coastal flood statement for Monroe County.Two disturbances in the Atlantic have a low chance of development, forecasters say

What to expect on the weekend

The flood advisory lasts through Saturday. Rain chances are at 70% Friday before declining at night and picking up a bit Saturday and Sunday with chances between 30% and 40%.

Rain chances for South Florida then settle in the 30% range through Thursday. The Keys are looking to be a bit wetter, running 50% and 40% for much of the week.

Look for highs in the mid-80s and lows around 78 degrees.

Forecasters say a pattern change is coming for western Europe that will send stormy conditions into the region by early next week.

Following a dry weekend across much of western Europe, the first of several storms will approach from the North Atlantic Ocean.

„A feature high up in the atmosphere just to the west of Europe will be responsible for hurling several storms eastward early next week,” said AccuWeather Meteorologist Tyler Roys.

Each of these storms will bring with them a round of heavy rainfall and burst of stronger winds.

„A swath of 50-100 mm (2-4 inches) of rain is expected from southern Portugal and southwestern Spain through western France and into the British Isles into Wednesday,” said AccuWeather Meteorologist Rob Richards.

While wet weather could start in northwestern Spain, western Portugal and Ireland on Sunday night, the heaviest rainfall will likely wait until Monday and Tuesday.

Exactly where each storm tracks will determine the location of the heaviest rainfall. At this time, the most likely locations are in northern Portugal and northwestern Spain, where an AccuWeather Local StormMax™ of 150 mm (6 inches) is possible.

Much of the Iberian Peninsula, outside of the far northeastern part of Spain, has been abnormally dry in autumn and could use the rain.

„There are slight drought conditions across parts of Portugal and western Spain, areas that could really use the upcoming rain,” said Roys.

These drought conditions have helped trigger the development of wildfires across the Iberian Peninsula through the summer and into early autumn.

Before the rain even arrives, some residents may experience a surge of gusty winds Sunday night and Monday.

Widespread wind gusts of 64 km/h (40 mph) could extend from Spain and Portugal through western France and into England, Wales and Ireland. Even faster wind speeds are possible, but the exact timing of the strongest gusts, like the heaviest rain, will depend on the exact track and timing of each storm.

Isolated power outages and travel delays could ensue with the onset of these winds. However, it is possible for winds to become even more impactful.

„It is not out of the question that one of these storms could strengthen enough to become a windstorm. However, the complexity of the pattern makes it difficult to tell which one,” Roys explained.

Should one of the storms strengthen enough to become a named windstorm, it would likely pack wind gusts of at least 80-97 km/h (50-60 mph), especially at windward facing coasts and at the higher elevations. Winds of this magnitude are capable of causing tree damage and power outages, as well as dangerous cross-winds for travelers.

The last windstorm to hit Europe this season was Storm Alex, which struck at the beginning of October. Damaging winds and flooding rainfall swept through much of Europe, including in France and Italy where mudslides swept floodwaters through towns. Between the two countries, at least seven people were killed due to the storm’s impact.

Storm Alex also brought unusual weather to Paris during the time of the rescheduled French Open, as well as torrential rain to the British Isles.

The U.K. Met Office confirmed on Friday that the rainfall from Storm Alex on Oct. 3 set a new record for United Kingdom. The agency said the storm produced so much rainfall that it would have been enough to fill all of Loch Ness.

Back in August, AccuWeather meteorologists predicted that several windstorms could impact western Europe this season, before the meat of the windstorm season gets underway in winter.